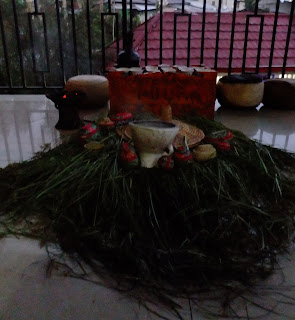 On day five we left beautiful Lalibela and headed for Gondar, the city of castles. We met a nice woman from Spain, Pepa, at the airport and split a taxi with her. We took her recommendation for accommodation and followed her to the Genetics Guesthouse (we're not sure why it's named Genetics, please alert us if you see our clones).
Pepa invited us to join her and a friend of a friend, Kibru, who is a guide in Gondar. We chatted over drinks about what there is to do in the city and then decided to continue our conversation over dinner. We ate at another traditional restaurant called the Four Sisters. When we approached the restaurant, a guard announced our arrival using a horn so that when we turned through the gate their wait staff was ready to greet us! We watched a traditional Coffee Ceremony, had a bucket of steaming coals with incense placed at the foot of our table to ward off mosquitoes, and split the National dish. This included more injera (spongy flatbread), beef tibs (fried meat with onions), lentil soup, sauteed onions and carrots, pickled beets, and much more. All accompanied by more Tej.
Kibru was very open and easy to talk to about religion and politics in Ethiopia. We found it interesting that in a Nation were the people are proud of the place as the origin of man and coffee, and (one of) the oldest civilizations, dating back 10,000 years, that the majority of people, including the young and well educated, would discount this history by saying the earth is 5,500 years old. However as he put it, "the church tells you what is right and wrong, in school they teach you what science says, and you choose what to believe."

(Above: Coffee Ceremony, Below: Dinner and Tej)  We walked back to our hotel in the darkness admiring the stars. 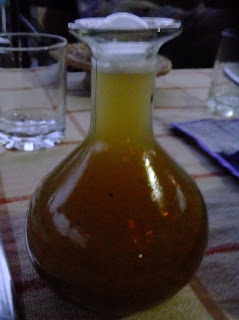 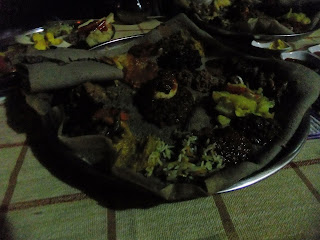