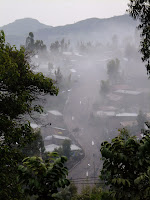 We slept last night with the sound of thunder echoing through the valley, and rain against on our tin roof. We awoke at dawn to the chanting of monks in prayer announcing that today is the Holy Day celebrating Mary. Our first look out the window showed the clouds rolling between the hills, through the village in the valley below, so we quickly got ready and headed out to observe the ceremony at the ancient churches we had visited the day before.

The toque Craig thought he wouldn't need 'til Nepal and the down jacket Erin debated bringing for a week before the trip came in handy to block the biting dampness in the air.

Upon reaching the site, the crowds of people covered in white shawls standing all around the biggest of the rock-hewn churches was such a sight to see. We tried our best to be respectful, and thus, didn't take any photographs during the service.

After mass, we headed back out to see the second group of churches. As lovely as yesterday was, we felt interrupted by our guide's constant stream of information. So we decided to venture out on our own today, despite warnings in the guide books that it is easy to become lost in the maze of tunnels. We were rewarded with a reverent experience. Walking softly through the tunnels and in and out of the churches alone, save for one other couple and their guide, proved to be a much more magical experience. 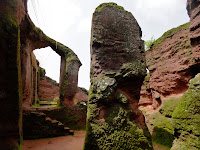 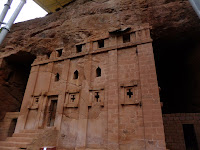 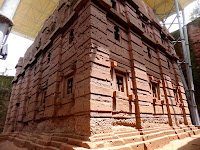 We saw the most intricately carved church of the group, Biete Ammanuel, and one that is accessed from above by a sort of drawbridge across a deep trench. Best of all was the one we saved for last, Biete Ghiorgis. This church stands alone from the others and is carved in the shape of a cross. We arrived early (read before we were allowed) and sat on the hill above looking down and marvelling at its beauty during the guards lunch break, leaving us alone with the site as thunder clouds once again roared above us. 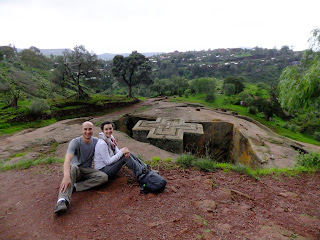 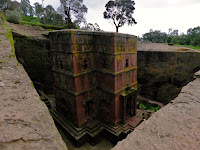 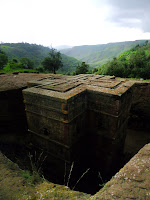 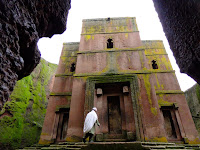 Undeterred by the impeding storm we hiked further up the mountain for dinner at what can only be described as one of the most beautiful views either of us have enjoyed without having to spend the better part of a day hiking. We had our predinner drinks soaking up the beauty around us and then were forced inside by a torrential downpour, that sadly obscured the view and the sunset. Craig was also dismayed when he learned he forgot to put the memory card back in the camera and was thus left with only the internal memory, which can hold 8 pictures. Thus there was a lot of fretting over which pictures were the best.
To finish the day off we went out to Torpido Tej House to sample various honey wines with an American couple we met. Part way through the night and our glasses of Tej, more accurately described as a potion jar, they started playing traditional music. We soon learned that the songs were comedic in nature and that the visitors were generally the subject of the songs. The song sung to Erin contained lyrics concerning how beautiful she is and then she was pulled up to dance again. Craig's song got a lot more laughs, we are not sure what it was about.