Day Six: A Little Bit of Everything

On day six we woke up early to head to Wunania in the mountains. The drive was promised to be beautiful but coming from Lalibela, we felt it was a disappointment and our expectations were dramatically reduced for our hike. However when we pulled off to the side of the road at the top of a pass, the view that lay before us was outstanding. We hiked for a few hours along a ridge overlooking many gorgeous valleys, with Craig always lagging behind to take pictures. 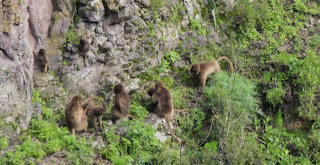 Along the hike we spotted Gelada Baboons and Black and White Colobus Monkeys, our first wild mammals of the trip. It was amazing to see them scrambling along the steep cliffs, keep at bay by children sitting on the opposing ridge, yelling at them to protect their crops. Along the way we had to avoid goats, donkeys, bulls, and sheep. The children herding the animals would sometimes break off and follow us for a while before returning to their flocks.

We reached the end of our hike at a summit high above the surround valleys with a great panoramic view, a little tired, but our day was just beginning. 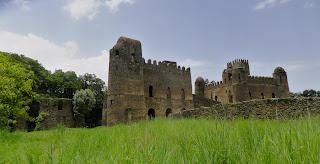 After the hike it was off to the main sites of Gondar (Lalibela, see days 3-4, used to be named Roha, Tolkien liked to steal Ethiopian city names). First stop: the royal enclosure, known as the Camelot of Africa, but because there is not a Camelot of somewhereelse, it should just be 'Camelot'. The palaces were amazing, and our guide was not too pushy so we were able to wander off on our own. When we did listen we learned some interesting facts about 16th century Ethiopian kings: The one that is "the Great" raised taxes 10 fold,  and another instituted laws to protect animals which we observed are no longer being followed in Ethiopia (i.e. Donkeys cannot carry incredibly burdensome loads, and you cannot carry chickens upside-down). 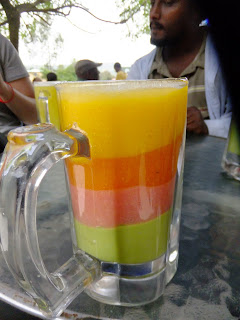 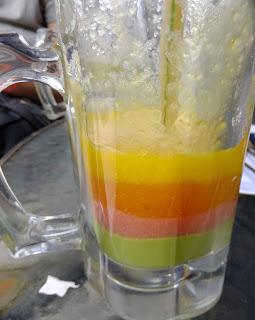 The second stop, after a 3.5 km walk through town and the pictured above juice stop (from bottom to top: avocado, guava, papaya, and mango), was the baths. The most stunning feature of the baths are the tree roots growing over the walls. 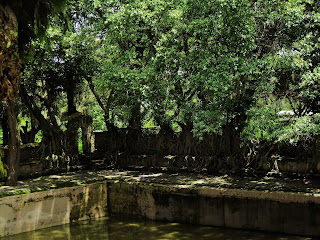 Slightly exhausted by a long day of hiking,  as we were, the baths' green shallow water did not tempt us and we opted for a tuk-tuk to get to our last sight of the day, an old church. This proved to be rather scary, the ride not the church, as the tuk-tuk tended to veer right unexpectedly. The church itself had interesting paintings, but was otherwise unimpressive. Erin nearly made the faux-pas of using the front door to the church, which is men only (she should be happy she was even allowed in since many churches in Ethiopia do not allow women). 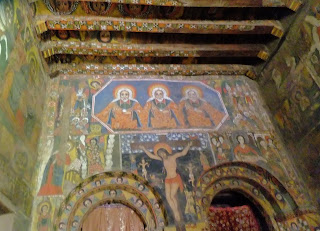 At the time of writing (delayed publishing due to internet issues) we sat waiting for a sunset, which would never arrive as the clouds were rolling in again, and sampling our third different Ethiopian wine, a sweet red.
Posted by Craig & Erin at 4:28 AM