Eager to move to another hotel, we set out to arrange our transport for the following day to get to Bwindi National Park (to see gorillas), so that we could relax the rest of the day. Our plan was to go to the nearby Lake Bunyonyi and hope for a quieter stay, but we ran into a lovely couple from the Netherlands and Germany (Selma & Adrian) who were trying to get to the National Park that morning and decided to hitch our wagon to theirs.


Our quest for a driver took us to the taxi park where we were fed on like vultures eating a kill. Drivers hounded us for business, and we did our best to negotiate for cheaper rates. We knew the road would be bad, and we would need a capable vehicle and driver (the book advises that you take a 4WD), so the offer to get in the back of a pick-up truck with twelve other people was tempting. As we watched our new friends try to arrange transport for the day, and we tried to secure it for the next day, it became apparent that the best plan was to spilt a special-hire taxi together. The thought of getting as far away from the sounds of the city and into nature was so tempting, that we decided to go right away. We ran back to grab our bags and after tipping the taxi driver to help get Adrian and Selma's bags untied from the pick-up, we were on our way. Or so we thought. We had a few stops that gave us a view into our driver's life: first was a stop to pick up his phone at the phone repair store, next it was to a gas station to pick up his jacket from a passerby on the side of the road, and the last stop was at his house so he could tell his wife he'd be gone for the day.

The drive was beautiful once we entered Bwindi Impenetrable Forest, and we took turns sitting in the front seat so we could have a view (the windows in the back were all tinted adn did not open). Once the rain set in, driving became precarious. We stopped numerous times for him to check under the hood, he explained that there was water in the engine on the wires and it was problematic.

The problem it seemed was on uphills, we could hear that the car was having trouble shifting gears. It wasn't much longer until we found ourselves stopped on a steep hill in the rain and mud, and he told us that we would have to push. It was tough work running up the hill pushing the car, getting sprayed with mud, but when we arrived and were shown our accommodation. All the hard work was worth it. 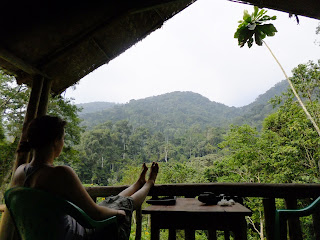 After a three course dinner we sat around a fire and talked with other travellers over a few drinks before going to bed in complete darkness and with only the chorus of night birds and insects.
Posted by Craig & Erin at 5:23 AM