Day Eleven: An Intro to Animals 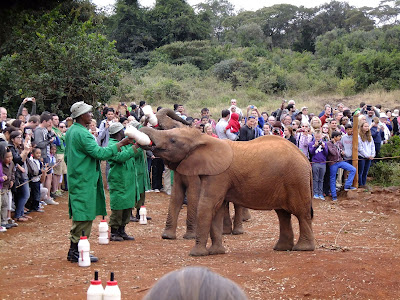 Feeling refreshed, we hit the road (again on our good ol' Matatu 46) and went back downtown to find a bank. With dismay we realized that it was Sunday and no banks were open (and we were turned away from the Hilton being told they only exchanged with their guests! Not sure how they knew we weren't staying there...). Outside the hotel, the doorman caught wind of our predicament and nodded us in the direction of a nearby security guard. He told us not to worry, that he would change our money for us. Hoping that we weren't breaking any laws, we completed the transaction on the street corner, and were on our way again.

Our first stop was the David Sheldrick Rescue Centre dedicated to saving orphaned elephants, raising them to good health, then reintroducing them to the wild. We learned the story of each elephant, usually that their mother had been the victim of poaching, and they were found beside her dead body close to starvation. We watched them being bottle fed by their beloved trainers, and they played a bit in the dust and waterhole provided. The most exciting part was when the trainer led one (by holding out tasty leaves) along the fence line and Erin got to pet it. It was super hairy and prickly! 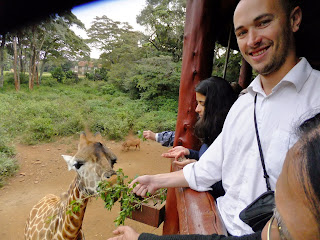 Next, we moved on to the Giraffe Centre where they breed the endangered Rothschild giraffes and reintroduce them to the wild. There are only 50 left in the world currently, so this centre is very important for their survival. There are three areas of Kenya where they can be found (we'll be going to one area next week, so fingers crossed!). At the centre we got to hand feed them from a platform, and even pat one's head!

Then we stocked up on snacks and drinks, and made our way back home, Matatu 46 failed us again by taking a detour around where our road is, but after a good walk/workout, we found our way.

Now (Day 12) we're all ready for our safari today! We'll post again in a four or five days with hopefully tons of amazing animal photos.