Day Twenty-Three: Partying in Our Sleep

We left our spacious, ant-filled room this morning to catch a matatu (shared taxi) into Kampala. After many frequent stops to pick up and let people off, we arrived at the bus station. A kind woman in the matatu directed us to where we needed to go so we could shake off the throng of men trying to get our bags and help us on the bus (ten steps away) for a tip. We had to separate to find seats and were quickly on our way.

After a half-hour navigating Kampala's famous traffic, we stopped for gas and a "short-call," or quick stop for services. Erin experienced a new "bathroom" where women squatted together in an open-aired cubicle. The floor sloped downward into a trough, and was, well, wet. She was thankful to not be in flip-flops! 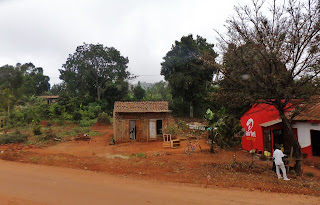 The rest of the five-hour bus ride was squishy and uneventful. We found a run-down hotel close to the bus and enjoyed a late lunch at a nearby (nicer) hotel. English was harder to come by and wi-fi near impossible to find.

Exhausted, we hit the sheets at 8pm, hoping that the severe thunderstorm would quickly quell the enthusiasm of the locals who were blaring loud music. By 3:30 am, it was clear they were not going to stop partying, and the rain had long since left. We finished our game of Settlers Cities and Knights on the tablet and finally were able to sleep at 5 when the "club" shut down.
Posted by Craig & Erin at 5:16 AM