Day Twenty-Seven: Most Expensive Day of the Trip

We awoke early to have breakfast and then it was off in search of Mountain Gorillas. We learned that we would be tracking the Mubare group, the first group to be habituated. The group had been going through a rough patch recently with the old silverback passing away in June. As he grew weaker the group lost many members and by the time of his passing was down to only three, his son and two females. Clearly his son, the new silverback, had some work to do. In the few months that have passed the new silverback raided other groups and grew his family by showing other gorillas that he was way cooler and tougher than their silverback. Today the group is nine members strong with at least one of the females pregnant.

We also learned that we were not to approach the gorillas any closer than 7 meters, a rule that must be followed at all times... 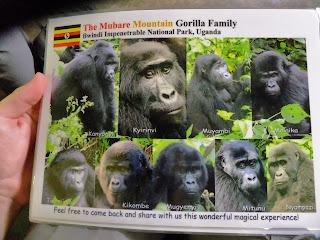 Our hike began at a local primary school, working its way up a ridge through the land that had been purchased for the Batwa people after they were forced to leave the national park. The path was good, the climb steep and the sun was very hot. We had prepared ourselves for a hike through pouring rain and mud, and thus found ourselves sweltering. After an hour we crested the hill and got a good view of the park boundary. Lush tropical forest on one side and a burnt field with grazing cattle on the other.

Shortly after we were heading down into a valley, we heard the crackle of our guides walkie-talkie, "The gorillas are close." At this point we left our well maintained hiking trail and descended into the the darkness of the dense forest. trampling over and through bushes and thorns, sliding down muddy slopes, and hanging onto vines in the faint hope that they would somehow help us stay on our feet.

In a small clearing we found the trackers, and we could see the trees and bushes moving, and hear the cracking of stems as gorillas fed mere meters from us hidden in the undergrowth. Here it was time to leave our bags and hiking poles, and have our last sip of water before approaching the gorrilas.

We hiked another 5 meters and rounded a corner to find the silverback sitting infront of us, much closer than the 7 meters we were told before. Our first gorilla sighting was a lot closer than expected, as you can see from Erin's face. 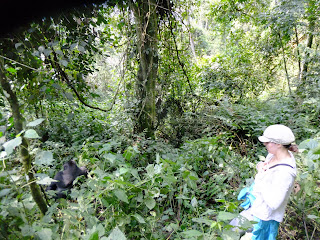 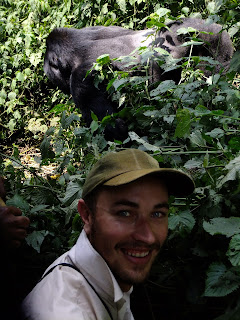 The next amazing hour was spent following the family through the woods, sitting and watching them, often just a step or two away from us (it was the trackers and our guide that encouraged us to get closer). The highlights were:
* our many close encounters with the silverback, including him standing proudly in front of his troop.
* a young female charging Erin (who wisely shrank into the defensive "ball" position on the ground with Craig draped over her) it stopped just 5 feet in front of her, brushing against us as she passed. (Video is shaky and underwhelming)

* Seeing the whole family together, and then having the silverback charge through them.

* Sitting in a small clearing as the family ate around us.
* Our guide saying he really liked the name Craig and if he has a son next will name him Craig. (He named his daughter Sasha after a woman he lead to the gorillas) 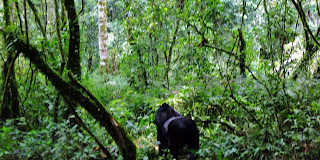 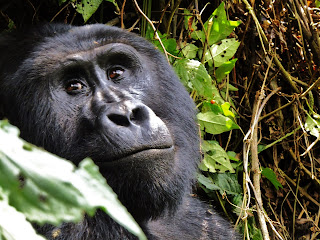 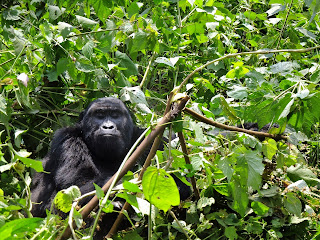 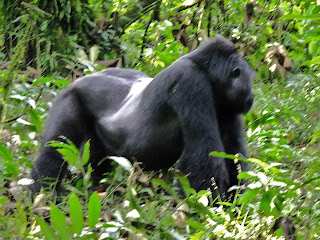 After 70 minutes our 1 hour was up and it was time to go. The hike out was easier and we exited the park walking down a ridge through banana plantations and small hamlets. It was interesting to see people working the steep terraces and making mud bricks, but the poverty was very pronounced, and at times heartbreaking.

Our day once again ended watching the moon rise over the jungle from our perfectly situated porch.
Posted by Craig & Erin at 5:27 AM