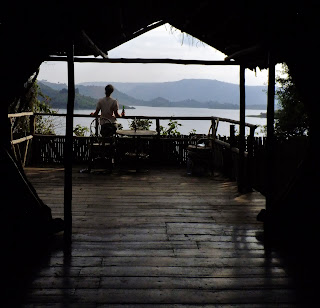 The geodome was one the most interesting room we'd ever been in. It was spherical (except the floor, as the name would imply), with the ceiling/walls covering about 75% of the sphere. Then it opened up to nature. The billowy mosquito net and thatched walls left a Bali-type feel to the whole thing. When lying in bed you could see the whole room leading right out to the deck, with views of the sky and lake beyond. There was a small triangle cut out of the thatching just above the bed that was covered with clear plastic so you could see more stars and the moon at night.

Although the room was paradisical and the bed more than comfortable compared to what we've been sleeping on, it was difficult to sleep merely for the fact that it was too exciting to be able to see outside the whole night. We kept waking up and peeking above the sheets to see what stars were out, what the hills looked like in the changing light, and if there were animals rummaging through our bags.

The next day we had to move to a cabin due to booking and monetary concerns. Our cabin looked like it could fit a family quite cosily in winter. With wooden walls and a ceiling made of bound reeds, it was airy with all the windows open, yet nice and dark for sleeping with them shut. We had a large deck, tables and chairs and a less impressive view of the lake. Our ensuite was a ways behind the cabin, but this is usually best when it's a composting toilet. Like our geodome room, the shower boasted views of the lake and the water was heated by solar power.

Having said goodbye to our friends Adrian and Selma the day before on the mainland, we were surprised to see them arrive outside our doorstep heading to set up their tent. We were pleased for more of their company, and enjoyed playing games with them in the afternoon.
Other than that, our day was filled with attempts at internet and eating delicious food and drinking bad wine overlooking the lake.

Our next few days at the lake were relatively uneventful. We tried to book flights and accommodation through the solar-powered internet, much to the dismay of other guests and staff. We played games and ate lazily. The best part was meeting back up coincidently with many people from earlier in our travels. Most of the people we met in Bwindi ended up there (Adrian & Selma, of course, another German couple we met, a French/Bulgarian couple who had lived in Peru for many years and now live in Rwanda). We also saw a British family who had been at our hostel in Nairobi, and Nicholas, a French guy who we met in Lalibela, Ethiopia! It was fun to connect with so many other travellers, most people relaxing for a couple of days before heading back home and back to work or studies.

We ended up leaving a day early as we received (Erin asked for) the opportunity to hitch a ride to Kigali with the French/Bulgarian couple in their "tank" of an SUV. It made our travel day much easier when we would've had to go canoe/motorboat-taxi-bus to the border-walk across the border-find a bus on the other side-change buses in Kigali. We still got a workout from walking across the border with all of our bags (through the longest no-man's land we've ever seen), uphill, but we made it, and were excited about the new experiences to come in another country!