For our second full safari day we rose early and headed out to be on the plains for sunrise. We passed many hot air balloons lifting off, and generally had the roads to ourselves. With three of the Big Five under our belts, our goal for the day was simple: we wanted to see a kill. At times we felt guilty for our morbid wishes, but our desire for action won out. 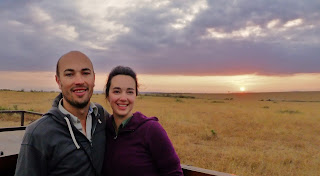 Within our first ten minutes we came across a lone car parked beside a field of tall grass. A single wildebeest stood in the field and the riders were all staring at it with interest. Sensing there was more to the scene than we could see, our driver parked a ways away. As we watched, the face on a lion appeared through the grass directly behind the beast. Our hearts races with anticipation then the wildebeest turned, saw the lioness, and raced off across the field. To our disappointment, the predator didn't chase. We moved on feeling exhilarated. 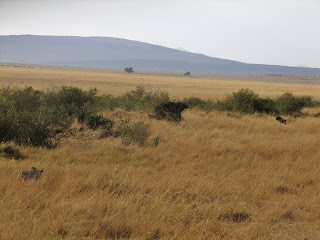 Shortly after, we came across another lioness walking purposefully through the grass. A small herd of wildebeest stood close by this time. With no other cars around, we settled in to 'be patient'. A car eventually approached, and we cringed as it interfered unknowingly with the scene. Sadly few other drivers seemed to have the same sense as ours. They had not seen the lion yet. Undeterred, she soon continued stalking closet focusing in on a youngster that was wandering away from the rest. It wanted to cross the small creek and join the animals on the other side so it kept whinnying and galloping in that direction. The lion took the opportunity and emerged from get hiding place. The others saw her and began running in the opposite direction. The lioness gathered strength and started running but was more in it for the chase than the kill and she let the baby run right past her without much of an effort to bring it down. Lucky wildebeest, disappointed us. 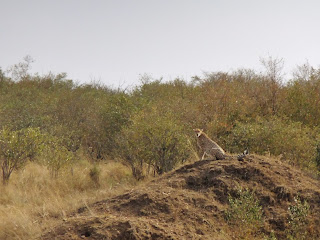 The rest of the morning continued with little more excitement till we spotted birds rising up from the grass, squawking with annoyance. we knew there was something there. We waited patiently and were rewarded with a female cheetah who strut through the grass to a tall mound. While we watched the elegant creature our driver told us how last month a similar thing happened. All the other cars drove close to her as they were doing now but he kept his distance. Disturbed by all the people, she eventually got down of the mound, walked towards his car and leapt up into the roof. Cheetahs aren't dangerous to people and she was only searching for a good viewpoint to look across the Mara, so those passengers received quite the treat! Today we had no such luck, but were happy with such a great vie of the regal cat. 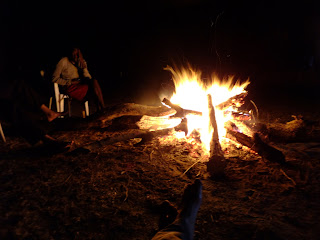 Once again we ended the night by burning a few trees (that we were assured came from far away from any conservancy area) and went to bed nice and toasty.