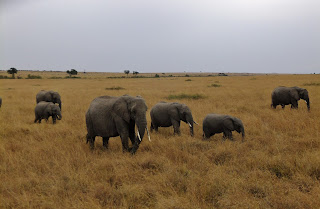 For our first full day of safari, we got up and ate a delicious breakfast prepared again by our talented cook, Joseph. Then we headed off for a full-day game drive. 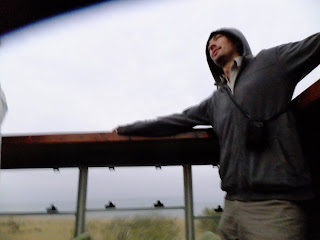 In our beloved army car, with the roof down, we were all able to stand on the seats and stick our heads out the top, holding onto the sides for dear life. We rocked and bumped our way down rough 'roads' and through river crossings, our bodies slamming against the sides of the roof openings. At times we nearly had the wind knocked out of us, but there was no comparison for how free we felt with the breeze on our faces and the open plains in front of us. 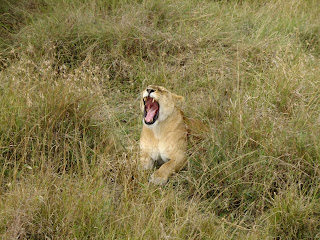 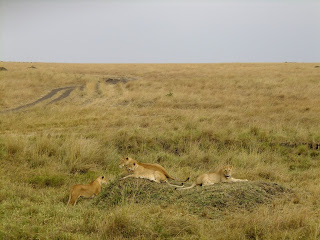 The company we were with was called Gametrackers and our driver insisted he could 'smell' out the action (though he did seem to spend a lot of time on his cell phone talking to other drivers). What was fun was that he encouraged us to spot things even if he knew what was where. He was also passionate about animal conservation and respected the animals' space. He lectured us on patience and tried to read the animals' movements so he could predict where they would be, so we often waited in spots away from other cars and the animals walked right to us.

We saw lots of the same animals as the previous day, but enjoyed the giraffes, elephants, and zebras (especially the babies!) all the same. We were rewarded early with our first lion guarding a kill, then many more followed. We saw the kill of a leopard hanging in a tree, but sadly, no leopard.

One of the goals for the day was to see a 'crossing', where the wildebeest and zebra cross the Mara River. We arrived at the steep banks of the river, wildebeest amassing on the other side and crocodiles waiting in the water. After a half hour of slow progress to the river the wildebeest got spooked and stampeded away from the river. Our consolation prize was a large group of Hippos hanging out in the sun. But we hadn't given up yet and it was off to another spot to be 'patient' again. 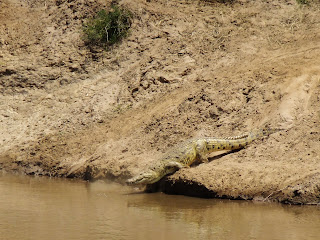 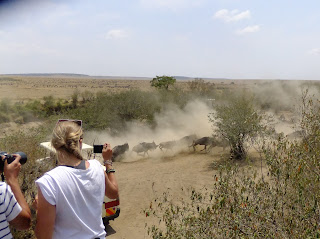 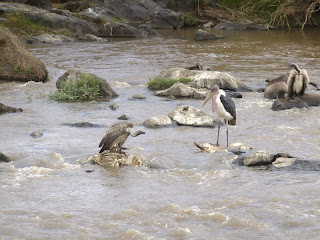 We arrived at another point of possible crossing, the river teeming with the corpses of fallen wildebeests, a reminder of the dangers to any that would attempt to cross. The wildebeests had two paths to choose from, the tourists had two places to watch from. Each time the animals changed their minds a herd of vans would stampede to the other vantage point. After about an hour of this dance some zebras got brave and ran across the water leaving a young one behind braying across the gulf. The wildebeests started to line the shore, it was finally going to happen. The animals were place, the vans all lined up, the first wildebeests began to cross, others following close behind in a line, it was happening. Or so it seemed. Apparently some vans thought they could improve their view just a bit; they all started their engines to move forward five feet, one honking its horn. That was all it took to halt every wildebeest not already half way across the river and send them thirty feet back from the edge. Another ten minutes went by before they started to cross again, this time they all went. It was quite a sight, but sadly (happily for the wildebeests and zebras) the nearby crocodile did not even flinch. 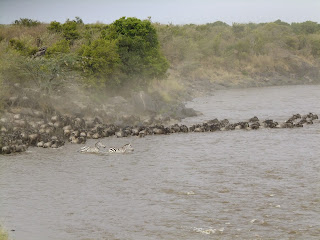 We ended the day on a high note when driving home we came across three male cheetahs stalking wildebeest in a gorgeous field of grass. 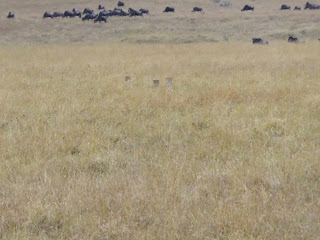 And if a fantastic day of gaming wasn't enough, we went home to a hot dinner and a bonfire that had logs so big they were also our footrests!