Day Twelve - Into the Wild

We waited anxiously for our vehicle to pick us up for our four day safari in the Maasai Mara. We did not know what to expect, would we be in a minibus? a land cruiser? a giant overland truck with 20 other people? What we had not thought to guess was a huge (super cool) army truck, "Acmat," converted to carry 10 passengers that we only had to share with 2 other people. This was definitely a great start to the safari!
The great start ended up getting delayed, as it would seem, when our ride entered the parking lot to pick us up, it broke the barrier arm. The security guards would not let us out of the parking lot unless our driver paid 10,000 KSh (~$125) to fix it. The discussions did not progress, with neither side budging, until finally a trip to the police station cleared everything up and we were on our bumpy way.

Our two awesome companions on this adventure, Mary and Kaitlin (both from Canada), met each other volunteering in Western Kenya for 3 months. Having finished their stint they had moved onto the 'touring' portion of their trip. 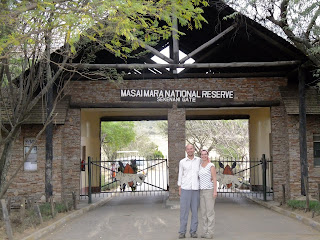 As the drive wore on (our 35 year old truck had trouble with hills, but its unique look turned lots of heads) our excitement dramatically increased when we started spotting animals like zebra, Thompson's Gazelle, and a herd of Masai Giraffe on a forested hillside. After passing through the park gates we spent a few meandering hours looking for game along the way to our camp. We had an amazing time seeing all the animals that would become commonplace over the next few days: Gnu, Elephant, Topi, and a Spotted Hyena. 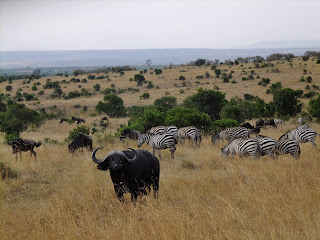 When we booked our safari we had expected to be camping in small cold tents, using squat toilets and bucket showers. So we were again very pleasantly surprised when we arrived and were shown to our 'bandas' (small cabins w/solar powered electricity), then to the hot (read scalding) water showers. Next, the camp manager had us walk a little further, past the outhouse, to the flush toilets. We ended up almost never using the flush toilets because they were farther, and our camp, we were told, hosted a variety of other guests occasionally: elephants, baboons, lions, and the odd hippo. 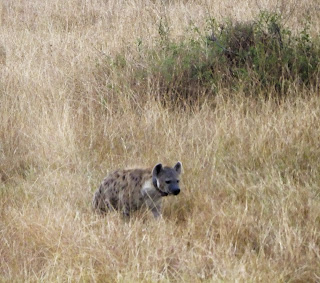 We ended the day with a delicious dinner, gluten-free for Erin, and with a beer for Craig. We were very excited for the next day after such a terrific start! 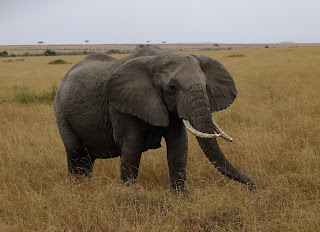