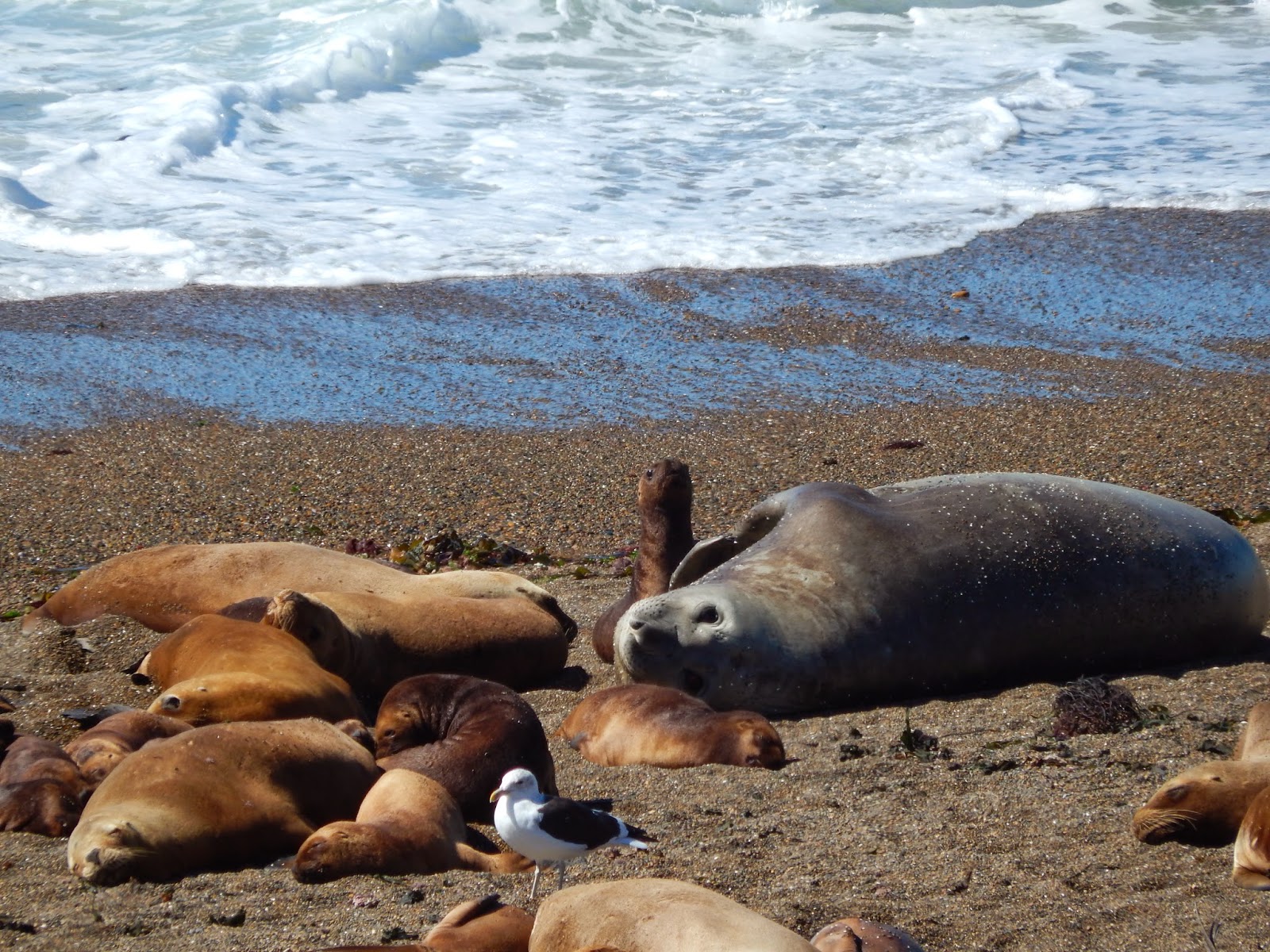 A short bus journey brought us to Puerto Madryn; as we approached it was clear that this would have been a nicer place to recuperate; badlands gave way to city which ended abruptly along the shore of a pristine bay. 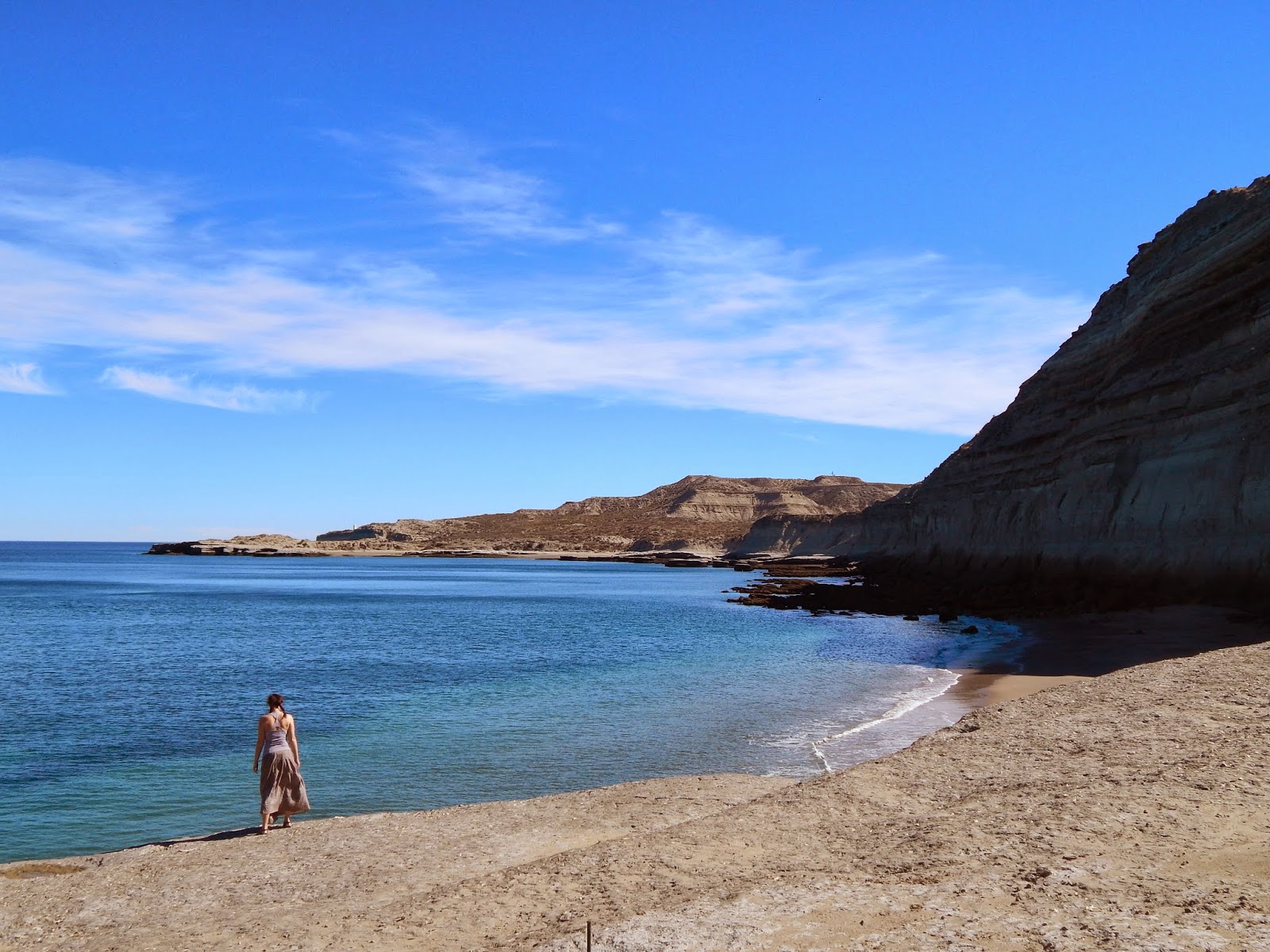 For half the year, thousands of southern right whales call the bay home, but we weren't here for them. From February through April, this is the only place on Earth where orcas intentionally beach themselves to attack the seal and sea lion pups at the water's edge.

The first day was spent figuring out the second day, rent a car or take a tour? When Craig's license went missing (it has since been found) the decision was made for us. We learned through talking with the staff at our splendid hostel that orca sightings had been very rare this year, possibly due to changes in the weather; of the last month and a half of guests going in search of killer whales, the staff had only heard of three sightings. That wasn't a promising beginning.

Our tour left hours after we would have chosen to and did not allot much time to enjoy the stops/patiently wait for orcas to show up, but we really had no other alternative. On our way to Peninsula Valdes, we passed the island that inspired Antoine de Saint-Exupéry's elephant-eating boa constrictor. He was a pilot in Argentina between 1929 and 1931 and he spent hours flying over the endless barren landscape of Patagonia. It's told that he modelled Asteroid B612 after the area and it was neat to see the Little Prince's famous hat! 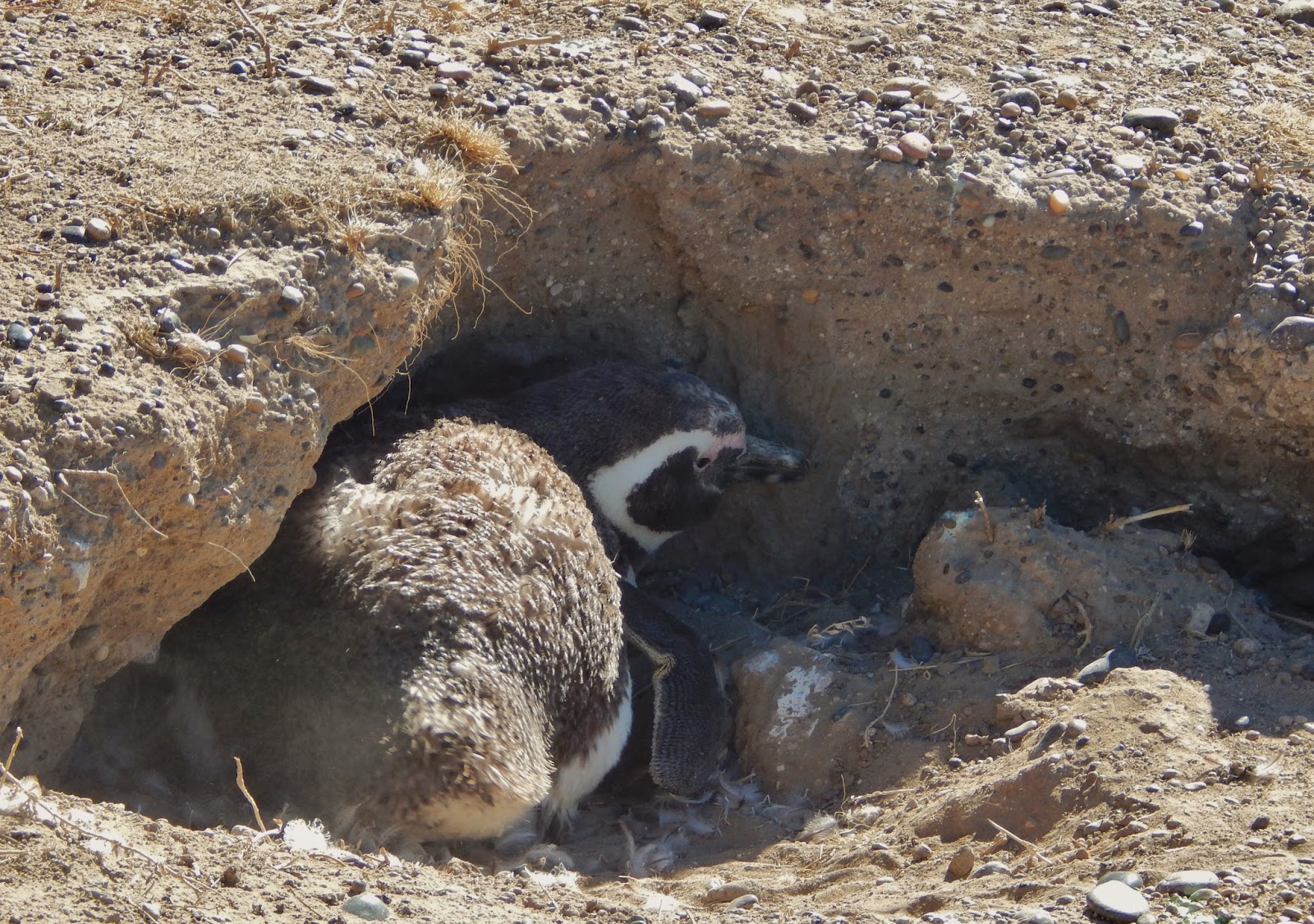 Our first stop was at a Magellanic penguin colony where we were told we'd have 15 minutes. A few penguins were right up by the barrier/parking lot, behind them a dining inlet, a little bit further, the ocean. These were probably the largest penguins we saw, though still tiny compared to the King or Emperor. It was interesting to see them burrow to create shelter from the sun (it was 28°), and like the adelies we'd seen in Antarctica, they were very quiet and gentle. We had about 5 minutes left when a strange sight came barrelling towards us. A park ranger had his siren flashing  wildly. Within moments our driver, Pablo, was whistling to us and waving his hands frantically, trying to round us back up into the van. He understood the siren's meaning and shouted to make sure we reacted with appropriate haste, "ORCAS!" 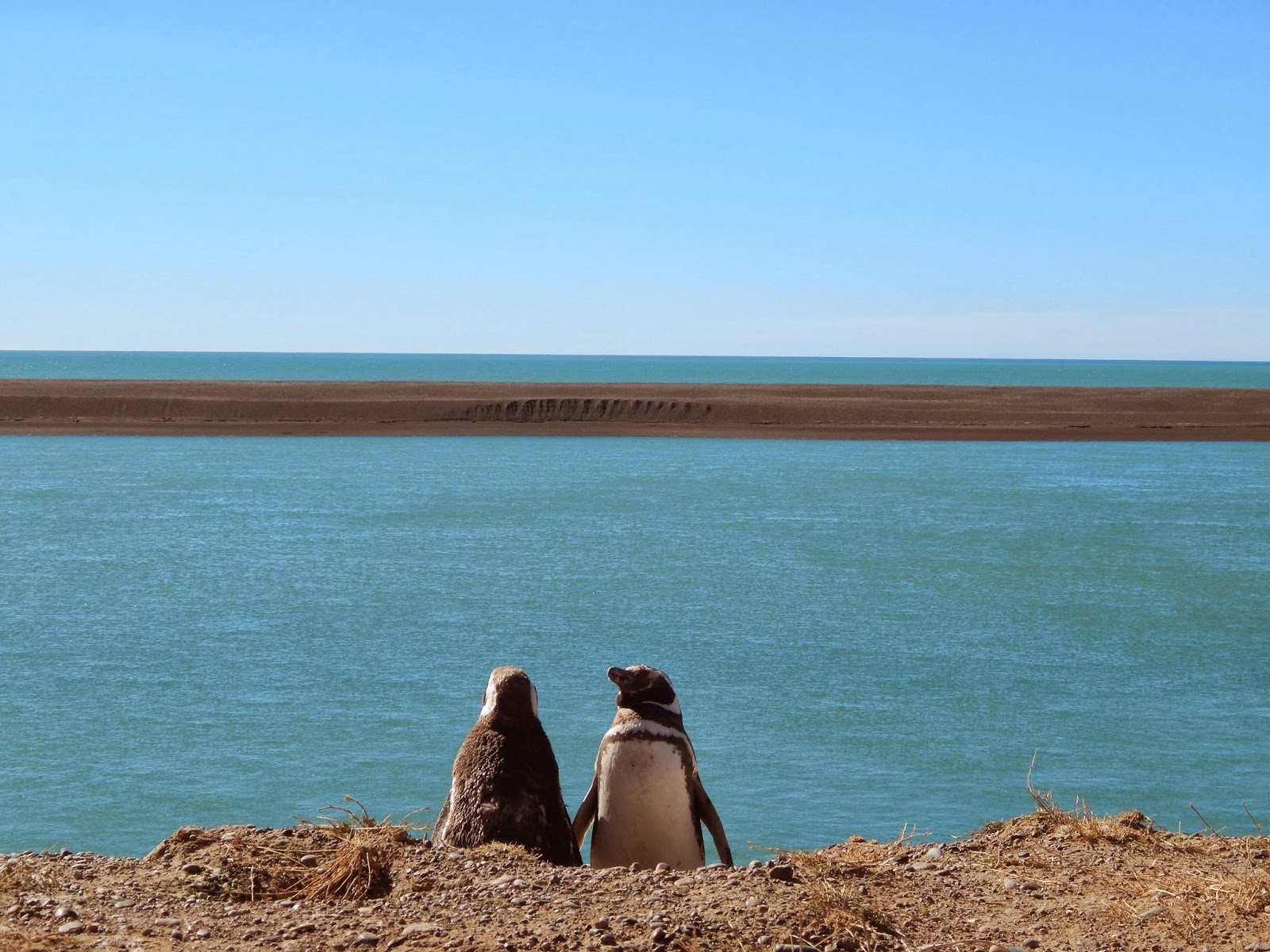 We sped down the bumpy gravel road to a an outlook. The orcas had been seen moving in its direction. We got comfortable leaning over the railing, straining to see around the corner to get a first glimpse of the majestic hunters. In our excitement, we forgot the sunscreen in the van and thus wore more clothing than the sweltering day demanded, with Craig wearing his hoodie as a cape/cloak. 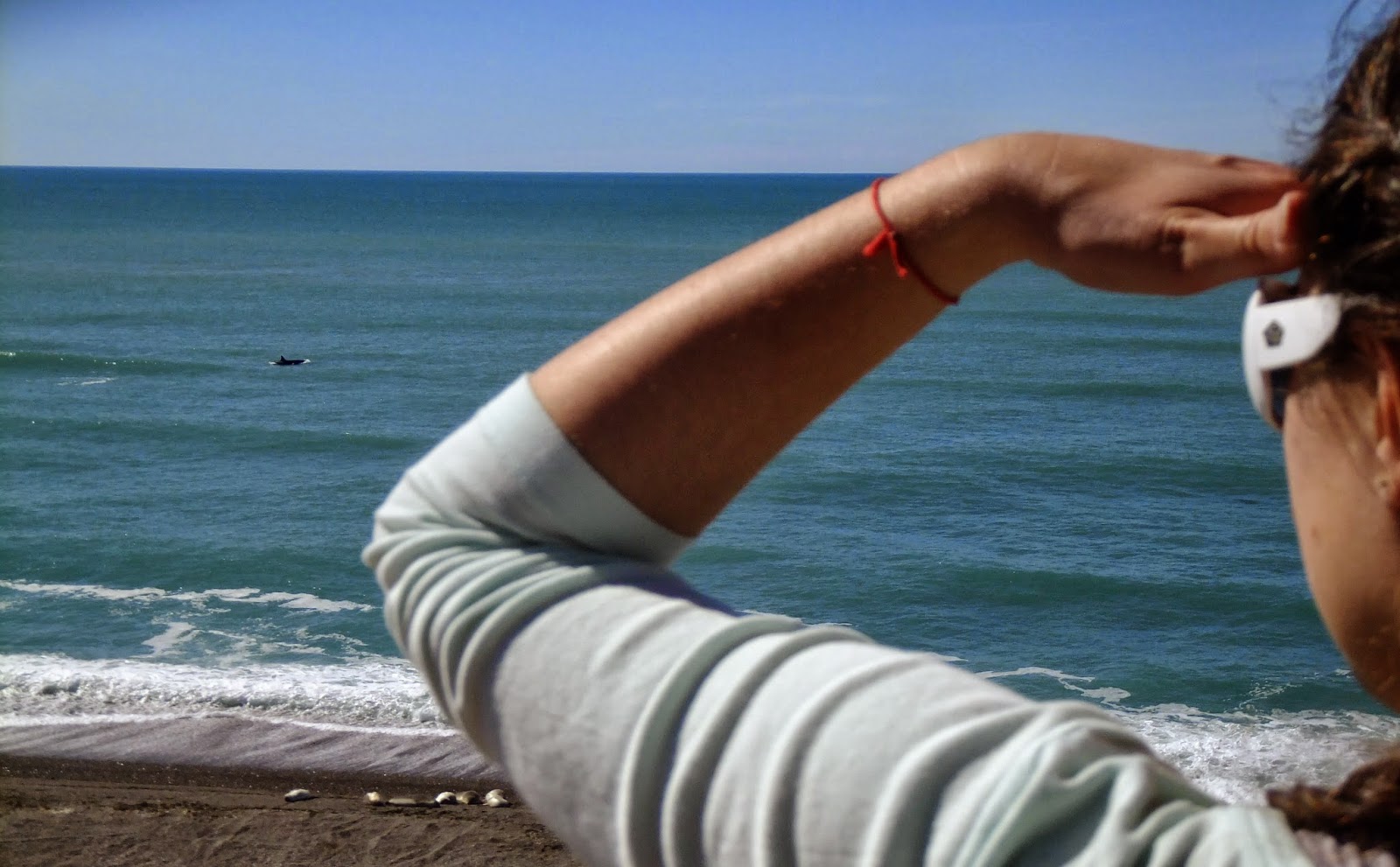 It only took a few minutes of waiting before we could see 6 fins jutting out of the shallow water. To our surprise, they weren't out in the sea, but were swimming along the shoreline.It was three females and three young juveniles. Although there were multiple seals playing in and near the water, we didn't see any attempts on them. But just watching these intelligent creatures so close while they patrolled the beach was magical and goose bump-inducing. You could sense their power as they surfed and rode the waves, and it was chilling to see that ominous fin pointed directly at you. 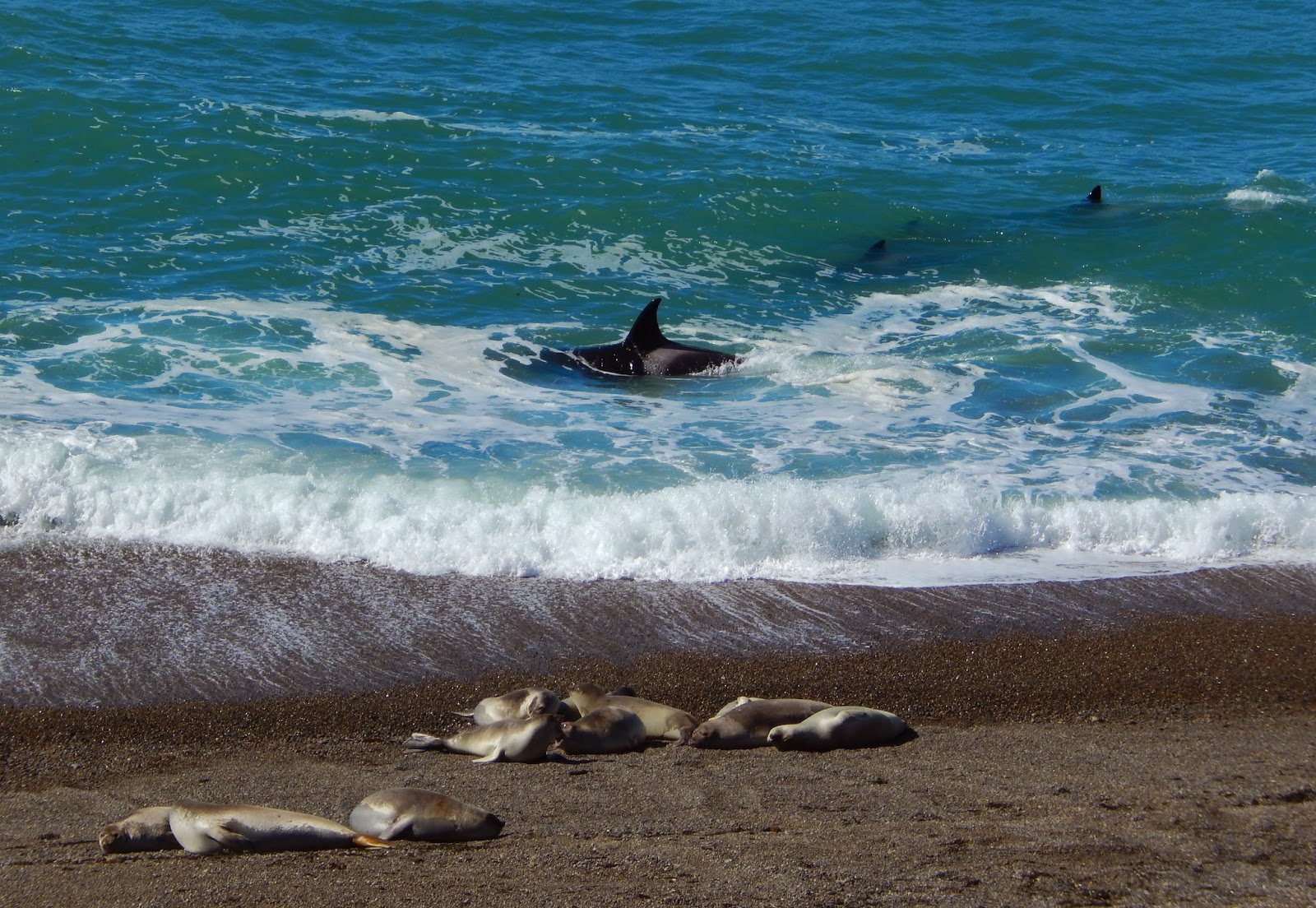 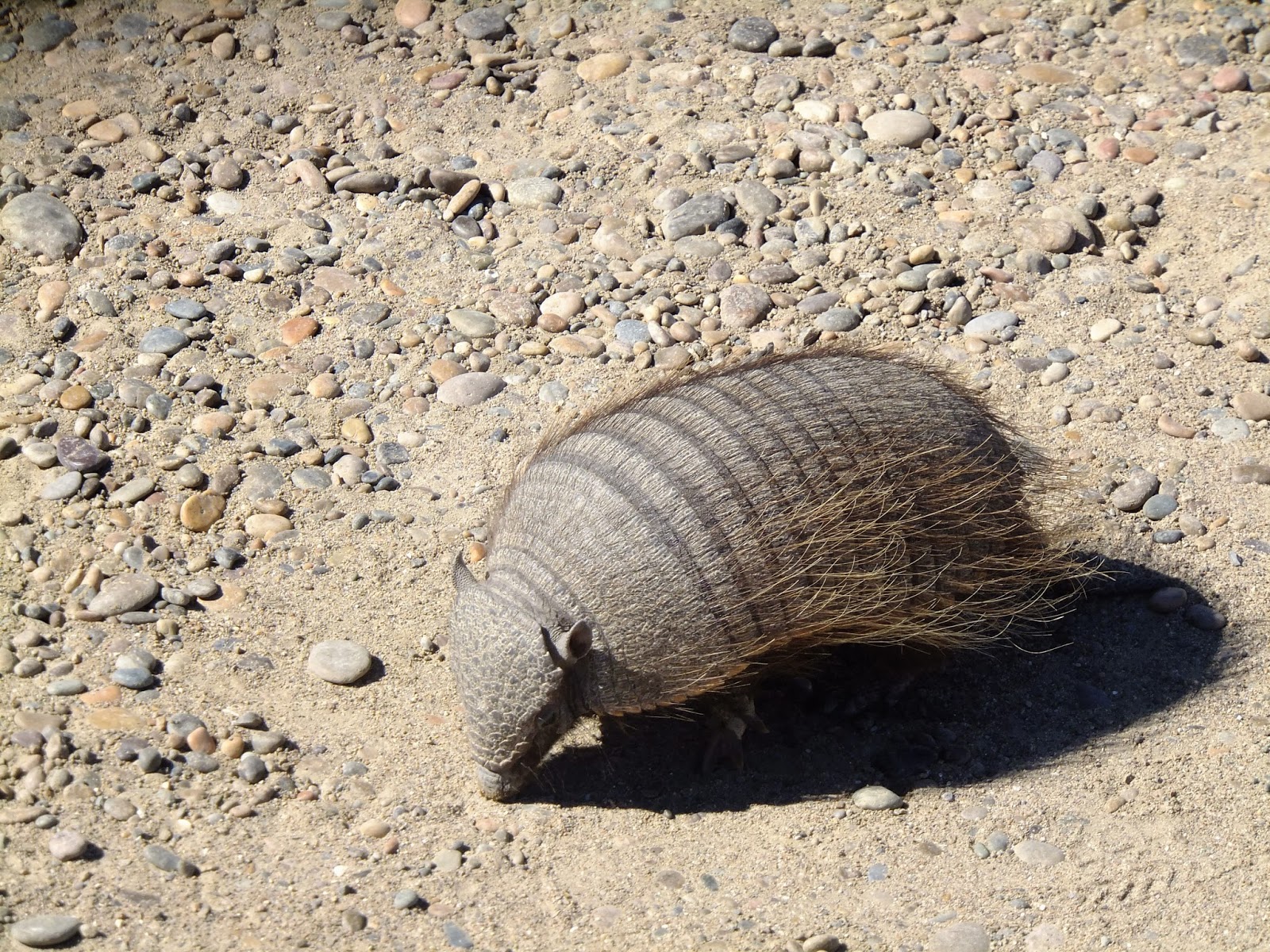 Though nothing could compare to the orcas, we went on from there to see much other wildlife: sea lions, elephant seals, guanacos, rheas, penguins and armadillos. Guanacos are a type of llama, but they have a unique ability among mammals: they are able to survive off sea water.

We were a little frustrated that on our wildlife viewing tour, our longest stop was in a village so people could go to restaurants or do souvenir shopping, but if we had rented a car we probably would have missed seeing the orcas, so in the end, it was a worthwhile tour. 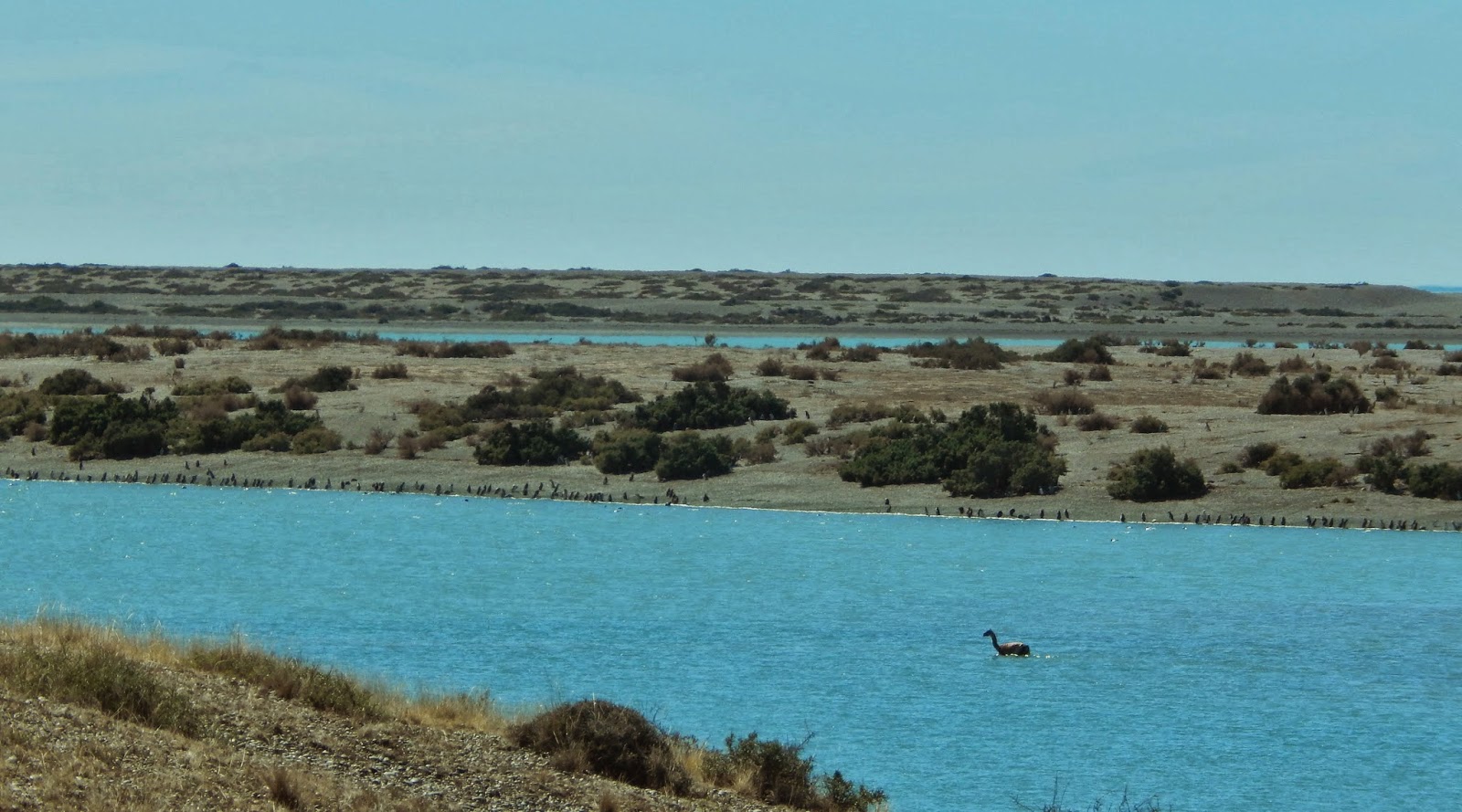