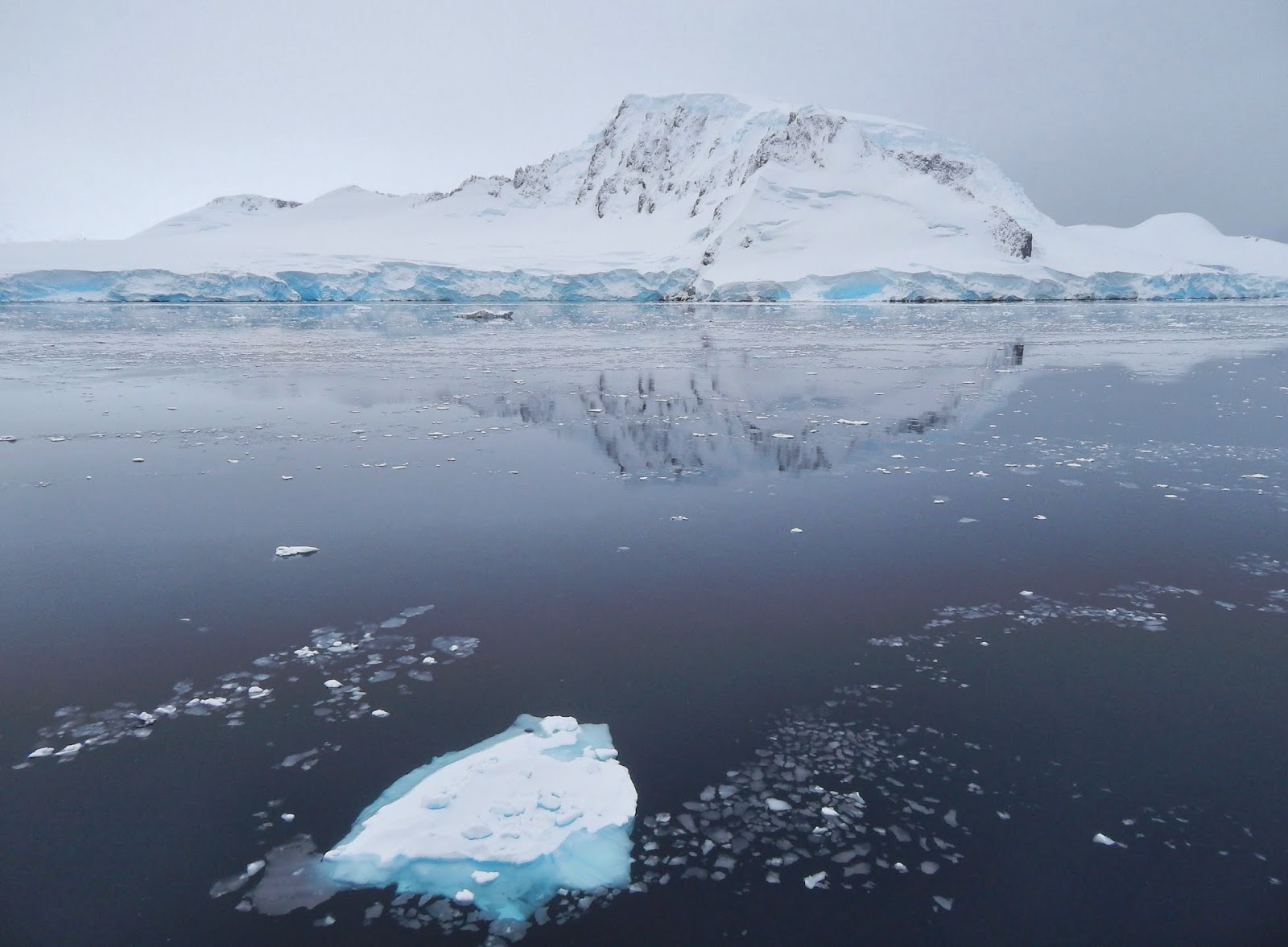 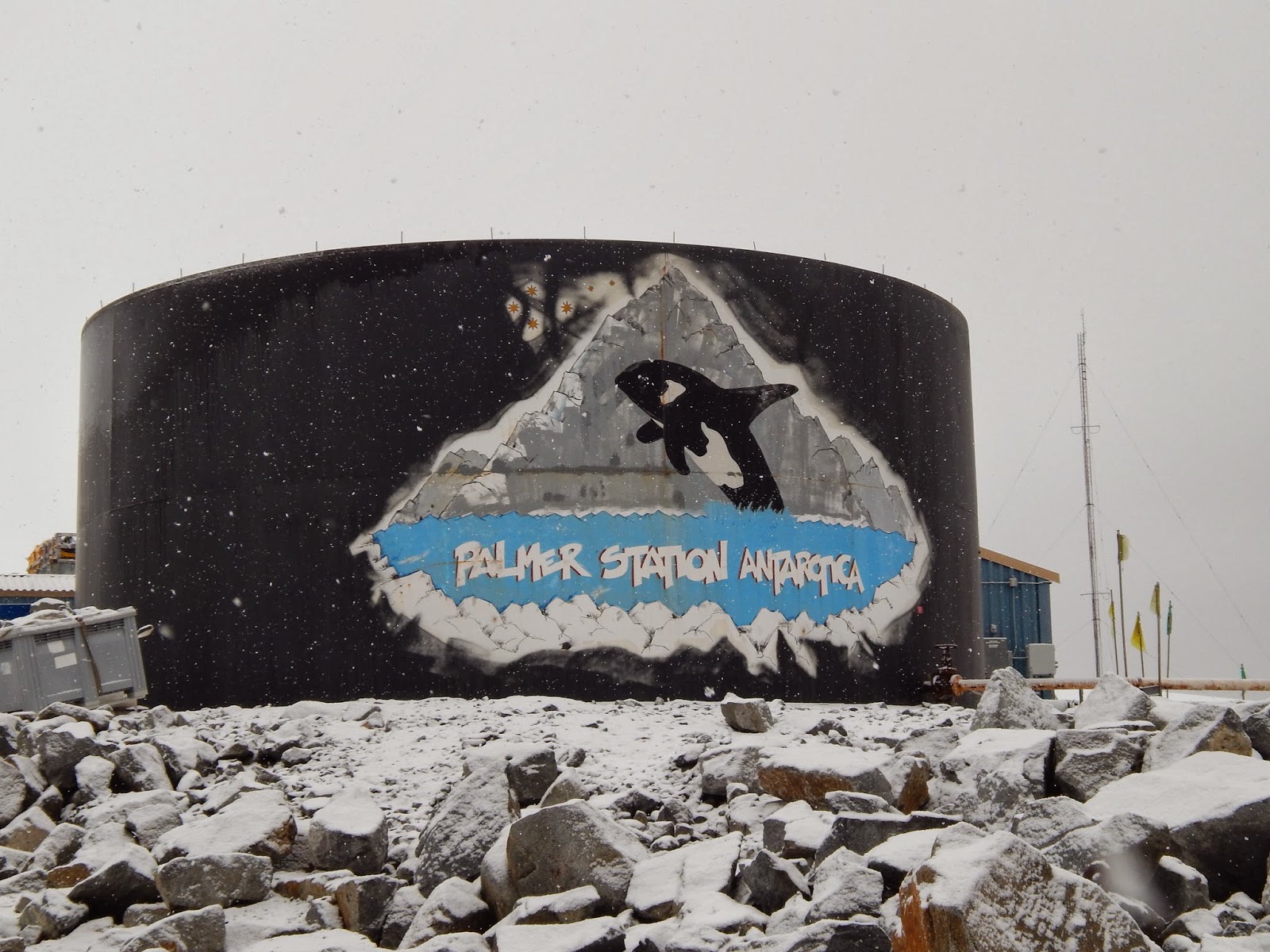 Before we had even had a chance to finish our last bite of bacon, we were being boarded. Scientists from the Palmer research station arrived to give us a quick briefing about the work that they do before we went ashore. It was interesting to learn about some of the projects being conducted on Antarctica, and learn that the smallest land animal is actually a 3 mm non-flying insect that spends almost its entire life in the larvae stage. It can be frozen solid and still live! 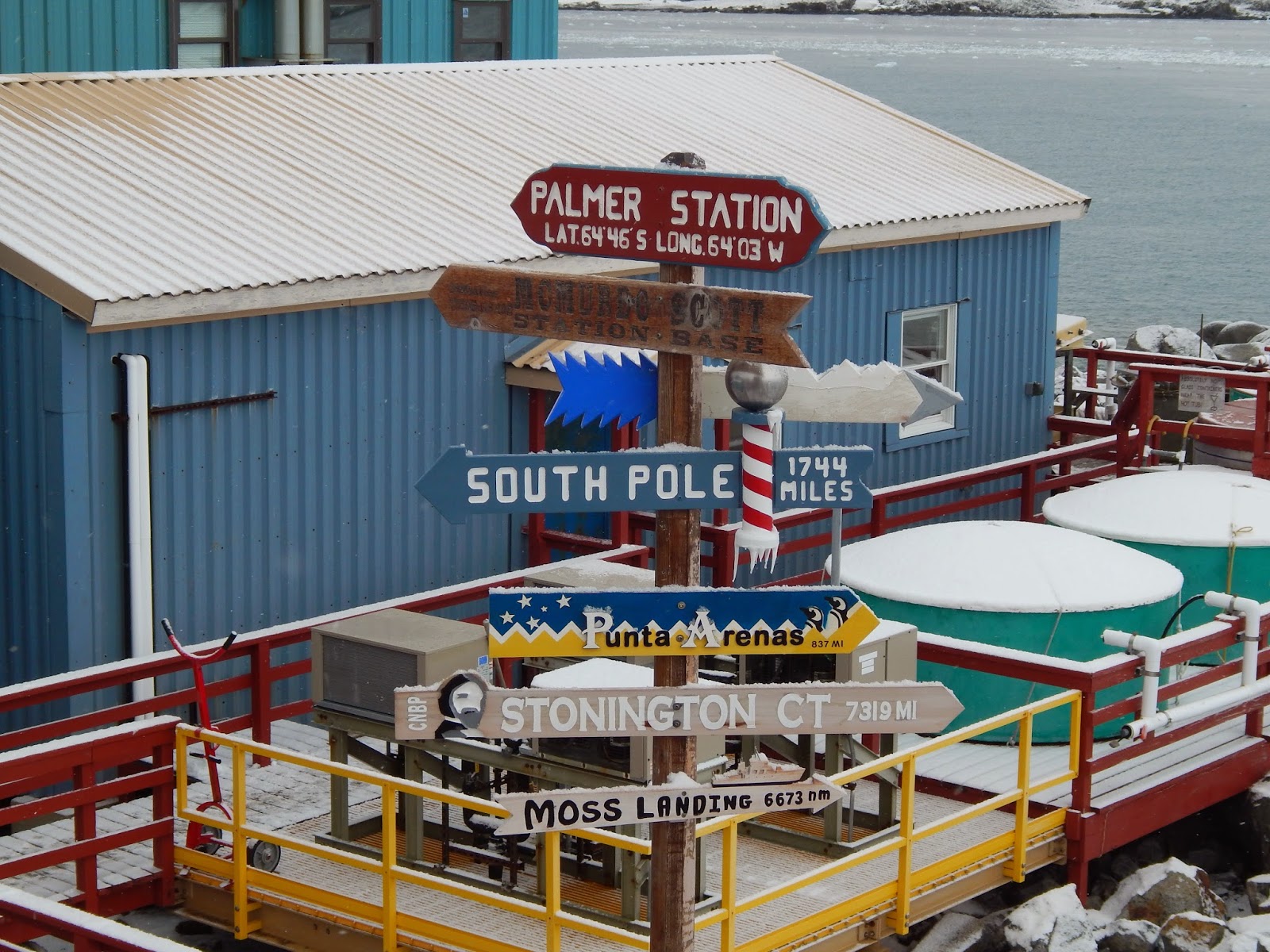 After the presentation, we zipped across the bay in the zodiacs and met our tour guide, the electrician on base. He proceeded to tell us a little about life at the station. We toured around, Erin had the opportunity to pee on her sixth continent, (on other excursions this was forbidden), and we got our passports stamped. After a visit to the gift shop (I'm sure all science labs have these), we were disappointed to learn that the visa statement would not say Antarctica. 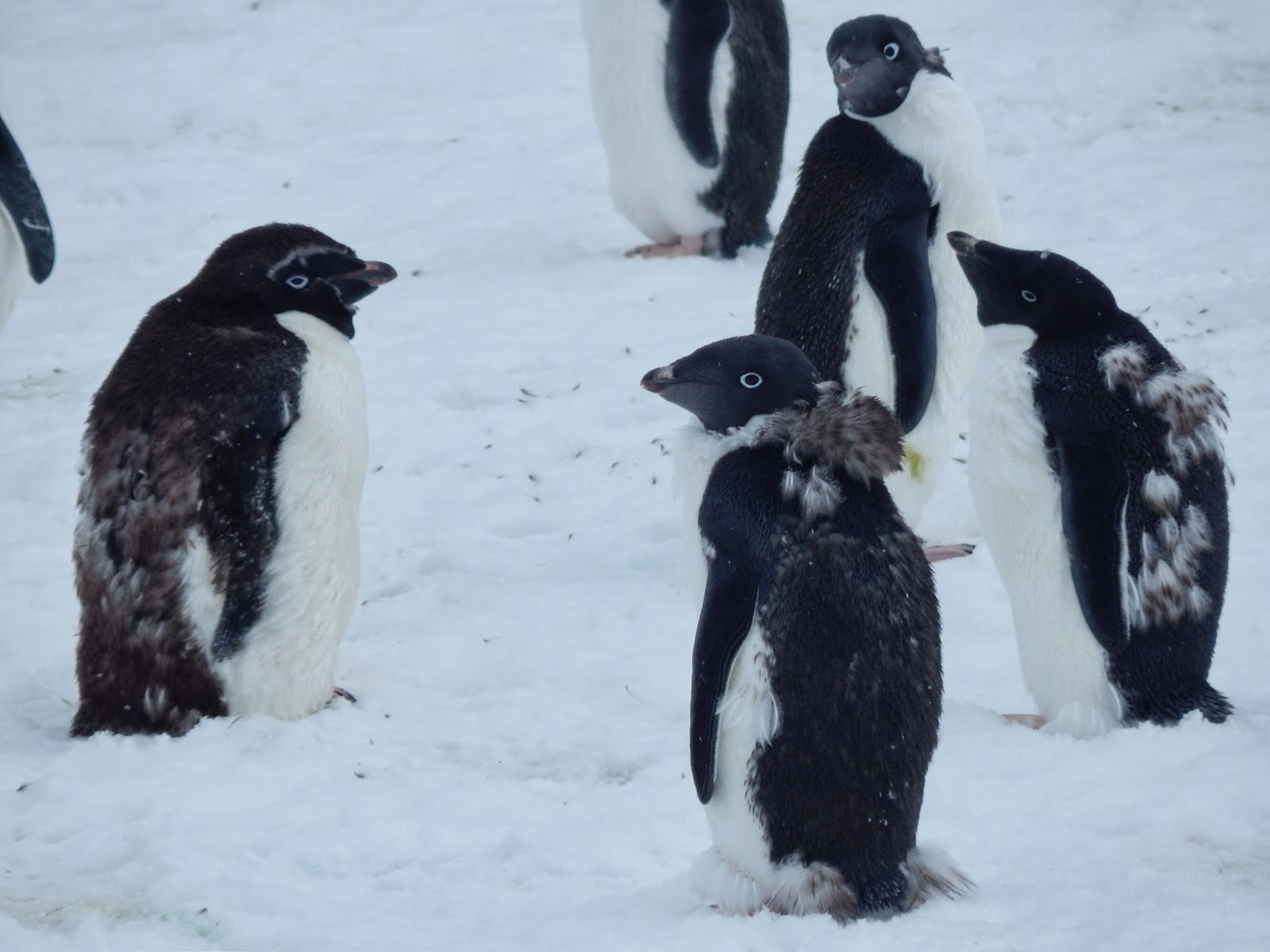 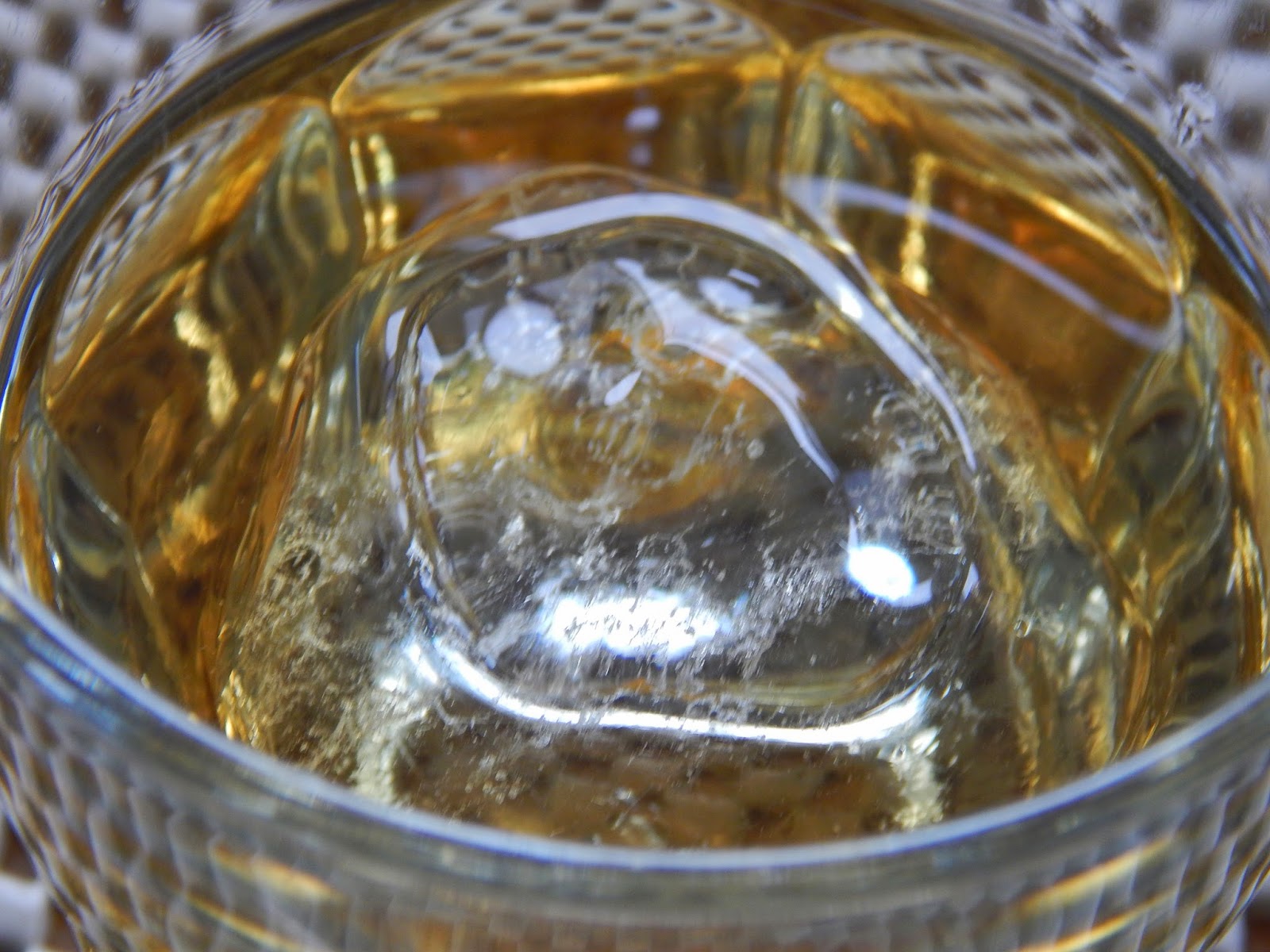 Following the station, we went to an island just across the bay. On shore we were treated to a long cold wait as it was decided for some reason that we would wait for everyone before being briefed. On the upside, Craig found a perfect large golf ball sized chunk of glacial ice on shore. Once we had received our briefing, we found it odd that the large female Elephant Seal laying next to us was never mentioned. 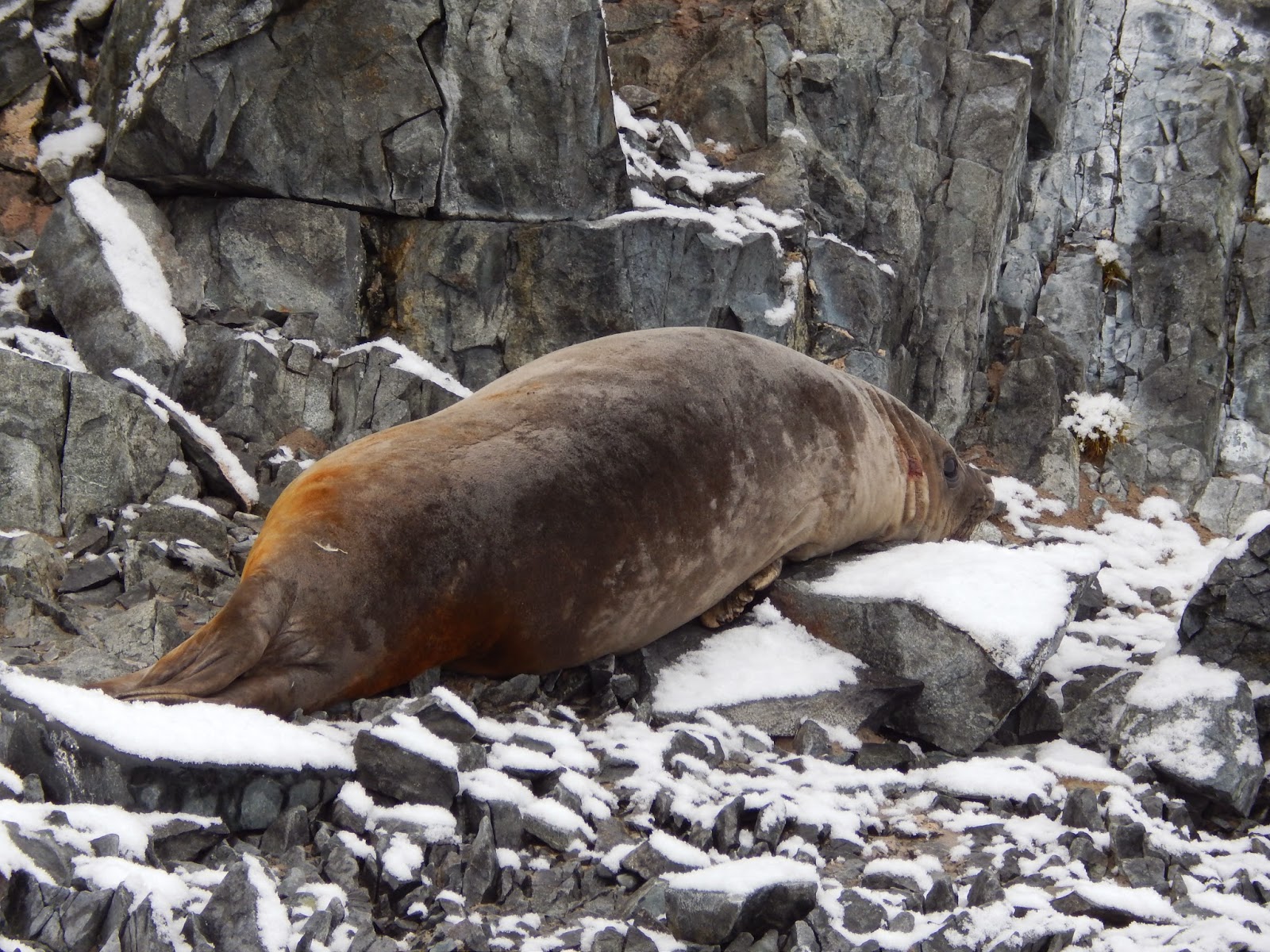 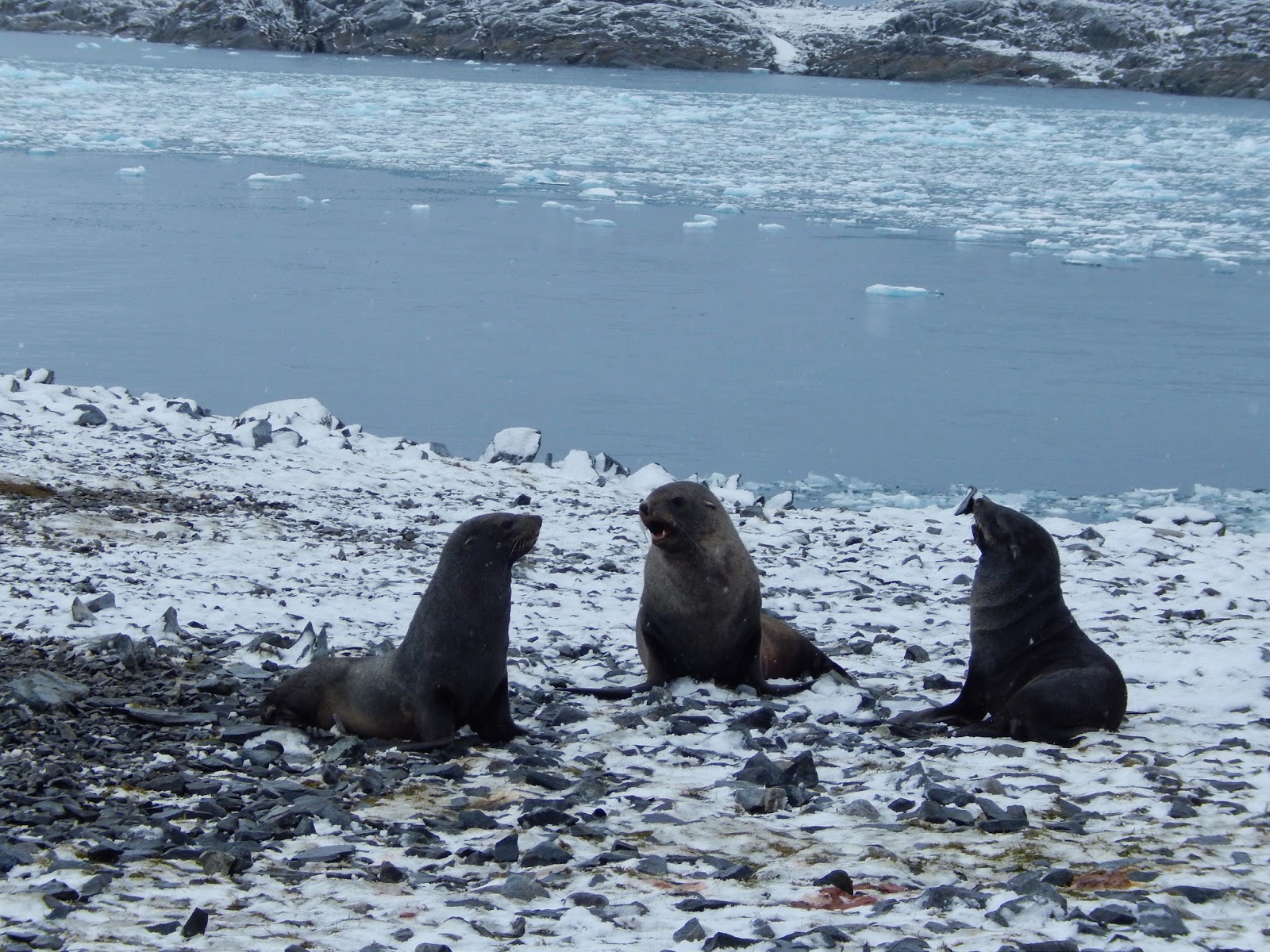 It was a short walk to the other side of the island, but eventful all the same. We sort of dismissed the warnings to be careful of the fur seals; I mean, we live in bear country...but their aggressive hissing, barking, and fighting with each other had Erin rattled enough that she kept pace with our expedition guide, leaving Craig behind the take photos and videos. He caught up quickly, though, which meant we were some of the first people to get a look at the small adelie colony. Craig got a few shots before Alejandro realized that we were actually supposed to keep back another 8 meters. 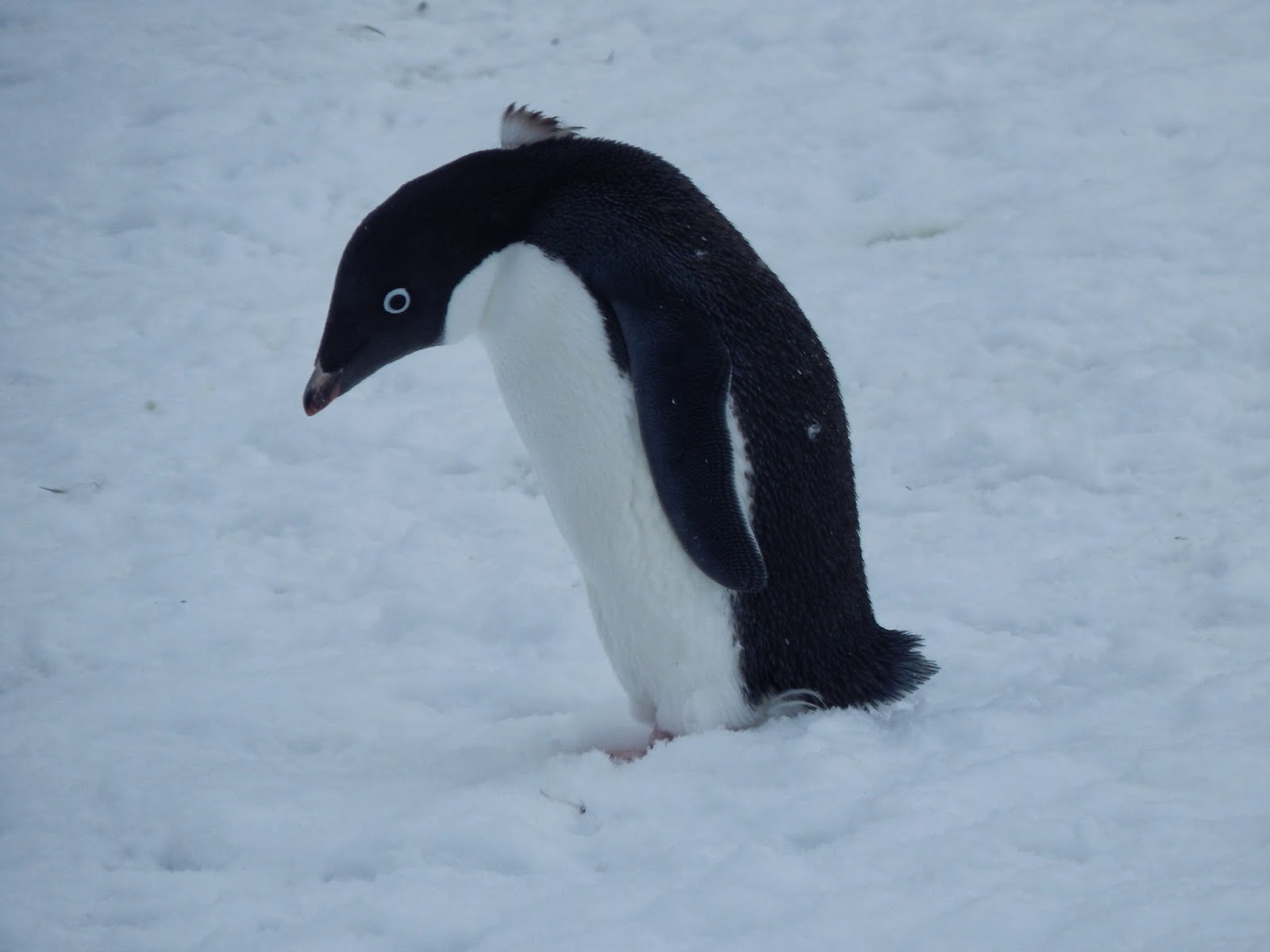 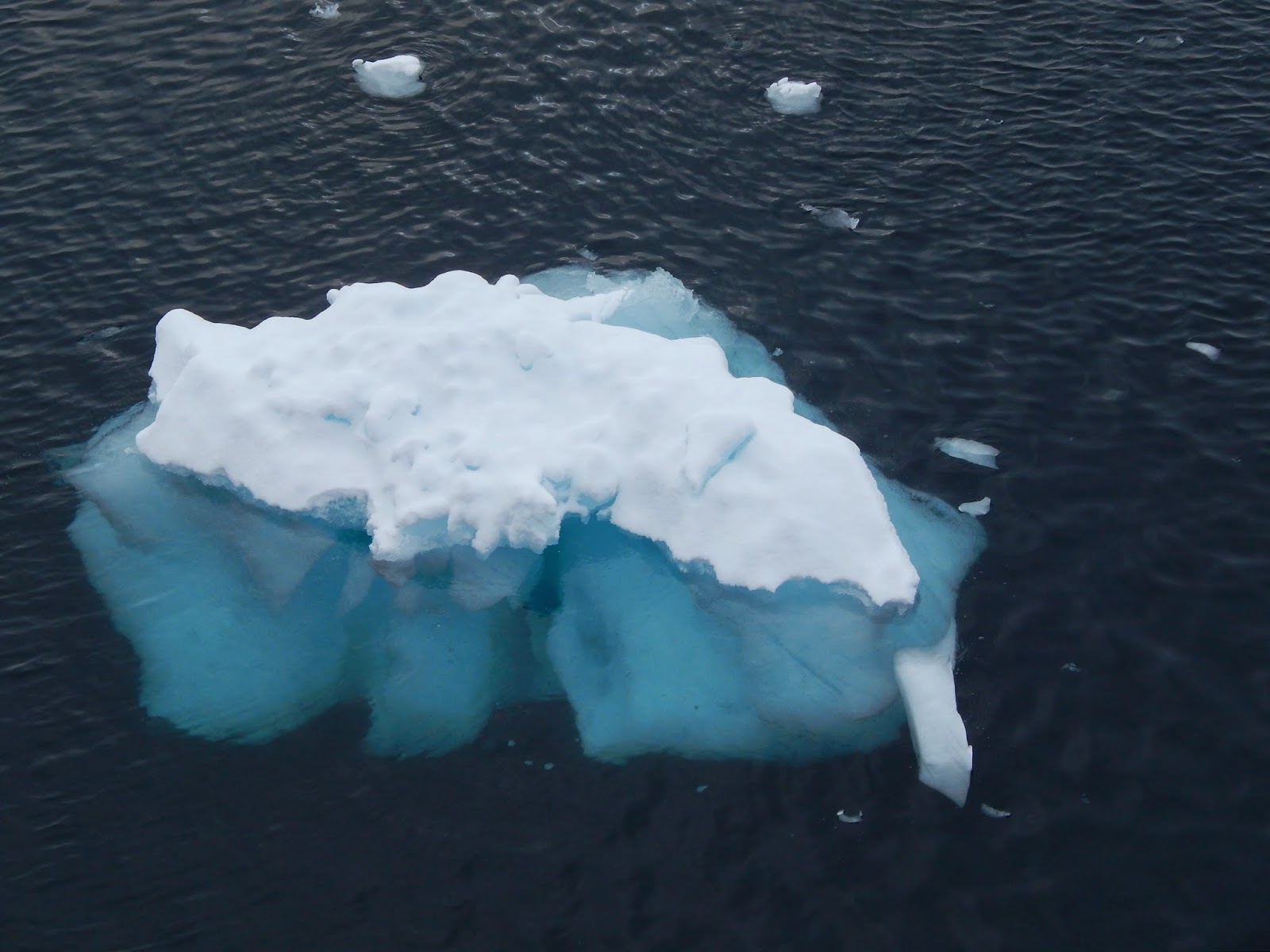 We slipped out early to see if we could convince our zodiac driver to take us on a ride to what looked like some nearby iceberg towers. After 15 minutes of driving, we'd passed the ship and they barely looked closer (though they were right there!) and we had to throw in the towel. We retreated to the ship and had lunch before navigating the Neumayer Canal. (P.S. The picture to the right is not a picture of the iceberg towers...they just didn't look as impressive in our photos). 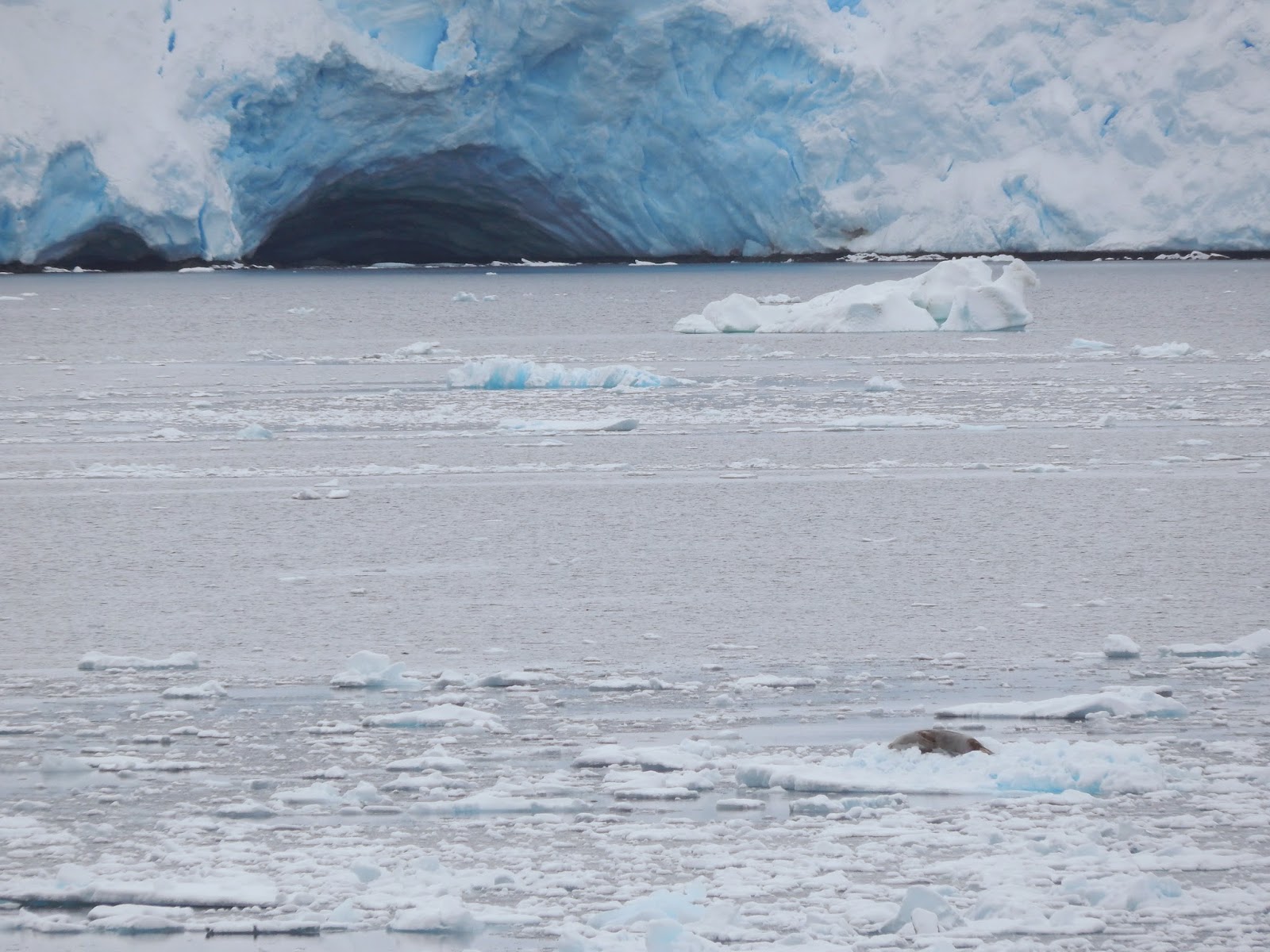 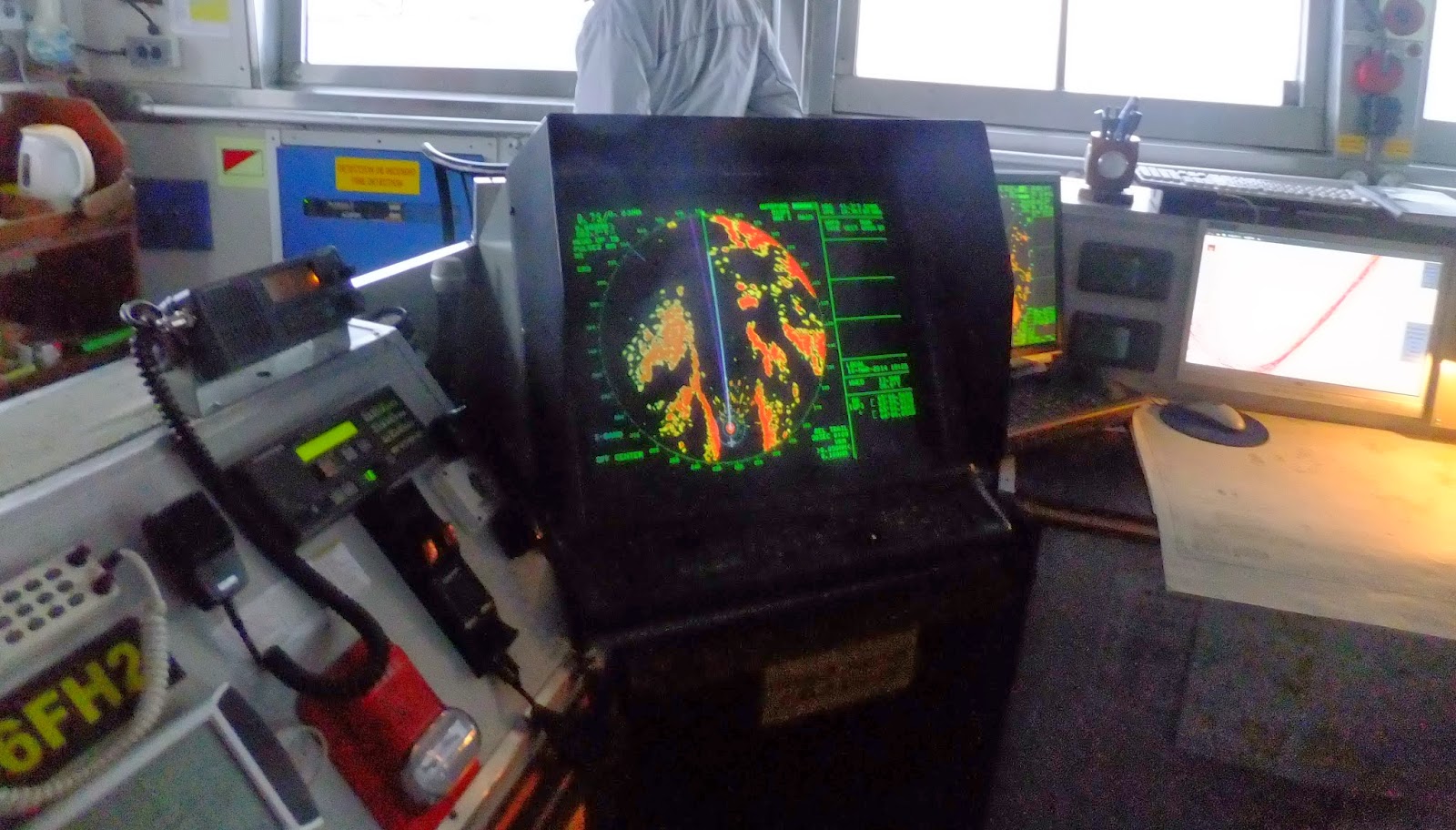 Another narrow canal, the Neumayer probably would have been breathtaking with better visibility, but was still stunning and mysterious as peaks moved in and out of the clouds. Craig took up a position at the bow of the ship regardless and braved the strong winds and cold. It was relatively uneventful, but in Antarctica that still means pretty awesome: seals, sea lions, and penguins swimming directly underneath in the clear waters meant that we could see them as they dove down well below the surface. Craig snuck back inside to warm up before the next excursion. 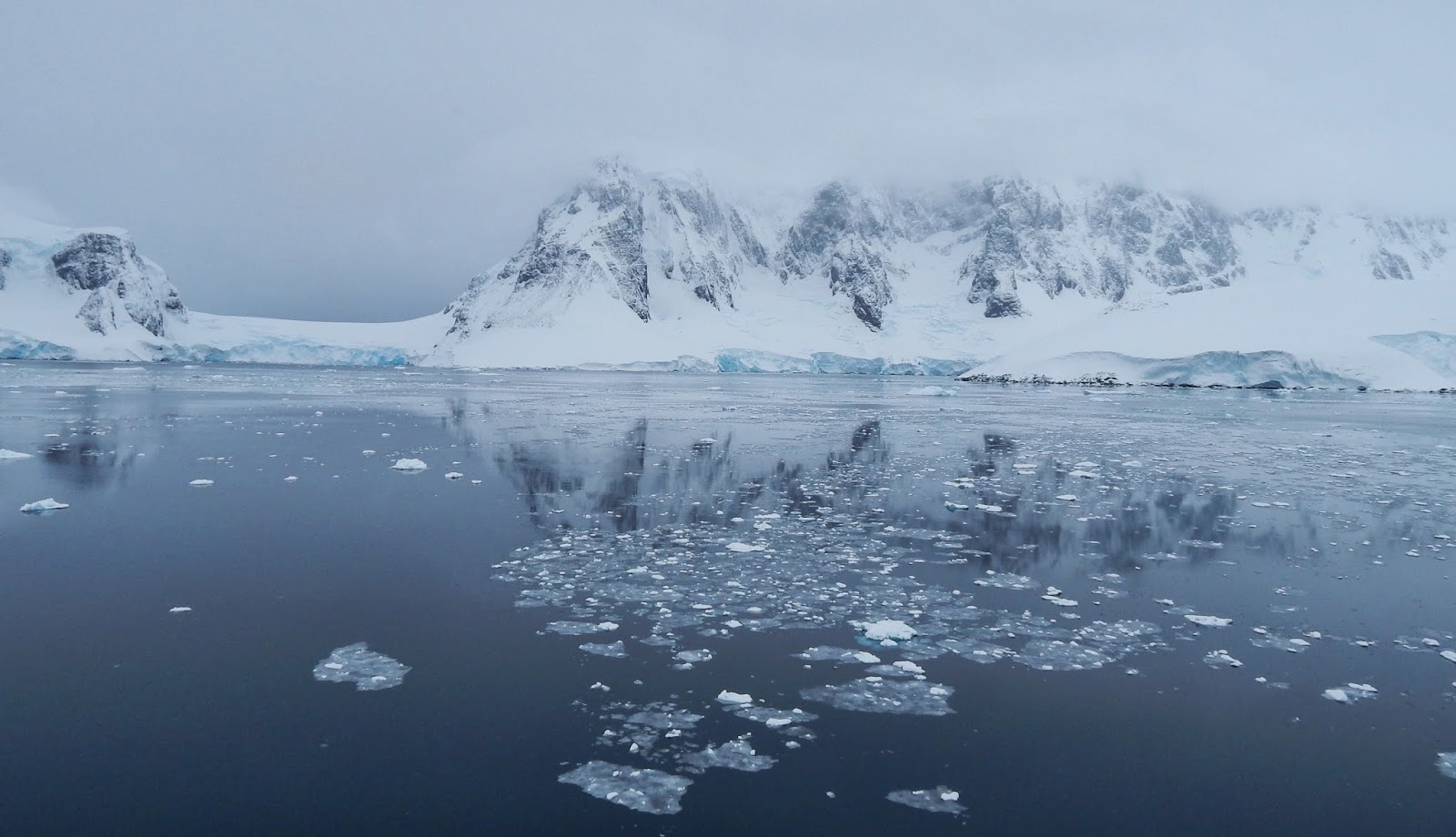 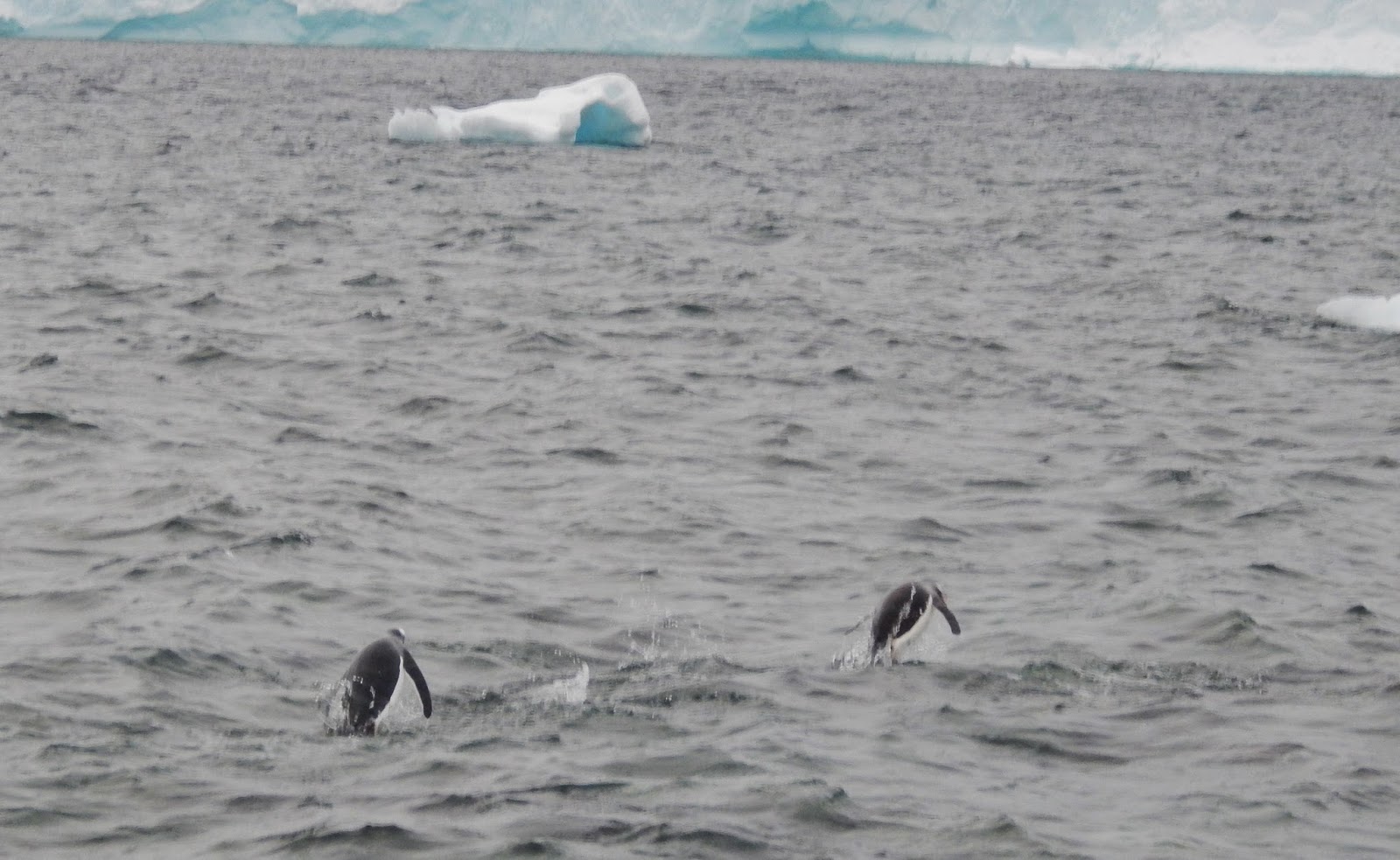 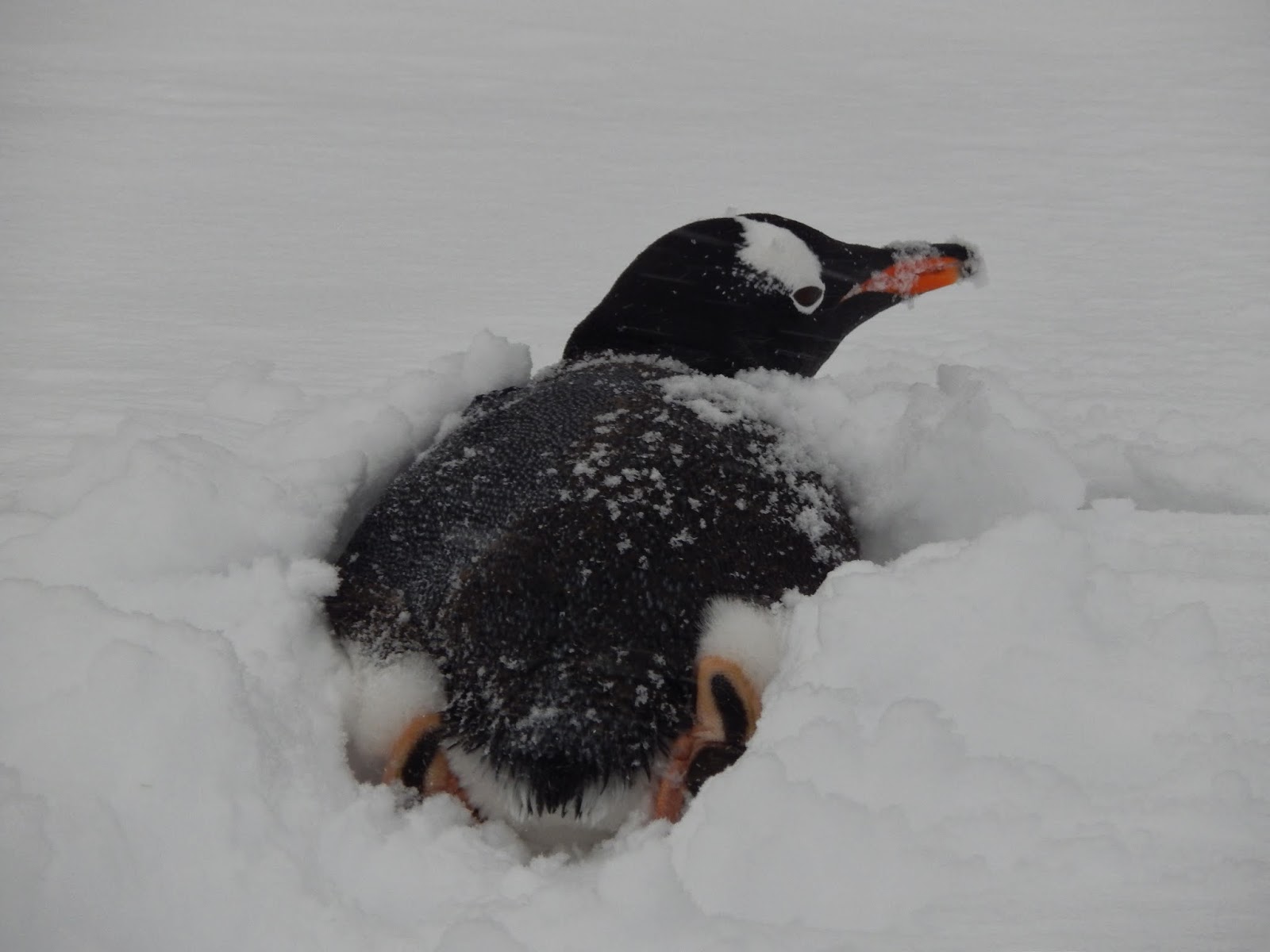 Our next landing was lessened due to weather; heavy snow had moved in and visibility was poor, so our hike up to a view point was cancelled and we would instead just walk along the 'beach'. It still proved to be a profoundly beautiful and engaging landing. To see the penguins playing in the few inches of powder snow was a delight as they jumped, slid, stumbled, and fell. Our already magical afternoon got better when we spotted a lone chinstrap penguin. He was full of energy as he hopped around in the snow, chased gentoos on his belly and came up (reasonably) close to get a good look at us. Without their well worn paths, moving around was slowed as the penguins chose to use our trail to more easily make their way through the snow. 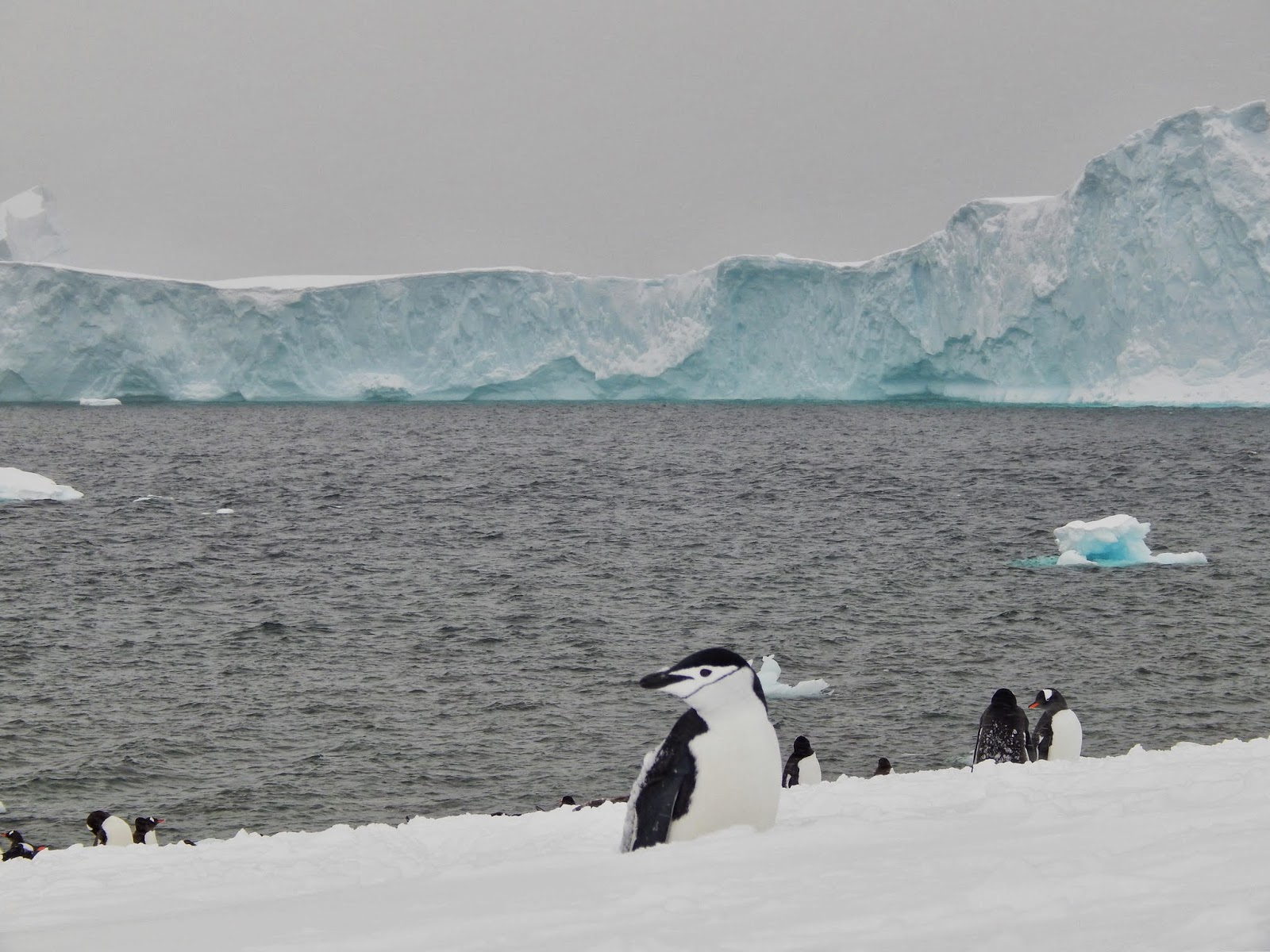 On our walk back to the zodiac we saw some Weddle seals swimming and thought we might see a hunt before we learned that they only eat fish. 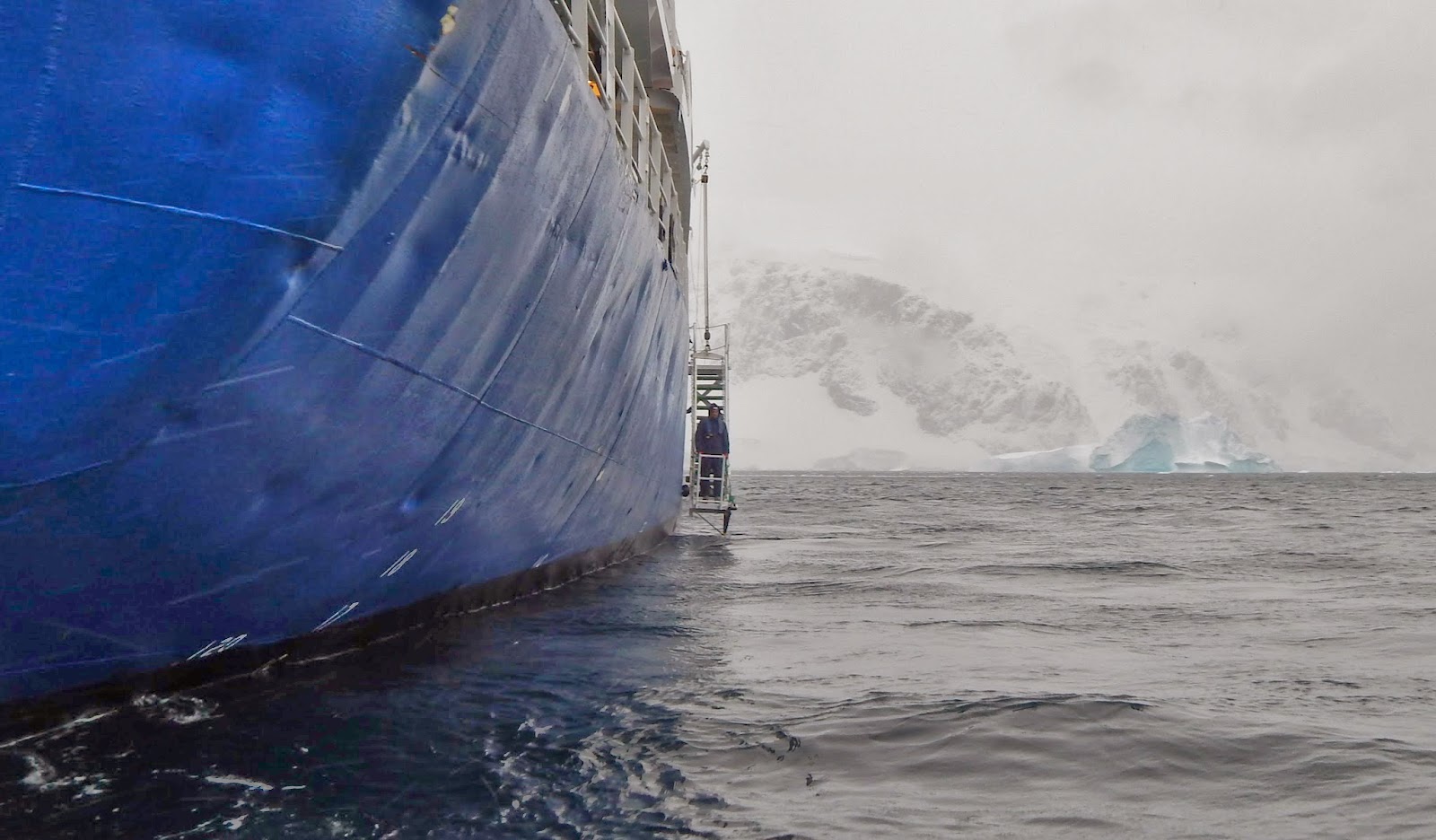