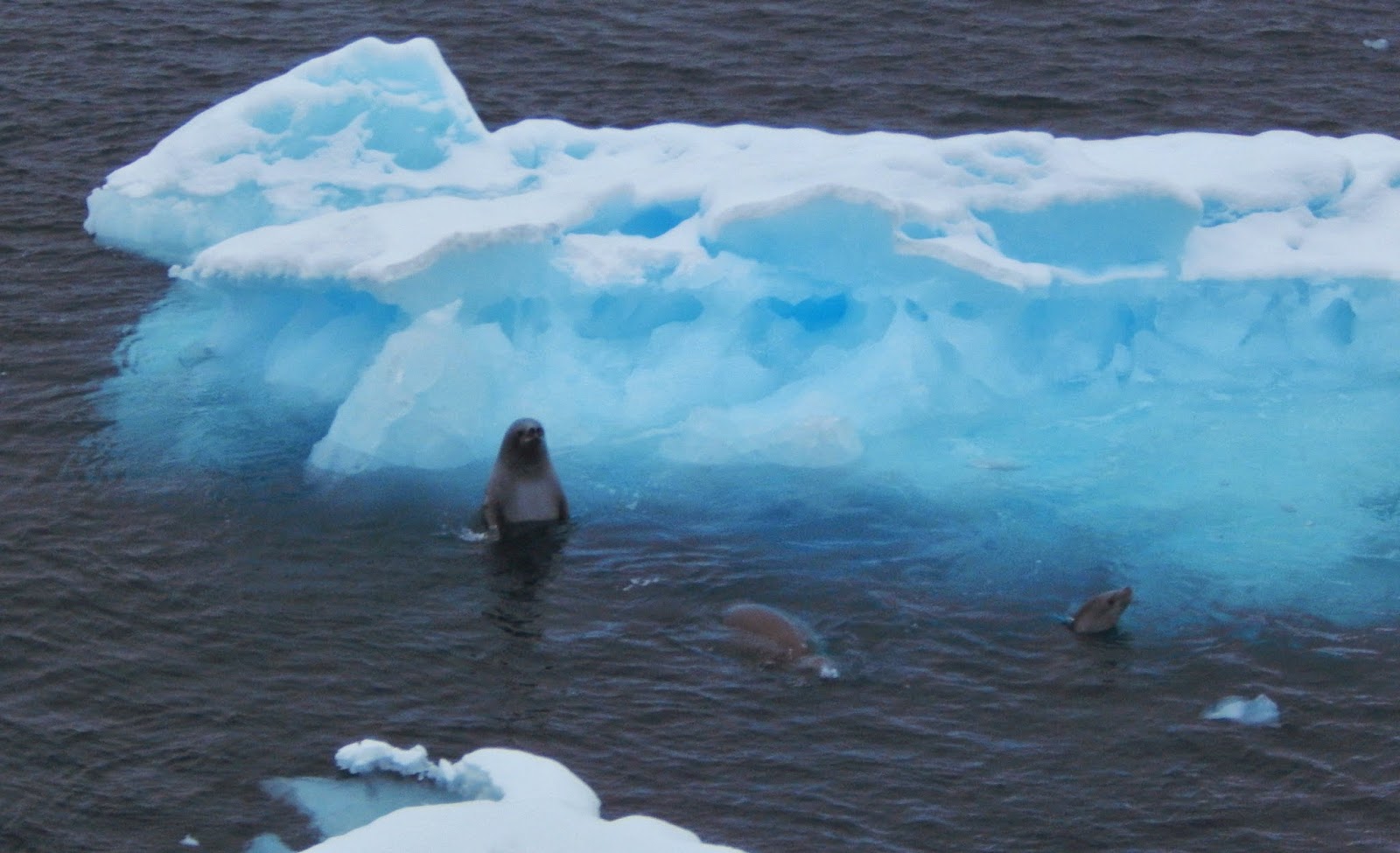 We woke up early so that we could watch the ship navigate through a particularly beautiful, narrow channel. Unfortunately, the visibility was poor. We were happy we had gotten up though as we were surprised by a pod of minke whales swimming alongside the boat, a large flock(?) of penguins jumping around the whales, then as the whales passed the boat a family of crabeater seals swam around an iceberg. Looking further to the port side of the ship we saw more minkes breaching. This in our minds more then made up for the lack of scenery. 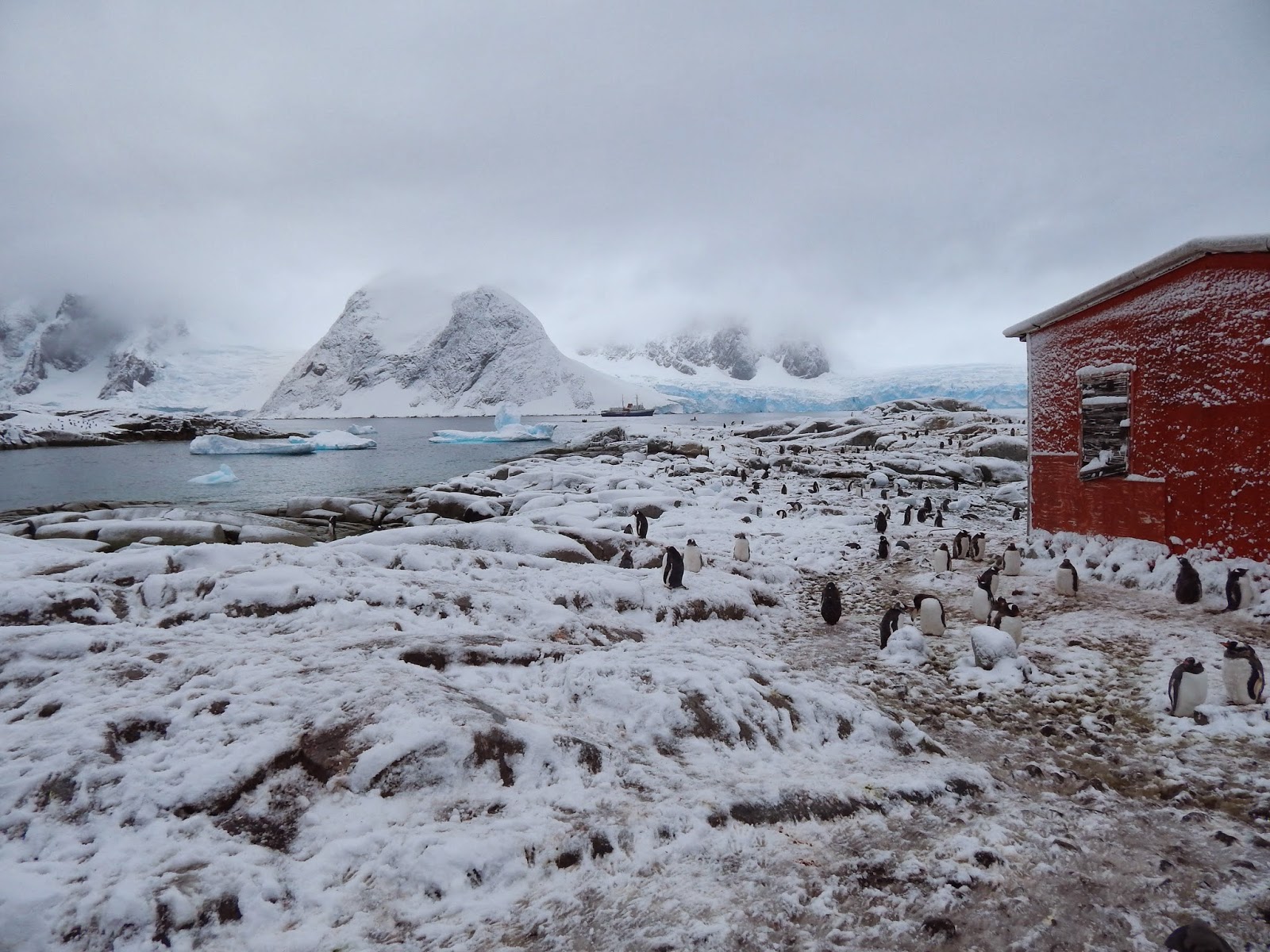 Returning from breakfast to get as bundled as possible, we noticed how our toasty room was starting to smell a lot like penguin. We donned all of our layers all the same, and hoped our room would air out in our absence.

We boarded the zodiacs and headed towards Petermann Island in an attempt to find a few Adelie penguins that had stayed behind when the rest of the colony left. A few of us, Erin included, were treated to a quick view of a battle between a leopard seal and a penguin in the small bay. We can be sure that it didn't end well for the gentoo. 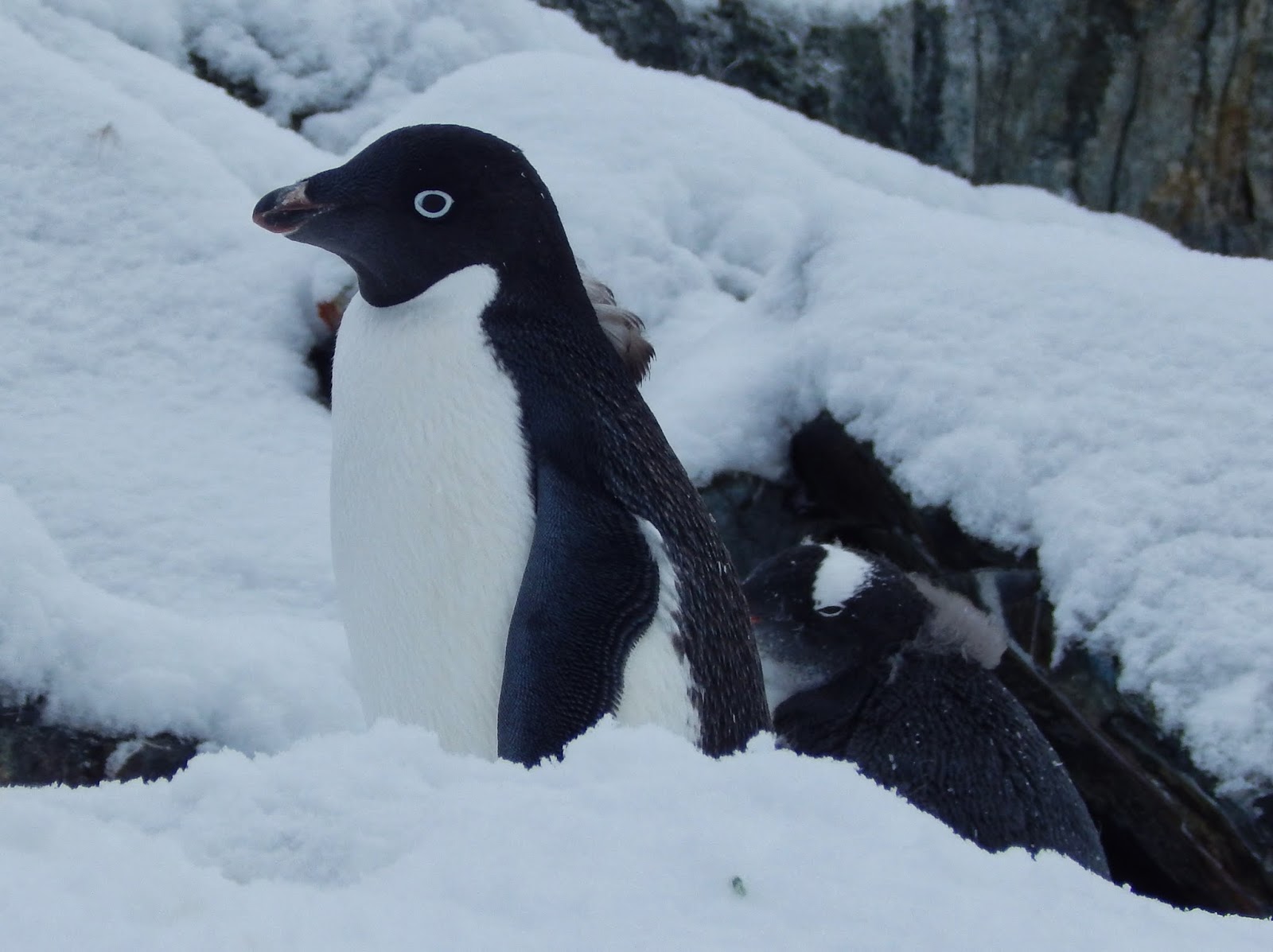 We walked up a hill and were thankful that there were still a few adelies in amongst some uncharacteristically quiet gentoos. We quickly realized how skittish they are, and got frustrated with our noisy companions.

We tried walking down the hill to join the other group at the cormorant colony, but had an equally noisy experience. Feeling cranky, we walked back up to the adelies, where Kata was quietly sitting alone, with a gentoo beside her, and the others all but sleeping. It was perfect.

Feeling better, we joined Sebastian on a hike to a viewpoint of the bay. We looked out at the southernmost point we would see, most likely in our entire lifetime, and felt quite happy with our decision to come. We'll have sacrifices once we're back home, for sure, but (we hope) they'll all be worth it! 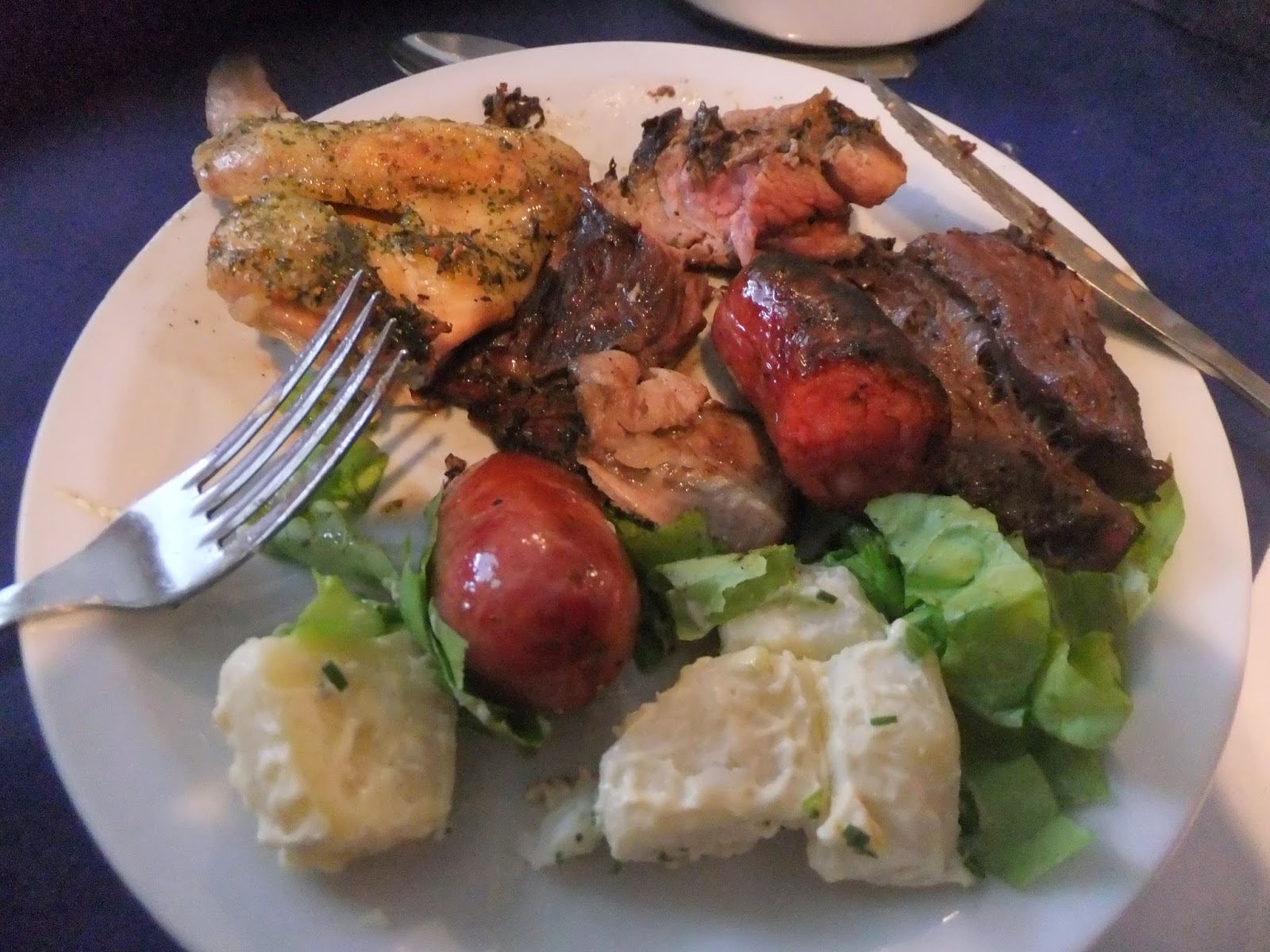 As the zodiacs circled the ship, we were treated to the smoky smells of our lunch wafting seaward. Chorizo, chicken, lamb, and beef a la parilla more than made up for the disgusting baked eel we'd been served the night before (that everyone on the ship was still talking about).

While the "Seals" group took their zodiac tour, we enjoyed a much-needed meat and wine-induced nap to recover from Keith and Angie's wedding the other night. 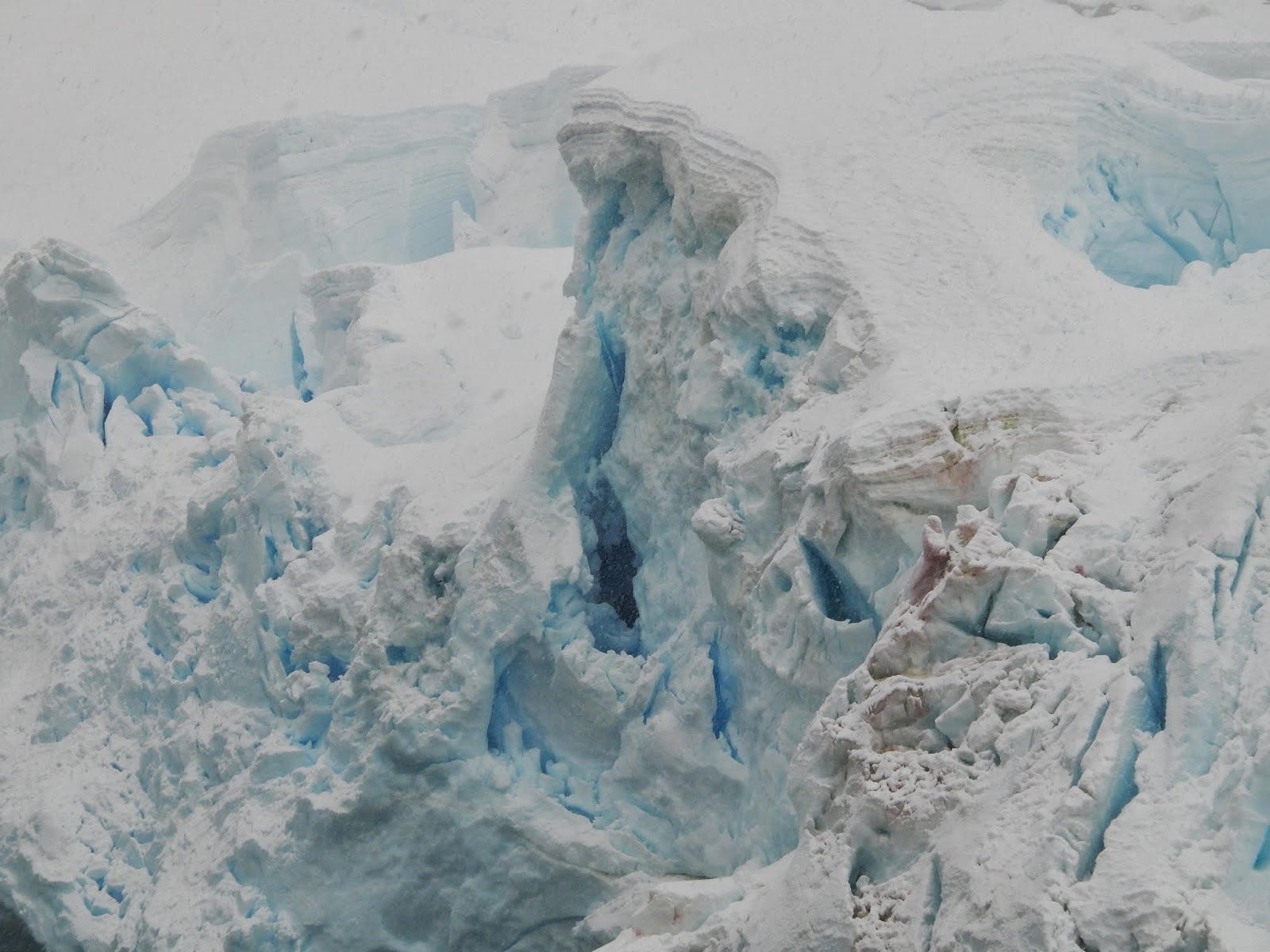 Clumsily making our way up the two flights of stairs and through the ship in all of our many layers, we crossed paths with the Seals group coming in from their zodiac tour. Their rosy cheeks and frosted eyelashes shone ominously, and a glance at the knitting ladies curled up next to the heater had us reconsidering our outing. We were already suited up, though, so we thought we may as well give it a try. We gave the disinfectant station a wide berth, not needing to dunk our rubber-booted feet in freezing water before we'd even begun since we would not be setting foot on land. One glance at the zodiac drivers had us nearly turning around. Their usual stoic expressions easily visible from their lack of clothing had vanished behind layers of toques, buffs, and googles. 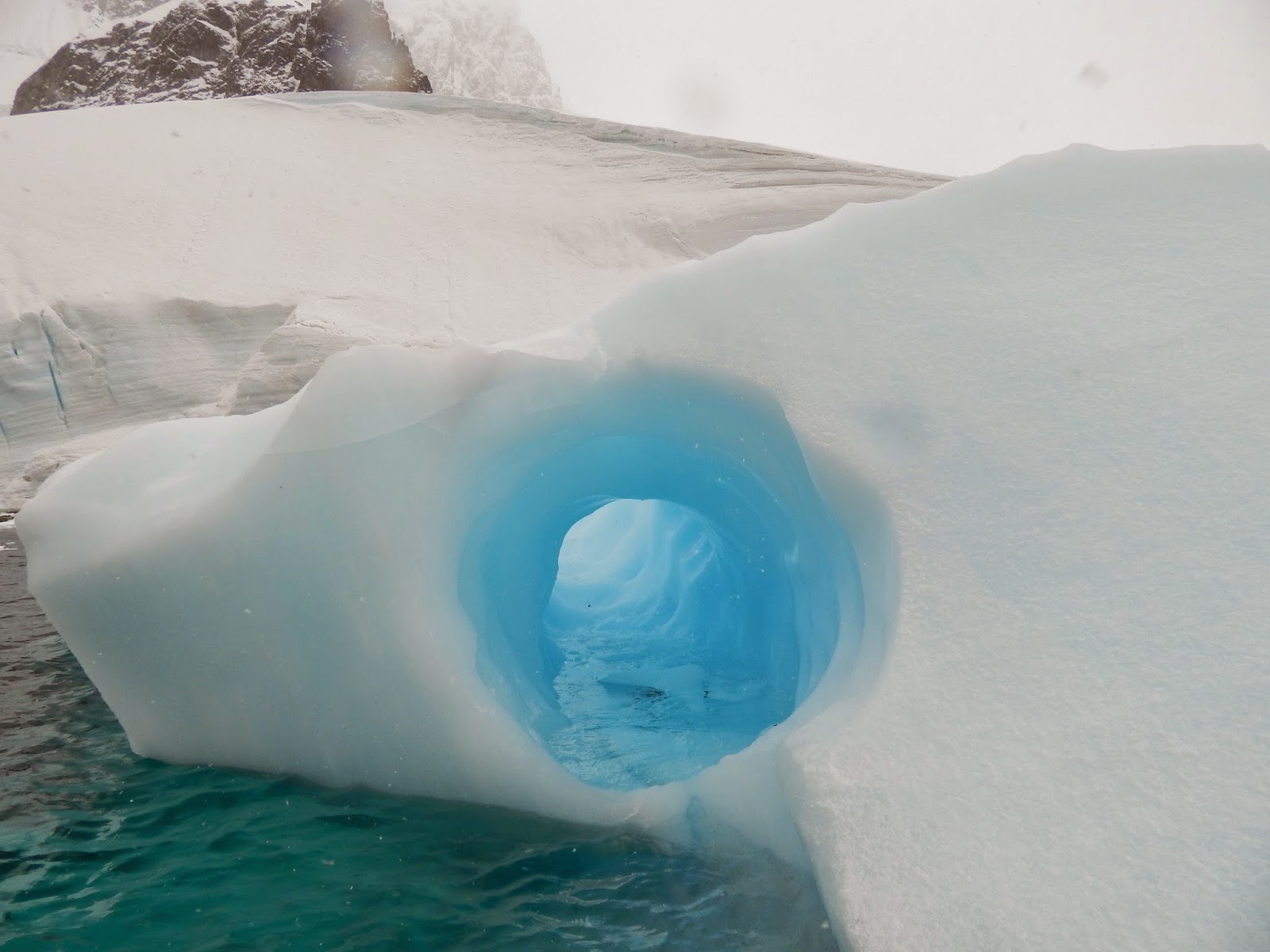 We held on tightly to the gangplank as it rocked in the wind and shuddered under our weight. The last to board, our boat only had five. Clearly, others had decided against the trip. At first, the ship buffered us from the wailing wind, but as the zodiac peered out from behind its bow, our faces turned raw almost instantly. We huddled over, hanging on to the ropes with all of our strength. We had seen some humpback whales from the ship while waiting for the zodiac and now aboard the small boat our pilot, Pablo, called to us over the roar, "We just need to drive through the channel and then we'll be sheltered by the glacier, but first the whales are not breaching so we can go close to them." 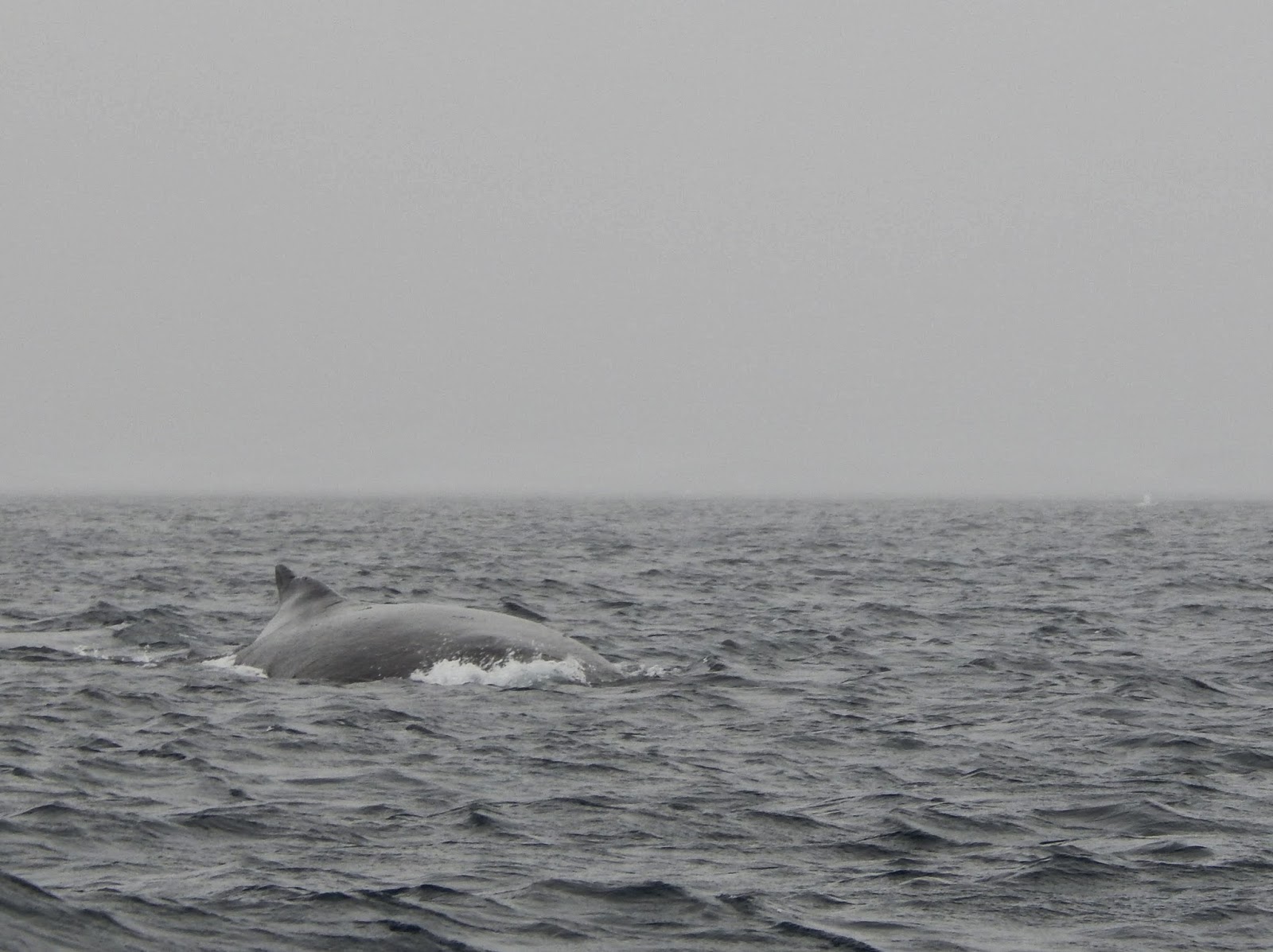 Thus, rather than set a course for cover we drove straight into the waves pitching up and slamming down hard. We thought we may have lost the whales but then sure enough 60 m out another blow sprayed into the air. Positioning ourselves directly in its path provided an exciting view as it surfaced a few more times growing ever nearer. The excitement turned to fear as thoughts of how easily the 20 meter long animal could accidentally flip us into the freezing, dark waters beneath us. As it approached it dove below and disappointingly/thankfully we did not get an incredibly up close experience. 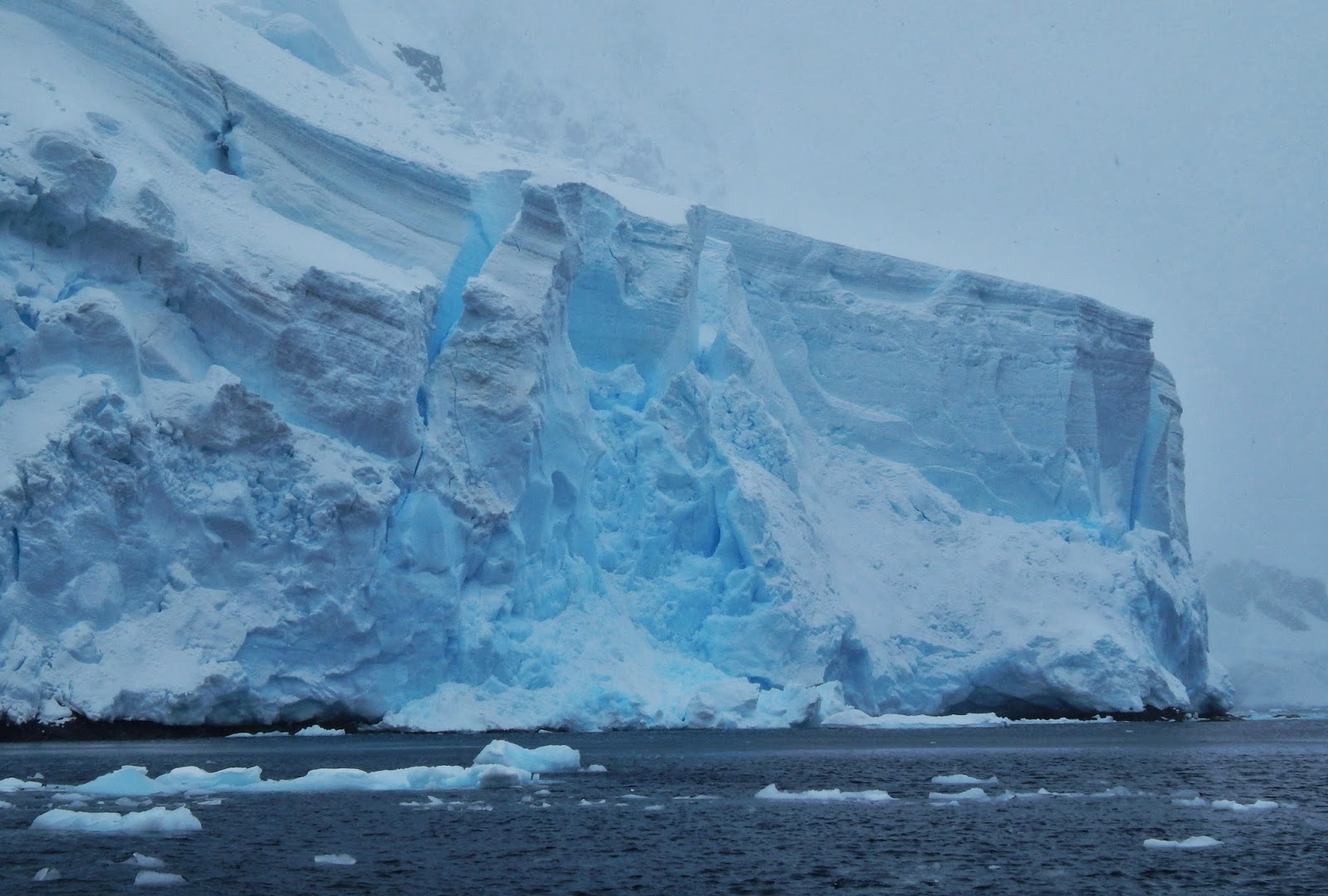 A few minutes later, all was calm, and we were able to peel back our layers enough to see. We skirted around icebergs and had a full view of the beautiful glacier. It was exhilarating to be so close to it in the water. He reassured us that we'd barely rock in the waves it would create if it calved.

We caught sight of a minke whale moments after another zodiac, so they had the joy of running along beside it. Minkes love to jump alongside boats, so they had a real treat. We got very close to some more seals, a highlight was seeing a leaopard seal yawn, displaying all of her glistening teeth and surprising red palette. 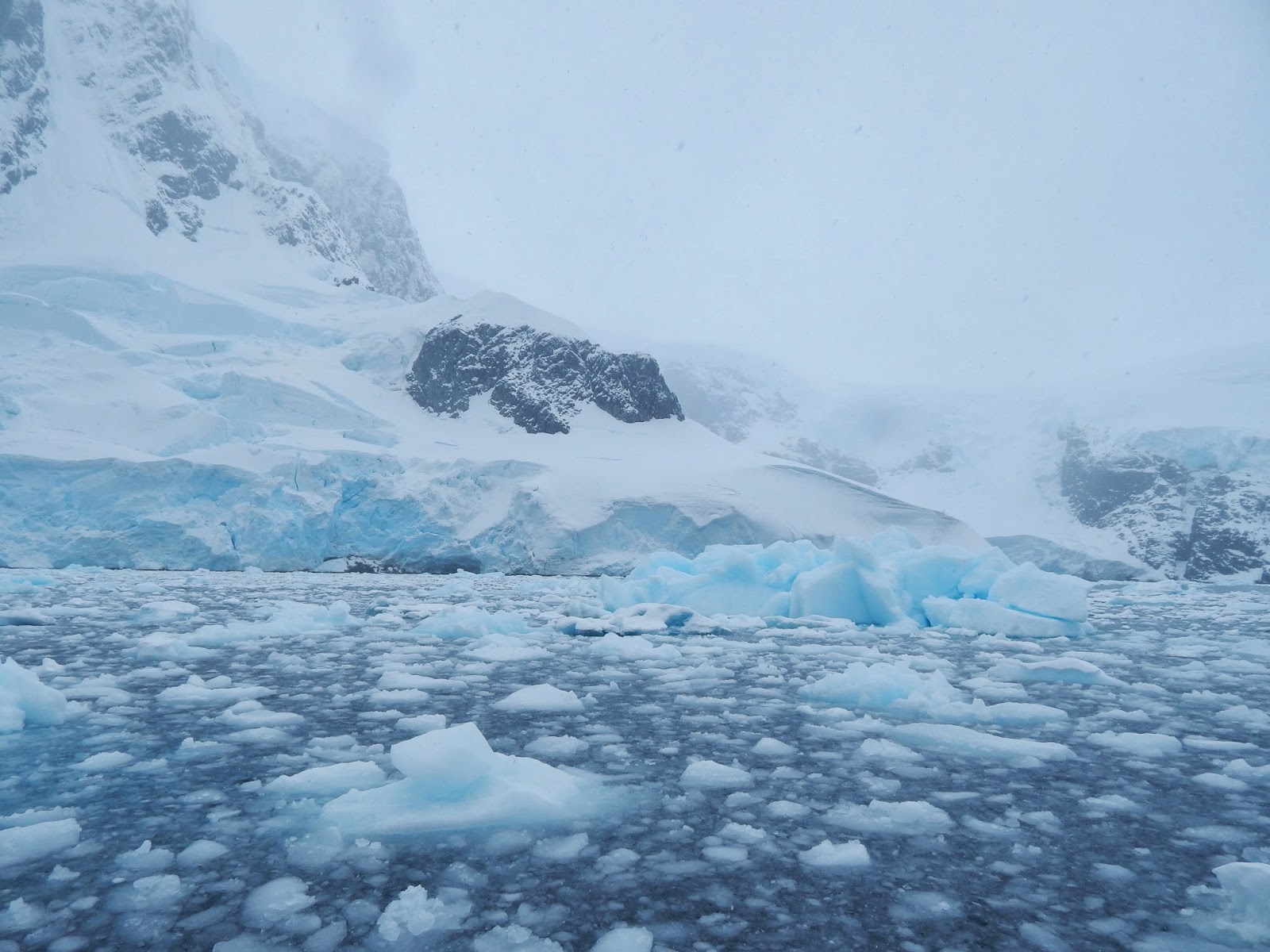 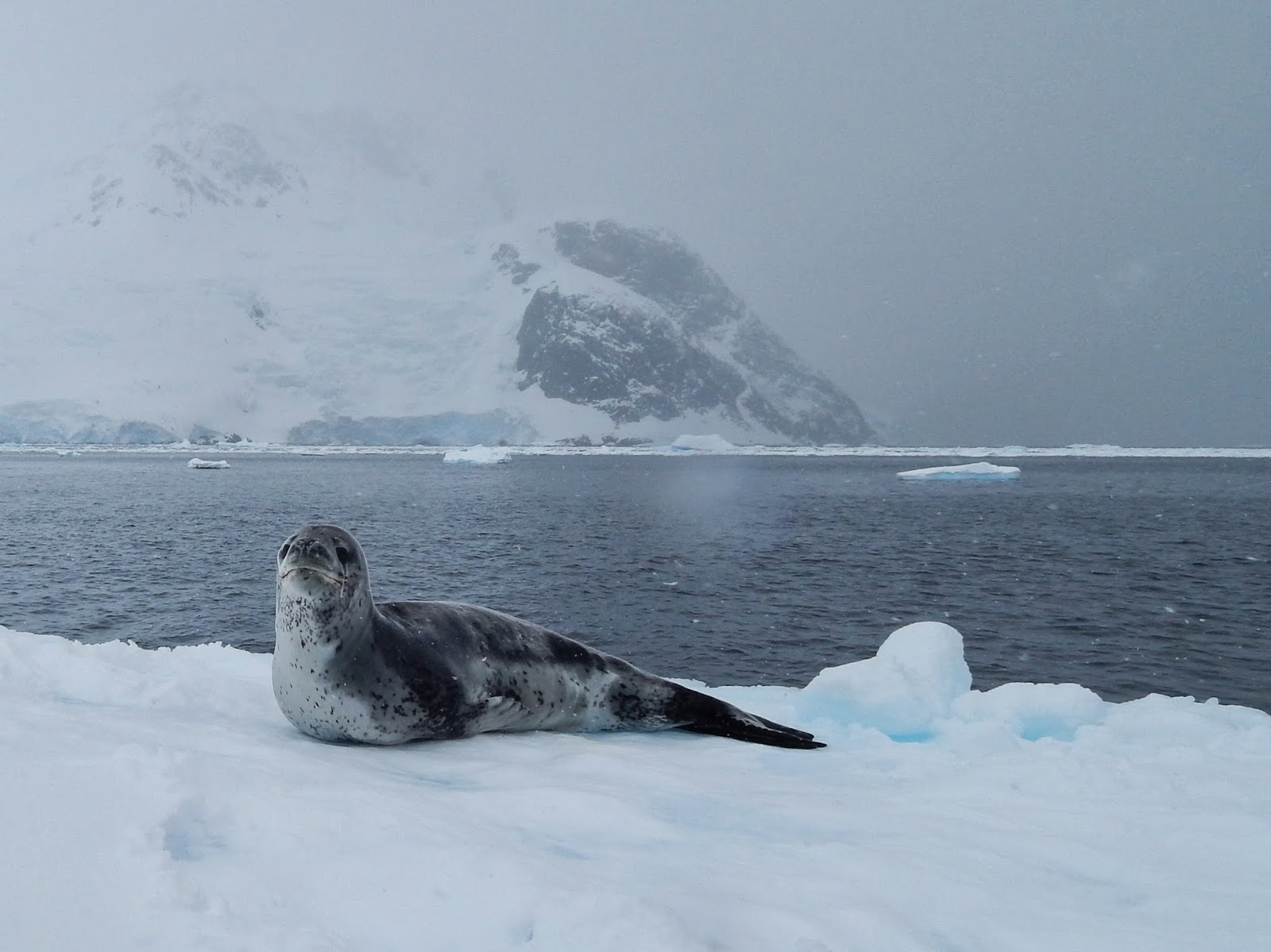 We were in the process of delayering after our cruise when the familiar crackle of the PA system caught our attention. Thinking it was a little early for the "Good Evening, Good Evening Everyone" dinner announcement, we briefly stopped what we were doing to look up. The usual, "Please be careful, as the outside decks are very slippery" comment now had us trained to know what was coming next. We were already throwing our shoes back on as Sebastian announced, "That being said, if you look to the starboard side of the ship, you will see an orca in the water." Well, the word "orca" caused instant chaos. It was one of the few Antarctic animals we hadn't seen yet on our expedition. Doors were thrown open as "Penguins" who'd been changing, and even mid-showering, came hurtling out of their chambers. We ran up the stairs and out onto the deck, but were far too late because of the long distance we had to travel. Only a few people had actually seen them, with Clare being the only passenger on the boat to have a tiny photo of three black fins by an iceberg.

Disappointed, we returned to our room to finish changing. On the bright side, the tasty salmon served for dinner almost made up for missing out on the sighting. 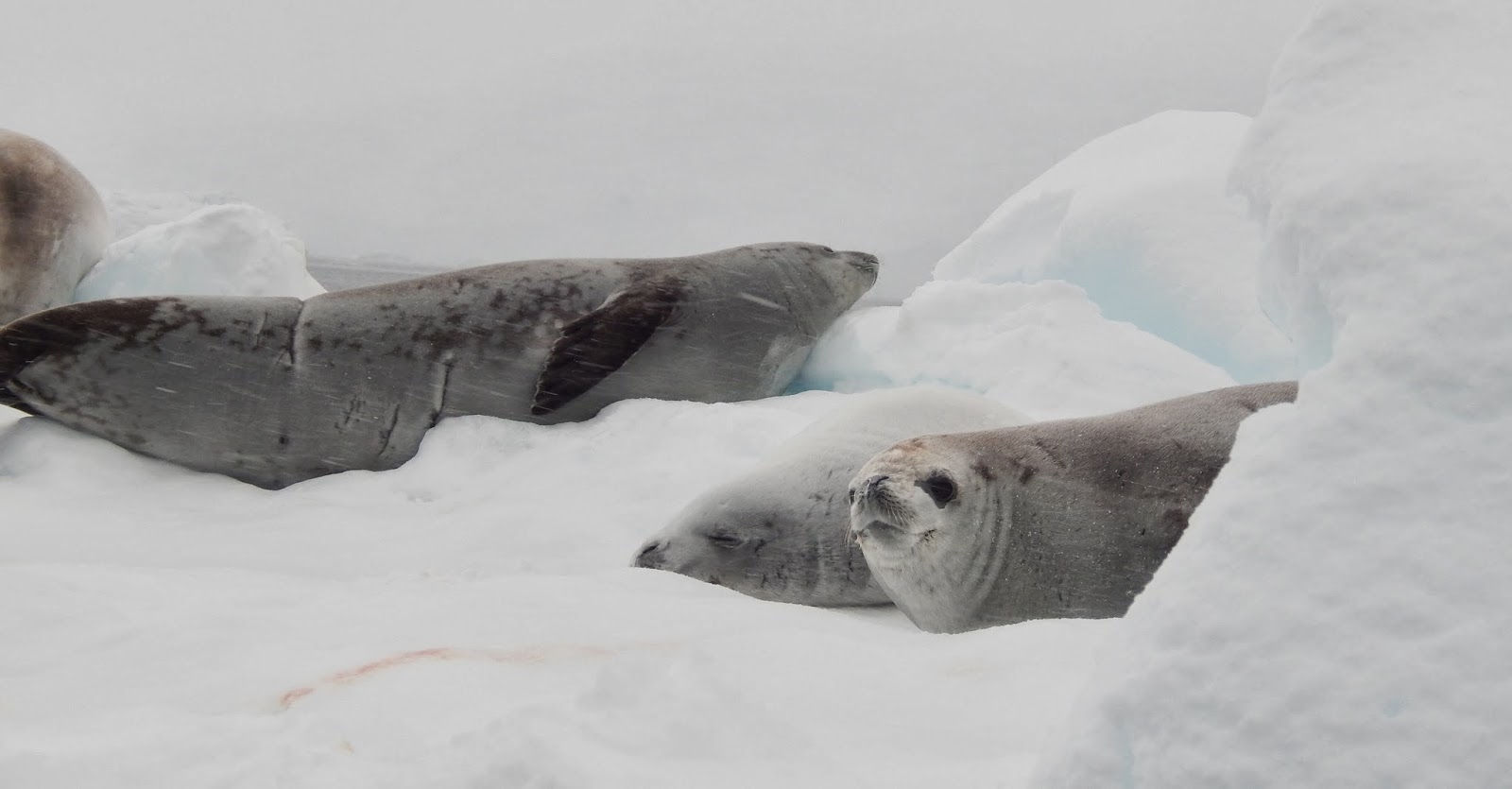