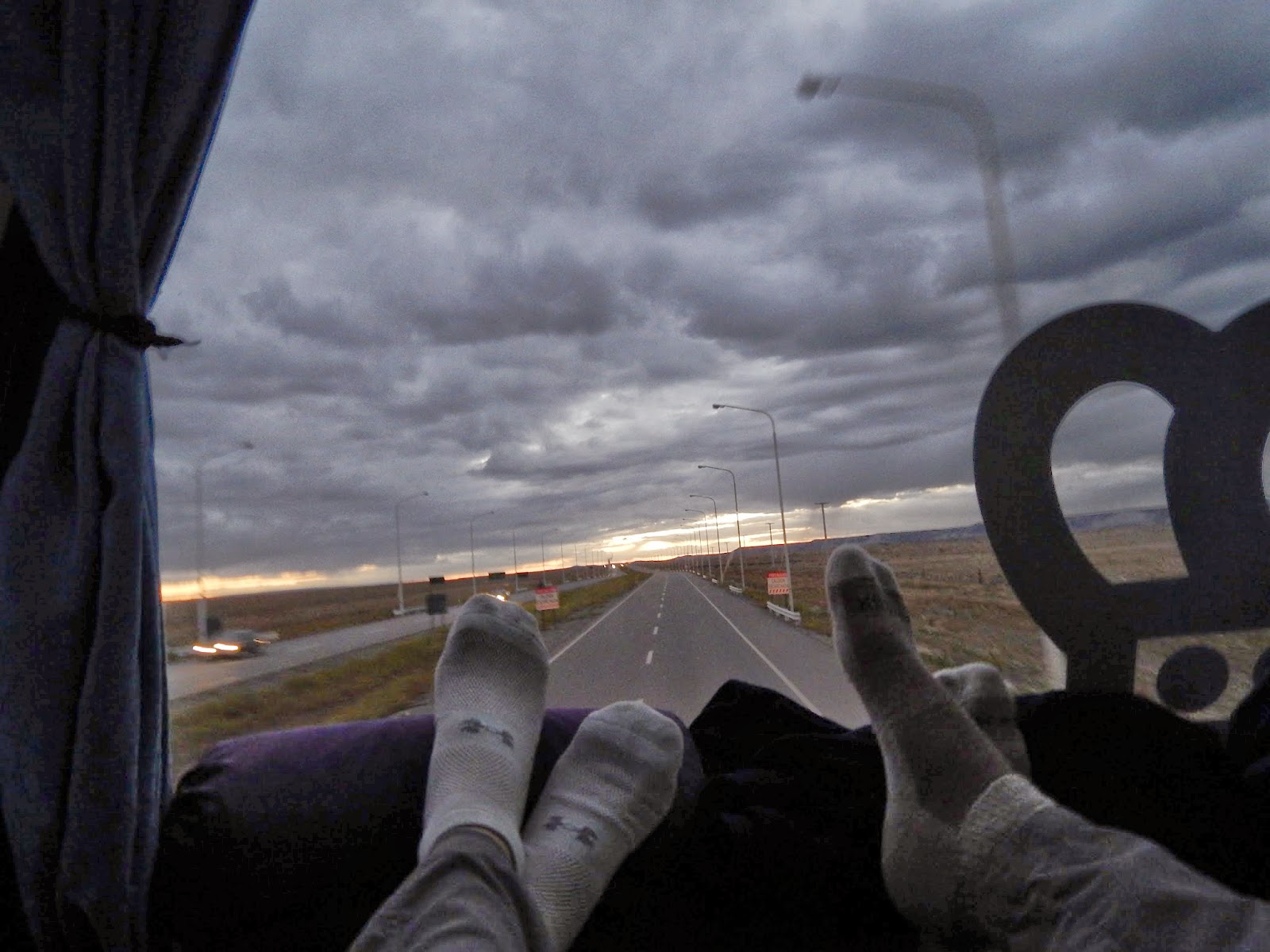 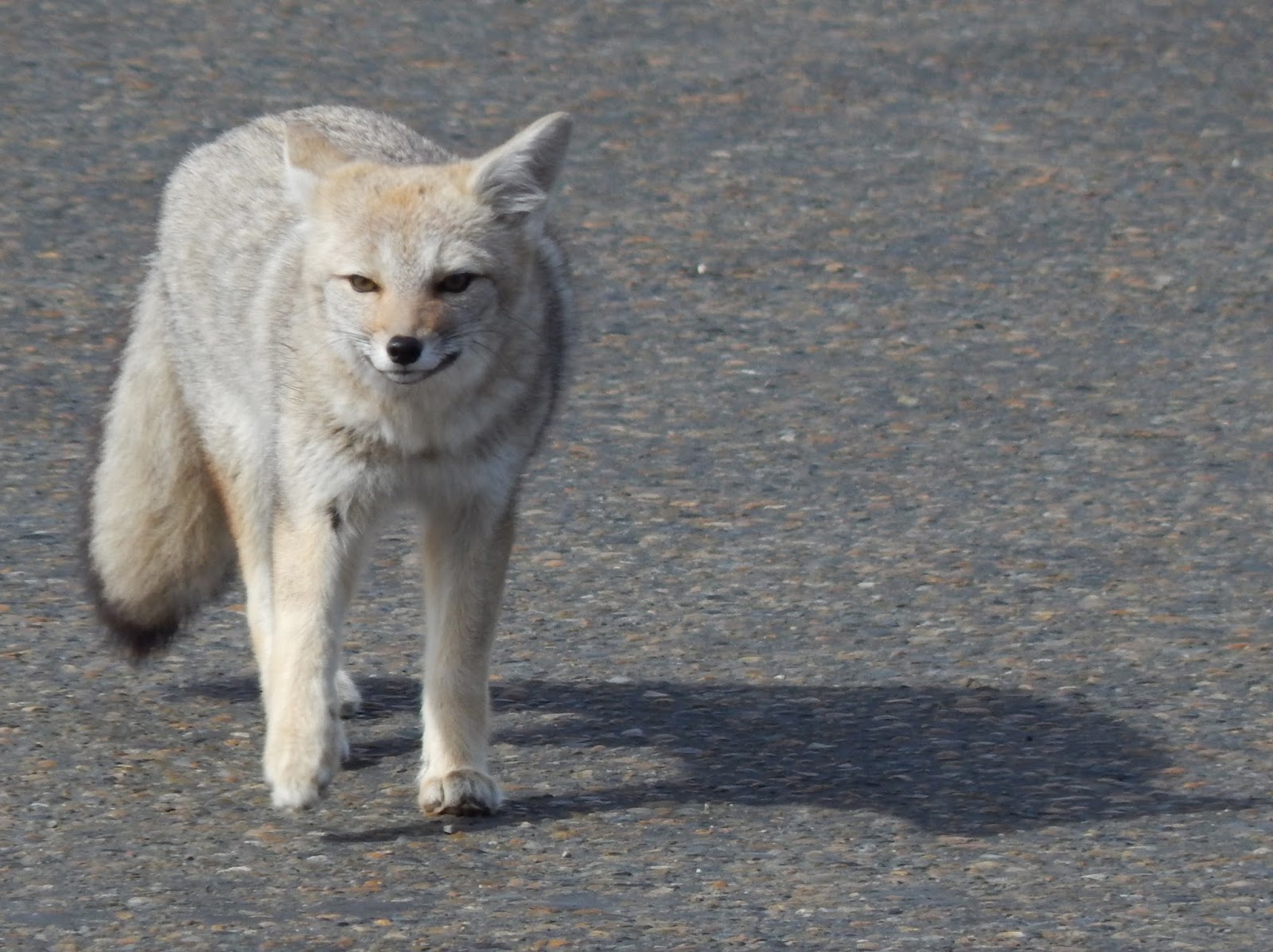 So, you've had the experience of a lifetime, spent eleven days at sea, taken in the beauty and power of Antarctica, and come back on land to... wake up at 4 am for a 31 hour bus ride across the continent. You're coming off ten nights of 'sleep' in a bunk bed in the pit of the ship where a metal bar kept you from being thrown onto the floor (and I emphasize thrown). Illness was passed as rampantly as you'd expect in a confined space such as our vessel, and your first night on land was in a dorm bed of a noisy hostel on a party street. Is the scene set? Good. Now, no one likes a whiner asking, Are we there yet? so we'll distract ourselves with a car game.

We're going on a 31 hour bus trip, we're gonna take our travel pillows...
Phase One of the trip was spent sleeping or attempting to sleep. It was still dark out and we had already done this drive from Ushuaia to the Magellan Strait when we went to Puerto Natales, so we weren't missing anything new.

We're going on a 31 hour bus trip, we're gonna take our passports...
Phase Two of the trip was spent sitting in Rio Grande for an hour while we took turns going into a tiny immigration office where we got our passports stamped to 'leave' the country for a few hours.

We drove on a bit further, still got out at the Argentinian border to put all of our bags through the scanner (who checks your bags when you're leaving the country?), and drove through no man's land to the Chilean side. Them repeating the whole charade again as we passed back into Argentina a few hours later.

We're going on a 31 hour bus trip, we're gonna take our cameras...
We were now travelling a new road for us, so we started to pay attention. Not that it mattered much; the barren landscape zipping by outside was dotted only occasionally by rhea or guanacos. But we did enjoy a look at these foxes during one of our crossings! 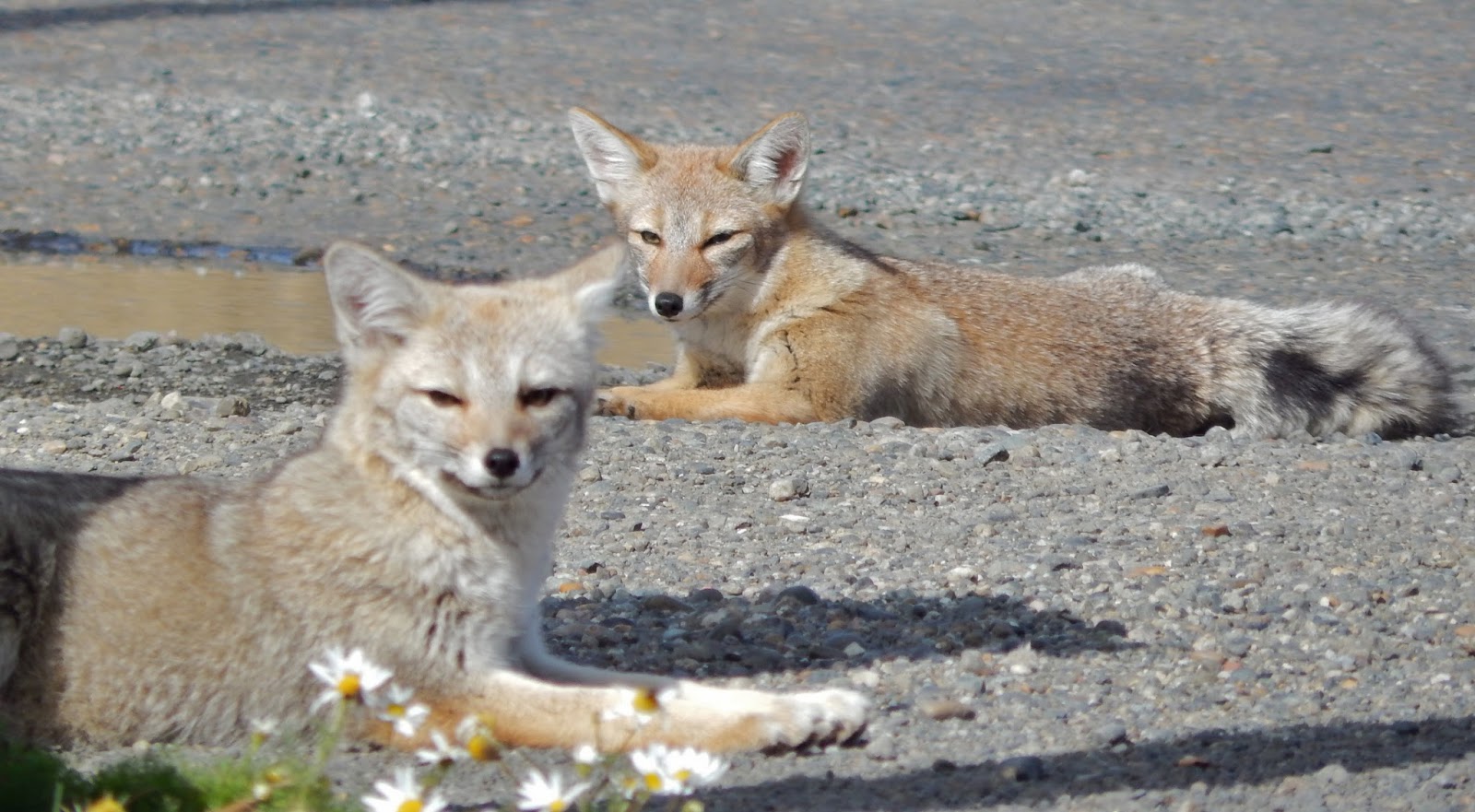 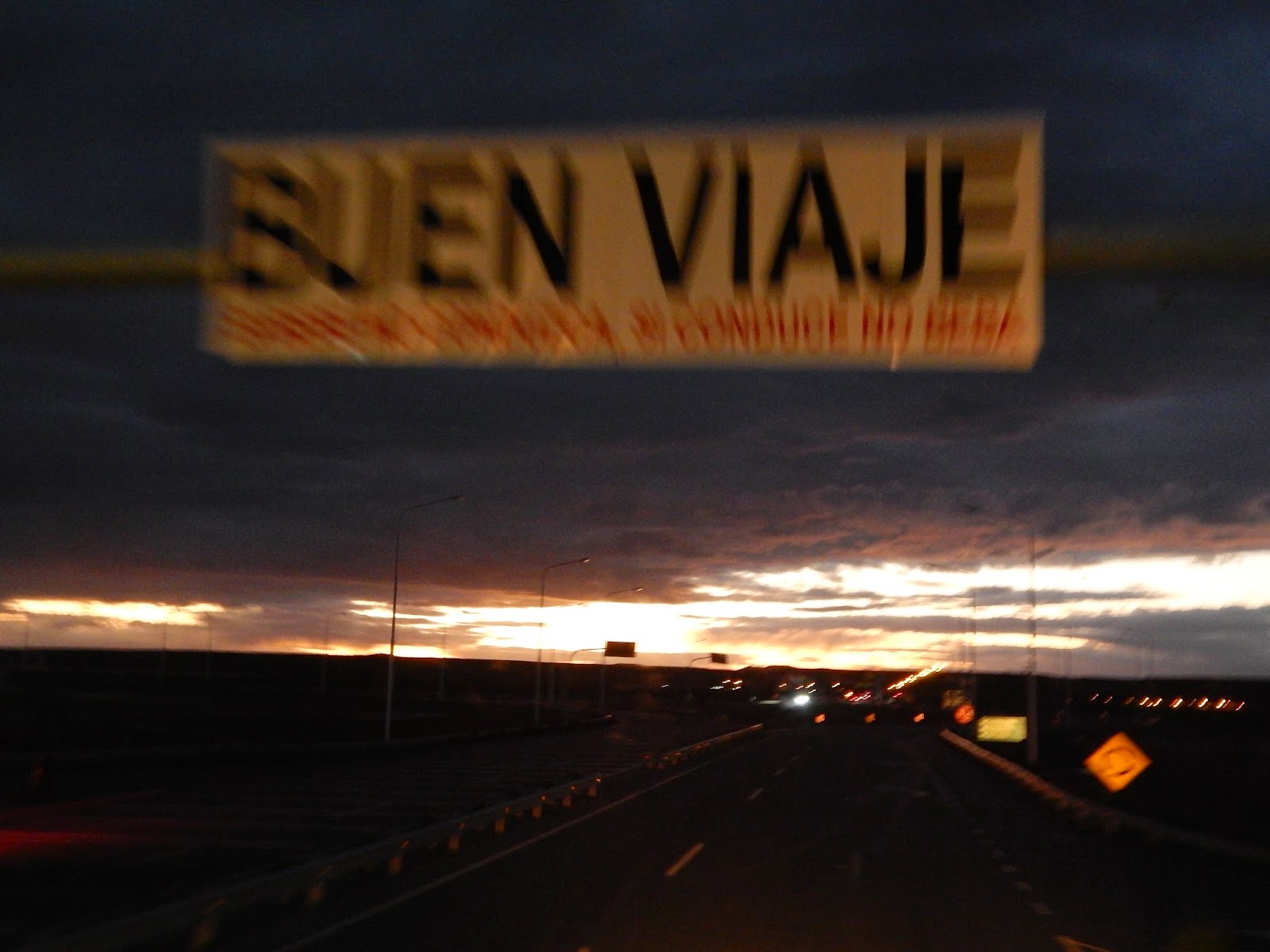 We're going on a 31 hour bus trip, we're gonna take our devices...
With an improved road and no more borders, we sailed into Rio Gallegos around 4 pm. Here, the great pit stop of Argentina, is where we would change buses and continue on. We'd been assured there was nothing worth hanging around for. With four hours to kill and empty stomachs we were thrilled to discover a huge grocery store directly across the street from the station. We gathered rations, added in a roasted quarter chicken from a surprisingly nice family 'fast food' restaurant across the street, and settled in for our layover. Many games of Go later, we were boarding our enormous double-decker bus and cheering over our front row seats.

We're going on a 31 hour bus trip, we're gonna take our sense of humour...
Whether from exhaustion or just plain surprise from our unexpected great seats, our moods shifted abruptly and we danced along to the top hits mix that was blaring from the TV in front of us. It felt like the equivalent of first-class seats on a plane with our wide chairs that laid nearly fully back, and roomy foot rests on the window sill. The huge front window allowed us extraordinary views out the front and sides and we were quickly served dinner (definitely not first or even last-class quality on a plane, though!). We waved goodbye to our friends from Antarctica who had traveled with us that far, Tessa and Arjan. 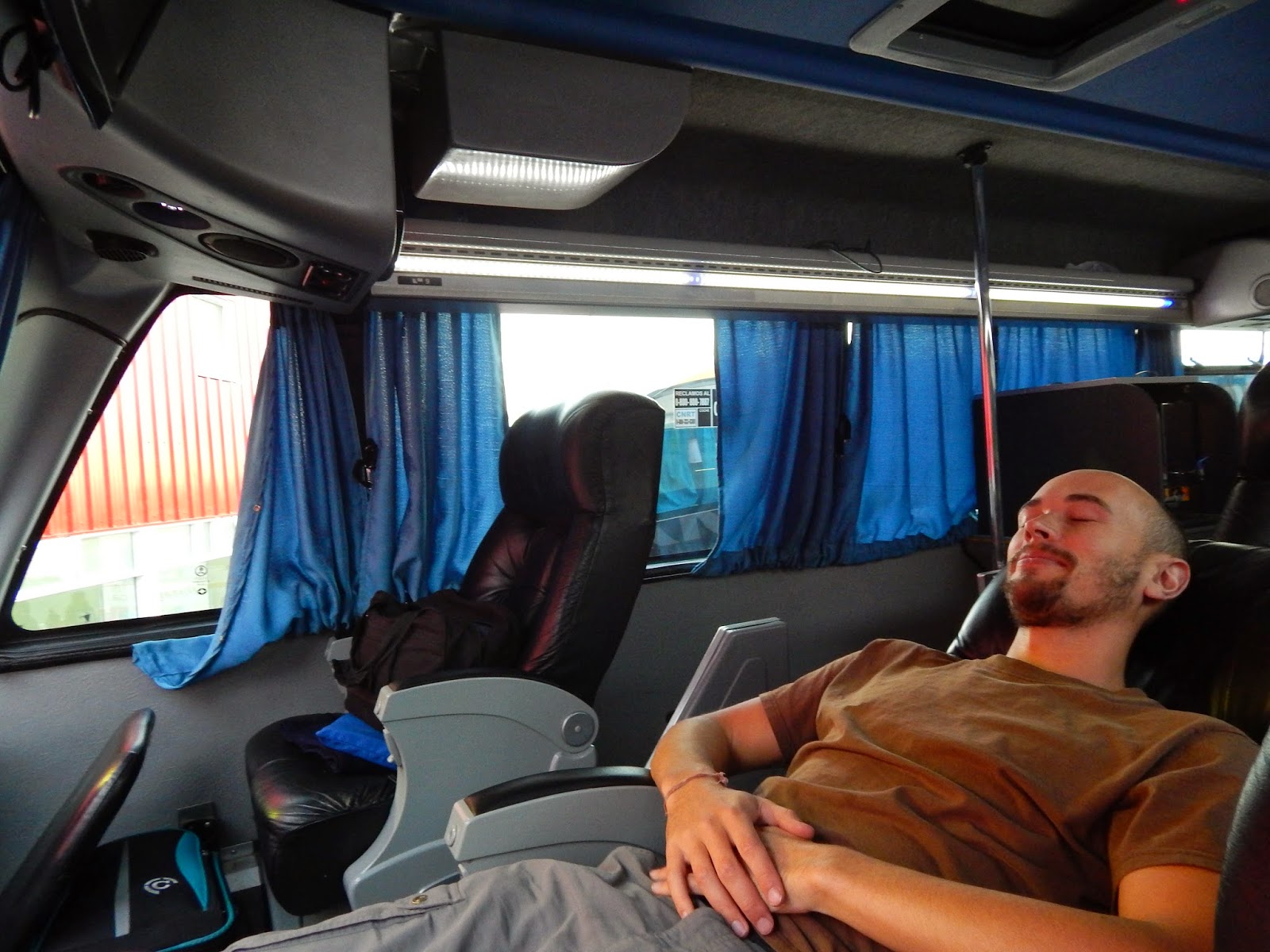 We're going on a 31 hour bus trip, we're gonna take our ear plugs...
After a movie, we were ready to try to sleep again. The roar of the huge bus bouncing along the open road helped drown out the music coming from the driver's cab below us. The potentially frightening sway that came from being up top in the bus actually felt comfortably familiar after our fortnight on water, so we slept reasonably well through the night. We awoke to more barren landscape and began to appreciate the vastness of wild Patagonia.

We're going on a 31 hour bus trip, we're gonna take our flexibility...
We arrived in Trelew feeling successful. The weather was beautiful and we felt strong enough to walk around town to find our hostel. The highly residential area had us a bit thrown but Trelew isn't very touristy to begin with, so we tried to think nothing of it as we double-checked the address and rang the bell on an unmarked door. With no answer, we asked next door and felt relieved when he nodded and said, 'Si, el hotel,' then proceeded to call his neighbour.

The hostel owner came to pick us up looking confused. He explained to us that he had rented out the rooms long-term to some students and had no availability, so Booking.com must've made a mistake. It would have been easy to collapse into a puddle after such a long travel 'day,' but we pulled through and remained calm. He lent us his phone so we could call around for a room and we walked back past the bus station to our new hotel. We'd made it!

We'd gone from the Antarctic continent to Trelew (a difference of 22° of latitude, half the distance between Toronto and the equator) in just four days. If we kept that pace up, we could be in Canada in another two weeks!