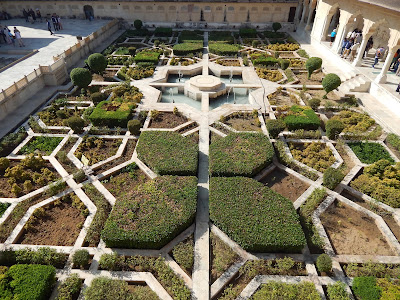 Arriving in Jaipur was much more relaxing than Agra, even though we were told to get off at the wrong stop. We were able to arrange an auto from the pre paid ticket window and found our hotel without too much trouble. The traffic was the wildest we'd seen so far in India, and perhaps all trip, with the exception of Addis, but Pearl Palace was set on a quaint little side street. Our third floor room was quiet from traffic, and the home of a delightful family of pigeons who cooed loudly each morning and likely spread dander throughout our stuff. The rooftop was serene and served up the best food in town. 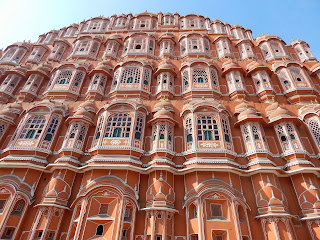 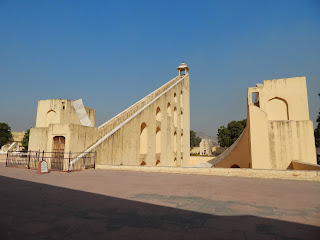 With two days to spend here we were able to take it easy with two full mornings of sightseeing and the hot afternoons left for relaxation and planning. The first morning we set out for the Pink City, the old part of Jaipur where laws dictate that all buildings are pink.

The first stop was another Jantar Mantar, built by the same man, Jai Singh, as the one in Delhi (plus three others); Jaipur's is the biggest and best preserved site for cosmic calculation. We discovered that the tall tower is built so that the shadow from the sun moves one millimeter per second. It was neat to watch plants get enveloped so quickly in shadow and we mourned the loss of our video camera's time-lapse feauture. 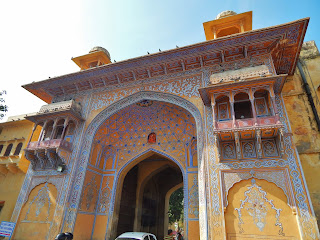 Next, it was on to the City Palace. Far from falling apart, this ancient building is still in use and the home of the descendants of Jaipur's royal family. We marveled at the Mubarak Mahal, or Welcome Palace, and its beautifully carved archways. We saw the two largest silver objects in the world, 1.6 m tall vessels that the Maharaja Singh II took to England with him, full of the water from the Ganges. Then we passed under the great peacock gate (autumn), and those of the other three seasons that adorn the palace's inner courtyard. In each art gallery we found ourselves looking more at the lavish decor and painted/carved ceilings than any of the paintings. On the way out we caught a puppet show and a snake charmer charming some lethargic cobras. 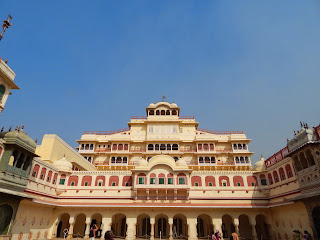 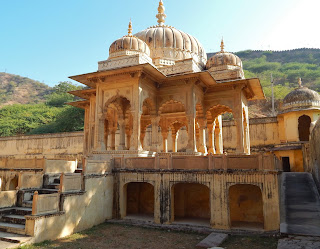 The second morning we started at the Royal Gaitor, where many great maharajas are honoured through impressively carved marble cenotaphs. We strolled through the three sections, all void of other tourists and had a bit of a scare from a protective mother monkey who obviously wasn't used to humans visiting this off-the-beaten-track attraction. The carvings were exquisite throughout depicting elephants, lions, and horses. It was here that we got our first views of the "Great Wall of India" as our driver called it that wound its way through the hills connecting all the sites we would visit that day. 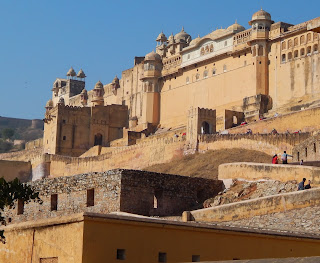 Next, we headed outside Jaipur proper to the original capital of Jaipur state, Amber, to see the fort and palace. We chose to walk rather than ride one of the unfortunate elephants, though we still got a 'too-close-for-comfort' experience when trying to enter the main courtyard from the same gate.

Inside, Erin was most intrigued with the veiled marble screens upstairs, where the women could watch the happenings away from prying eyes. Craig appreciated the sheer height of the fort walls rising out of the rocky hillside. 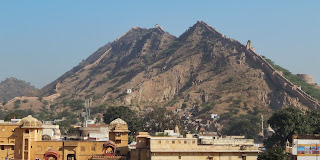 We also spent some time gazing at the Hall of Victory's mirrored walls and ceiling. 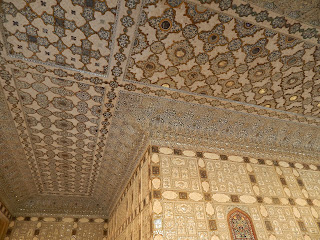 Up the windy hill that our auto driver took with impressive, body-jarring speed, was the Nahargarh Fort, or 'Tiger Fort.' It seemed connected to Amber Fort by a wall reminiscent of China's. It was mainly falling apart, but offered views of the new and old city from its roof. 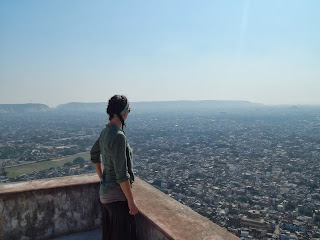 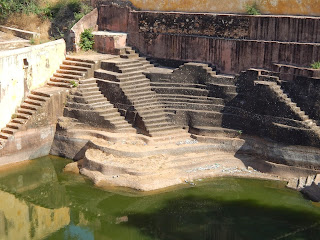 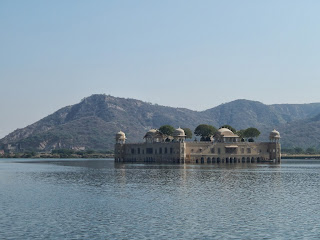 On our way back down the hill we stopped to admire the view of the Water Palace, built as a vacation spot for one of Jaipur's kings (he would notably come here without his family for some debauchery). It is no longer in use but we noticed some boats taking people over to tour it. While looking out over the hillside, something drew our attention away from the palace... a peacock came gliding down the mountain just above the treeline. Its regal body soaring, stunning wings trailing behind, was an astonishing sight, and made for the perfect ending of our day! 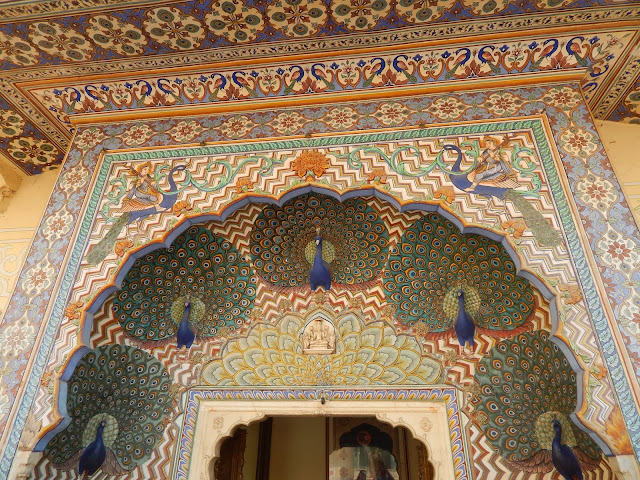