Our first glimpse of Reunion was stunning. It seemed to rise from the depths of the sea and head straight for the sky. From our seats, the plane skirted over the ocean, getting closer and closer until the land suddenly appeared beneath us moments before landing. Leaving the airport, we followed the coast (the ring road absolutely stuffed with cars), and saw the waves crashing into the volcanic rock the island is made out of. On the inland side, a massive rock face rose above us to a cliff. We watched the sun set deep into the ocean, Erin catching a glimpse of the 'green flash' we'd been searching for.

It didn't take us long to feel accustomed to the regular comforts of home. Our first accommodation was impeccably clean, and the large, comfortable bed with fluffy pillows was enticing as no mosquito net hung above it (Reunion eradicated malaria about five years ago). The water was filtered, we were able to eat salads, and the wine was tasteful. 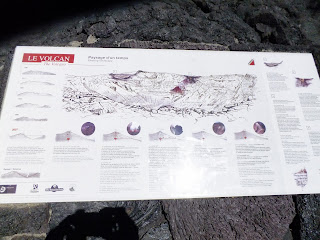 Erin celebrated her birthday while we were there, and she had just accomplished her goal of 20 countries while she was 30. Knowing we wouldn't have much time on the island, we had narrowed our activities down to two main attractions: climb 'The Volcano' and visit the stunning valleys and gorges surrounding the island's highest peak.

For Erin's birthday, we tackled To-Do #1. It was an expensive endeavour, as everything was in Reunion, but we arranged for transportation to take us to the trailhead (getting there ourselves was out of the question, as public transit drops you off 25 km from the start!). We joined the hoards of people heading down the trail towards the volcano across the valley. 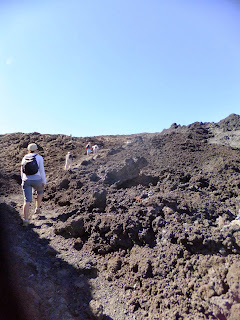 The Volcano (actually named Le Piton de la Fournaise) used to look different (see above). In 2007, there was an eruption causing the crater to collapse, and the lava left a valley of hardened lava. It also prevented visitors from walking around its summit. Approaching the volcano from the west, our hike would be 580 stairs down to the valley, across the hot, hardened lava, up the volcano's side, and around to the Eastern summit (the section in front of the plain was not safe for summiting, so discouragingly, every time we thought we were near the summit, we would round a corner to see we had to head back down before proceeding up again). Then, of course, we had to go all the way back, including those 580 steps up at the end!

The weather was clear and beautiful for views, meaning we had hot sun on our backs, and faces from it reflecting off the black ground. It is important to note (for our mothers) that this volcano, though active, is very safe! It is not explosive, and is constantly being monitored. We were reassured that should there be any activity, helicopters would fly close to the peak and relay a message to hikers via megaphones that they needed to get off the volcano. Thankfully, this did not happen for us. 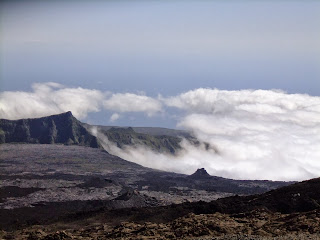 The hike seemed simple enough, until we started curving further around the side rather than mounting higher, and our stomachs rumbled from leaving at 6 am without breakfast. Our snacks of candy and chips didn't do much to mask our hunger. But we continued all the same. We felt great when we neared the actual peak, and were excited to look into the huge beast together. It took great self-control to swallow our disappointment when we saw there was no red lava bubbling inside, but just a great big pit of volcanic gravel. HOWEVER, the views were gorgeous and we enjoyed a snack and break all the same. We were proud of our pace, and beat our driver's time by 45 minutes! 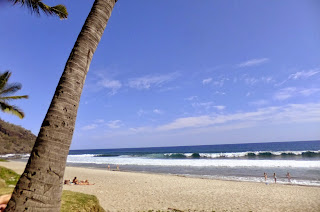 Upon hearing it was Erin's birthday, our lovely driver generously dropped us off at one of the most beautiful beaches on the island, where we relaxed for the next few hours. There was a small swimming area built to protect bathers from sharks, and a hot sandy beach and shady park to relax in. We watched nervously as two surfers ignored the warnings, but the most excitement we saw was a few good tricks and spills. The views were breath-taking, complete with huge crashes of water against the cliffs, supporting a five-star resort above that is frequented by former president Nicholas Sarkozi.
Posted by Craig & Erin at 4:22 AM

Email ThisBlogThis!Share to TwitterShare to FacebookShare to Pinterest
Labels: 07. Reunion