Day 118: Elephants in the Mist 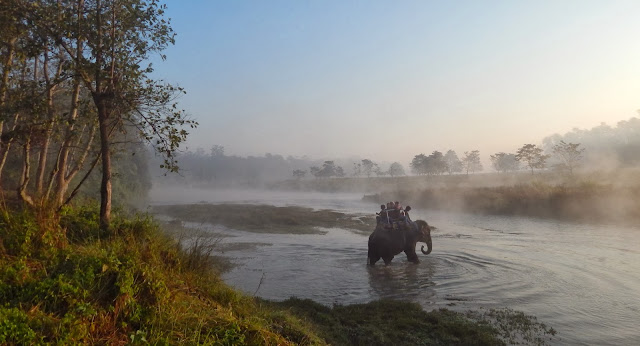 Having already done canoe, walking, and jeep safaris, only an elephant safari was left. We were up early and by 6:20 we were bobbing along on the back of a huge pachyderm by the name Basanti. When she started to wade into the river we were a little worried, not knowing how deep the dark water was and whether this elephant ride would leave us as wet as the previous one. After a quick stop so Basanti could have a drink we continued; the water at its deepest getting waist deep (for an elephant). 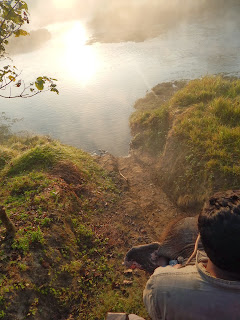 It was a very peaceful way to experience the jungle as we made almost no sound, save for when the gap in bushes and trees proved too narrow for us. We saw a few deer and crossed the river again (roughly where we had seen a tiger the previous day). On the opposite bank we passed fresh rhino footprints on a muddy slope. As we worked our way up the hill, a loud slurping sound startled us from below. Looking down we saw that our elephant was sinking down just over a foot into the mud with each step, and more surprisingly the elephant behind us was using the holes already made by Basanti just as we would in fresh snow. 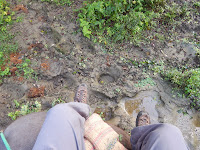 Once back in the jungle, it wasn't long before the elephant rider, or "mahout", spotted a rhino sleeping in a bush. Once we were closer a baby also became visible. They were completely undisturbed by our presence and did little more than lift their heads to get a brief look at us. A little further, we saw another rhino sleeping in a meadow. 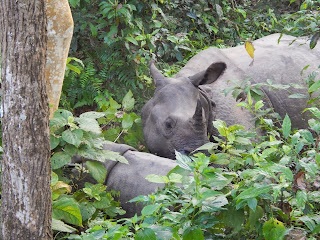 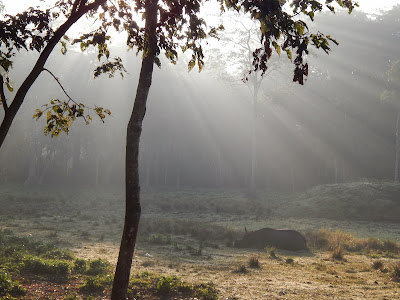 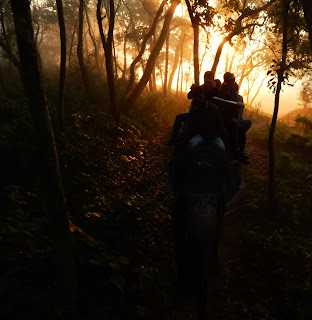 We tried our best to enjoy the experience, and it was absolutely magical, but it was difficult to set aside the conditions we'd seen earlier on our trip, and ignore the treatment of the elephant by the rider. His "tools" were grotesque metal hooks for ensuring she went the right direction, and his strategy for getting on was to hold onto her ears and walk up her trunk. Admittedly, it was a real moral struggle for us to decide whether or not to do the ride at all, but it had a real appeal, and we gave in to the idea. It would be difficult to convince Erin to do it again. At any rate, it was something to ponder on our bus ride back to Kathmandu. 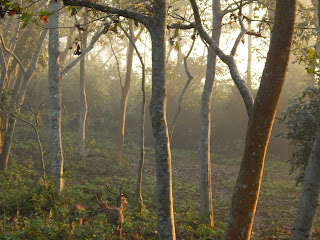 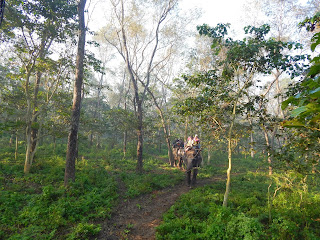 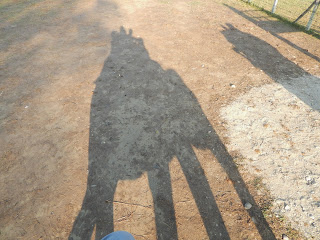