For Erin's birthday, her family treated her and Craig to the 'Experience of a Lifetime" by paying for their flight to see Mount Everest. It came with the promise from the airline that if the weather was bad, and the flight cancelled, there would be a full refund or exchange of seats for another day.

It turned out that we would have first-hand experience with this claim. We awoke at 5am, met our taxi driver and headed back to the Kathmandu airport. We secured seats on the first mountain flight out (6:30 am), then sat down to watch the sunrise. Only, what we did see in the growing light was fog so thick you could slice through it with a hiking pole. By 8:45, we weren't sure if we wanted to announcement to be "cancelled" or still "delayed" but shortly after 9 am, flights started boarding and we were on our way.

"On our way" was still relative. It entailed sitting on a bus for a bit, then sitting on the plane for a while (for some reason they felt that planes that actually had a destination with regular passengers should get to go first!), but somewhere around 10:00, we buckled our seatbelts and our propellers started turning. We hit the runway with a terrifyingly slow speed, but Craig reassured Erin that we were going to the end so that we could turn around and come back again the other way. He was thankfully right.


We flew first through the haze, then were able to watch Kathmandu unfold beneath us. A few white fluffy clouds spotted the horizon. Then something caught Erin's eye and her stomach flipped. Looming above the city, above the horizon, above the highest of clouds, was a wall of imposing mountain peaks. It was a powerful moment (and this is coming from Calgarians who see the mountains every day)! 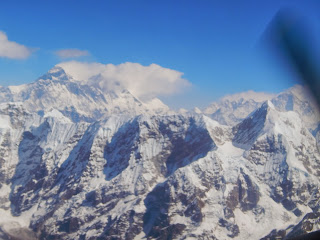 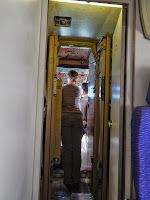 We had seats in the first row, and we each had a window seat, so we compared views, then sat together on the side with the best view of the Himalayan range. Craig snapped photo after photo, and Erin gleamed with excitement over getting to be the first passenger up in the cockpit! The pilot directed her eyes ahead, pointing to two peaks. "The one on the left," he said, "is Everest." She marvelled at the sight they see every day.

We flew out until we were just passed Everest, then banked swiftly, and returned with views on the opposite side of the plane. By then every passenger had had a turn, ending with Craig, who had to crane his neck in order to see the giant. 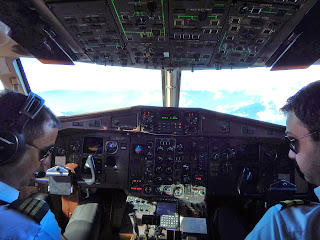 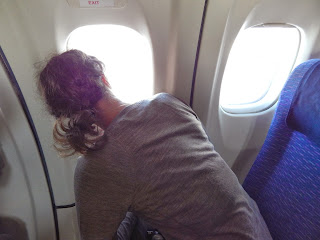 It was definitely worth the hours of waiting!

We had completely missed breakfast and restaurants were on to lunch by the time we got back. One place we wanted to visit was the Garden of Dreams. It was built in the 1920`s by Field Marshal Kaiser Shamser to complement his palace. The gardens are modelled after many Edwardian estates in England and offer a haven from the hustle and bustle of Thamel. 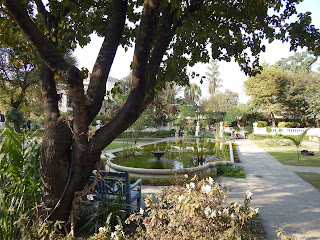 Lunch was delicious, the gardens delicate, and we passed a relaxing afternoon there, followed by drinks on a rooftop patio nearby. We felt that we were starting to get over our jet lag and settle into the rhythm of avoiding motorcycles, navigating the winding streets, and finding water at a local price. An added bonus was a cheap grocery store that sold wine, gluten-free cookies, assorted nuts, and playing cards. We've now got 52 scenes of Nepal to play through looking for sites to see.