Day 94: A Ride Through Reunion 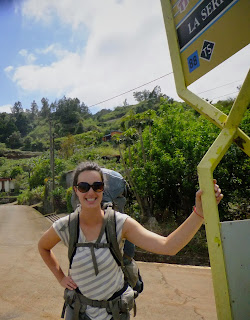 Our flight to Mauritius wasn't until 4 pm, so we wanted to make the most of the day, even if it meant that our big bags would be in tow. Hiring a car up to the mountains wasn't a possibility financially, so we took advantage of the amazing transit system and settled in for the best bus ride either of us has ever had!

We had wanted to visit Selassie, riding around the south coast then up into the hills, but because of scheduling we ended up heading towards Cilaos, which did not disappoint. We waited eagerly in line at the bus stop, grabbed the two seats up front and soaked in the scenery through the big windows in front, and on either side of us.

The route started by passing through the hub St. Louis, then by increasing smaller towns. We gained altitude and were provided with a glimpse of the outstanding views ahead. A windy road led us through impossibly steep valleys, along perilous cliff sides, and through tunnels so narrow that the walls were inches from our faces. It was the only time we'd ever seen someone use their rearview and side mirrors to see ahead on the road (can you picture a hairpin turn so sharp that you understand what we mean?). Only once did the driver need to put the bus in reverse in order to make a corner, and he received several "Bravos" for what was undoubtedly the single greatest display of drivesmanship either of us has ever seen. (We would have clapped if it wasn't the Reunise way of indicating it was your stop). 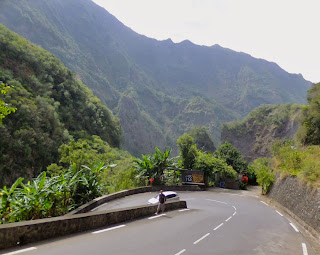 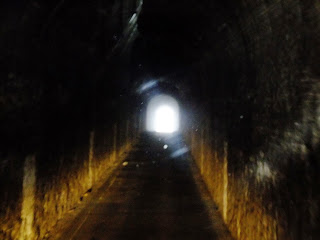 At the end of the line, we got our workout by heading uphill with our year's worth of stuff to find a restaurant. As if the astounding mountain views sprouting up from every corner of the city weren't enough, the town had a lovely lake complete with fountains in its centre. What a lunch we had! Then it was back down to the station, over to the airport (sadly forgetting our video camera on the bus on the way), to leave for country #8, Mauritius! 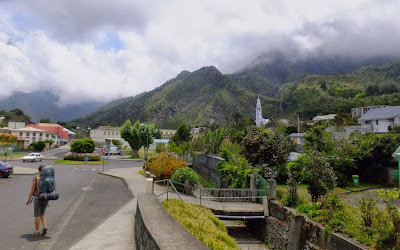 Email ThisBlogThis!Share to TwitterShare to FacebookShare to Pinterest
Labels: 07. Reunion