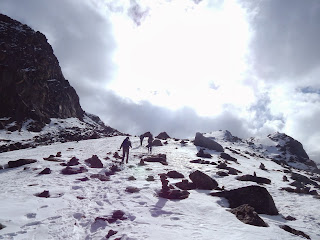 This was the big day - the day we would hike through a Himalayan mountain pass. Despite being together, with our team of two, it was an isolating experience thanks to the unforgiving wind that whipped away any words we tried to call to each other. We thought it therefore fitting, to share our own thoughts separately from this experience.


Craig:
Having slept in a sleeping bag, with two heavy blankets and three layers of clothes on while using a "Hot Paw" in my socks and still being cold all night I was anxious to get going. Thankfully there was a fire just before we left so I was able to warm up a little. I stopped as always to take some pictures around the lake, the trail was pretty easy until we reached a river crossing where all the stones were covered in ice.

After crossing we started to go straight up the snow covered slope. Now a biting wind was easily gnashing through our little woollen gloves. I picked up the pace to try to stay warm, passing our guide who had to backtrack to retrieve his hat that had blown off. At this point I had my poles under my arm so I could have my hands balled up in my gloves. The trail was not perilous at this point so it was an easy decision to go for warmth over stability. 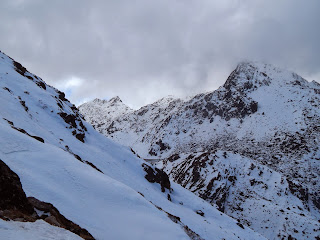 We reached a small lake at about 4550m and as the trail continued to climb the visibility got worse due to the blowing snow and the edge of the path slid into a steep incline of hard frozen snow down to the lake. I decided to go back to my poles, this lasted for about 4 minutes before retaining all my fingers had me with my hands balled up again.

The wind grew ever stronger until we reached the pass, where I ran out of memory and had to change SD cards. I decided I would just remember what it looked like. 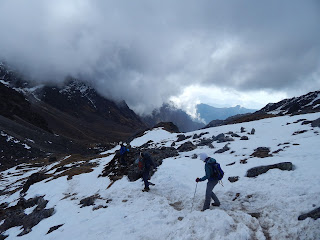 From the pass to Phedi it was a descent of nearly one kilometre. The pain in my knee having been bothering me a little the day before came back with a vengeance as soon as my fingers warmed enough for my central nervous system to be aware of other parts of my body.

Erin:
We hadn't slept well in days because it was so cold in the evenings and overnight. Gosaikunda, though beautiful, was treacherously cold, and we'd been hiking only minutes when I felt like my hands were going to fall off. I was angry that we were so unprepared for the temperature, mainly because I had warmer clothes in my bag (a down jacket, and a second pair of gloves), but we'd been told, "there might be a little bit of snow," so we didn't think it would be nearly as winter-like as it was (probably -15 degrees C with the windchill, and it was snowing lightly). 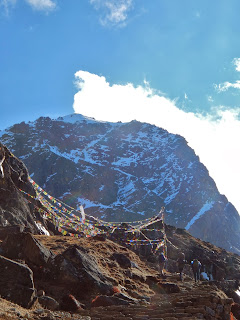 We climbed up some stone steps, then it was straight into the pass. I had my eyes trained on what looked like the peak above me and gritted my teeth and kept going. When I reached that peak, I was able to see the path beyond, not down to the other side, as I had hoped, but further up, into the windy, snowy pass. I'd say, 'I just about cried,' but that would be a lie... I did cry a little. It looked like so much further to go, and my hands were so cold already I couldn't move them, and it was slippery, and the altitude was so high that it was hard to breathe enough without the biting wind whipping away each breath... I thought I was going to collapse in the snow in a full-blown panic attack. But then I had a tiny little thought as I looked up. 'I was hiking through a mountain pass in the HIMALAYA. The highest, most unforgiving mountain range in the WORLD! This wasn't Everest, but Everest wasn't that far away from us! It was SUPPOSED to be hard!!!'

Plus, I had started this strategy back in Calgary, six months before I left for the trip. I was worried that the gorilla trek in Uganda was going to be really hard, so we tried finding hikes to do in the Rockies that were really steep as a way to practice. And when it got hard, I'd chant to myself, "Gorillas, Gorillas, Gorillas" for motivation. It really worked! So after the gorilla trek, I realized that I needed a new goal, and the trek through the Himalaya seemed like the perfect one. So all through Madagascar, every time we'd go for a hike, and things got difficult (like our Peak Boby trek!), I'd chant in my head, "Himalaya, Himalaya, Himalaya." 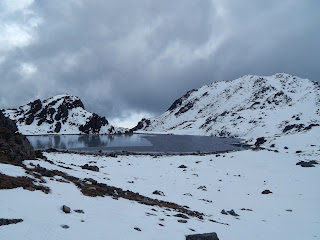 So here I was, trying to make it through this mountain pass, when a tiny voice in my head said, "Himalaya, Himalaya, Himalaya," and I realized that I had been preparing for this for the past two months. I KNEW it was going to be hard - really hard, and I had done other treks to prepare myself for it. So yes, it was going to be really difficult for a little bit longer, but then I would make it. I would get to the other side. And that made me smile and keep going.

Plus, there was another little voice in my head that tried to be rational. It said, "What do you want to happen here? If you sit down in the snow and cry, they are going to think that you can't do this, and you'll have to go back down the way you came, back to the beginning of the trek. Is that really what you want? Or, you could go just a little bit further, and the hard part of the trek will be over, and you will get to go down the other side." That definitely made me keep going.

Now, I'd like to say that it was that easy, that I finished the pass, and the rest of the day hiking without any other moments where I wanted to give up. But truthfully, about five minutes later, I was in tears again when I slipped on some ice and fell on my shoulder. And then again ten minutes after that when my hands were so cold I had trouble using my poles and I was worried I might slide down the slope. And fifteen minutes later, when I yelled at our guide for being BEHIND us when the trail was hard to discern, and for assuming that anything wrong was "headache?" and the cure was "rest, we go slowly slowly." But, I did it. And I can hold on to that moment of good perseverance for future struggles to come. Then the best thing of all? Despite it being so difficult, and feeling a little embarrassed about not handling it better, it is now one of the things I am the most proud of myself for ever doing.