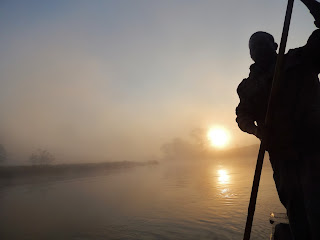 It was a chilly ride to our entry point for the river in the back of a pickup truck at sunrise; even though temperatures exceed 30 in the day, they still drop below ten in the early morning. We quickly loaded into a canoe and our polesman pushed us out into the current. 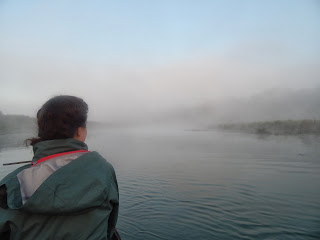 The mist was eerily beautiful as it enveloped the shores, dragging them into obscurity and then relinquishing them. At the same time creating a magical environment and teasing us with clear views of the abundant bird and wildlife.

At river's edge we spotted three different kinds of kingfishers, bobtails, herons, and many other birds before in the distance we caught a glimpse through the fog of a large family of deer.  We had a serene moment where they stared back at us through the cloud but once it had cleared they nervously scampered into the bushes. Rounding the bend in the river we kept searching for rhinos, elephants, or other animals of interest along the banks. The dense jungle compounded by the thick fog frustrated our searching eyes. 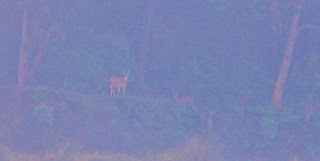 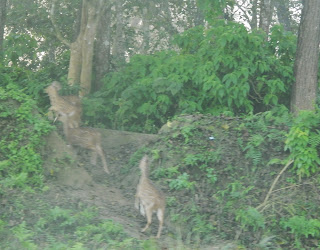 After our African safari we had had our share of false alarms, so it was with cautious optimism that we watched the most majestically shaped log we had ever seen on a tiny pebbled island in the river. When it turned its head to look at us Craig, maybe not as quietly as he should have, exclaimed "Tiger!" This was seconded by the guide. We briefly lost sight of it due to another island's bank and then we got a brief look as it moved into the river, shyly retreating into the jungle, before we passed behind another bank. By the time we came out on the other side there was not a sign of the tiger besides a fading ripple in the still water. In our awestruckedness we did not take any pictures but the image of the long powerful back angling out of the water through the mist as its head slowly cocked towards us will stick with us for a very long time. 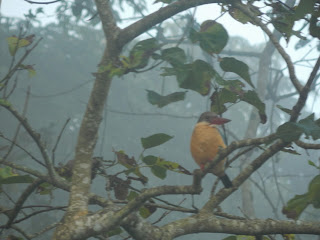 After seeing the tiger it was slightly harder to get excited about seeing another species of heron, but the canoe ride was still a tranquil delight. We disembarked at the elephant breeding centre where once again the elephants were in chains. From here it was off on our walking safari. Somewhere between being told about all the people that died last year on the hike, and a refresher on what to do if any of the 5 different aggressive, dangerous, animals attacked, Erin decided it wasn't too late to speak up for this not being something she had wanted to do in the first place. She was able to get picked up by our hotel manager and instead enjoyed a relaxing and safe nap back in our bungalow. 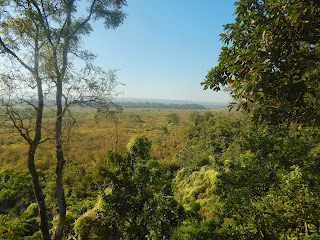 Craig and Linda, the Dutch woman who arrived the same day as us and would accompany us on all our Chitwan adventures, ventured off into the jungle protected by Chandra with a medium sized stick to protect us from sloth bears. We saw many deer (spotted and barking), some monkeys, and a few wild boar. Our brief uneasy excitement came when we heard a series of loud snorts from the bushes to our right, in which we were informed was a Sloth Bear. Chandra went into the bush snorting back to see if we could get a look, but it had already fled into the forest. Craig and Linda hung back, formulating a defence plan just in case.

For much of the hike we appeared to be on the heels of a rhino as we walked over fresh foot prints in the mud, pushed through mud covered bushes and past large piles of fresh waste. No rhino was found though and after a few hours of scrambling through mud and bush it was off to take a bath with an elephant. 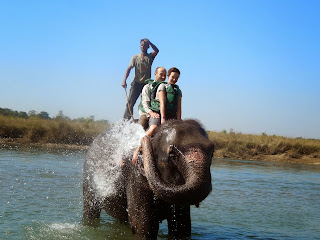 The term elephant bath pretty well describes what takes place. Erin and I hopped onto the back of Kaleesha (?) and the elephant rider shouted commands to her to spray us repeatedly with her trunk. To make sure we got appropriately clean, the elephant then knelt down and rolled over throwing us into the crocodile and elephant dung infested waters. We had a great time and did our best to keep our mouths closed throughout. 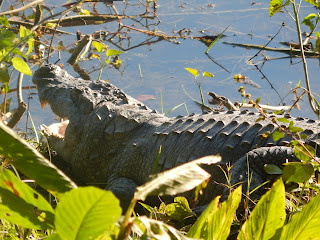 For the afternoon we went on a jeep safari. This was supposed to be the best chance to see (more) tigers, and other animals such as wild elephants and rhinos that tend to live deeper in the jungle. The road was in good condition and the weather was nice, making it seem like a relaxing Sunday drive in the country. Aiding that feeling was the lack of any impressive jungle life. We saw relatively few birds, got a few fleeting views of deer, and saw a chipmunk or two. Near the end, we at least got the excitement of seeing a huge troop of Rhesus macaque monkeys AND a flock of wild chickens! 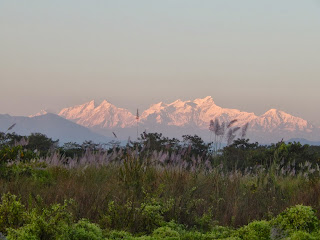 But the wildlife didn't stop there! We didn't even have to leave the block our hotel was on to see a small python that had slithered its way into someone's house. Our hotel owner excitedly took us over to see it as he and other villagers attempted to gather it up in a bag to take back to the park's grounds. 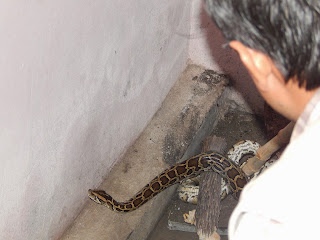 All in all it was an amazing day and an experience we will not forget thanks to our tiger friend.
Posted by Craig & Erin at 1:27 AM