Still feeling a bit exhausted from our long travel day, we tried not to overwhelm our schedule. Our one big task for the day was to drop off our visa applications at the Indian Embassy, then we thought we'd laze around and maybe visit a quiet garden area with internet.

Things didn't quite go as planned. We joined the throngs of people waiting for their turn to drop off their application, then Craig was told he needed to do some rephrasing to make 'underemployed' sound a bit more acceptable. It was well after lunch time when we finally were able to leave, so we just wanted to grab a taxi and get back to our hotel.

We found one waiting right outside of the embassy and got in and gave our directions. It quickly became clear that the driver didn't know where he was going and he tried to turn the wrong way at the end of the street at a major road. Unable to give him directions, we exited the cab and decided to try walking.

We paid him 7% of the rate, despite our short distance, yet he still insisted on the full amount, roughly $1.50. The driver proceeded to follow us, first by car, then on foot, demanding that we pay our full fare, even though we'd only gone half a block.

This escalated to the point that we were able to pick out threats in the driver's broken English, with Craig offering to bring the police in if he preferred they settle it. He followed us for another few blocks, then deciding that the small fare wasn't worth the stress and aggravation caused by the situation, Craig crumpled up 100 rupees (~$1) and threw it on the ground. The driver picked it up and left apparently satisfied. 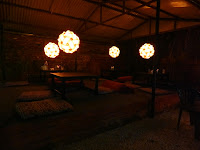 To recentre ourselves, we attended a CouchSurfing meet-up that night to surround ourselves with like-minded travellers. We were reassured that our experiences today were unique and that Nepali people are kind and humble. We enjoyed exchanging stories and learning tips about South America from a fun couple who have been living abroad and travelling internationally at length.
Posted by Craig & Erin at 8:12 PM