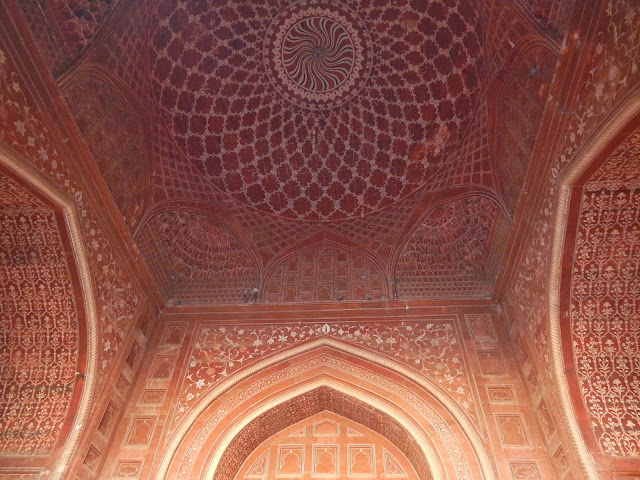 Our bus to Agra arrived in the evening after a leisurely drive down deserted highways. When we arrived the buses near-empty interior clashed with the throngs of people lining the roads and the menagerie of different forms of transport competing for precious space. We found an 'auto' and sped through the streets weaving between rickshaws, cars, cute minibuses, horse-drawn carriages, camels, and people. 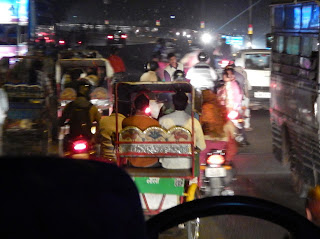 Our hotel boasted a rooftop restaurant with great views of 'The Taj' but as it's not lit up at night, it was nowhere to be seen. That is until the lights in the hotel went out for a few minutes as we ate, and in that time, our eyes adjusted to the darkness and we caught a glimpse of its mystical outline towering over the mist. Erin quickly hid her eyes because she hadn't wanted to see it until we walked through the gates the next morning at sunrise, but admitted giddily that the momentary view had been exhilarating.  Craig, on the other hand, managed to get a few shots that showed it almost 'too well' that he hid from Erin. 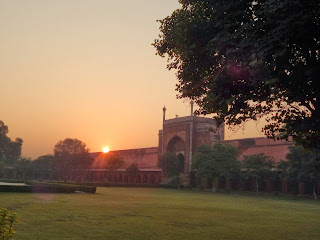 We were out the door at 6, and made our way to the south gate, supposedly the most dramatic, as when you enter, you're staring directly at the taj head-on. But our guidebook neglected to mention that this is the only gate that opens at 8, instead of sunrise. So we unfortunately walked all the way to the west gate instead (the furthest from our hotel), to enter there, the busiest gate. After an incredibly frustrating, gender-biased line-up, where we lost two of our precious gluten-free granola bars, we were in. Putting aside our negativity, we took a deep breath and looked onwards. 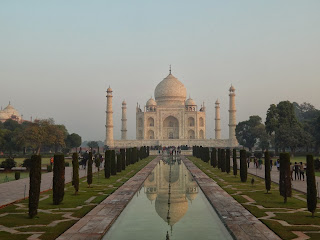 It's weird... You've seen the picture a million times and you know it is the Taj Mahal, but it didn't look like it. Standing behind people who were taking pictures of it, you could see in their viewfinders that that's what it was. But the enormous building in front almost looked out of place without being framed at its sides. The varying colours in the marble, the increasing size in the Sanscrit calligraphy so it looks equal from afar... Every little detail was visible up close. It's symmetry was perfect.

We read many interesting facts and theories, both before and during our visit, i.e. the minarets are outward leaning so as to protect the Taj in the event of an earthquake.

The only annoyance of the visit were the photos that some of the young male Indian visitors kept taking of Erin. She stood up to one man, in front of his buddies, and asked him to delete a picture he had blatantly snapped while we were posing together. The stares from the men despite her conservative outfit were also unsettling. She also regretted wearing white that day as Craig told her she didn't stand out enough in front of the building! 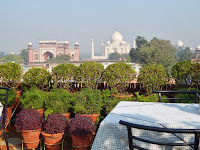 After our fill, we ate breakfast nearby at the hotel with the 'best Taj views in the city,' then returned to ours for a relaxing rest of the day. Near dusk, we moseyed down to the river where we found a polesman to take us out for a unique view of the mausoleum. We couldn't believe we were the only people out there! We've had a lot of bad things to say about Lonely Planet on this trip so far, so it's important to mention that on this occasion it steered us well. 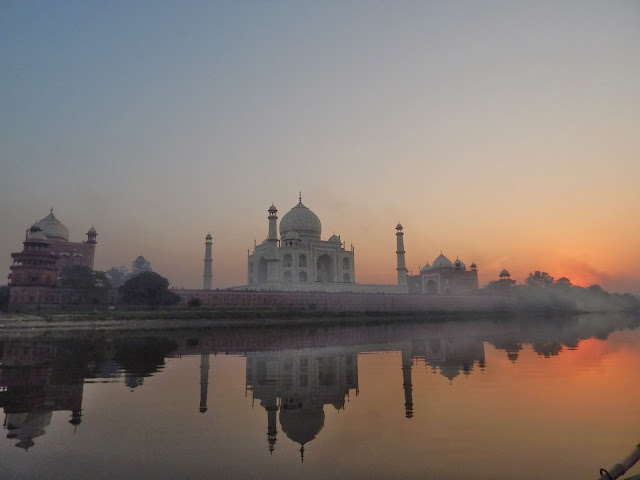 The next morning we grumbled at our early alarm, but managed to pull ourselves out of bed again for sunrise, this time from our own hotel's unobstructed views. Craig had splurged when booking the room for a room with a view, so watching the outline appear in the morning light was the motivation we needed to get the day going. It was a wonderful visit of the most beautiful building in the world!
Posted by Craig & Erin at 7:24 AM