Day 104-106: Festival of Lights and Buses Crammed so Tight 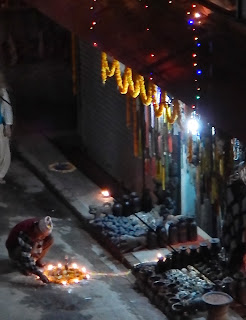 The next couple of days were rather uneventful. We spent much of our time organizing photos and searching for a wedding venue. We'd get out each day for a couple of delicious meals and see the progression on the Diwali decorations. Beautiful 3D paintings of beans, flowers, glitter, and paint appeared in the streets in front of every shop, with little candles lit up at night. Kids carolled in the doorways of stores and restaurants... It was a beautiful festival! We became more comfortable navigating the windy streets of Thamel and dodging rogue motorcycles became instinctual.

On our seventh day of Leg 3, we rose at 6:30 to finish the last bit of packing for our trek. The bus taking us to Dhunche was supposed to leave at 8, but at 6:40 we had a knock on our door telling us it would actually be leaving at 7. We did our best to hurry, but there was no way we would make it on time. In the end, our taxi tracked down where the bus was in the outskirts of the city, and we claimed our prepaid seats.

Being experts now on long cramped bus rides, we were unfazed by the crowd of people squished in the aisle. We had real seats with great leg room, and there was even padding on the partition in front of us to protect our knees! Meanwhile, our guide, Surindra, apologized and reassured us it would soon improve. It was hard to convince him that this felt luxurious. Soon after, his promise was realized when we stopped to allow the standing passengers to climb on top of the roof! 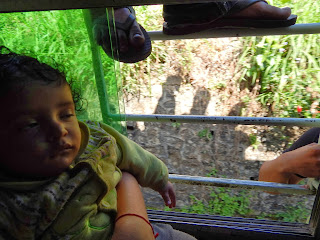 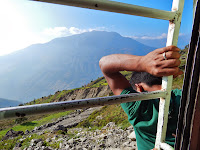 Hours later, after a lunch stop and our first taste of the traditional Nepali food, Dal Bhat, the numbers of passengers increased and the aisles filled again as there was no space left on the roof. For the last third of the trip, Craig was pushed up against by usually six people at a time, with one woman perched on his arm rest. And Erin? Well, she had inherited a baby! 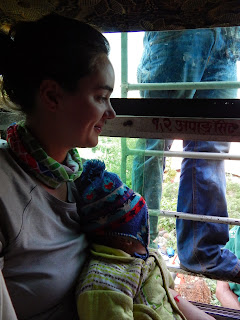 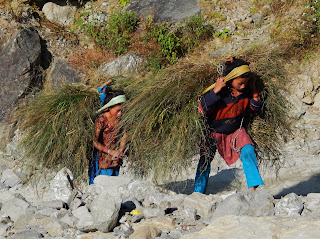 At long last, nine hours later, we pulled into the tiny Himalayan village of Dhunche that would be our starting point the next morning. We spread out our sleeping bags on hard beds, checked out the shared squat toilets, and placed our dinner order. Craig was treated to a number of aperitifs (rum shots mixed with hot water), and we settled into the best sleep we'd had in a week (no horns honking, children carolling, or people hitting the big gong close to our Kathmandu hotel). 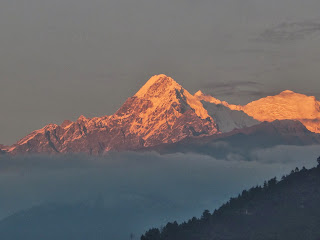