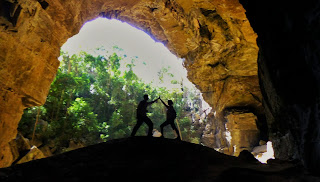 Having done a longer hike the day before we were excited that today's would be a short easy jaunt to a cave we knew nothing about besides that it was the 'Bat Cave'. Our expectations were quickly shattered when the 7 AM sun was proving to be far hotter than expected and a few more hills and valleys were encountered.


Crossing over a small patch of Tsingy we arrived at concrete steps, Seth told us three times (per language) that there were 163 of them. Seth informed us that we were to avoid doing anything taboo while in the caves, luckily there were only two things to avoid doing: wearing a hat, and menstruating. 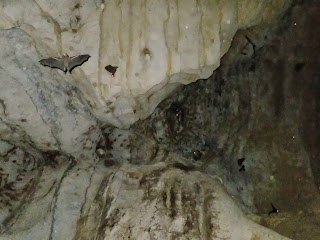 After an awkward silence we continued down; the steps hugged the edge of the rock wall, as we descended we could see a huge cave entrance opening up before us. Once we reached the bottom, Craig removed his hat and we started up into the first chamber. Thankfully there were only a few points where the ceiling was low or the passage narrow. Inside swarms of bats flew around, whizzing past our faces, Erin spotted a rat and we were shown things that look like other things as is very common in Madagascar we have learned. On the way our we saw a the bones of a local grave as the people who live around the Tsingy used to (maybe still do?) bury their dead in the caves. 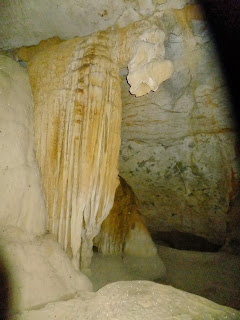 The second cave require much less work as it was a large slit in the rock face leading under the Tsingy. After the cave it was back to the bungalow to pack our bags and make our way to Diego, but not before stopping to admire another new lemur. 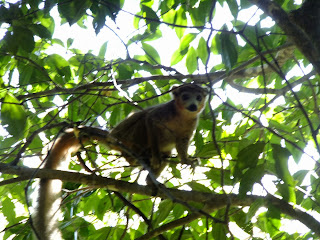 It didn't take long sitting out in the heat of the day to flag down a passing Taxi-Brousse (the later word is pronounce like Bruce, hence Craig calls them 'Bruces'), already packed with people, they were still able to find room for us of course though. In Canada the van that we were in would legally seat 12, however they had added a bench in the trunk, and a bench behind the driver, making 18 (very small) seats. With the addition of us there were 26 people, plus bags, needless to say that it was not the most comfortable journey.

It was however a pretty decent road so we were able to do the 102 km to Diego Suarez in just under four hours. From there it was a 45 minute taxi ride to the sleepy fishing village of Ramena situated on the world's second largest bay (Rio is the biggest). Ending the day on a high note with sunset drinks on the beach.