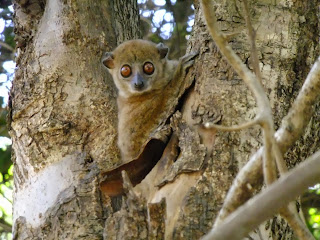 We'd left leeches behind us for a dry, dusty trail. Our guidebook said to be aware of scorpions, but we seemed to be the only ones worried of such things. Most others on the trail had shorts on, sometimes sandals, and one girl we passed was even wearing flip flops! It was only once our guide had difficulty finding one purposefully to show us (he never did) that Erin finally felt at ease (though she left her pants tucked into her socks for the whole hike just in case!).

L'Ankarana is famous for its rock forest, locally called Tsingy, pronounced like the rapper Chingy. They were formed by acid rain according to our guide, Seth.

Seth was friendly, though maybe too chatty for our taste, and often difficult to understand. He boasted about being able to speak English, but it was much better to rely on our somewhat limited French. He would give us 'exercises' where we had to find things that he spotted, which we liked. It's definitely part of the fun to discover a chameleon for yourself! We were less thrilled when he would stop and explain a parking lot to us, which happened. 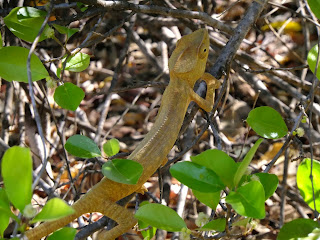 We started strong and saw a nocturnal Eupilemur (?). It was rather cute as it lazily opened its huge eyes to see what all the noise was. We added to our list the ___ chameleon. We passed by 'The Lost River' where three rivers (they were dry, only rivers in rainy season) meet at a large hole in the ground, the cave empties out into the Mozambique Channel 70 km away. 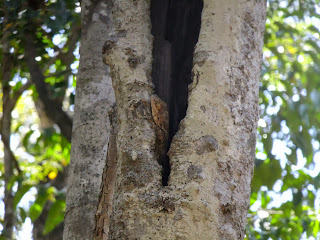 The hike contiuned on, easier than Marjojey because of the dryness and relatively flat trail, but it grew increasingly difficult throughout the day due to the blazing desert heat. We continued on to see the vazaha tree. Its named after the Malagasy word for white people, vazahah. Can you guess why? Notice the bark peels just like the skin of white people when they get burnt in beautiful Madagascar. Charming. 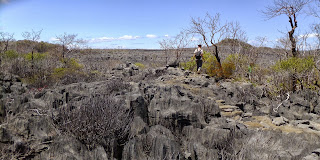 At long last, we came to a viewpoint which looked out over the Tsingy. Tsingy meaning point, a well deserved name given the vast field of jagged rock peaks in front of us.
The next goal was to cross them. Thankfully there was a well-worn trail for most of it where you could see past footsteps had worn down their tops, but our guide still cautioned us, "To fall means to be injured." Not only that, but next to the trail grew scraggly shrubs with thorns and spikey green plants! 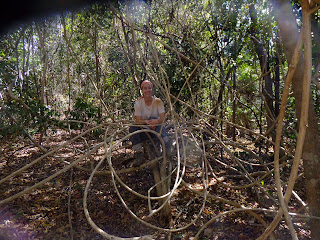 We crossed two suspension bridges (one at a time) and took in the vastness of this unusual land. Our photos just don't do justice to the true depth of the valleys between them, or the sharpeness of each point. Seth demonstrated the former by tossing a rock down a chasm. It clicked and clacked for what felt like minutes as it fell the full 70 meters to the hidden bottom of the Tsingy.

We wound our way back via a different path and discovered further interesting landforms. We stopped to look at a new bird species, then laughed when we realized a few minutes later that there was a lemur right above it! 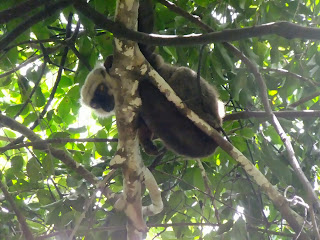 The sun blazed overhead, so we were thankful when we finally turned towards our bungalow. We didn't mind one bit that we didn't have hot water!