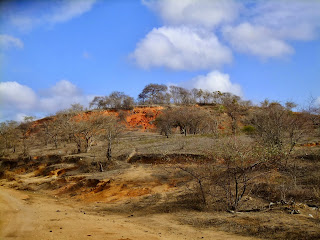 We successfully manoeuvred our second taxi-brousse ride the next day to take us from Sambava to Vohemar. We were fortunate enough to get the front seats again (a girl who had been sitting there got kicked out), and no one else was offered the straddle seat. Many, many people joined in the back and we felt badly for how squished they were, but we tried to 'look big' each time we stopped so that we wouldn't have a seatmate.

In Vohemar we found a lovely little hotel right on the beach. We were surprised and sceptical when they told us their hotel was full and all they had left was one room, the most expensive of the lot, without an ocean view. But we took it under the condition we could switch the next day. 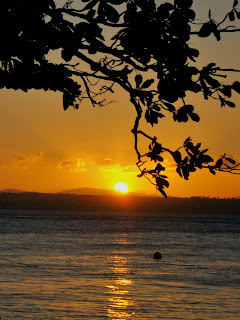 We enjoyed a relaxing afternoon Skyping and adding blog posts overlooking the Indian Ocean. That night we were subjected to a party worthy of Uganda, with the noise only subsiding at 3 am. In the morning, we discovered we had a second set of shutters we could have put over the doors to help block out the noise, so we weren't affected by the all-night party that took place.

The day in between was like the afternoon before. Erin got a glimpse of one of Madagascar's exhumation ceremonies where a group of people paraded a coffin draped in a white gauze sheet up the beach in loud celebration. This is an important part of their religion and these ceremonies are common in the months of September to November as they honour their ancestors. 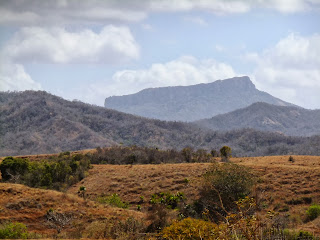 To reach our next destination, Ankarana National Park, (200 km away), we had two options: suffer through a taxi-brousse ride that could take between 7 and 17 HOURS or hire our own 4x4 to take us. We opted for Plan B! The road surpassed that of the Masai Mara for the size and number of bumps, holes, and nearly impassable sections. At least it was money well spent!

We left the beach behind and gradually the lushness disappeared. It seemed like we went over a hill and suddenly found ourselves in the desert. Red dust filled the car and our view was filled with cacti and weird rock formations. We passed only 46 vehicles, 7 of which were broken down and being repaired on (there were more that had been abandoned with missing axles along the side of the road).

Craig counted down the percentage of the road we had remaining as we held on for dear life, even with our seatbelts on! But every time we passed a Bruce going the other way, we felt relieved for the space we had and the speed at which we were going.


For us, we were told it could take up to 11 hours if the road was bad, but we pulled into the nearby town just 6 hours after leaving. Our driver stopped for lunch (he asked us if we wanted to eat, we asked how much further it was to our destination, and he responded with 'I'm eating here then we go'). By 2 we had arrived at the park gates and our accomodation which were side-by-side. Over the next hour, we battled a debate over how much we were to pay (for some reason he wanted us to pay for four times the amount of fuel we used?) but with some mediation and many phone calls back to the office, our driver finally nodded, shook our hands and left. We're hoping we won't have trouble leaving the country with our 'unpaid debt.'

We splurged on a bungalow with a private bath ($16) and enjoyed another round of Zebu brochettes. The evening was only tainted by our first cockroach experience, but we realize that we're pretty lucky to have been travelling for two months without having had one yet!