It was an early start to go Chimpanzee tracking, at 4:55, five minutes before our scheduled departure, our driver was already waving us up to his 4x4 (which we were told repeatedly by expats, locals, guide books, and guides is completely necessary to reach the part of the forest with chimps). As the sun started to rise (in Rwanda the time zone is behind the rest of East Africa so the sun rises and sets quite early), the drive became quite beautiful looking out over the hills through the mist/smoke and the endlessly sprawling tea plantations along the edge of the forest. By the time we had arrived we had passed over roads that only the hardiest of 1976 Ford Fiestas, or maybe a Model T with a flat tire could have possibly traversed. 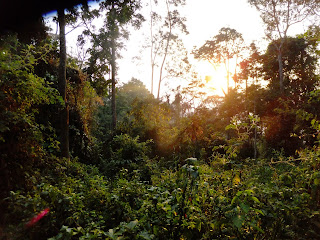 We had been told that the best time to see chimpanzees is early in the morning, so we weren't upset by our early start. We quickly realized that it had the added benefit of more comfortable hiking weather. Chimpanzees spread out and cover a lot of ground throughout the day, especially during the dry season (now) because a single tree doesn't have a lot of fruit. With that in mind, we came prepared for a full day of hiking through rough terrain.

It seemed altogether more non-chalant than tracking gorillas. We tried showing them our permits and they shrugged and said they didn't need them (much different from the scolding we got for only having one COPY of our gorilla permits in Bwindi - so much so that it seemed momentarily that we wouldn't get to go!). Unlike gorillas, renting gloves, sticks or hiring a porter seemed like an unenthusiastic after-thought rather than a necessity, and our orientation lasted two minutes rather than thirty.

Our guide was friendly and reinforced our knowledge of chimp tracking. He laughed when he told us that chimpanzees move quickly, so we have to be faster! With that, we hit the trail. We had driven up quite far, so our initial walk was a gradual descent. The forest was drier, the trail more existent, and we weren't inhibited by thorny vines every two steps. But it still felt adventurous as we dodged through and ducked under the brush. 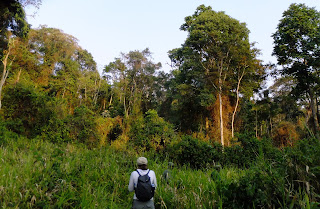 We had been hiking for about twenty minutes when our guide's radio starting crackling. As he converesed with our trackers, we grew worried as it sounded like the other end was under attack! They must speak quite passionately in Kinyarwanda because our guide didn't seem all too concerned. He smiled after the conversation and told us we were lucky: the chimpanzees had decided to come our way!


So we waited a few minutes, then began walking again, this time off-trail and through denser forest. We soon met up with the trackers and they led us around some large trees motioning 'quiet quiet' and 'slowly slowly' with their hands (at least, that's what we think they were saying - they also might have been telling us to 'get down' and showing us some groovy dance moves).

We could see one guide looking in one direction as he twisted around the plants. He found a clearing and they were there - a family of five up in a tree. 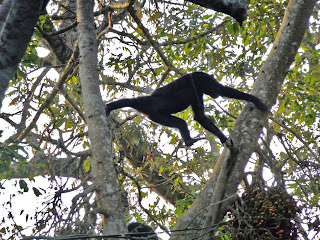 Chimpanzees are much shier than gorillas (or more easily disturbed). Like gorillas there are habituated and non-habituated groups, but even the ones used to seeing people often run away, climb high in the trees, and turn their backs on people. 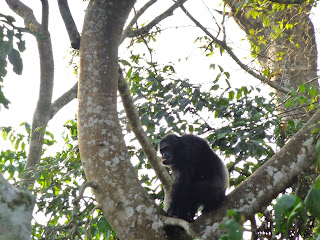 From our little clearing, we were able to watch them swing on branches and eat fruit. The coolest part was watching them walk on the thin branches mainly on two feet. They used their hands to steady themselves, but they looked so much like humans! They turned away from us a lot and moved quickly, so it was hard to get a good picture.

You could hear other families of chimpanzees from the same group calling to each other with the famous "pant-hoot" call. The ones we could see would get excited and start shrieking back and forth and jumping up and down on the branches.

At times we could see rustling in the bushes beneath the tree, but it was too dense to see whatever action was taking place. 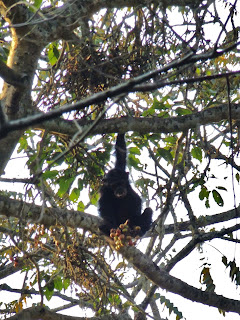 That family moved on after about a half-hour and we followed, pleased that we had seen so much already (and that our guide said we could continue tracking). We soon found another two chimpanzees in a tree, but they were hard to see. It was interesting watching them climb to the fruit (figs), stuff their mouths full of as many as they could, then climb back up to the top. At the top of the tree they would chew and swallow what they had taken in that load.

A special treat came when we were all watching these two chimps and the guide suddenly whispered "Behind! Behind!" We turned to look and a huge chimpanzee was walking on the forest floor right by us, barely making a sound! It happened so fast that we couldn't take a (good) picture, but it will be a great memory for us. 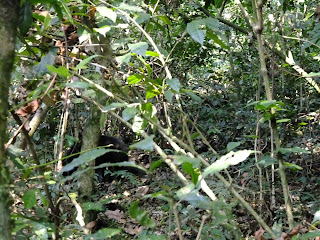 By 9:45 we were back at our guesthouse, feeling elated from another ape encounter. The rest of the day was spent at the deserted, and oddly named, Top View Hill Hotel. Although it didn't compare to the Forest Lodge for atmosphere it was still a lovely place to have a drink and admire the views both to the forest and down to the southern end of Lake Kivu.

Now we will likely have to wait until Borneo at Christmas to see our next ape!
Posted by Craig & Erin at 6:49 AM