We spent most of our first couple of days at the hotel next door, Kilima Kidogo, where their restaurant looked out over the sea and they had cushy lounge chairs on the beach. It was where we posted our previous entry in the shelter of the inner restaurant due to the extreme wind that day.  A few minutes after posting, our eyes were drawn up to the cavernous ceiling as flames had engulfed the side wall and were crawling across the thatched roof quickly. Without thinking we had snatched up our computers and camera (and Craig grabbed the unpaid bill for some reason which we returned to pay) and ran outside. The flames climbed high from the roof, moving quickly across fanned by the high winds. Inside the guests of the hotel were running out while the staff ran back and forth grabbing peoples bags and the furniture. Meanwhile we could see parts of the flaming roof falling around them, we yelled at everyone to just leave everything and get out. The fire by this point had consumed the entire roof, the flames climbing high and licking the nearby trees, the surrounding area being mostly dry shrub and coniferous trees, our accommodation being next door, and if the winds changed direction, our bungalow could be burnt down in minutes. We ran back along the beach to pack our bag and took them down to the beach. In the end everyone was safe, the hotel was destroyed, but the surrounding area was fine (the hotel on the other side had some light singeing we are told) and our place was untouched. We watched over the bags of some women who lost almost everything in the fire while they returned to see if the contents of their safe had survived. 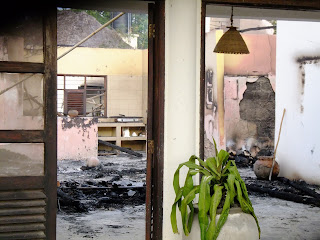 They returned a while later holding what appeared to be lumps of coal but were in fact the remains of their passports and cameras. Completely ruined. The surrounding hotel owners were quick to volunteer rooms for the displaced guests. In discussions with the staff we had come to know a little over the previous few days we learned that all the staff was helping to clean up the day following the fire, the owner ("Big Mama") had insurance, but that they would all be out of work until next July at the earliest. The guests that had lost everything cared most about the tragedy of the staff losing their jobs, but the staff seemed to worry only of the guests having lost everything (we understand they were able to quickly get new documents). Possibly because of this great display of empathy this scary, sad, and disastrous event has not spoiled our time in Zanzibar.