We woke up early and headed out to find a bank and supermarket, along with a better breakfast than the one we knew we'd be offered at Luther. The receptionist assured us that someone would get ferry tickets for us, so we'd have more time before leaving. We needed to be at the dock at 9, so when we arrived back at the hotel at 8:30, we felt we were in good time. This dissolved when Craig realized our tickets had been bought for the wrong day. In the haste to grab our bags and get to the dock, we didn't realize that we still had the room key. We're still hoping now that we won't be charged for a week in God's hotel!

Although frazzled, we managed to get tickets and switch over our stuff in line to non-plastic bags when we were told we couldn't take them. We found sunny seats on deck, and left right on time. The two-hour ride flew by and with each white sand island we passed, our anticipation grew for our upcoming week.

We've now learned they are semi-autonomous, with their own president and both main political parties claiming that Zanzibar is a fully independent state, along with their own national soccer team (however FIFA rejected them, probably on the basis of not paying enough kickbacks). Zanzibar was independent for 1963, before merging with Tanganyika to form Tanzania. So we're not entirely sure where we are right now, especially after learning that we are not on Zanzibar, because Zanzibar is not an island, we are on the main island Unguja, which is a part of the Zanzibar Archipelago.

Upon arrival, we went through immigration (were we entering or exiting Tanzania?), and got our passports stamped with Zanzibar's name. We bargained with our taxi driver and received the $40 price the hotel had prepared us to agree to (down from his $60), and were on our way. He was lovely in his attempts to show us around Stone Town, his pride making up for his lack of English skills. On our way to the East Coast, we caught a glimpse of the endangered Zanzibar Red Colobus Monkey. 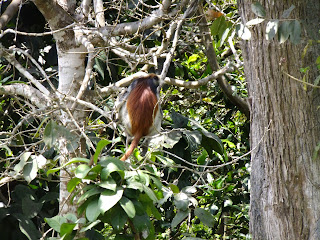 Pulling up to our place, we were met by the image of total relaxation. Beautiful bungalows sat up the small hillside overlooking a stretch of sea that had more shades of blue than we had words for. The tide was out, so our pristine white sand beach was in fact a ways from the water, in the area between were large numbers of tidal pools with local women moving between them collecting starfish, and shellfish. There were no other Mzungus in sight.

Our bedroom was exquisite - roomy and airy with a billowy mosquito net (the fanciest we'd seen with entranceways on both sides) above a king size bed, and an attached open-air bath. Erin had been so pleased to find goodies for Craig's half-birthday at the supermarket when he wasn't looking, and she right away thought of how she'd hide them around the room. That was until the owner mentioned how we shouldn't leave food in the room because we'd attract, best case scenario, just ants, and possibly RATS. Plus, she didn't really have a place we could store food, she just advised us to eat it all. 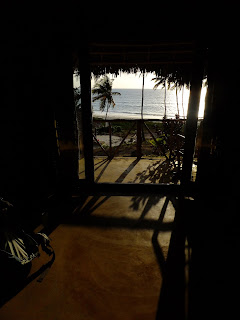 We have been carrying some food for six weeks now, just in case we can't find options for Erin, or for when we're in remote locations camping. We have six dehydrated meals that we now think will be handy in Madagascar, along with a few granola bars that are being coveted til hard times. Plus a lactose-free chocolate bar that has come all the way from Calgary, still unopened. So we managed to get her to confide that there is often space left in the fridge for guests to leave a thing or two, so if no one else was using it, we might be able to store some things there. We promptly emptied out all of our backpacks, being sure to leave no sock unturned in search of food items and hauled it all down to their mini-fridge. (In the end, Craig left a bag of biscuits in his bag that was found two days later, but we seemed to still be rat-free). We also packed up lotions and medicine into the plastic bags we'd smuggled into the country, and hung them from the hook on the door. NOW, we were ready to relax!