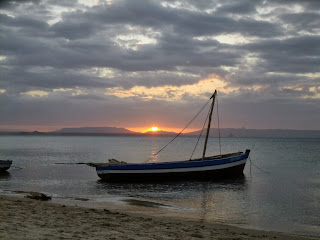 We awoke the next morning in paradise. Ramena boasted many day trips and activities so we tried to decide how to best spend our time. In the end, we thought the first day would be best spent exploring so we'd know what there was that we liked close by. There were supposed to be three bays connected by paths along the shore - a 15 km walk one way. We thought we'd just see what the first bay was like, as we'd read it was the best for swimming. We declined the offers for a guide or a taxi and set out on our own to discover.

We knew which way down the beach we were supposed to go. We walked past the restaurants, then the rundown houses and fishing boats, and around some tall rocks. Here we paid entrance to the 'military' section of the beach that had some old ruins, which we ignored. We continued on to a lighthouse but here reached a dead-end as waves crashed against jagged rocks. So we doubled-back, figuring we needed to follow the road.

After walking directly away from the ocean on the windy road for a while, we saw a well-worn path off to the left that headed up the hill. Guessing this was the way, we strode onwards. It didn't take long before we were tired from the incline and the heat. We were now far from the beach, without any ocean views, and it didn't seem promising we would get any soon. So we decided to throw in the towel and return to the perfectly fine beach we'd already passed by.

We did not make it to the elusive Trois Baies, but we did spend an hour lazying in the sand and ocean on a secluded beach. Not too tough of a day in the end!