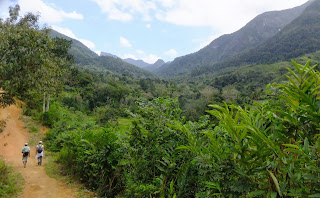 We'd been advised to get to the park around 7am since we hadn't booked ahead. The best we could do was wake up at 5:30 am, which got us to town by 6. As like most East African countries (and many places in the world), buses don't leave at a certain time; they leave once they're full. In Madagascar, their form of public transit is called a taxi-brousse (a bush taxi). Craig likes to write them as taxi-Bruces so you might see that in some of our upcoming entries. These vary in terms of the type of vehicle. For us in Sambava, they were elongated mini-vans.

It's a tough choice - do you get in one that's empty so you can sit at the front with the driver and have more space, or do you get in one that's squished-full knowing that it will leave sooner? We were dropped off by one that was near-empty so we got the good seats up front, but spent the next hour driving up and down the same stretch of road with people getting on, sometimes getting off to hop on another that was fuller, etc. We stopped to put bags on and boxes to transport. The van seemed to be full of seat-fillers to help encourage others to get in. Our driver changed three times...you get the picture. Just after 7 am, we were finally on our way.

The ride was pretty smooth, well-marked, and roomy until a fourth person was added to the front bench seat. We were happy at that point to see we were only 17 km away from our destination (which turned out to be only 7 km because our Lonely Planet was wrong again!). Thankfully our driver knew where we were going, so he stopped and let us off at the park office. 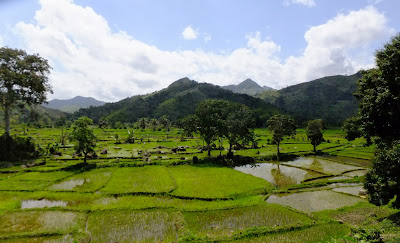 After sorting ourselves out with a guide, a special guide, and two porters, we were off on our way. (It turned out we were the ONLY people in the park that day). The first hour or more of the hike took us along a thin dirt road through the communities that our park fees helped support with schools, etc. It was apparent that in the rainy season it must rain a lot since all the homes were built up on short stilts, many homes had walls made out of woven bamboo like we'd seen in Sambava. The people were friendly and the children happily and shyly would come up to us with a "Bonjour Monsieur! Bonjour Madame!" We were rewarded with views across rice paddies to the mountainous jungle ahead of us.

We were very excited to see our first chameleon (famous for inspiring the name of Chamillionaire) as well as other large colourful reptiles. As we approached the forest we passed many local people working the surrounding areas, many were cutting down small trees (and then carrying back the rather large logs to make charcoal), others fished with small nets in the shallow streams. With each step the forest grew around us and we could feel that we were very near the park boundary.

As the forest grew in around us, so too did the sounds of the jungle take us in, birds sounded from every direction, along the path there'd be a rustle of leaves from a retreating lizard, or the surprising loud chorus of marching feet as a foot-long millipede crawled along next to us. At the park entrance we found a pleasant gazeboo to rest and have our first meal of the day (a few handfuls of nuts), before continuing on in the heat. The jungle was thick now and each curvy, spiralling vine tendril acted as a hook that caught our gaze, pulling it up into the never-ending labyrinth of branches and leaves in search of our first lemur.

Strange white fluffy insects, plants found nowhere else on earth, orchids, and giant pill bugs (larger than a golf ball when rolled up) were all found along the path. It was amazing to hike
in a place where 70% of the things we saw we'd never seen before. Cries of, "What the heck do you think that is?" and "That MUST be the cure for cancer!" could be heard. Unused to the heat and humidity, we tended to lag behind our guide a little bit, so it was normal for us to round a bend to see him waiting for us looking off into the forest. Each time we hoped he had found something amazing. For the first hour each time he turned, saw us and continued on his way. Then he said the word we had been waiting for, lemur. He could only see the branches moving some 30m away but he knew from the call that it was a Bamboo Lemur. "Do you want to try to see?" he asked. A moment later we were trudging through dense underbrush in the general direct of the branches that had been moving. We reached a precipous and from here we would have to scan the trees. Craig spotted one not too far away looking at us, but shortly after everyone had seen it, the lemur had vanished into a bamboo thicket.


Our elation upon having seen a lemur for the first time soon vanished when Erin made another discovery. A leech had attached itself to her stomach while we had been going through the bush. She was able to quickly remove it, however another travel badge was added to her shirt in the form of blood stains. Now slightly less relaxed and in the moment, and more often checking our pants and shoes (Erin found another on her pant leg) we continued on. We had been expecting a slightly easy hike solely based on the low elevation at which we were to be staying on the first night, but the rolling hills, heat, humidity, and shear length of the hike (almost 15km at this point) was enough to have us ready to curl up in bed for the night at 2:30pm when we finally arrived at Camp 1. 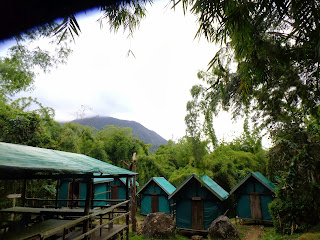 For lunch/dinner we made rice with garlic, shallots, carrots, tomato paste, fresh tomato, and corn. Considering it was the first cooking either of us had done in 2 months it turned out pretty well. Our meal was interrupted, though, when Erin spotted a Bamboo Lemur (and then another, and another) in the forest next to us. Over the next hour they slowly came closer and closer to us and allowed us to get many good looks as they ate bamboo leaves.

The lemurs still only 10 metres away our exhaustion had us wishing the sun would go down so it would be okay to hit the hay. At this point our guide told us it was time to go to the nearby waterfall, another 2km return.  Craig was ready to decline when Erin jumped in with "Okay!" (she debates now that it was said with any kind of exclamation point, but regardless, agreement had been made). A bit surprised by the new-found energy we strapped our shoes back on and headed down the slippery slope as the rains moved in. 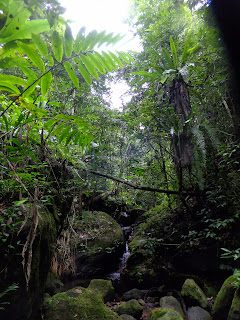 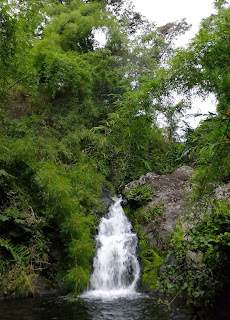 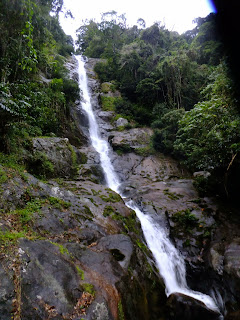 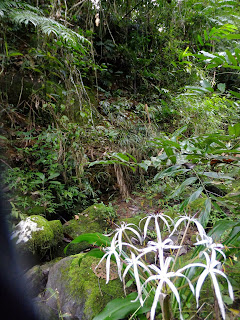 The skies opened up shortly after, hitting us hard if we were exposed but we were relatively dry if in a thicker part of the forest. On the way we got a view and the waterfall was far more impressive than we had thought it would be, however we were only halfway so we marched on. We arrived at the base of the waterfall but it was another few minutes before anyone enjoyed the view. Our pantlegs and shoes were all covered in leeches. The falls and views over the forest below were breath-taking but we were quite distracted by the thought that we didn't get them all. We were glad to turn back, return to camp and have our well-deserved sleep. Before drifting off, Craig selflessly strung up our mosquito net for Erin on her bunk so she'd be protected. 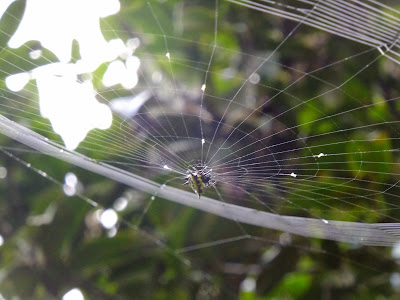