After a delicious breakfast at our hotel, we met up with our previous day's driver at reception. He urged us to leave quickly because our flight time had changed - it was now leaving 45  minutes earlier (this is supposedly common in Madagascar). Thankfully we had no trouble making it through the one-gate airport in enough time, and it was a blessing because it meant we got to Sambava that much earlier.

When we had bought our tickets the day before, the cashier had urged us to buy business class tickets because they were cheaper than economy tickets. How, we're not quite sure, but the price was below what we were expecting, so we agreed. Her logic was that there are different tiers to ticket prices - Malagasy citizens in economy get the cheapest price, then it increases as such. At any rate, we were the only people in business class. We giggled as they pulled the curtain across and brought us food that no one else got. Craig relished being able to sit with his knees together and not have them touch the seat in front. We enjoyed the hour-long plane ride and were afforded views of the countryside. Approaching Sambava, we could see lush hills, mountains, and water. Close to the town was the ocean, turquoise waves crashing up on shore where on the other side of the bank a red-brown river flowed.

We made our way to Hotel Orcheada and were pleased to find they had a room free, though not the cheap bungalow on the ocean. The staff was friendly and the food delicious (we enjoyed our second taste of Zebu, the local cow relative, as much as our first). We were told that we couldn't just show up the next day at the National Park, and when calling the number in our Lonely Planet, we discovered the number was wrong. So it was recommended that we visit a cafe with a tourist office. We're not sure we learned anything new, but the operator was friendly and helpful and confirmed a lot of what we already thought. 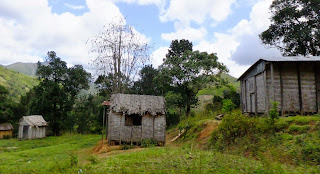 We enjoyed our walk back through town, seeing the bank we'd seen in the air, us on the river side, waves crashing on the other. Local stalls lined the street and we laughed along with the girls and women as we bought groceries for the next three days. We were both excited about the idea of cooking again. The houses here are made primarily of woven strands of dried bamboo. Most that we've seen are all on stilt platforms likely due to the heavy rains.

In the end, we decided to leave some things behind at the hotel so that our bags wouldn't exceed the 15 kg maximum for porters. We were anxious when we realized the power was out and it seemed we wouldn't have a working camera or video camera for the trek, but it came on right before bed so we could sleep soundly!