This entry is not about gorillas or genocide memorials or anything of real significance. But it's a quirky little story that I want to remember because it shows one of the reasons why I'm so lucky that Craig is in love with me.

Before we left, I was concerned that I wouldn't be able to eat much on our 17 hour plane ride to Ethiopia. (I don't know why I hadn't thought to call the airline to request a dairy-free/gluten-free meal, but I thankfully later did.) We were in Shoppers getting some last-minute things and Craig picked up a bag of Crispers for the plane. I looked longingly at all the forbidden snacks that I love so dearly and felt sorry for myself. So I found a bag of popcorn instead - the only size they had - extra large. It was a little excessive and super bulky, but I figured it'd be worth it if it was my only nourishment for a day. In the end, I took lots of snacks of fresh fruit, nuts, gluten-free banana bread, and called the night before about a special meal that ended up being perfectly edible. So that left us in Addis Ababa at a reasonably nice hotel with a restaurant, and an unopened bag of popcorn. It seemed silly to eat it right away when we had food in our lodging, and we knew Ethiopian food was fairly bread-based, so it seemed smarter to hold on to it a little while longer in case we found ourselves in a situation where I couldn't eat anything.  So we brought it along with us.

Since Craig's day pack is much larger than mine, he offered to carry it. Then he ended up caring it in a plastic bag with other odds and ends when his bag was too full. We were finding food easily enough, so we thought we'd save it for our safari because that might be a place where options would be limited. Safari turned out to be the best food we'd eaten in all of Kenya and our cook was amazing at preparing extra rice dishes just for me that were way tastier than everyone else's sandwiches. So we laughed and said 'we'll probably want it when we're camping before gorillas' and so we continued. All this time, Craig was faithfully carrying this huge bag of popcorn, never complaining and always insisting that he would carry the extra bag. I would suggest opening and eating it but Craig would say, 'No, I'm happy we still have it because it means you're finding enough to eat.'

Then one day I ended up with the popcorn bag, when we got separated on the bus, I left it behind accidentally. I got off the bus, saw a guy walking by with a massive garbage bag full of popcorn (because we ironically saw popcorn stands EVERYWHERE in Kenya AND Uganda), and realized I'd left it on the seat above me. At that point, Craig finally said, 'just leave it,' but I figured we'd carried it all this way and it was 'kettle corn,' not regular corn, so it was worth it to get back on the crowded bus, go all the way to the back, and find it.

So, I'm sure you can see where this will take us. Little did we know, our gorilla accommodation would be luxurious with full meals included. So it was on a regular evening, with a fantastic restaurant on hand sitting outside our geodome when I guiltily opened the bag. On Day 28. Twenty-eight. 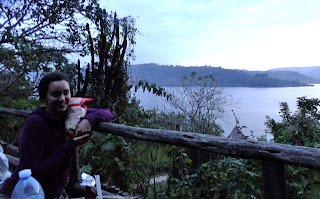 And even then, I felt like it was a terrible waste because we weren't for wanting of good food. So I only had a few handfuls, packed it back up and said, 'We'll want it when we're camping in Rwanda in a couple of days with no services close by!' 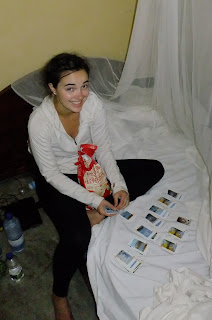 So we continued our dedicated pilgrimage with our faithful friend. And still, Craig's patience never waned. He joked that we'd never actually eat it, but instead take pictures of us with it everywhere like a garden gnome.

As you well know, our plans changed and we found ourselves lounging poolside at a five star hotel instead of camping. No popcorn was needed for chimpanzee tracking. So it was on Day 38 (38!) that I said 'Enough is enough; the bag is open, let's enjoy it!' So we dove in, had a few handfuls and played some cards. We haven't finished it yet, but I expect by the time we leave Kibuye the bag will be done (update: it is not). The popcorn will be gone, but I'll try to hold onto the great memory. A silly example, maybe, but the true heart shows underneath it all. I'm a lucky girl.  And I even let Craig have a few handfuls. :)
Posted by Craig & Erin at 7:02 AM