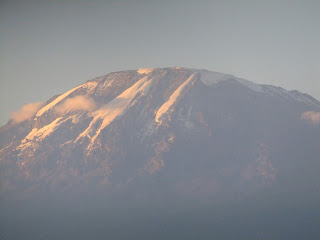 Our flight from Kigali took us over Lake Victoria to the to the Kilimanjaro Airport, offering us a few fleeting views of 'Kili' on our approach as well as some great views of Mount Meru. Stepping off the plane we noticed quickly that Tanzania brought even hotter temperatures and more humidity..

After flying through immigration, we searched for a bus to take us to Moshi. The taxi drivers watched us with amused glances, reiterating that our only way out was with them. It certainly appeared that way, with only a few flights going through Kili Airport each day and the rest of the passengers appeared to already have transport arranged.

So we tried to make the most of the expensive ride by relishing the extra space and seatbelts. We had stolen a few pics of Mount Kilimanjaro from the air, just in case, but we received great views of it and Meru as we drove along. Open fields, cute towns, and cheerful people greeted us.

Our hotel had a tiny door off the main street that led down a dark hallway. It seemed bleak, but opened up to a thatched reception and a garden restaurant. The room, though cramped, boasted a great view of the mountain from the outside hallway/balcony. We were on the top floor with only the rooftop bar above us. Disappointingly, they don't serve up there, but we were able to order dinner in the main floor restaurant and have it delivered up top.

We'd read and heard that most days you can't see the mountain at all, and the evenings is the best chance for it to clear. So we knew we were in luck with our great view. We overheard the next table saying it was the best they'd seen it and they'd been in Moshi for two weeks.

We celebrated with a delicious pork dinner and a bottle of Tanzanian white wine. It proved worthy of celebration when we awoke to thick cloud coverage that lasted nearly the whole day. Our plans to move on to Marangu, and to hike the foothills seemed pointless. We'd gotten the view we wanted and were relieved that we hadn't fallen to peer pressure and planned to hike it. We either would've made it to the top and not been able to see anyting, or wouldn't have been allowed to summit because of the weather. All for $1500 each.

Instead, we organized our transport for the next day and sipped drinks at the Union Cafe (very reminiscent of a Canmore establishment), all the while peeking up to see if the clouds had cleared. In the end, the summit peeked through the clouds for 20 minutes or so.