After a relaxing day of interneting the day before, literally 12 hours straight (while enjoying the views of the lake), we were ready to do a bit more around Kibuye. We choose to spend three days there because of its relaxing location on Lake Kivu, but also because Erin had read the book, 'The Bone Woman'. It's a book written by a forensic anthropologist who worked on exhuming mass graves in Kibuye and Kigali to help prosecute perpetrators of the genocide.

Her first on-site experience was at a church just outside Kibuye's town center. It was a place where Rwandan Tutsis sought refuge but were found and slaughtered. 11,000 people were killed in and around the church in brutal ways. The church continues to hold congregation today, which we happened to witness as we visited on a Sunday.We had asked the hotel receptionist for directions and it didn't sound too far, so we set off on foot up the hillside along the coast. It turned out we made a wrong turn and ended up on the other side of the lake, but after a nice healthy walk we arrived. The service was going strong and sounded beautiful and joyous, a perfect fit for the surroundings but a stark contrast against the atrocities we knew had been committed there.

Not wanting to intrude, we found lunch at the cute hotel down the road, Home of St Jean, then returned after our goat and fish skewers to take it all in. Now vacant, it seemed haunting. A little memorial out front read 'Never Again' but it was hard not to picture the devastation that had occurred. After a difficult few moments of reflection of all the stories we know of from this site, we walked back out on the peninsula. We were glad to bargain for a short water taxi ride to take us the last half of the way. 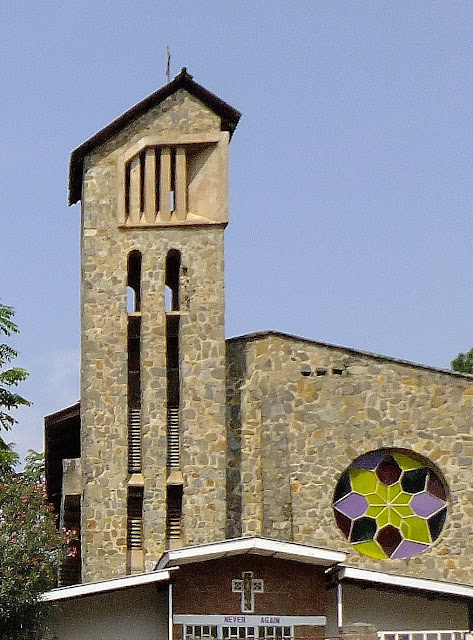