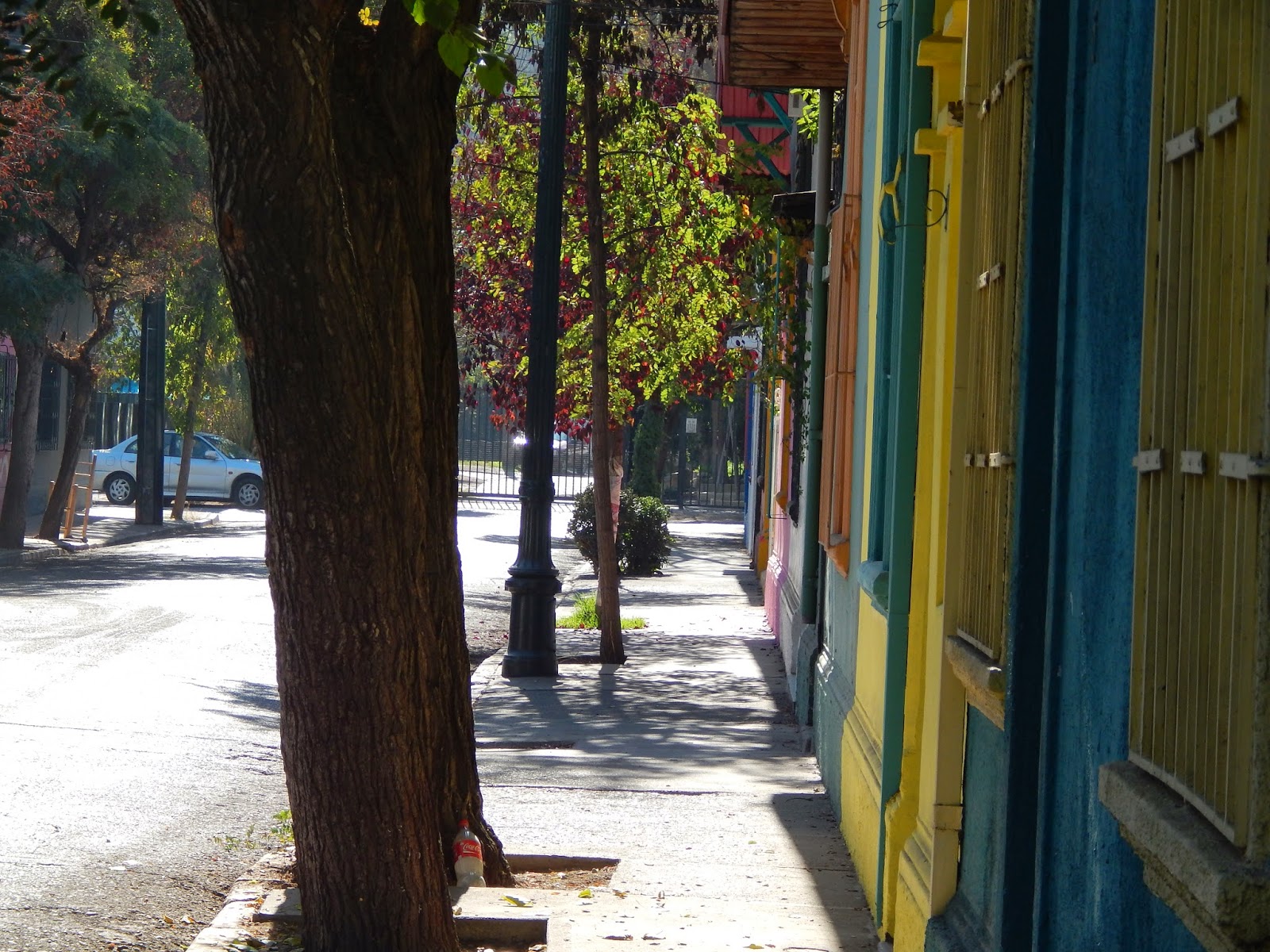 Nearing 300 days of travelling solely as a couple means it's nice to have a day apart. With Kristen and John at our sides, it was easy to both have a day out in the company of others. The guys took off to watch a fútbol game while the girls headed up Cerro San Cristóbal. Here are our respective recounts. 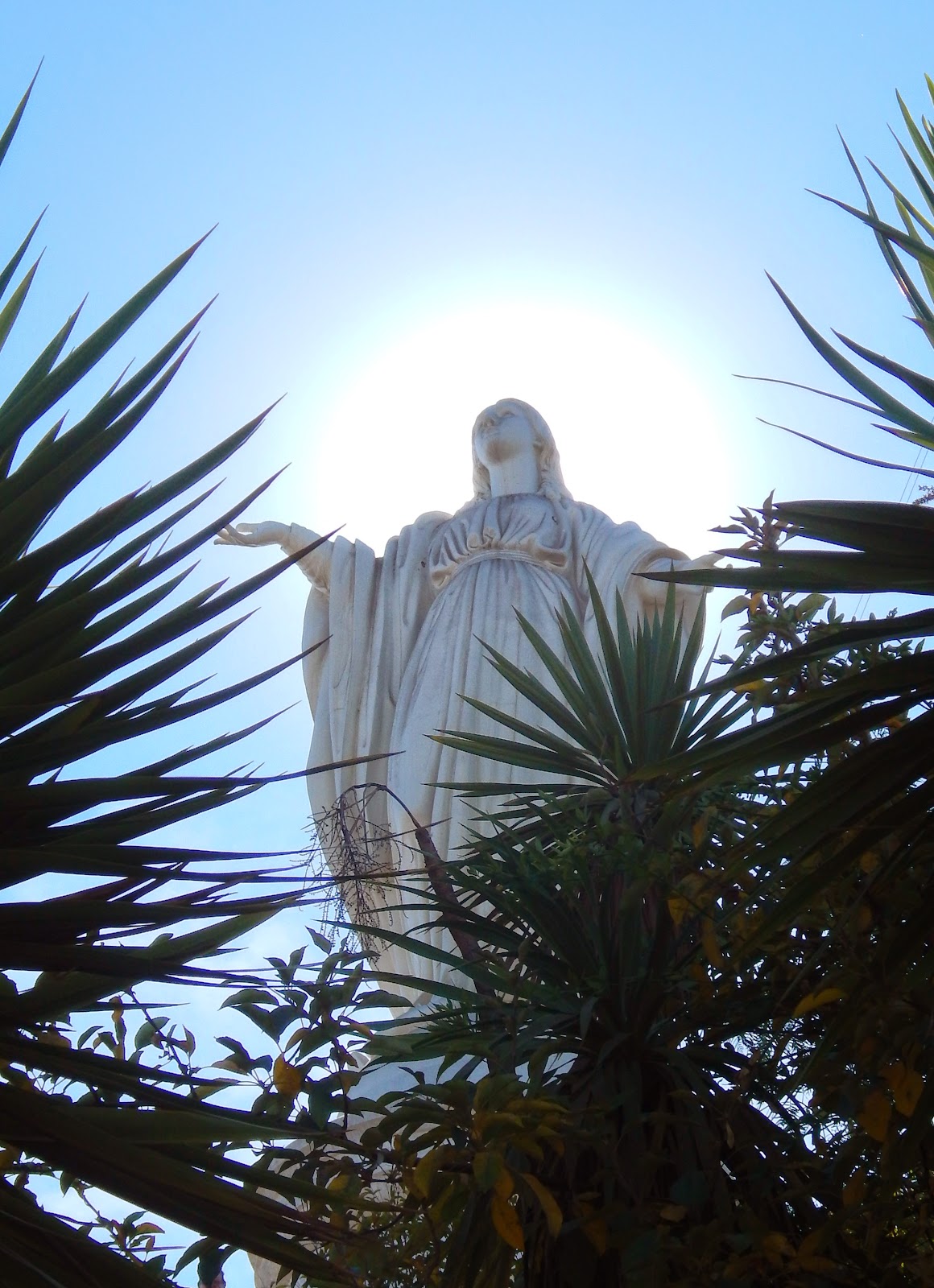 Erin
It was the perfect day to be outside. We were early enough that the air was still crisp but the sun was shining brightly overhead, promising one of the clearest days we'd had. Kristen and I strolled along the many pedestrian streets, pausing to take photographs of street art or beautiful architecture. The neighbourhood below the hill, Bella Vista, had many enticing restaurant patios and balconies opening up for the day. We dreamt of a post-climb pisco sour.

The Cerro itself certainly provided us with a good workout as we wound our way along the road at its base before climbing a series of switchbacks on a walking trail. But it wasn't any kind of quiet time in nature. Families flooded the trail, perhaps more than usual due to it being Easter weekend. We even saw a balloon launch from the top! The Cerro also boasts lush parkland, Japanese gardens, a funicular and a zoo. But, it's main attraction is a 14 m high statue of the Virgin Mary at its peak. 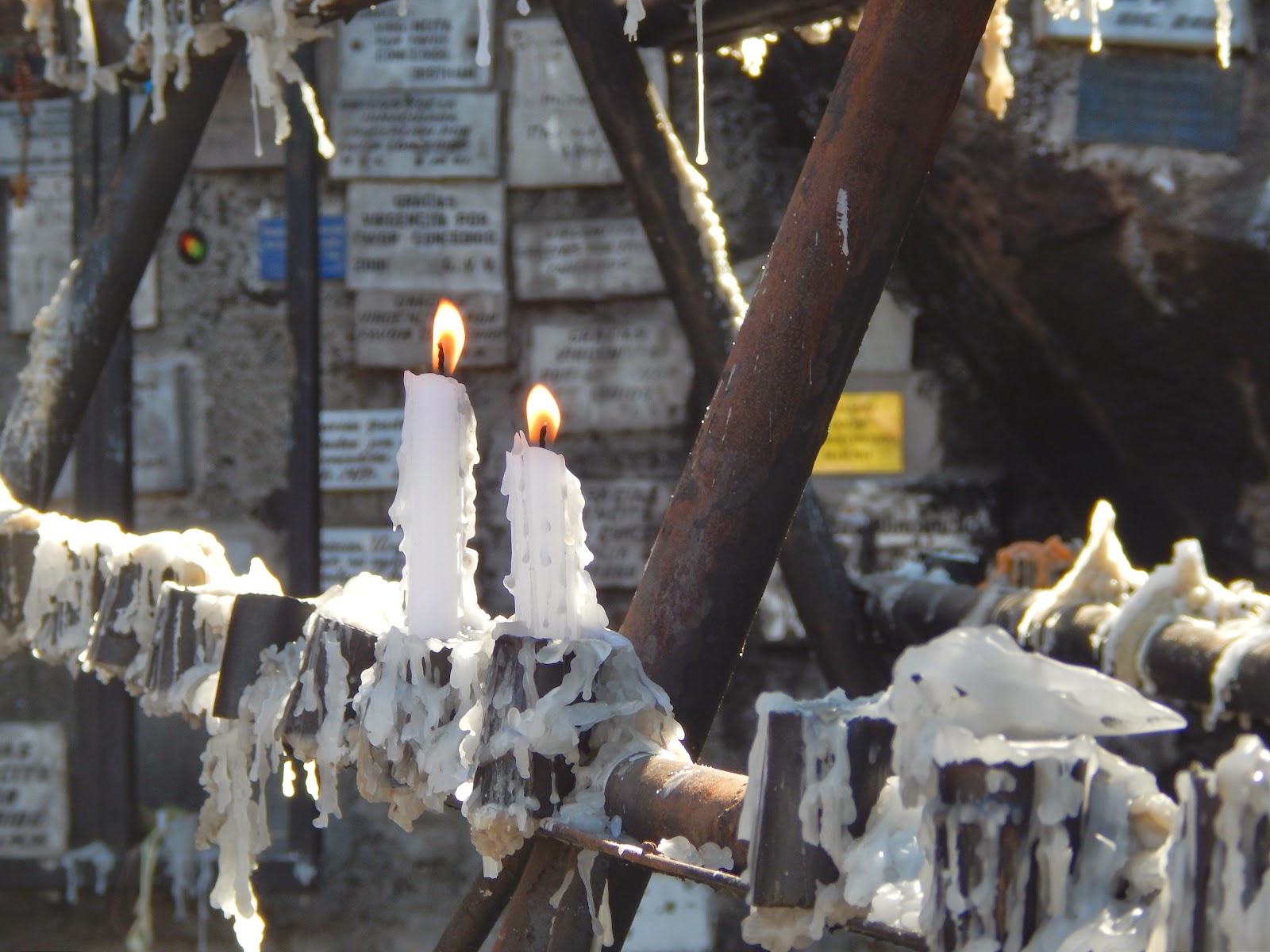 We paused to admire the city views, with the Andes just peeking in behind, and have a snack. Then we jogged back down the trail stopping only once, to give a wide berth to a furry friend that a fellow climber found on the trail. 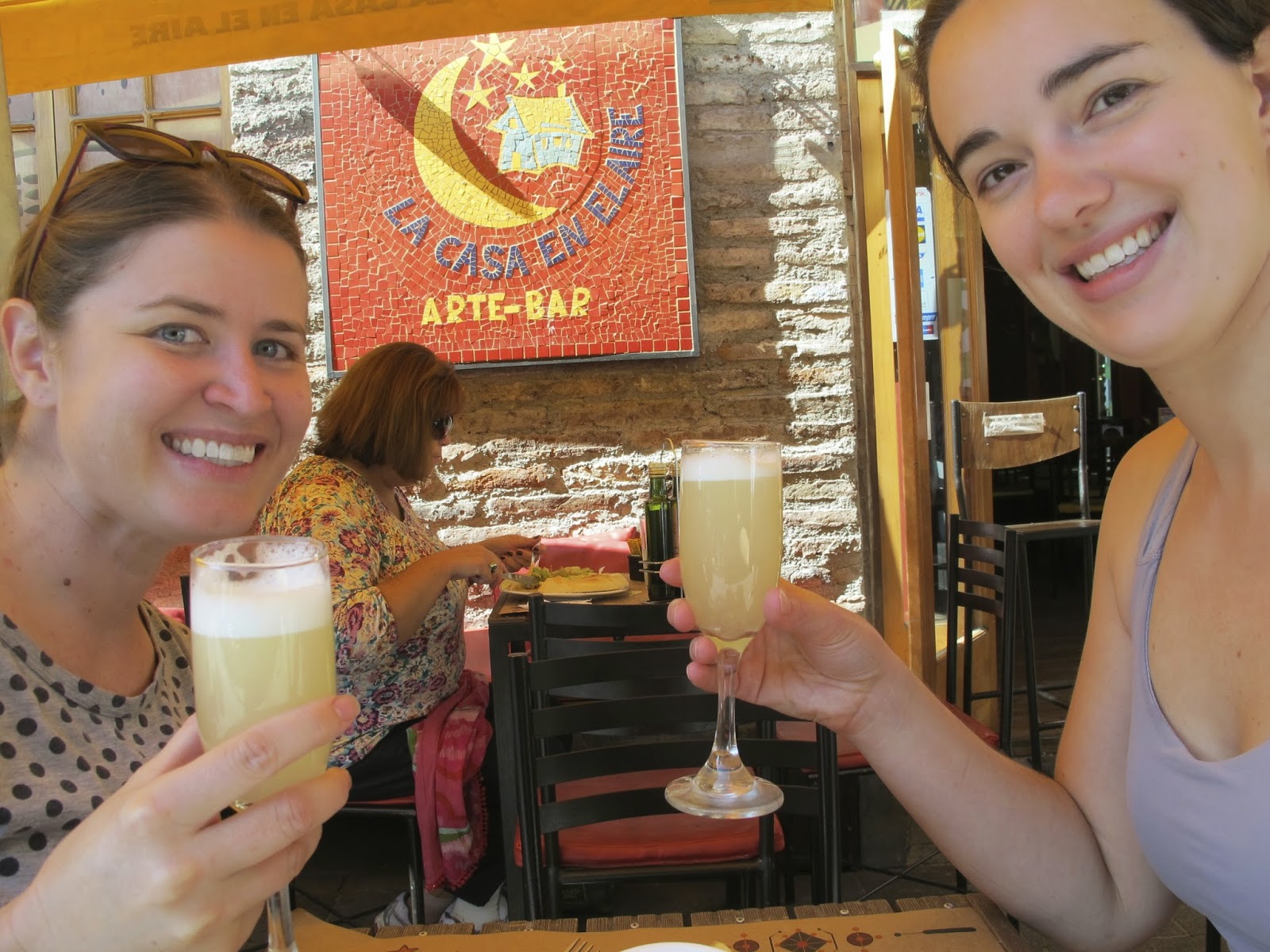 Kristen led us to another pedestrian area filled with patios and little tourist shops where we stopped for picadas (of yucca, carne, corn patties and guacamole) and a real pisco sour (just for you, Diane!). No more pre-made stuff for us! 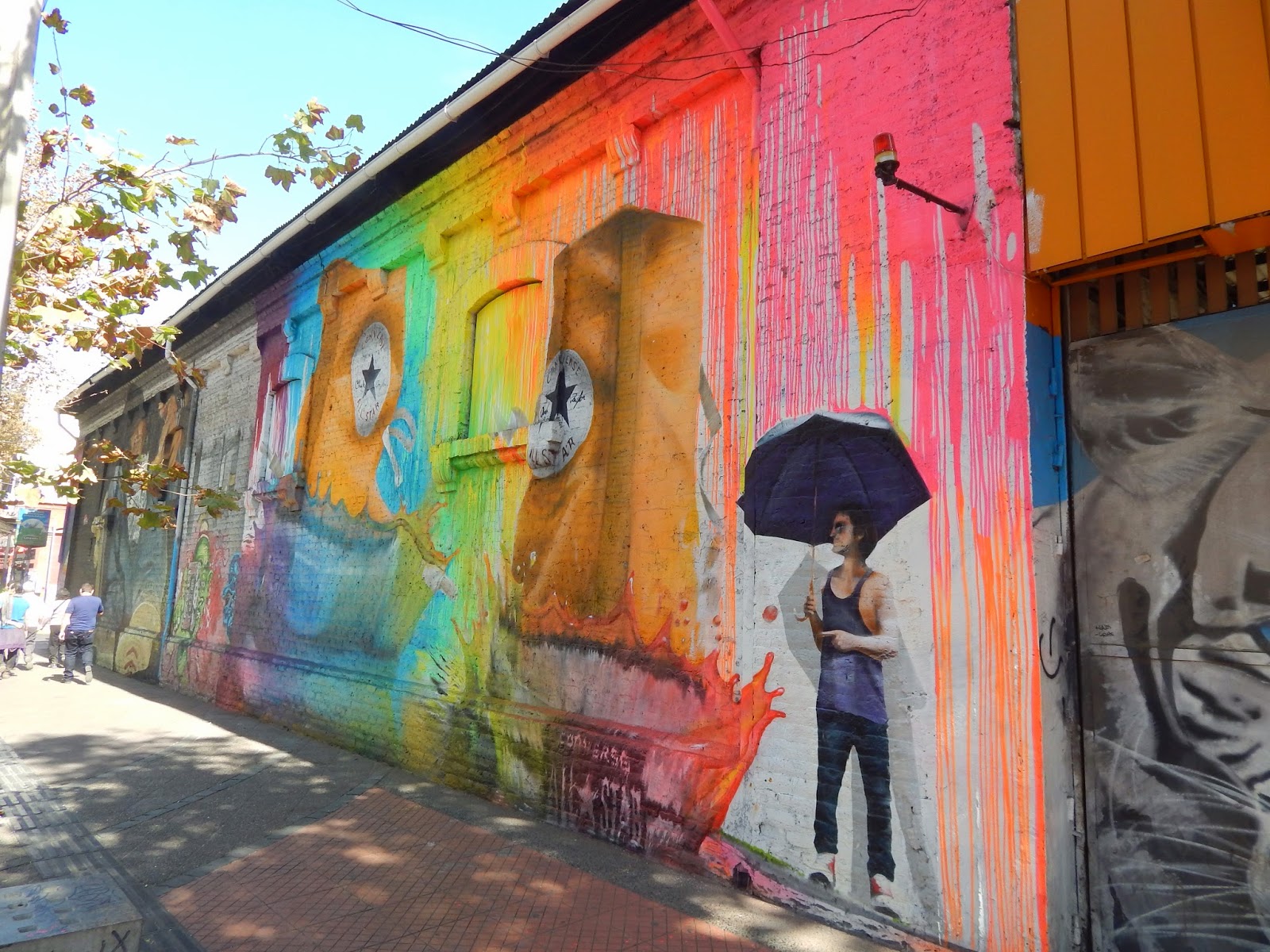 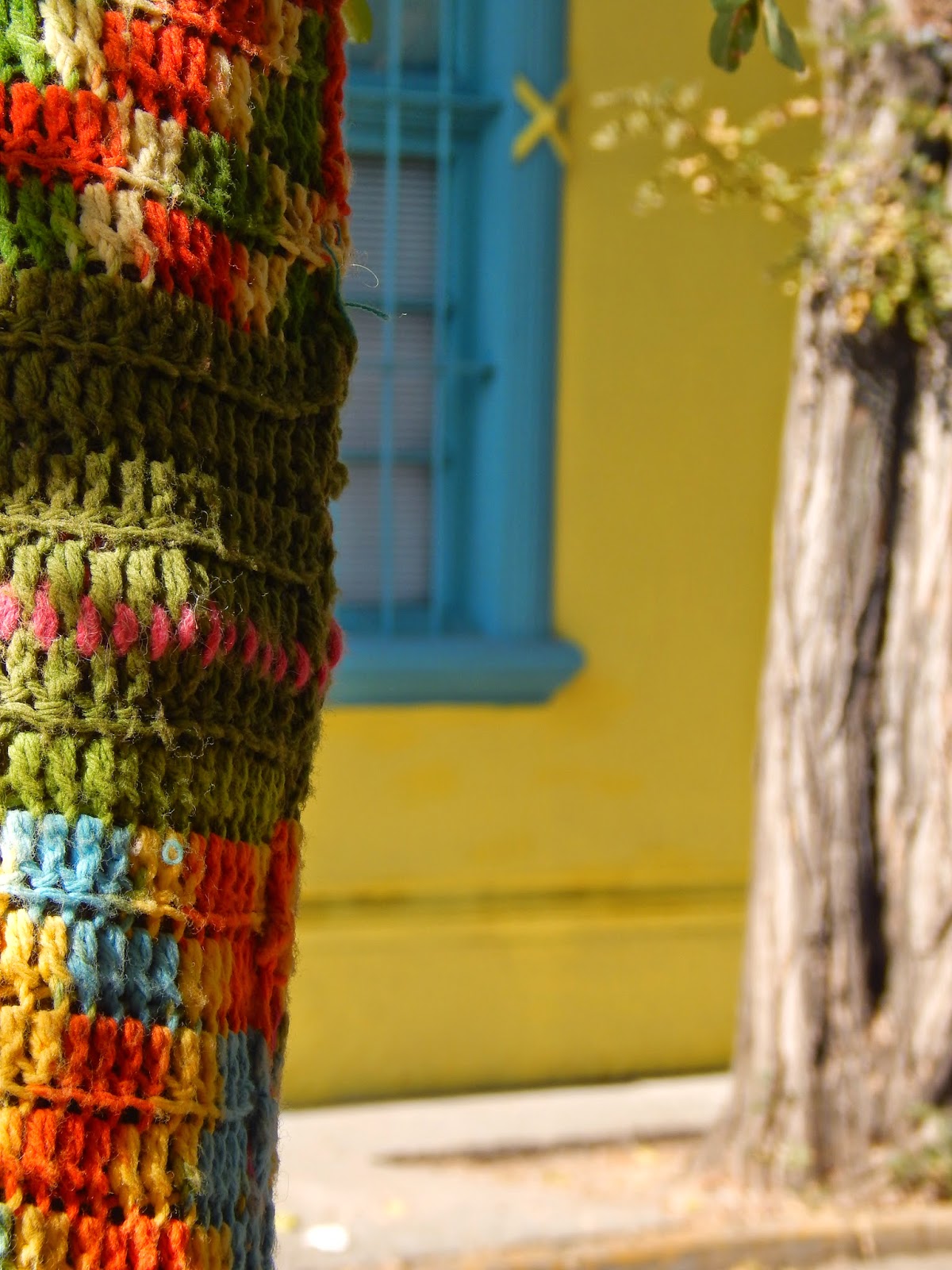 Just like in Barrio Brasil, we let our feet and eyes do the leading. We wandered the artsy streets, leaving maps or plans behind. With the rough idea to start walking home, we crossed the ravine and caught a glimpse of the Plaza a la Aviacion and its dancing fountains. I've tried to find the significance of the statute online with no success.

Having given the guys a curfew of 5 pm, we got giggly when we realized it was nearly 5 and we were still out ourselves. We were pleased to hear their voices as we approached our apartment, meaning they hadn't been murdered at the soccer game, and that it didn't look to them like we'd been sitting around waiting for them to come home. What a great girly day! 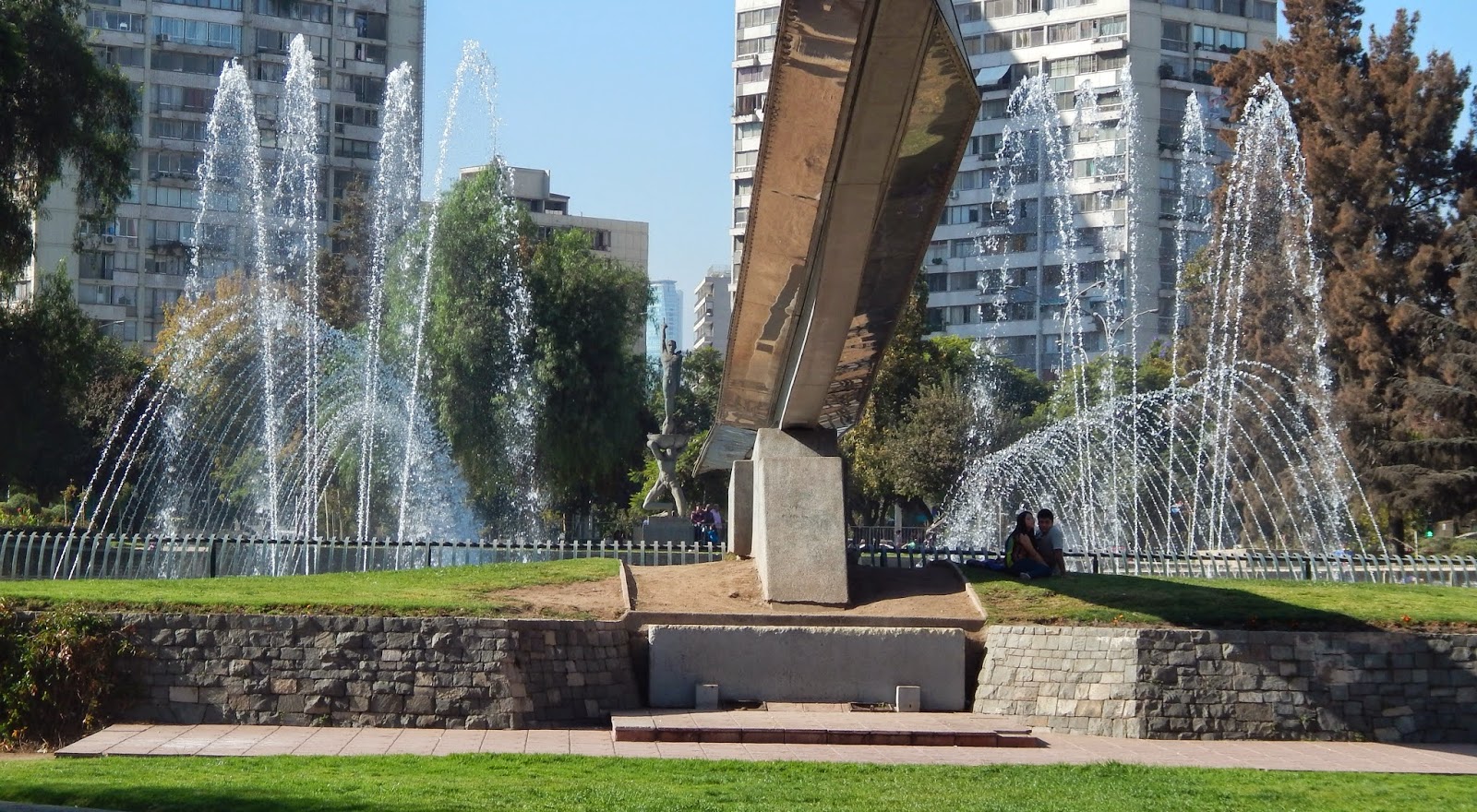 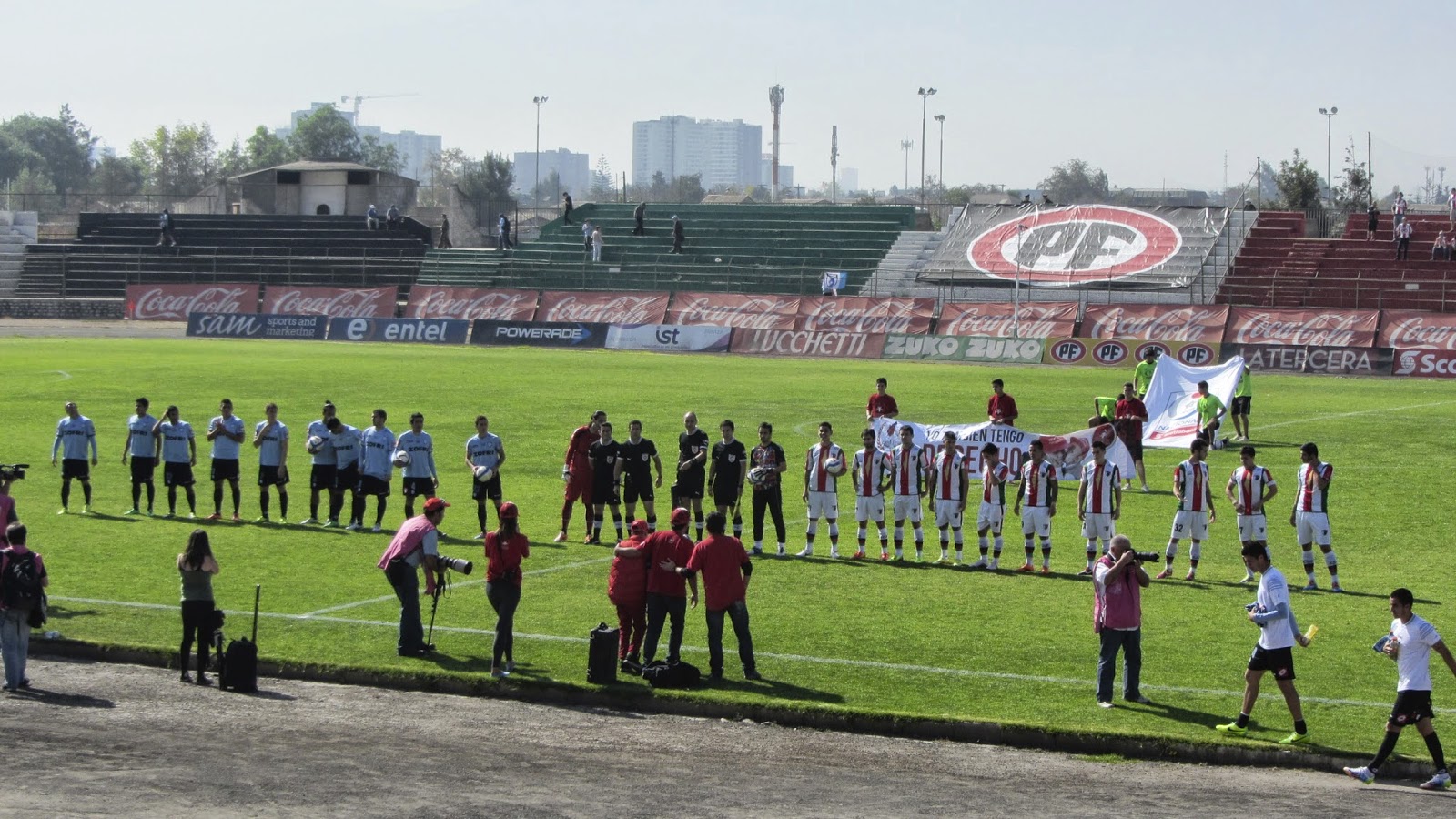 Craig
John and I looked at maps ahead of time to know the way to the football stadium. Neither of us bothered to look at the crossroad though and thus were stuck following a gentleman wearing the kit of our adopted team, Palestinos, in the hope that he was going to the game.

Palestinos was started by Palestinian immigrants in 1920, they recently made the news when they changed all of the number 1's on their jerseys to maps of Palestine. Being unsure of the metro system we gave ourselves extra time and thus arrived at the ground much ahead of time. 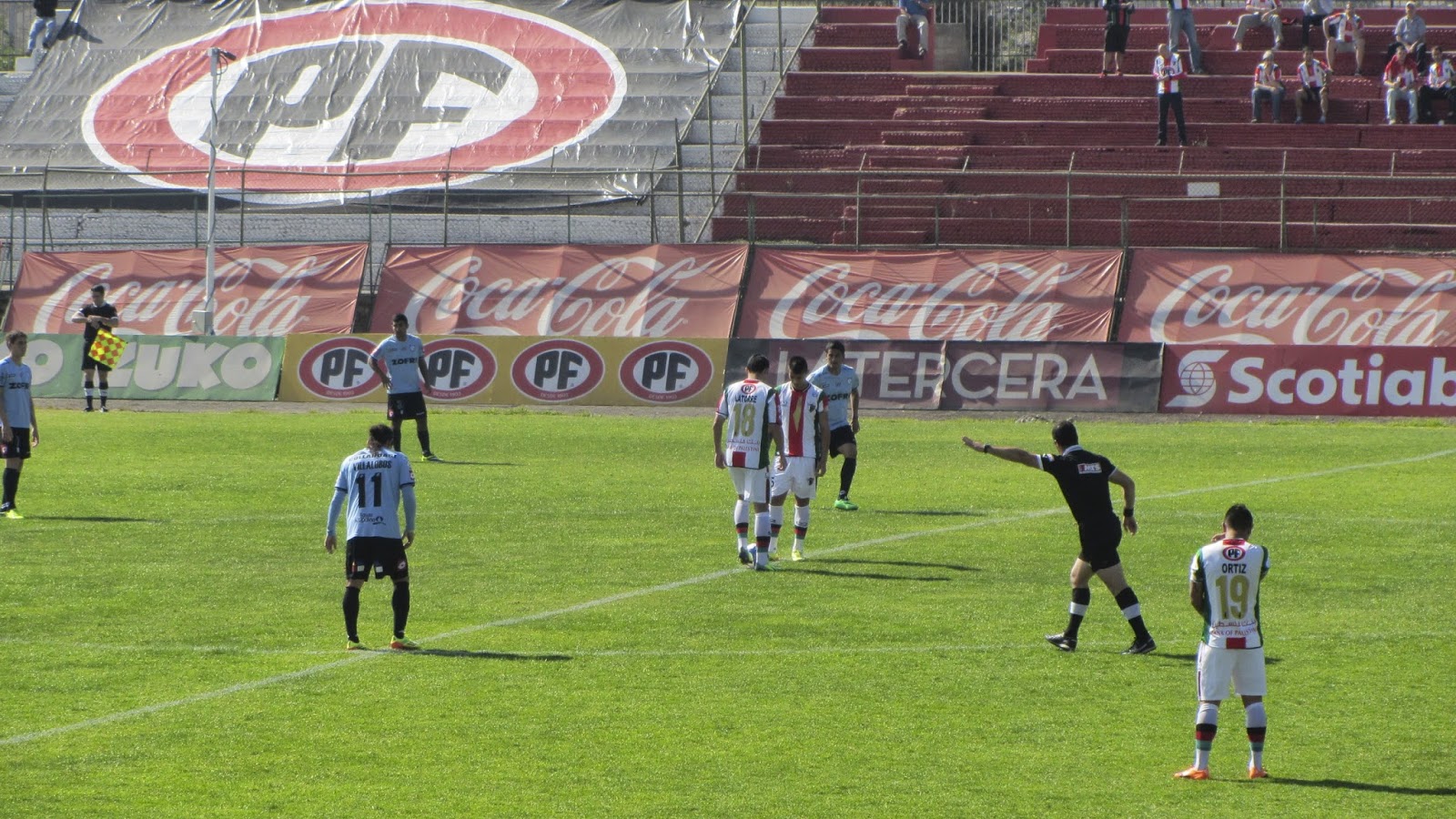 It was the final game of the season, and as Palestinos was securely in 4th, the game did not draw a large crowd. The match was fast-paced and exciting, but our fellow fans were quiet, and our boisterous shouting in English was pretty noticeable, only the opposing fans seemed to have their hearts in it. In the end, our brave freedom fighters were not able to put one past the opposing keeper who was backed by the slanted refereeing and we fell to Iquique 1-0. 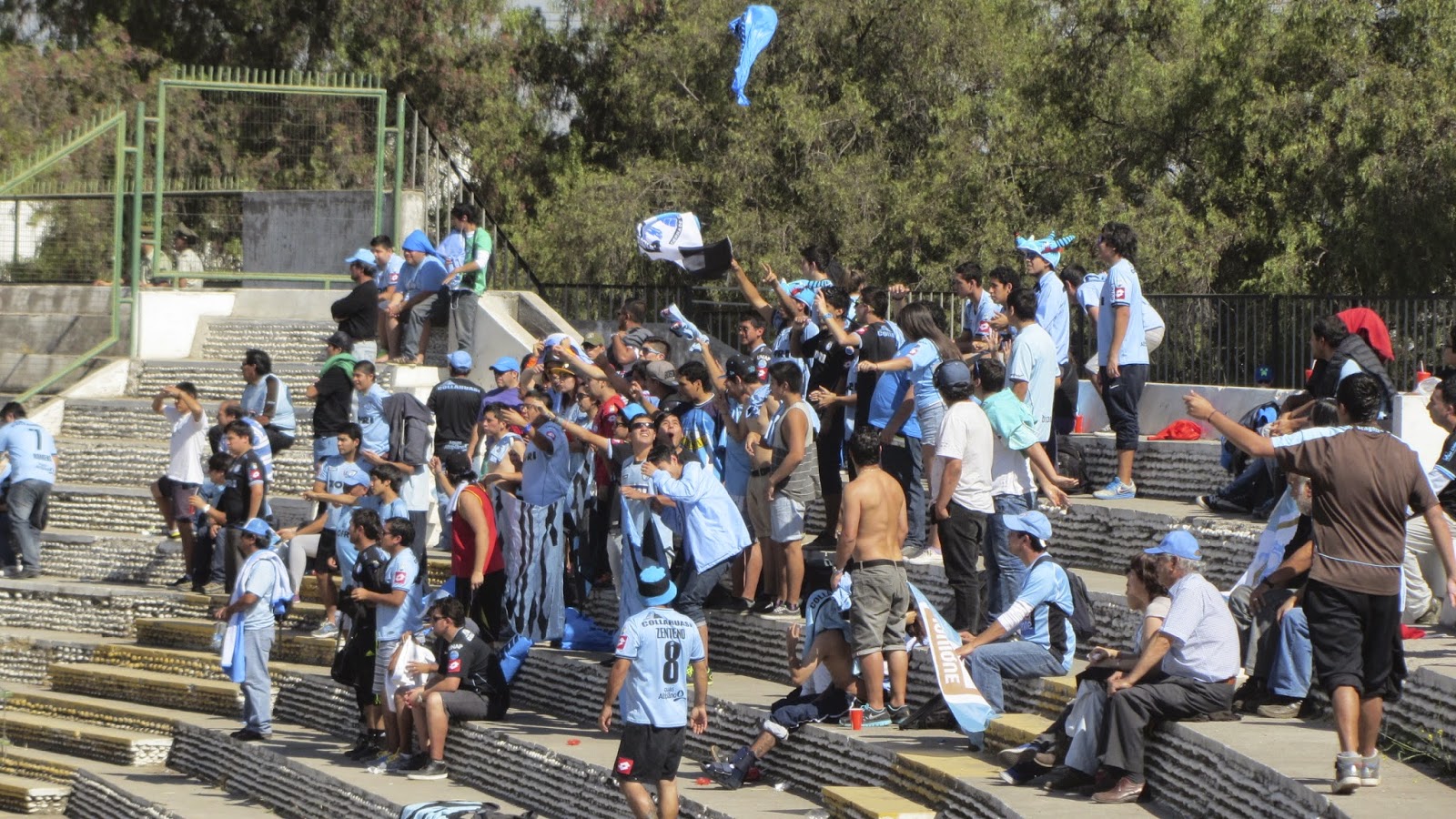 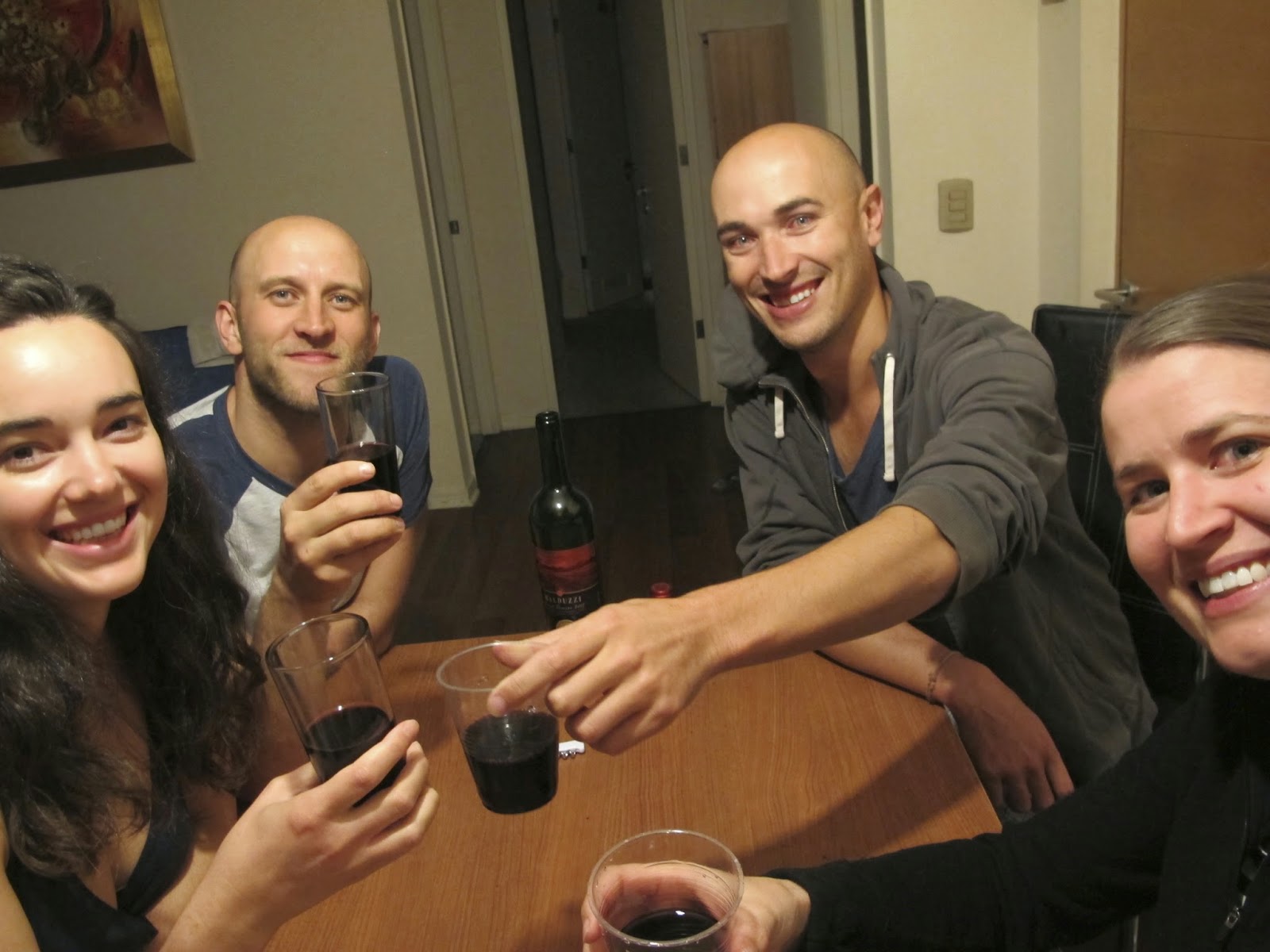 Us
We finished up the day once more by watching another gorgeous sunset from our rooftop while cheersing this wonderful life with a glass of bubbly. With dinner, we enjoyed the fancy bottle of red we`d bought at the Balduzzi winery in Talca where we learned there is an italian grape variety known as `Tears of Christ` that adds the heavy red colour to the wine. It felt appropriate to drink on Easter weekend.
Posted by Craig & Erin at 1:00 PM