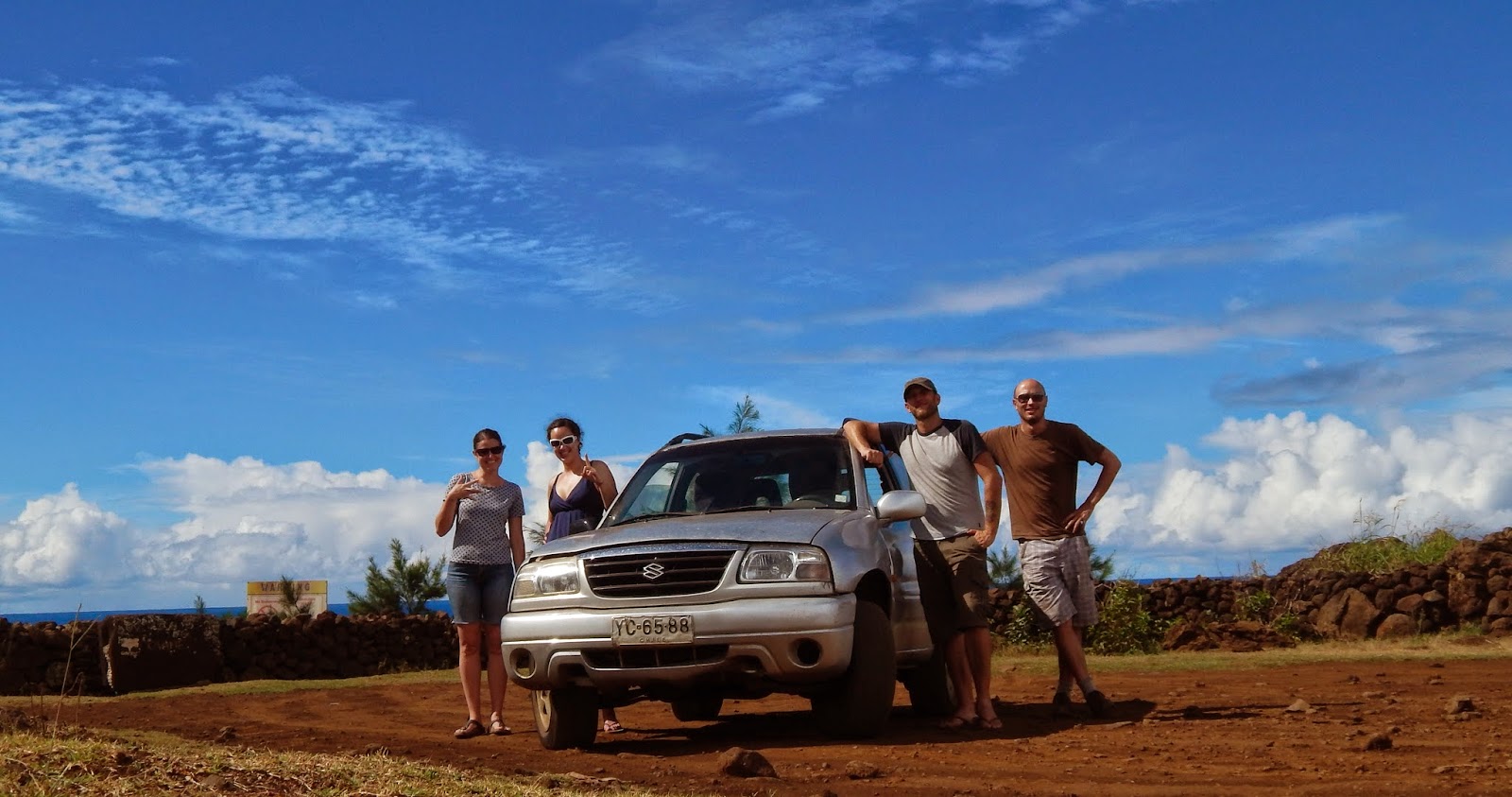 With not even a gleam in the sky's eye, we were up and on our way. This time, Craig was at the wheel of a manual transmission, which meant it was not a smooth start. Considering the jeep was falling apart, had a terrible clutch, and Craig's limited experience, Craig did well making it to the second half of the day before his first stall. Though it is a miracle that no one got whiplash during the first few gear changes. 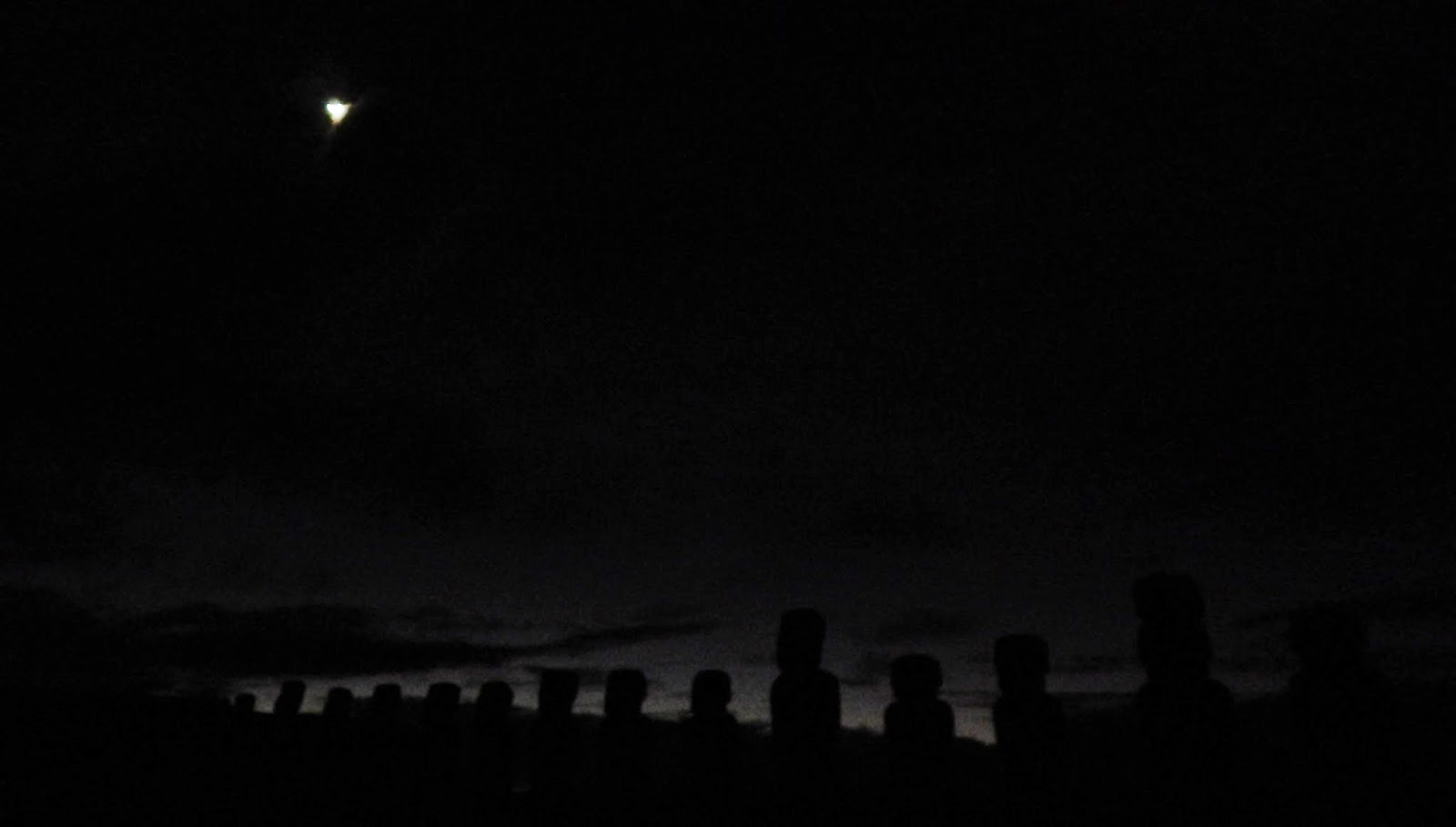 Navigating the dark island was easy, even if signs were put at the turn-off or sometimes after. A few scooters sped past us; anyone who was awake at this hour was heading to one spot: Ahu Tonga Riki. Fifteen moai lined up along the sea. The peninsula we visited the day before would gently block the rising sun behind them.

We laid plastic bags out on the dewy ground, then watched and waited as the silhouetted behemoths looming above us provided the screen for a dazzling light show. That moment when our eyes adjusted and the sky lightened just enough so that we realized we could see the moai gave us goosebumps. The sky slowly evolved from ink-black to deep navy to patches of yellow-white; then just when we'd given up hope of a colourful sunrise, streaks of pink and purple appeared. Captivated by the early morning sun as it hit the cliffs and green craters around us, we lingered longer than most. 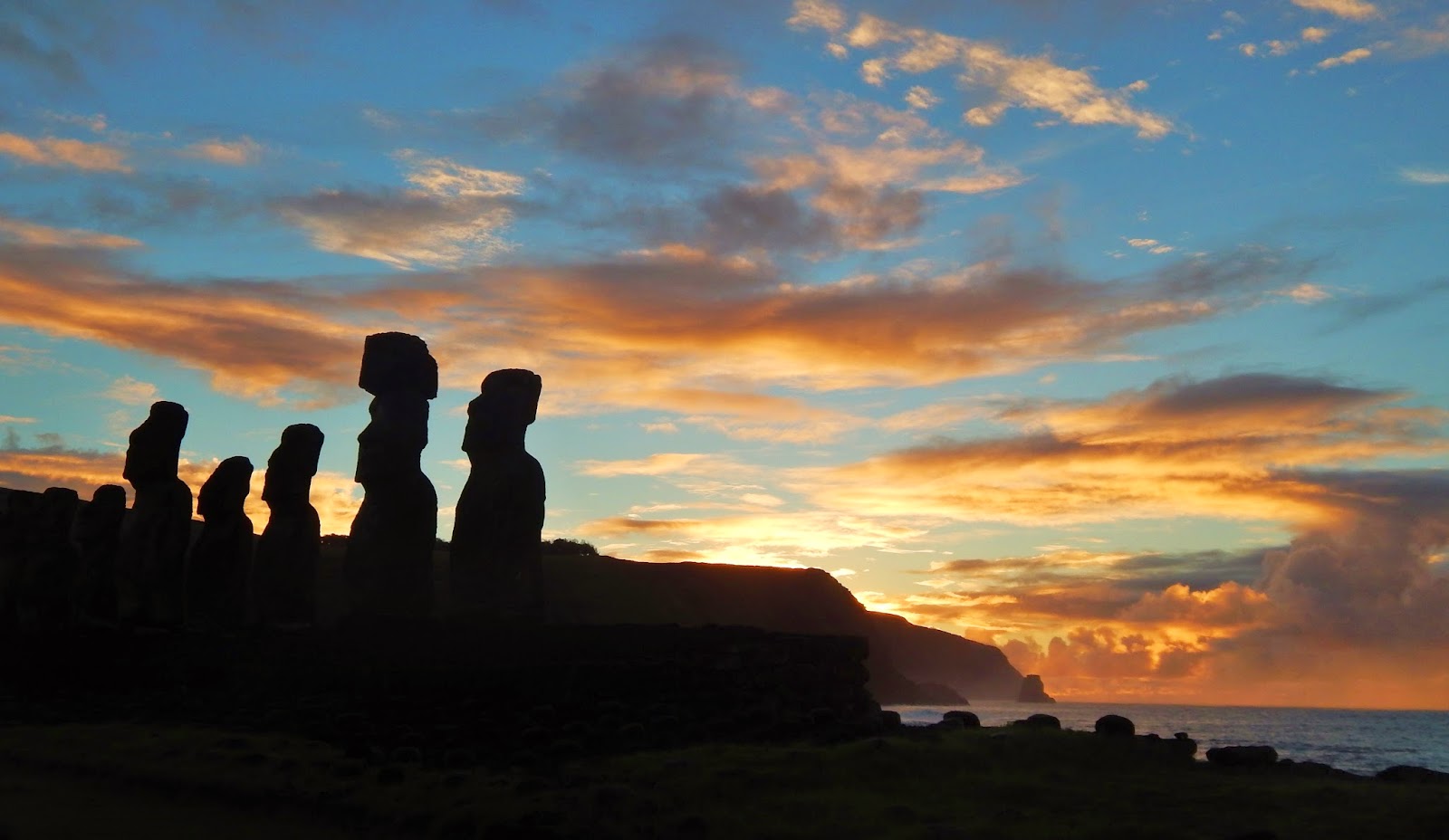 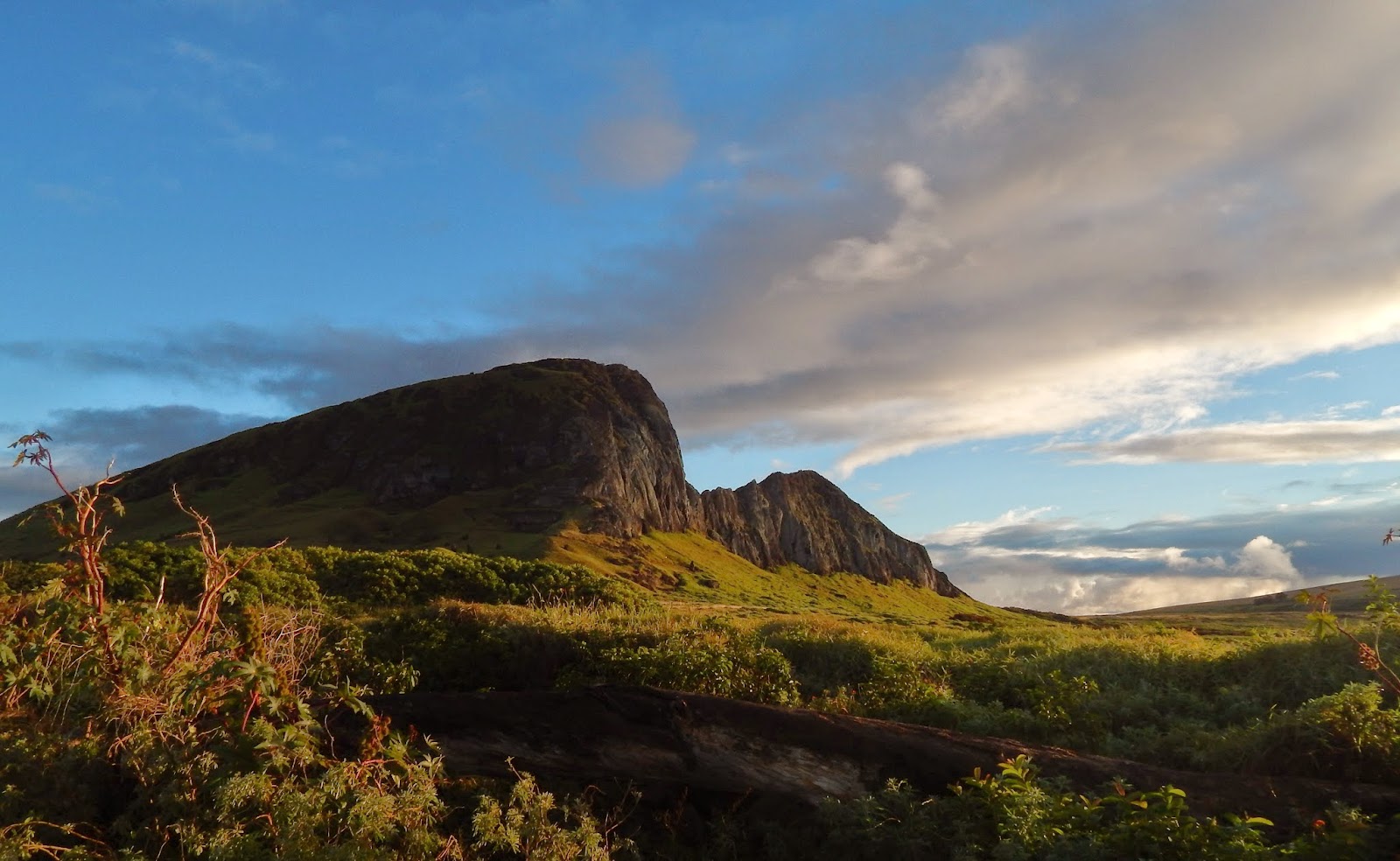 Timed perfectly, we arrived at Rano Raraku at 9:01 am. As it opens at 9, we only had to wait 15 minutes for the park workers to unlock the gate. Also known as the Quarry, this is where the moai were cut from the stone of the outer crater wall. Walking around it gave us the feeling that it was truly a moai factory. When they fell out of fashion, the moai were abandoned in various states of completion. Some are vague outlines etched into the mountain, others are ready to be painstakingly shipped across the island, but the most iconic image is of those that had been stood upright in pits to allow for the carving of designs on their backs. 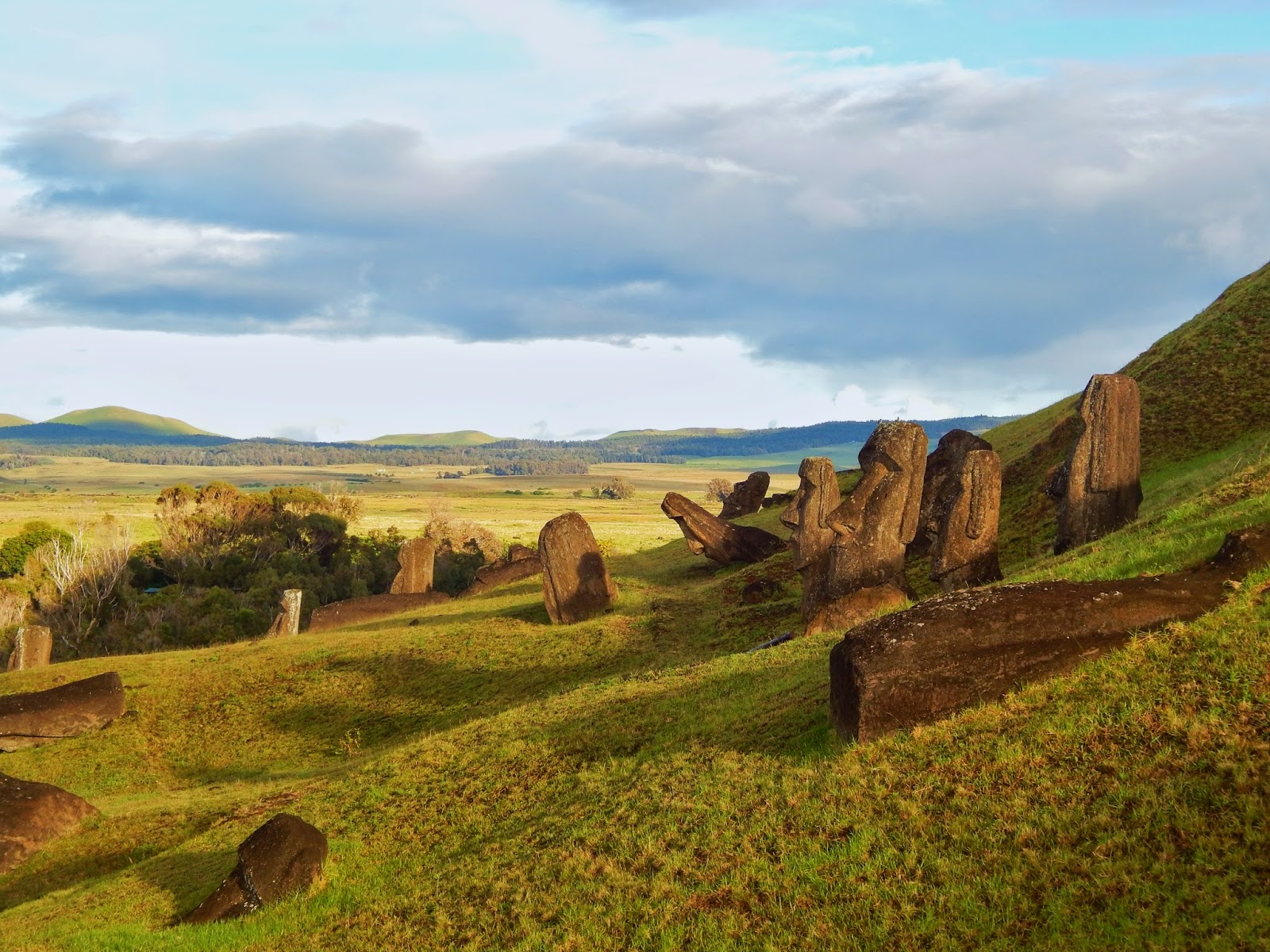 We now know that time and soil erosion led to those pits becoming filled, leaving only a head, and sometimes less, peaking out of the ground at all angles. 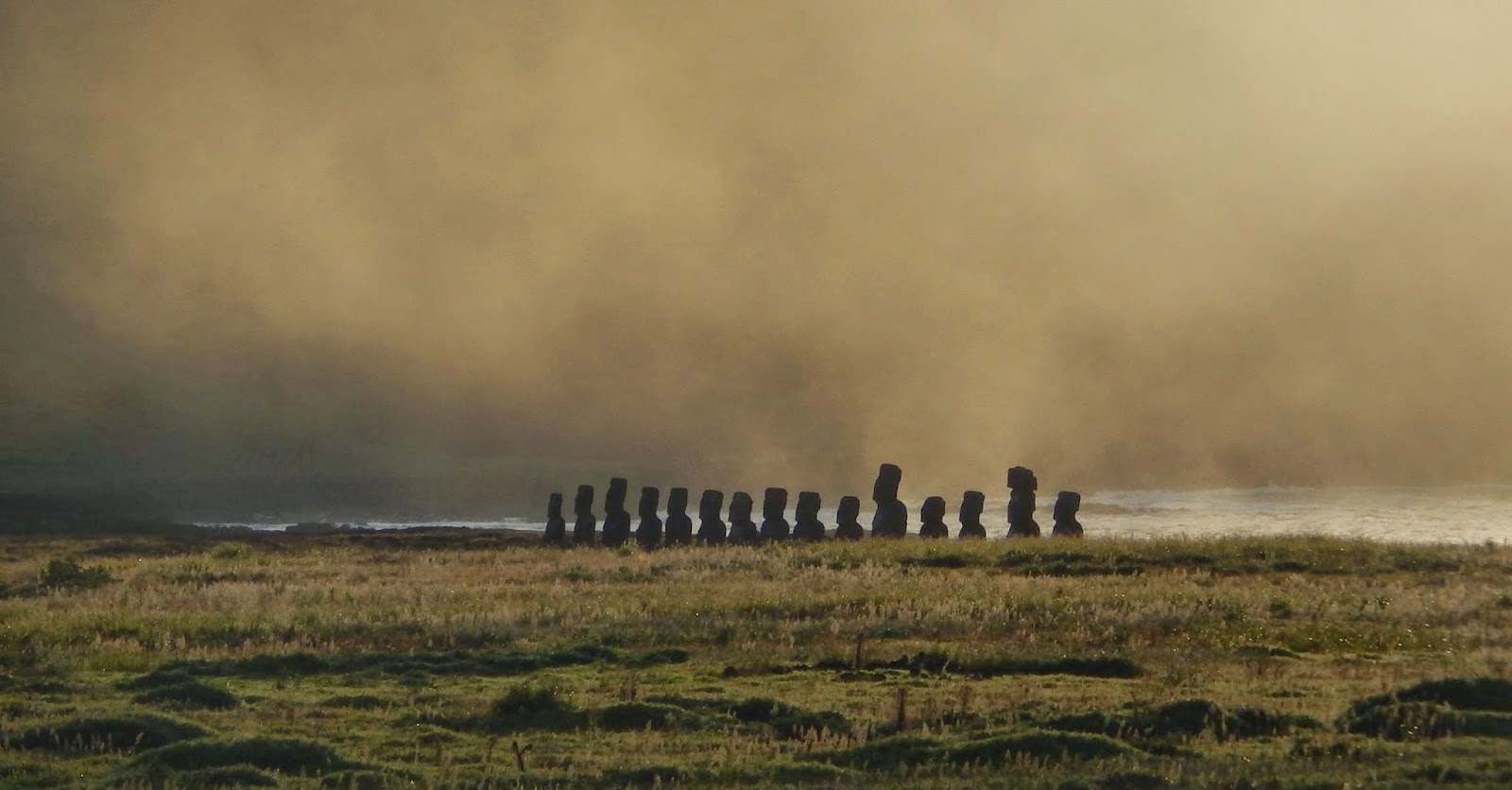 The sun was just beginning to graze the edges of the shallow slopes which the moai adorned. Beneath us, we could see "the 15" as the sun hit the waters of the bay behind them, gilding the mist of the advancing tide. 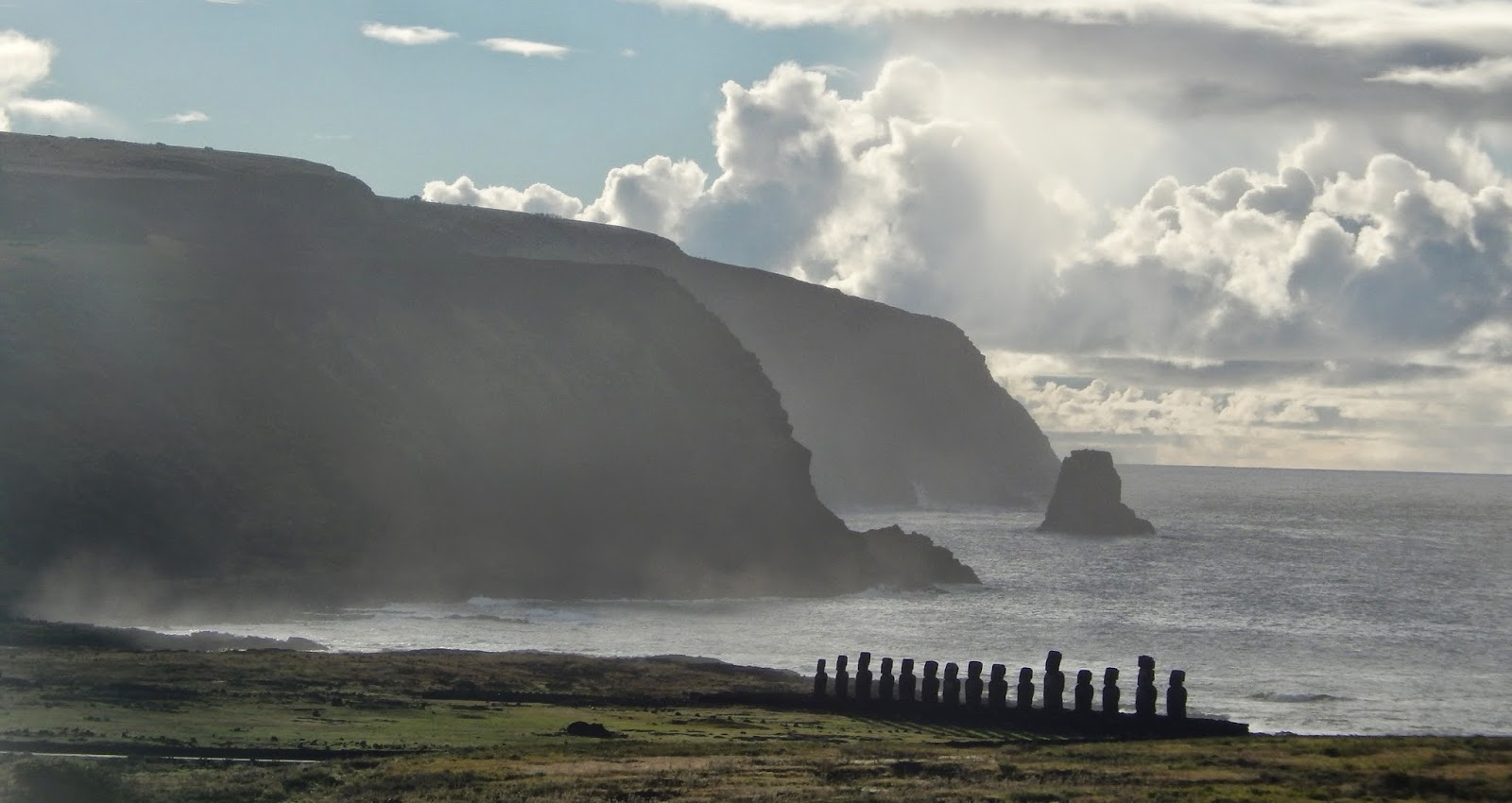 We were completely alone, standing in awe at each new view, inhaling deeply in the hopes that it might help us remember the moment. 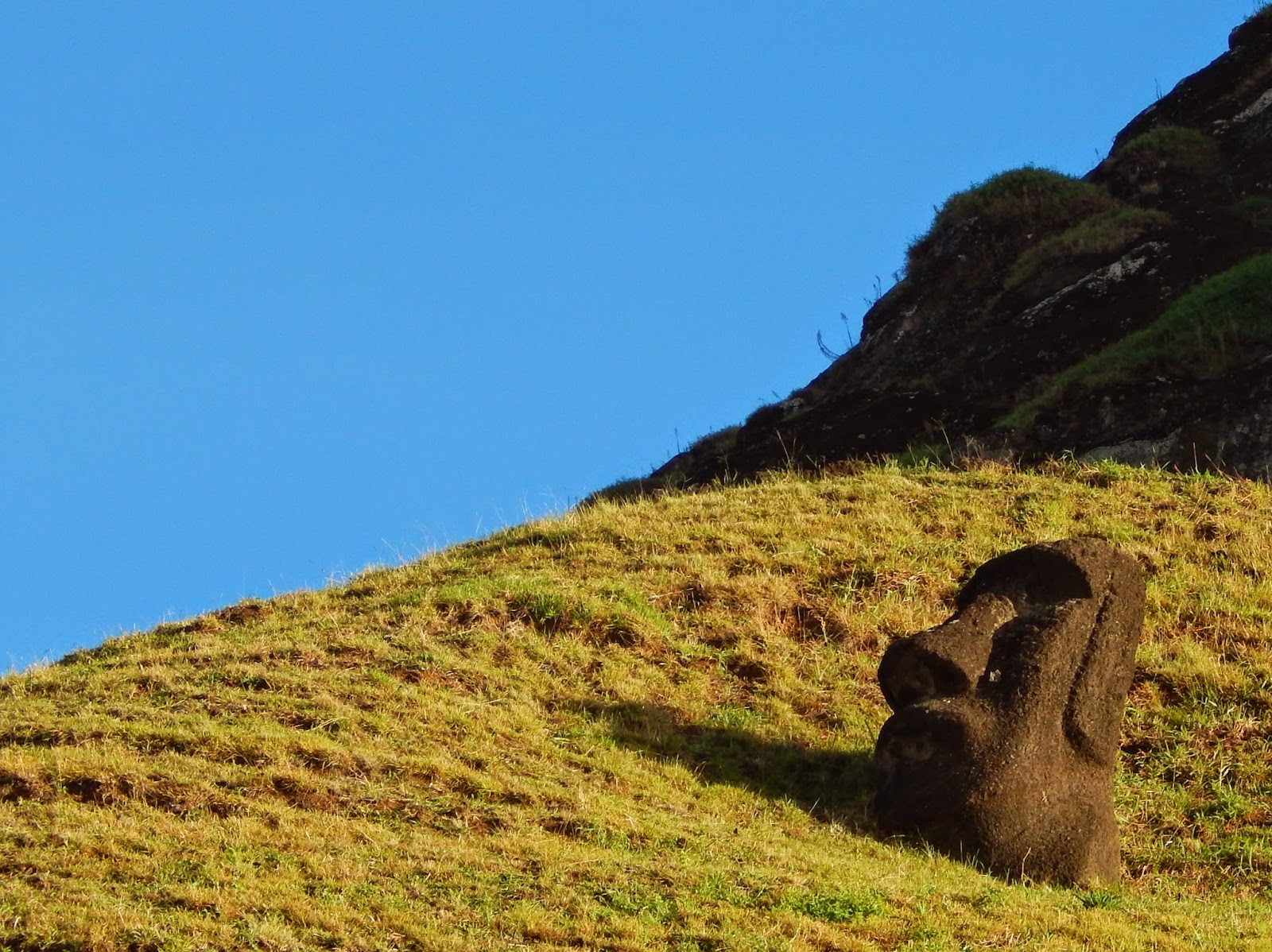 Erin was very excited to find the exact spot the picture she had seen as a girl was taken; it was the photograph that instilled in her a desire to visit Easter Island. 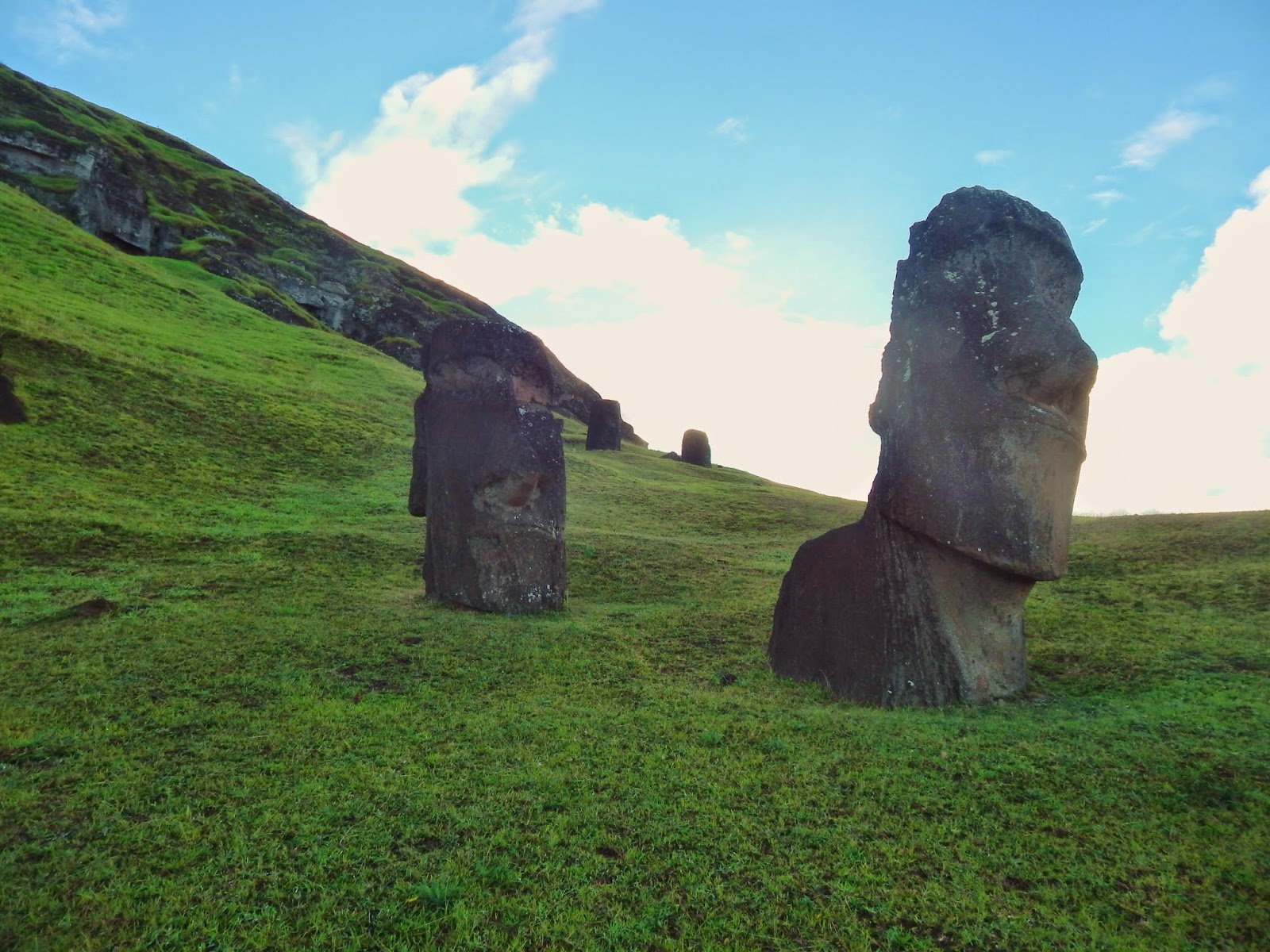 We ventured up into the crater afterwards, but disappointingly, the signage was quite confusing and certainly gave us the feeling that the loop around the marshy lake at the crater's centre was off-limits. 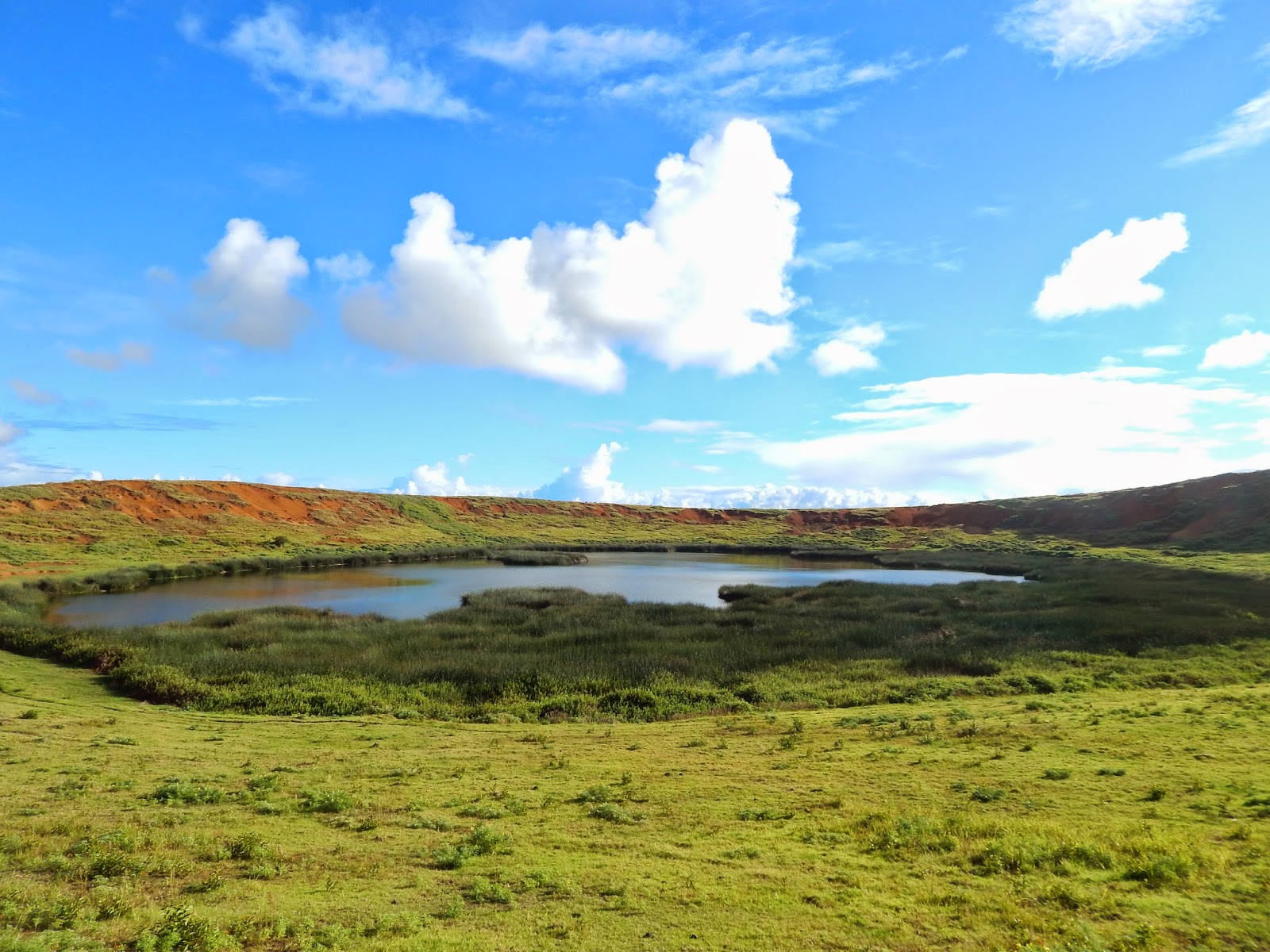 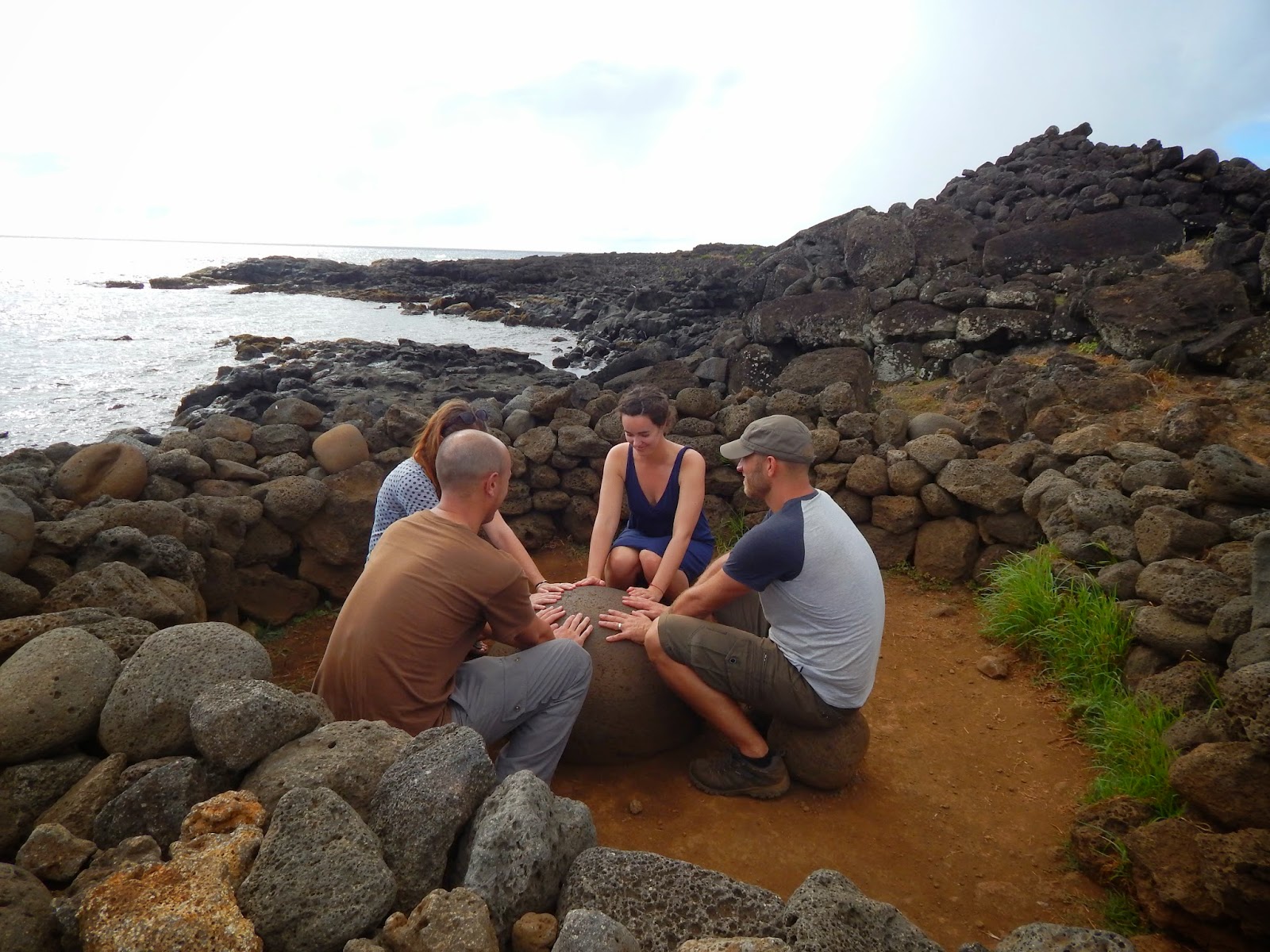 A few tour groups pulled up so we quickly left, not wanting our magical memory of the site disturbed. Back on the road, we went to the north coast of the island, stopping to see a few pieces of rock art and a rock with holes in it. The Rapa Nui used to blow into the hole, which made a noise they believed attracted fish to the shore. It was meant to bring good luck to the fisherman. 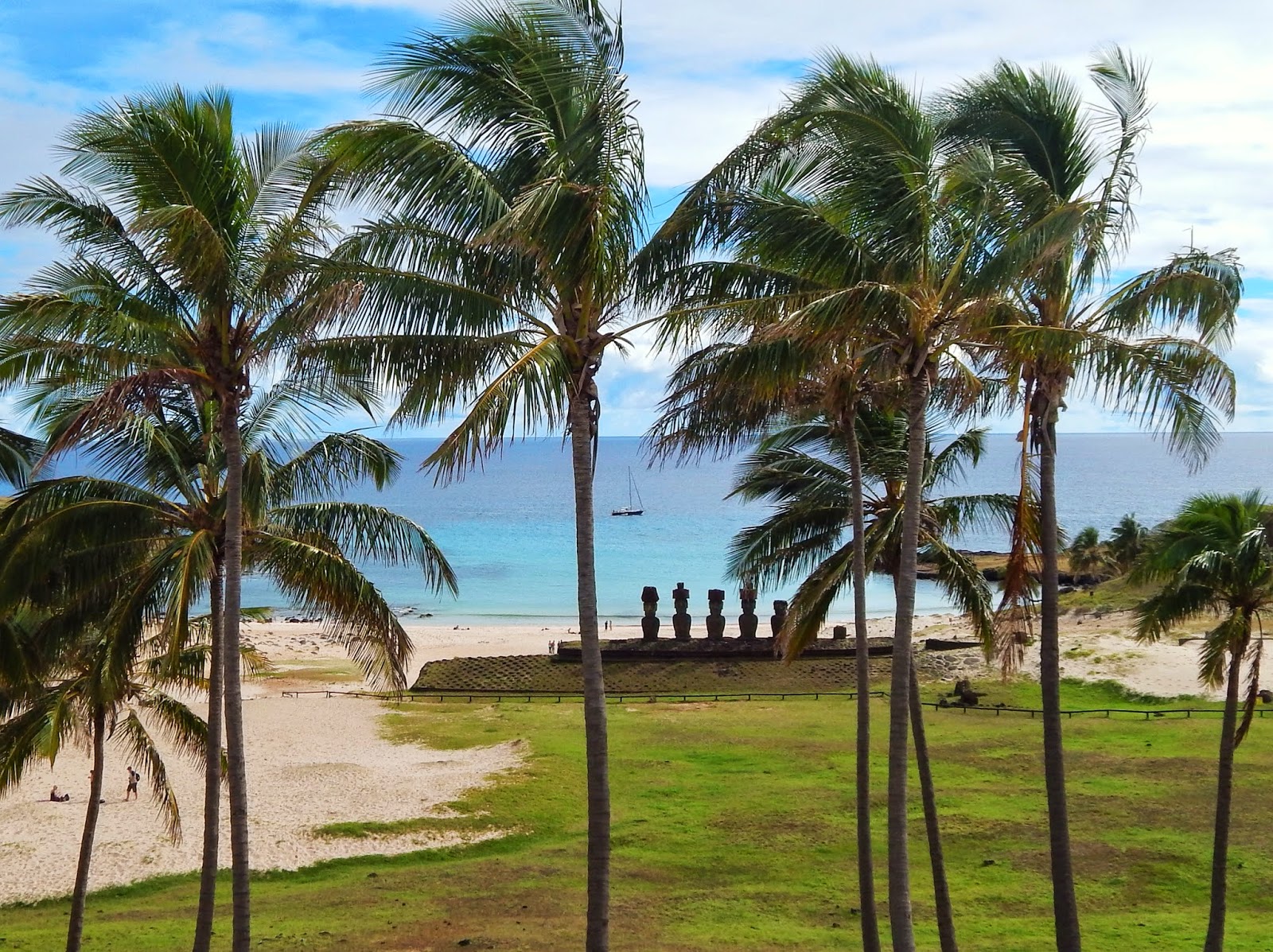 Our friend at the hostel, Isabel, had previously rented a car and warned us against going too quickly on the small island lest we do everything in half a day. With this in mind, we lingered at the petroglyphs, listening in on what the tour guides were saying in French or Spanish, and took our own quiet moment at the some weird energy rock at the Navel of the Earth (maybe we should've gotten a tour guide?). 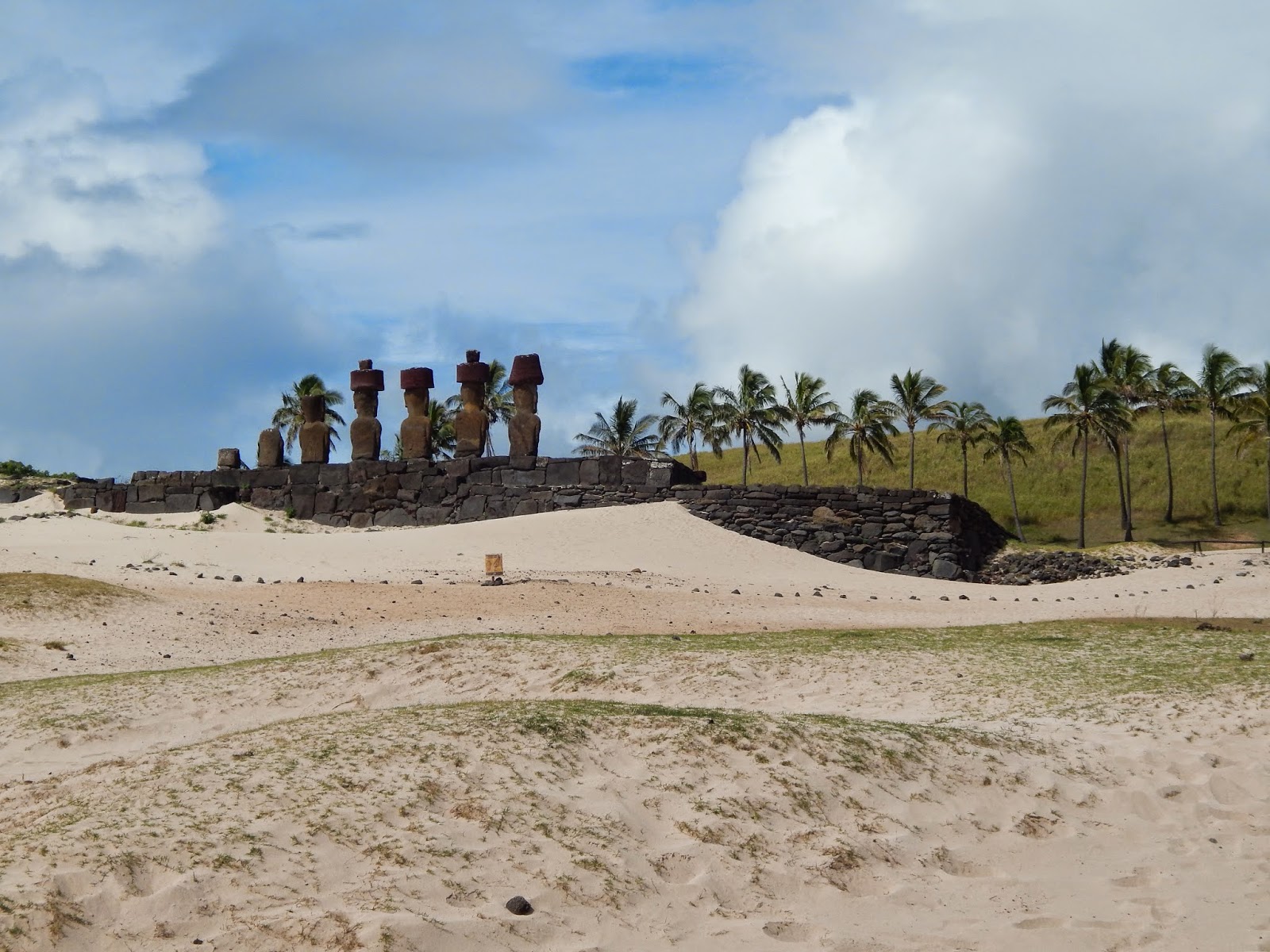 By this time, our stomachs were rumbling, along with the gathering clouds overhead, so we high-tailed it to Anakena, the one of only two sandy beaches on the island, to ensure we had at least a few moments of sun in the surf. As the rest of settled in to have a picnic lunch, Craig fought through thick bush to get a view of the moai with the beach in behind them. 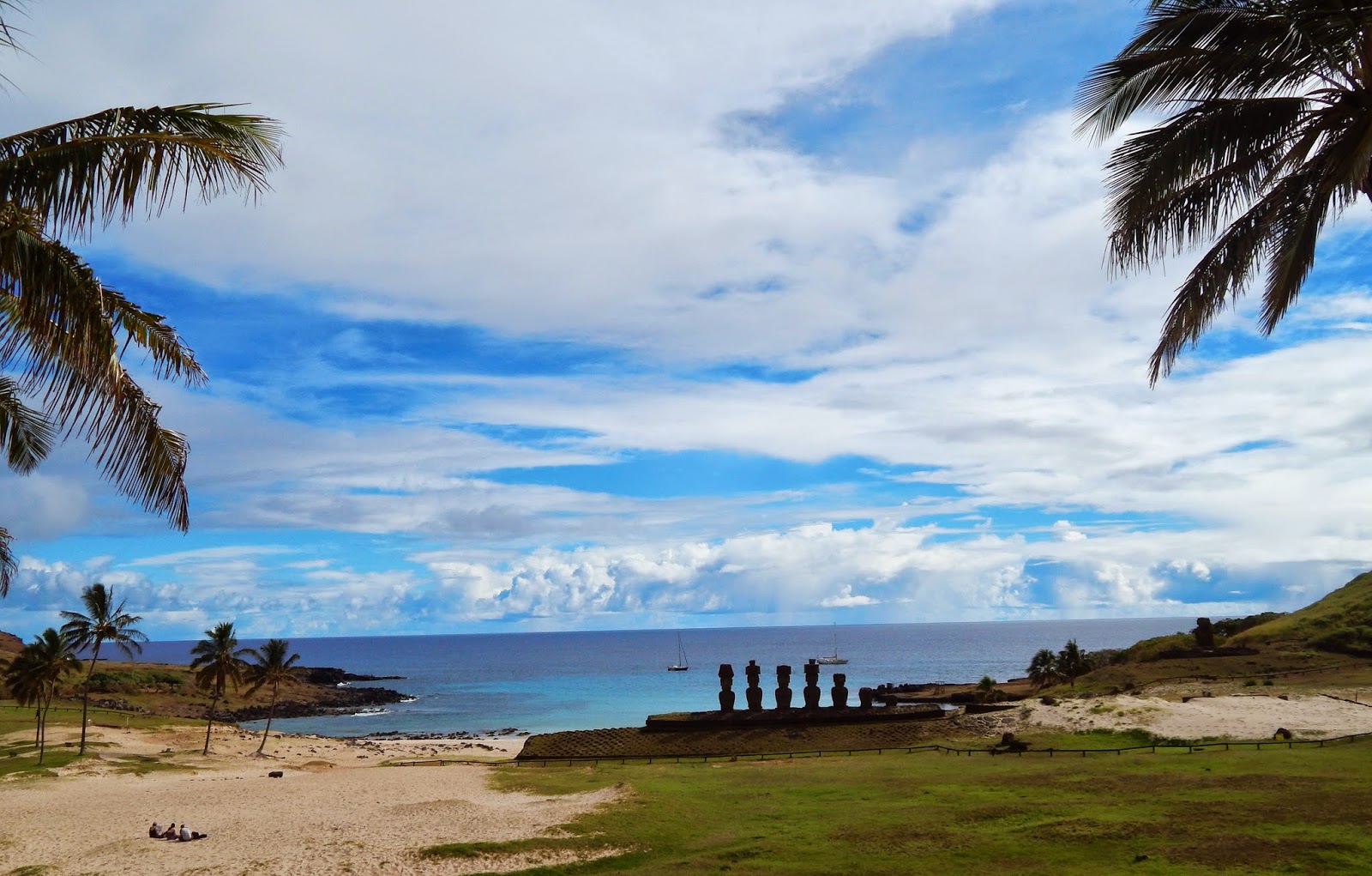 Then we all sat on the wonderful South Pacific sand and shared lunch. The next couple hours were spent lying on the beach and swimming in the calm, cool, and crystal clear water. We've read that Anakena had been formed by a tsunami years ago. Legend also states that it was the landing site of Rapa Nui's first settler, Hotu Matu'a. It was also used as a ceremonial place by the Tangata manu (Birdman). 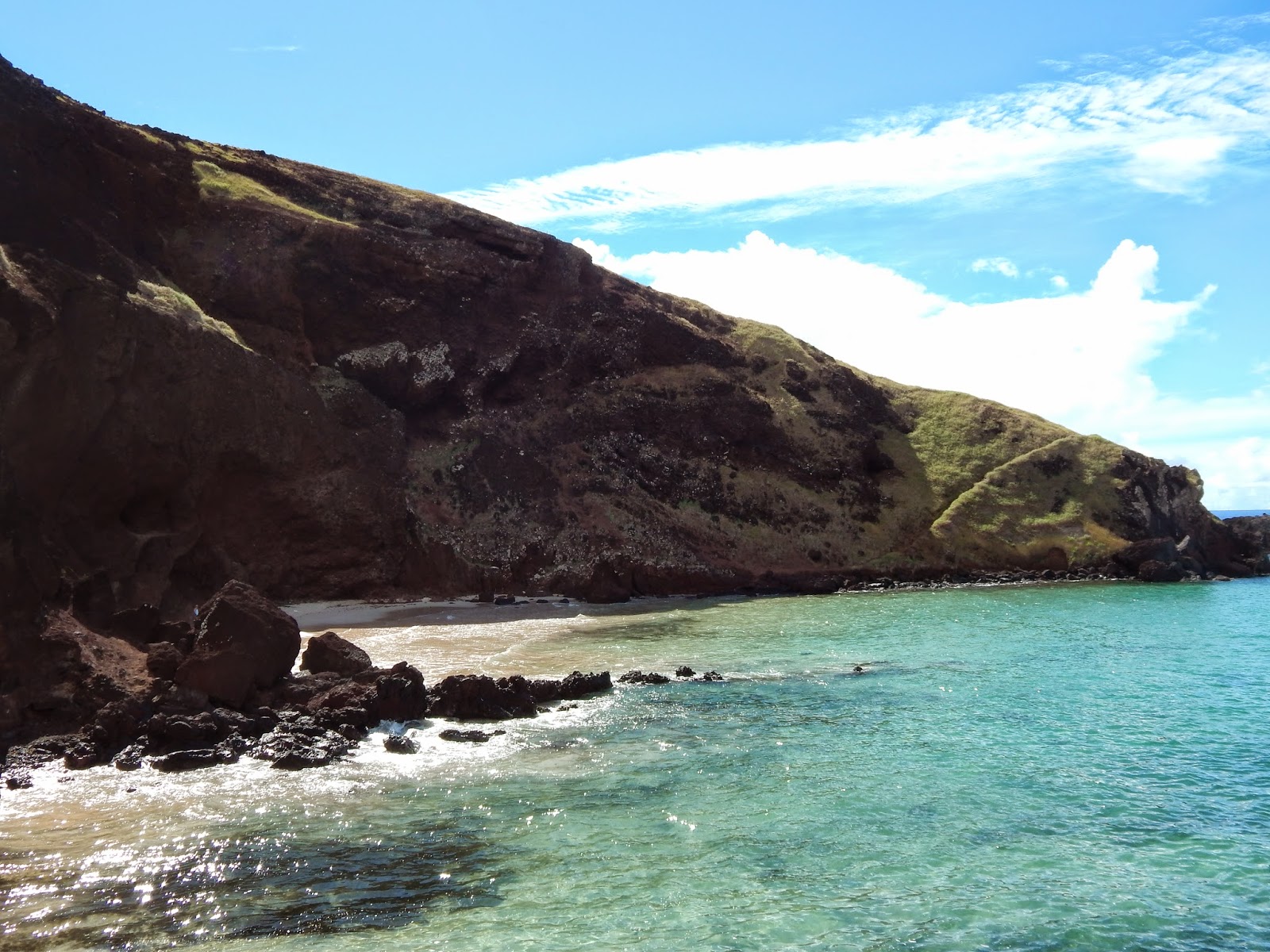 After our home-made lunch and fresh pineapple juices from a stall, we drove around the corner of the rocky outcropping to take a peek at the other, much smaller, sandy beach. O Vahe is a secluded crescent of sand beneath a rocky ledge. It's off-limits for visiting because of the falling rocks that tumble down from the cliff above. We noticed a couple who were ignoring the warning signs and having their own private picnic and swim and tsked them from afar (but were secretly really jealous!). 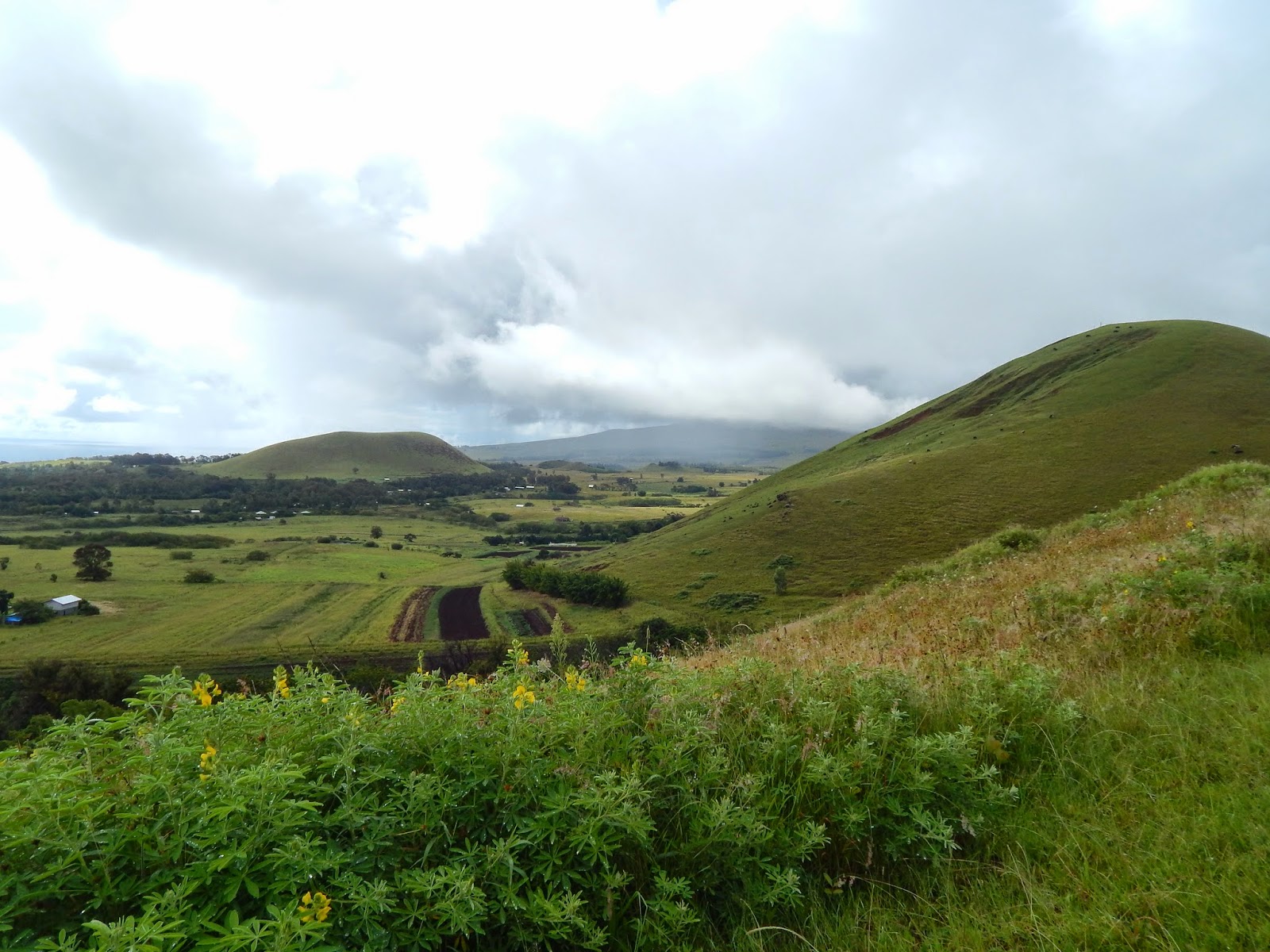 Heading back south on the island, while looking for a turn-off, we passed a sign pointing to the right with a long unfamiliar name. Since it was nearly completely obscured by trees, we were not sure if it was the correct road or not. We figured we might as well explore. The hard-packed gravel and smooth asphalt of the rest of the drive gave way to mud and deep ruts. At a fork in the road, we stayed on the more well-trod path, though we should have listened to Walt Whitman. A tree had fallen across the road, thus requiring Craig to preform a three-point turn on a hill in the mud. Unphased, we continued on, but were turned back shortly after when the mud turned to wet clay and the jeep began to slide. Winter driving experience helped as the vehicle slowly began to spin. Bringing it to a stop, Craig promptly turned us around and retreated to the main road. That's when we saw that a sign stood to our right, after the turn-off, indicating that no vehicles were allowed on the road. Maybe it is a cultural thing, but we would put that kind of sign before a driver would turn onto a forbidden road.


We managed to find our true turn-off further down the road, which brought us to a rather unimpressive look at the ancient topknot quarry, Puna Pau. After Rano Raraku, it was certainly a disappointment; a few red topknots lay on the grass, lonely without their owners. Topknots, or pukao, were carved from this red volcanic stone, and made to represent the hairdo of the Rapa Nui of the time. Much more impressive when adorning a moai, these hats can be up to 2.5 meters by 2.5 meters. They were carved with a slit in them to sit upon the heads without falling. 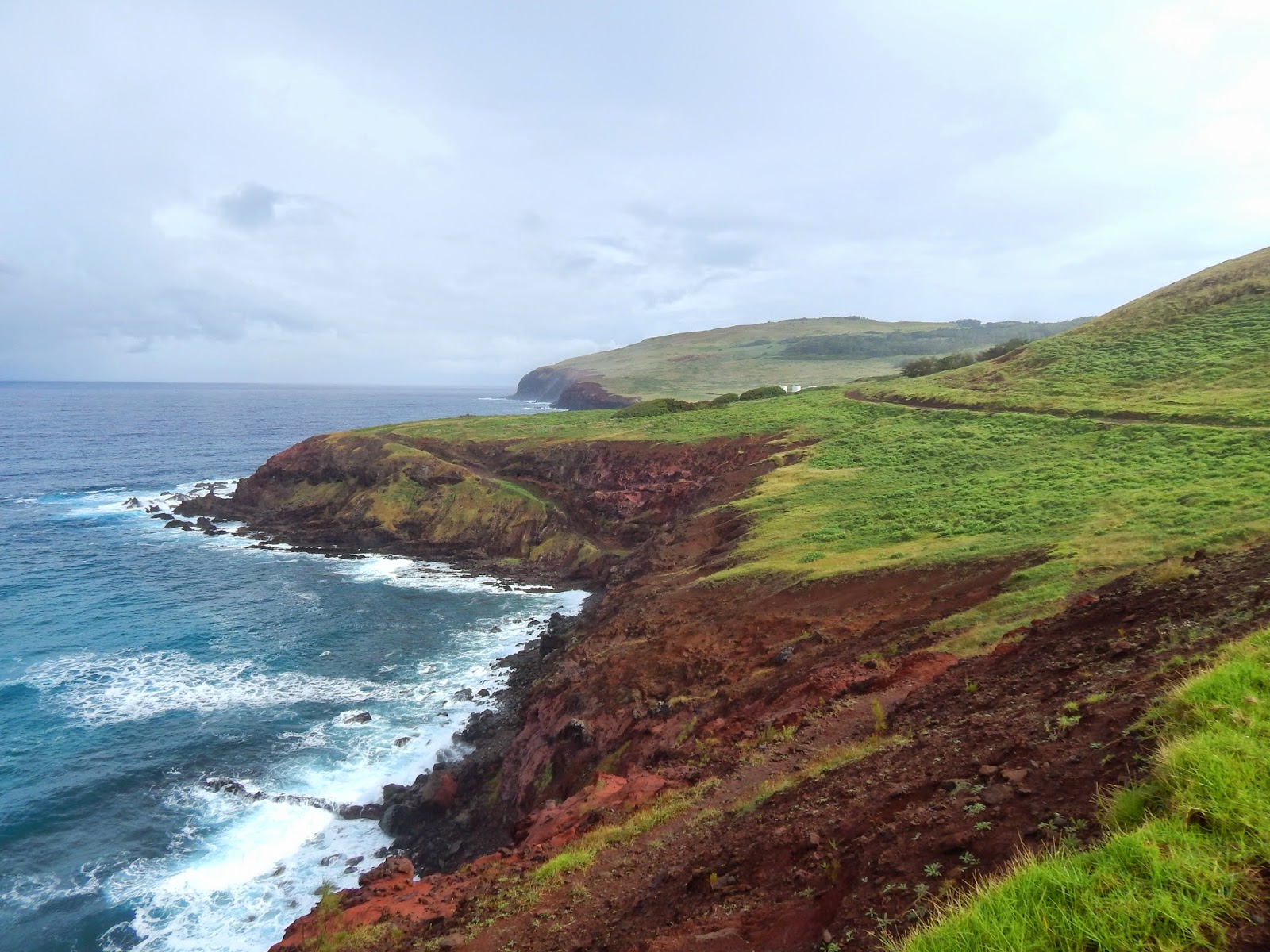 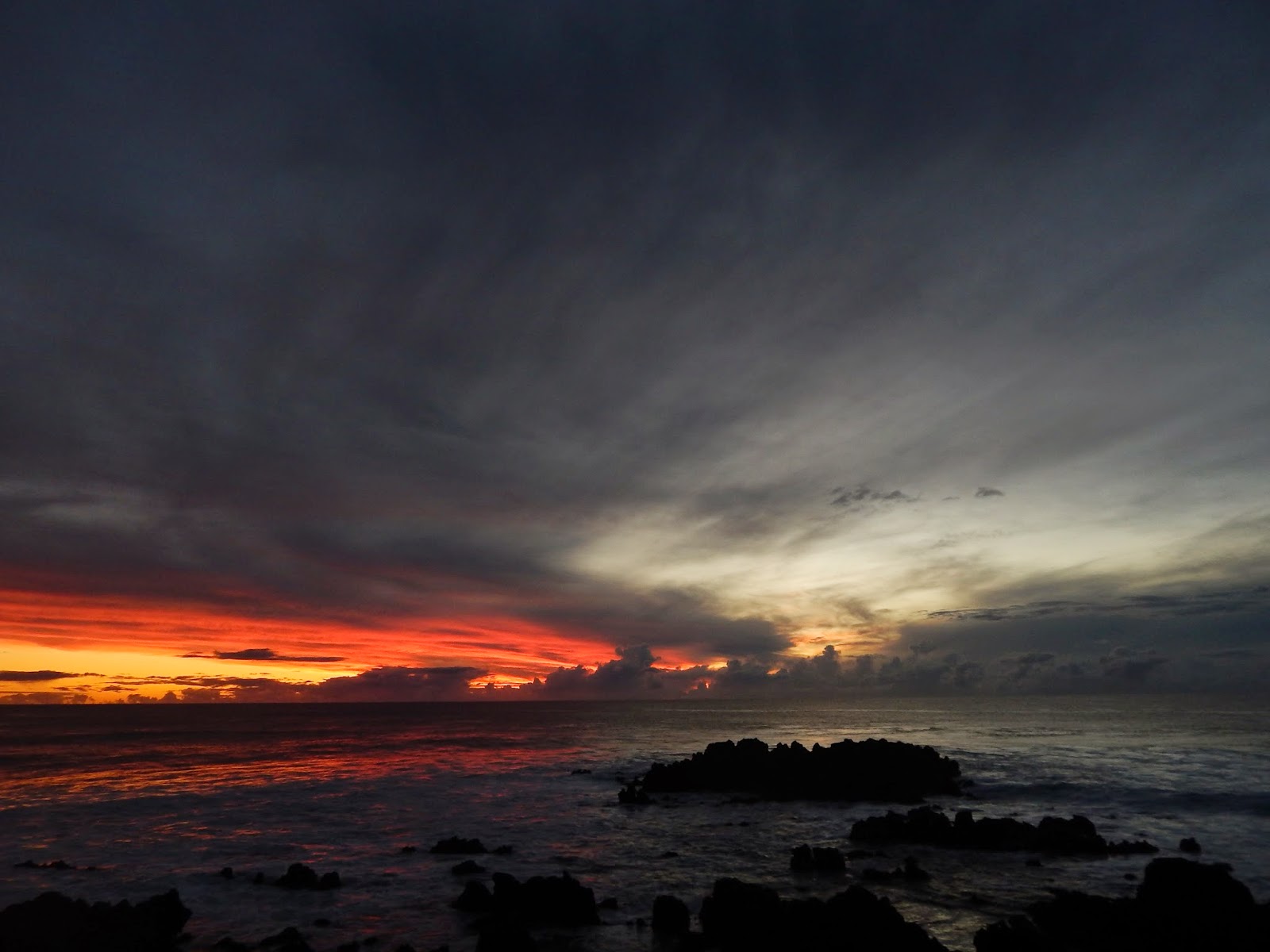 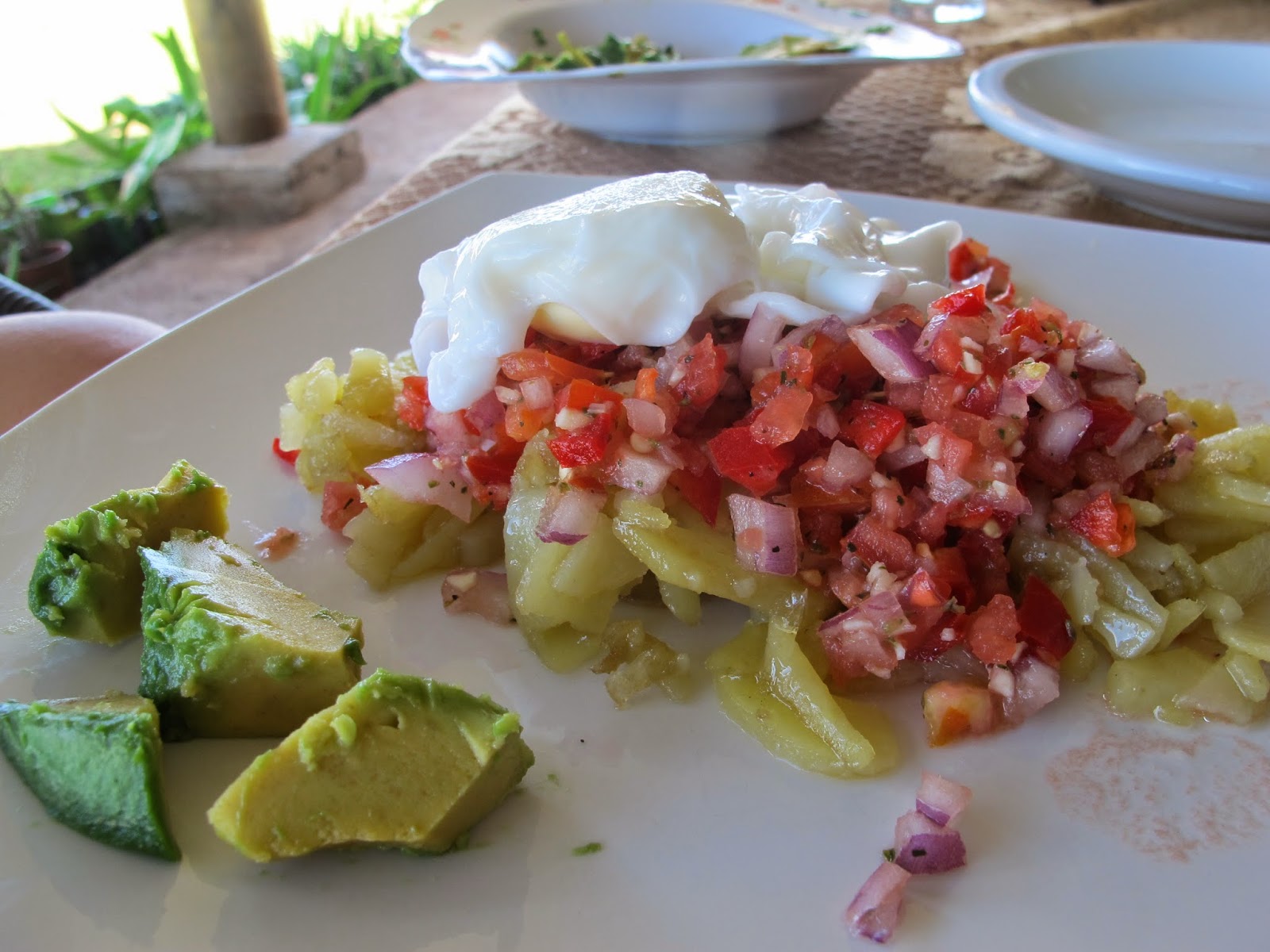 The rest of the day was spent driving the South-West road and revisiting the crater Rano Kau that we saw the first day. We attempted to get chicken and chips once again, but were denied the greasy pleasure and instead grabbed groceries for a home-made meal. Kristen, the only one of us who was inspired enough to think of an alternative to chicken and chips directed us so we managed to pull together fried potatoes topped with salami, tomato, green pepper, onion, garlic, guacamole, poached egg, and cheese, with sliced apples drizzled in honey caramelized on the stove-top for dessert.. We broke our detox in order to share a bottle of late harvest we'd brought from Santiago.