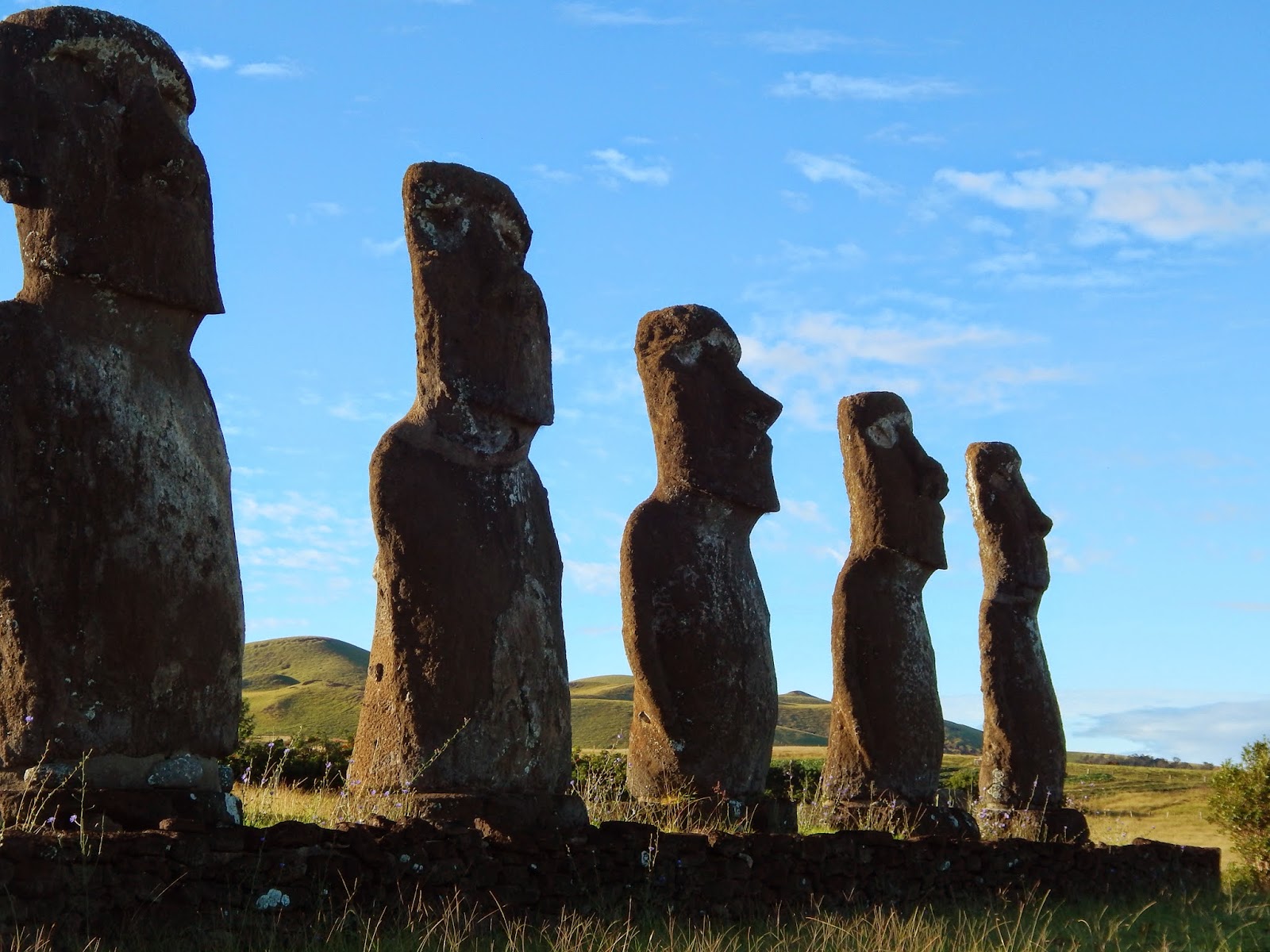 Not wanting to push ourselves too hard, we set a start time of 9:00 (the sun doesn't rise here 'til 8, so that's actually relatively early). Craig flagged down a taxi and we took it out to Ahu Akivi, a row of moai a few kilometres north of town.

What should have been a moment of reverence, as we were the only tourists there so early, was broken by the troop of grass cutters intent on cutting every blade one at a time. They blazed their way up and down the field in front of the moai and even on the ahu, slicing up the beautiful wild flowers that grew between the monoliths. Our carefully edited photos provide you with a look at how peaceful it should have been. 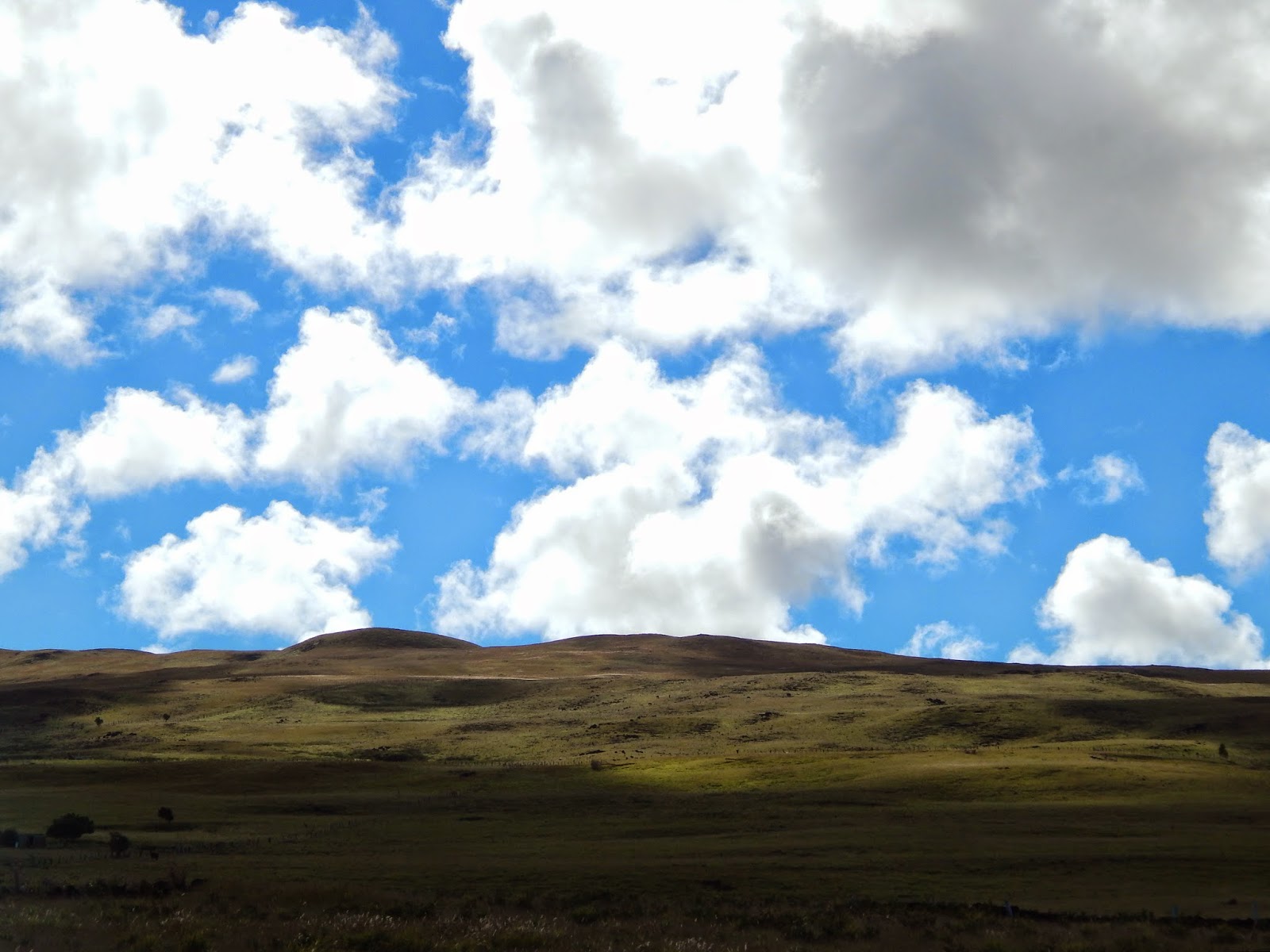 Intent on waiting these guys out, the two of us hung around longer than Kristen and John had the patience for. They finally gave us a little wave and headed for the trailhead of the highest volcano on the island, Tere Vaka. We felt that the sun had already risen too high and was beating down quite strongly to begin such a climb, so we opted to enjoy exploring the north road on our own.


We walked back down the road a ways to a poorly signed fork, hoping that it was the direction we wanted to go. 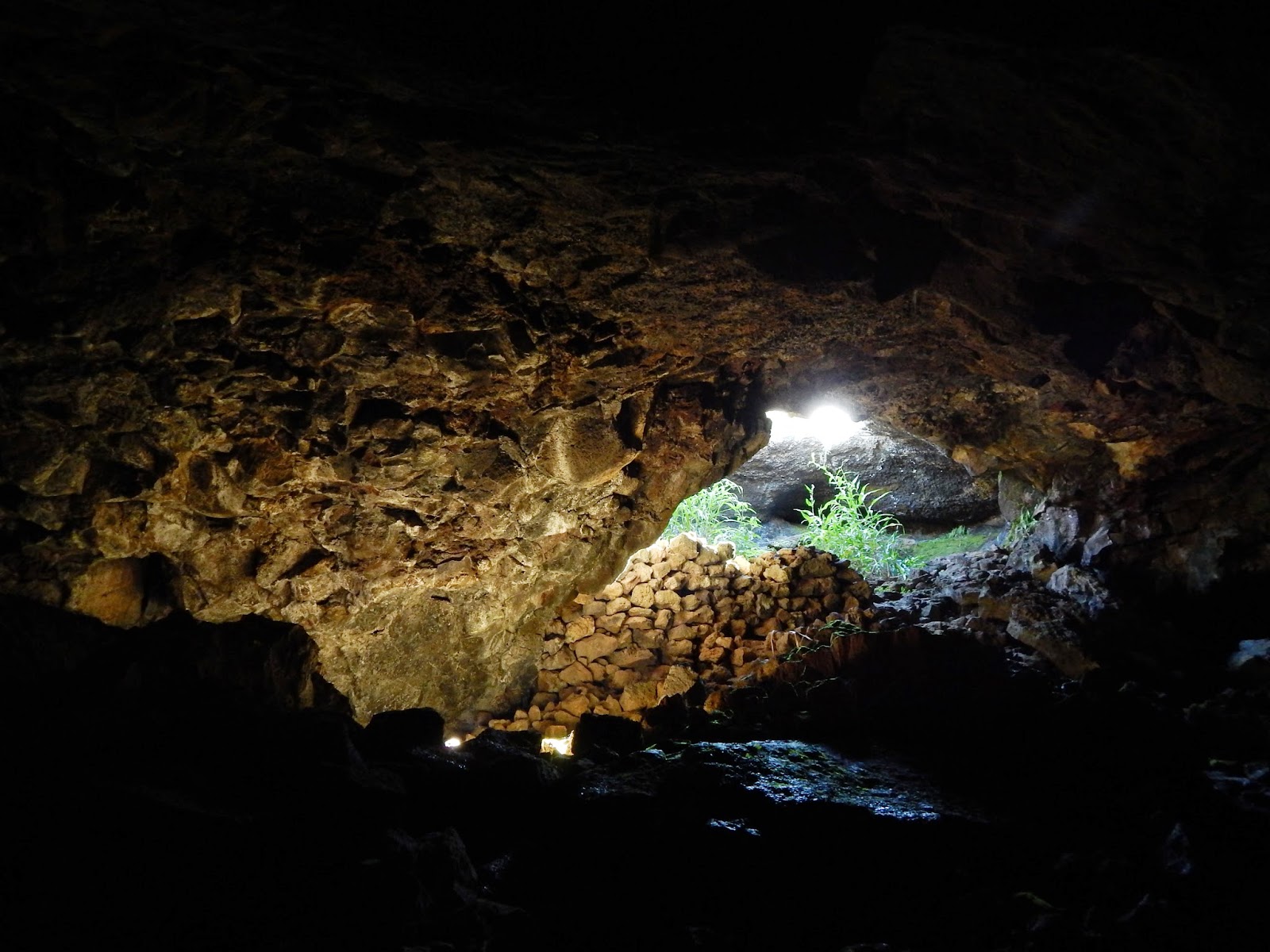 It wasn't long before we came upon three rental cars parked along the side of the road. Investigating we found what would become a common sight, an informational placard that had been painted over, obscuring all tidbits of knowledge. Unsure of what the significance of the various piles of stones was we continued on our way.

Our next stop was once again void of information. Apart from possibly a sign marking a point of interest, you will not find any information or sign posts along the north road. A little bit of wandering led us to the entrance of a cave.

Thinking ahead we had brought our headlamps but noticed once we turned them on that both were on their dying legs. We proceeded with trepidation. The cave continued for maybe 500 meters before emerging in a field.A quick scan of the horizon for the road and a few guesses had us back on track. 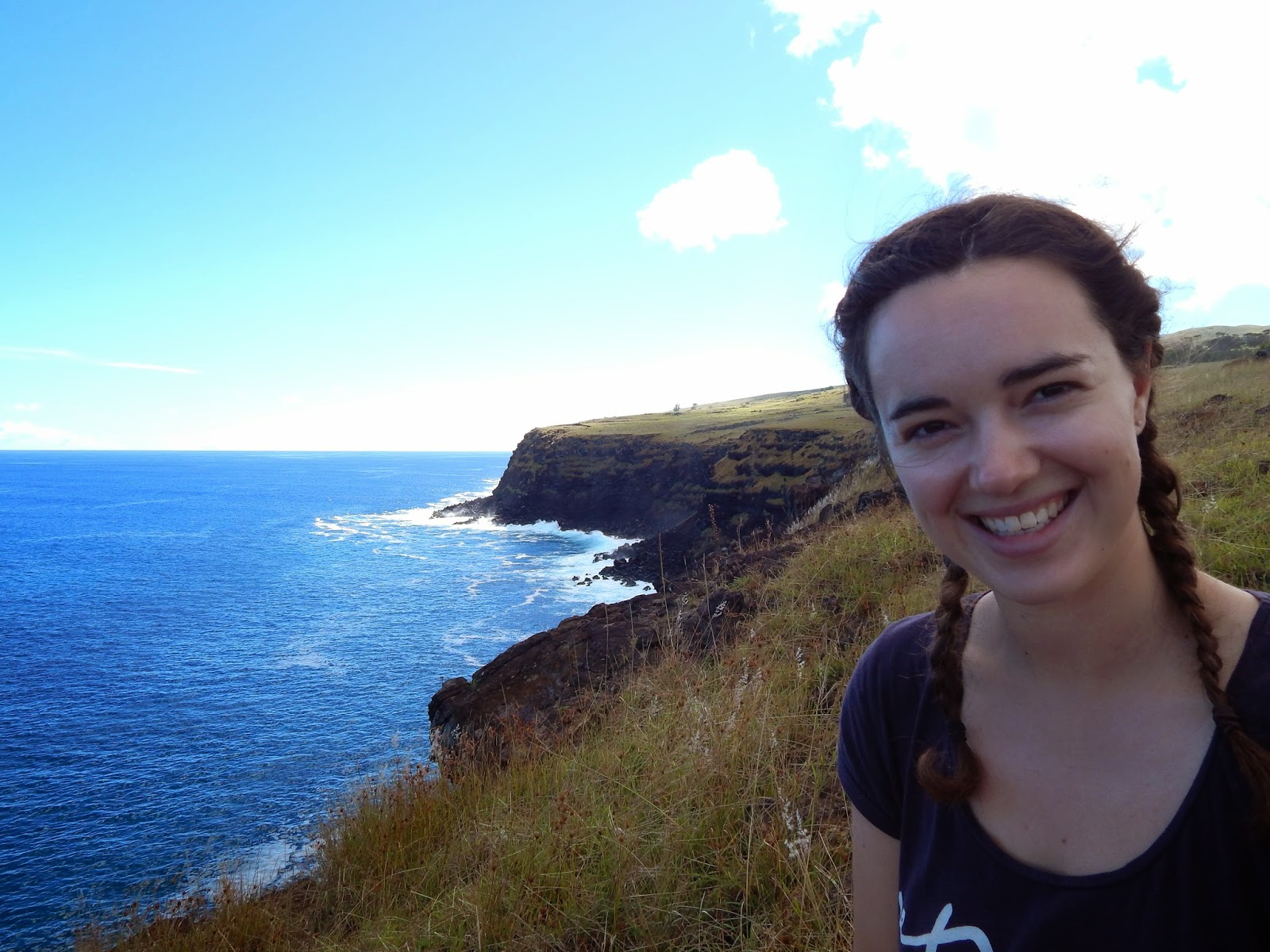 We reached the coast and nearly walked past some of the stoic heads of toppled moai strewn along the ground in and amongst the grass and stones of the burial mounds on which they were erected. These stone giants created a mystical atmosphere; we felt like explorers stumbling upon the ruins of an ancient civilization as we found more heads as we walked through the footprints of now crumbled homes. With no sign of any other human activity and the waves thundering against the rocks below us it was a marvellous spot for a picnic.

Rather than return to the road we savoured the isolation a little longer as Craig spotted a trail that ran alongside the cliffs, at a safe distance Mom and Dad. The trail curved towards the edge and stairs appeared under our feet. The brief descent brought us to the smallest cave of the day. From the edge we enjoyed an expansive view of the cliffs in both directions. 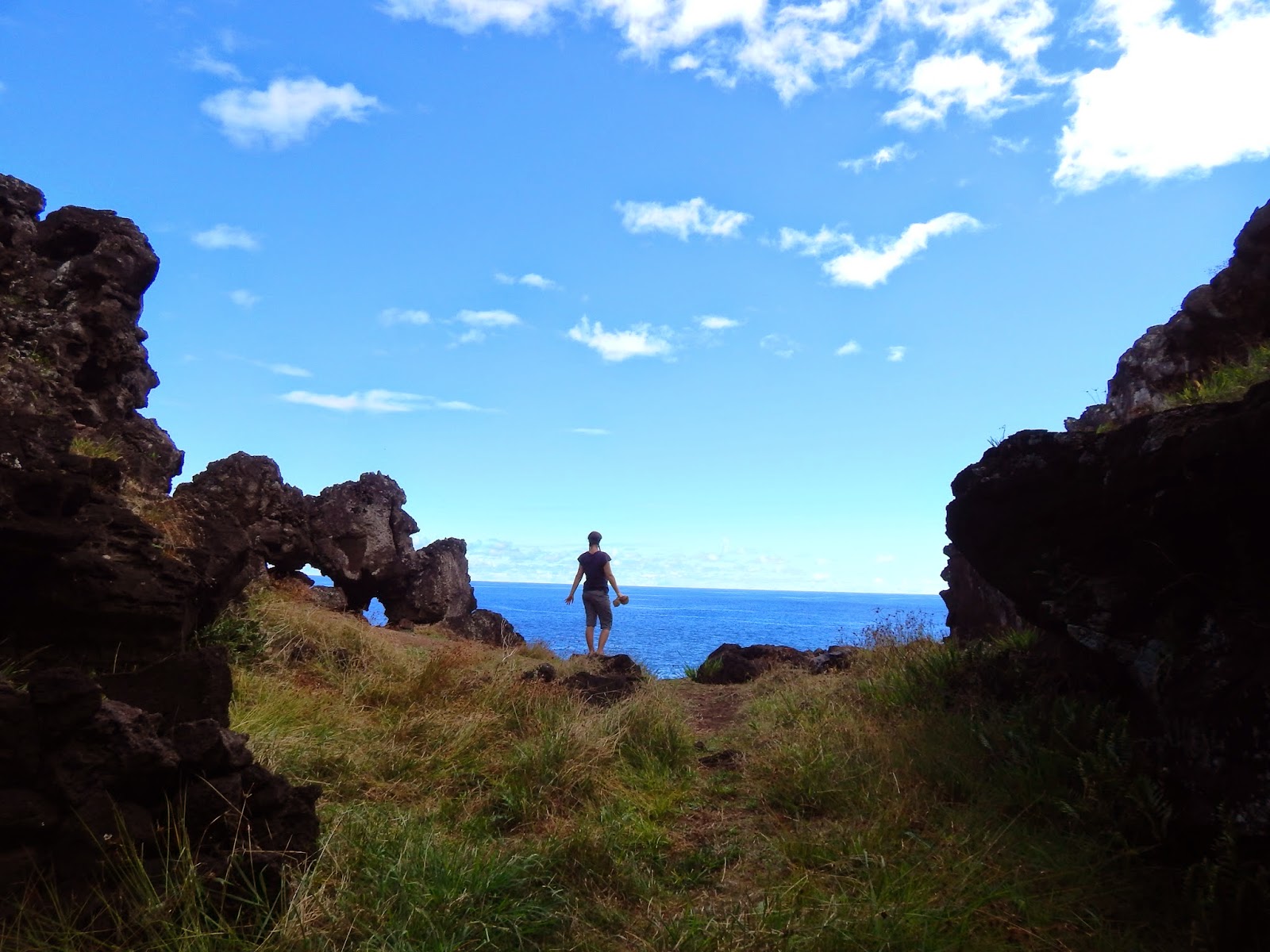 Trying to remember what still lay ahead we thought there should be one more cave. Our eyes swept back and forth across the dusty landscape for any signposts and an indication of which of the many splintering trails would most likely take us where we needed to be. The advantage of a tiny island with few trees is that it is difficult to get or stay lost. 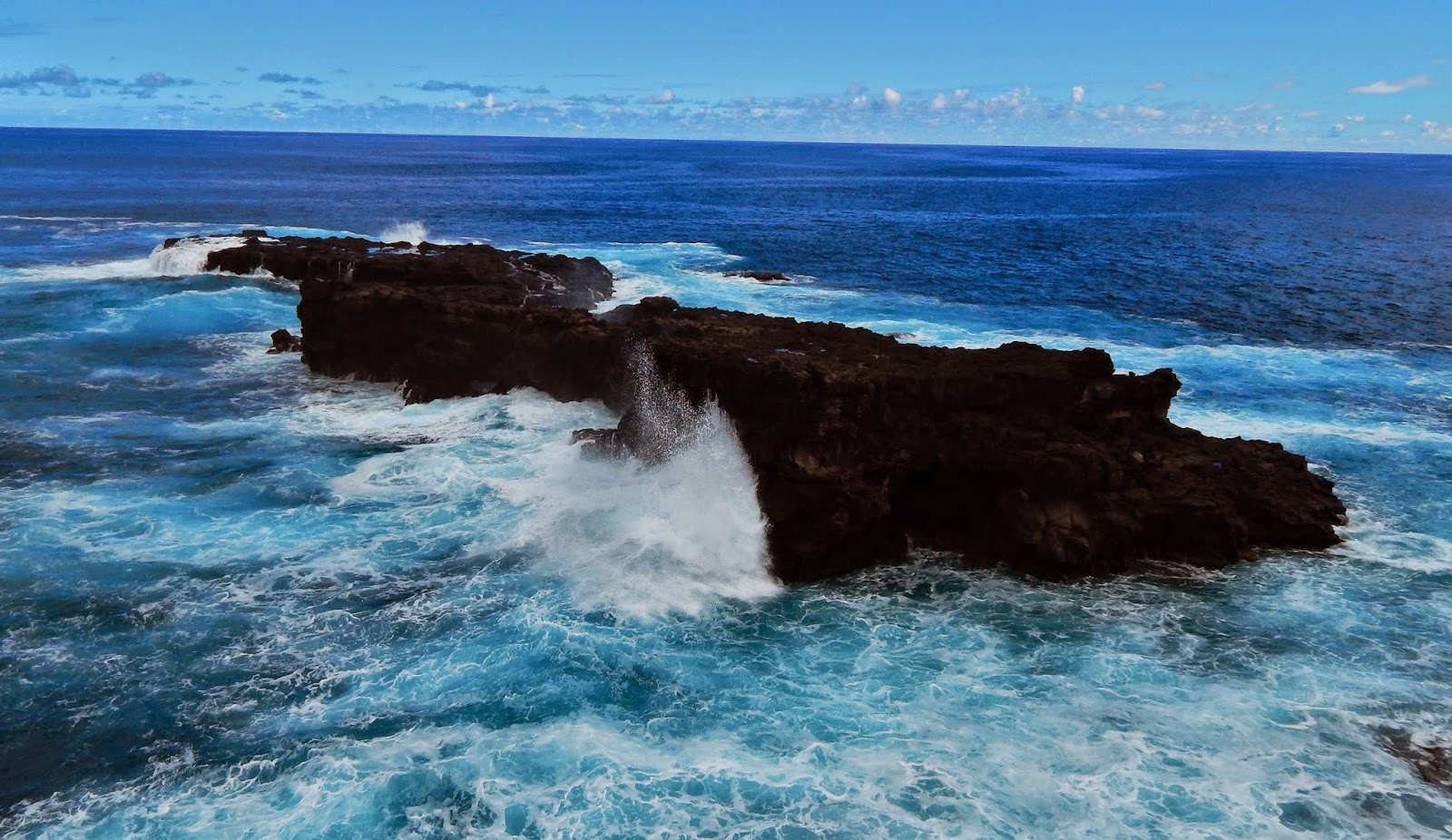 We stopped to watch the waves carve through a cavernous rock just offshore. Each wave wound its way through the core of the small island while the rest crashed against the sides. Offered a brief repose the water that had made its way into the nooks and crannies poured out in splendiferous waterfalls; different each time, and each only lasting a moment before being washed away to create a fresh canvas. 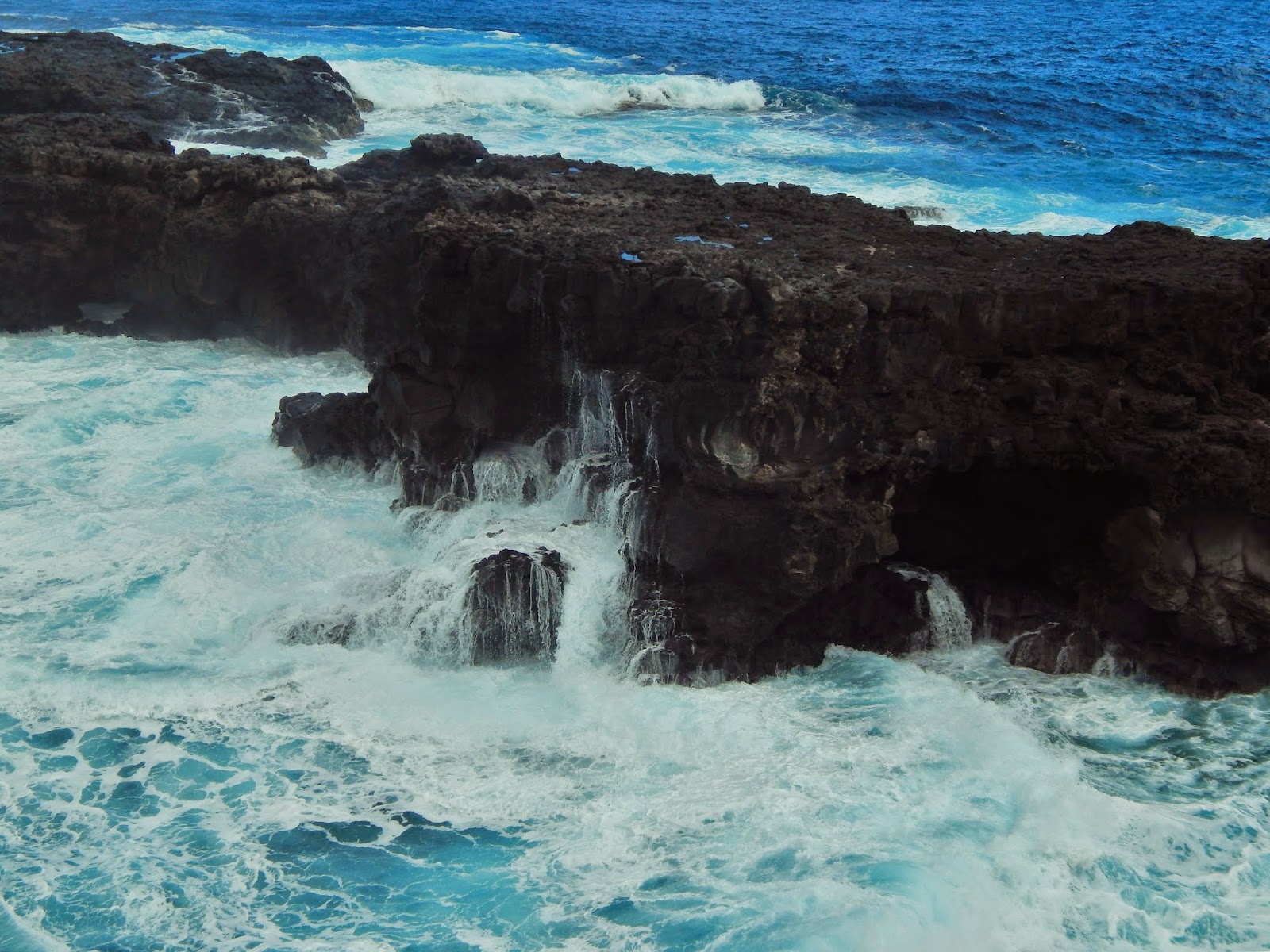 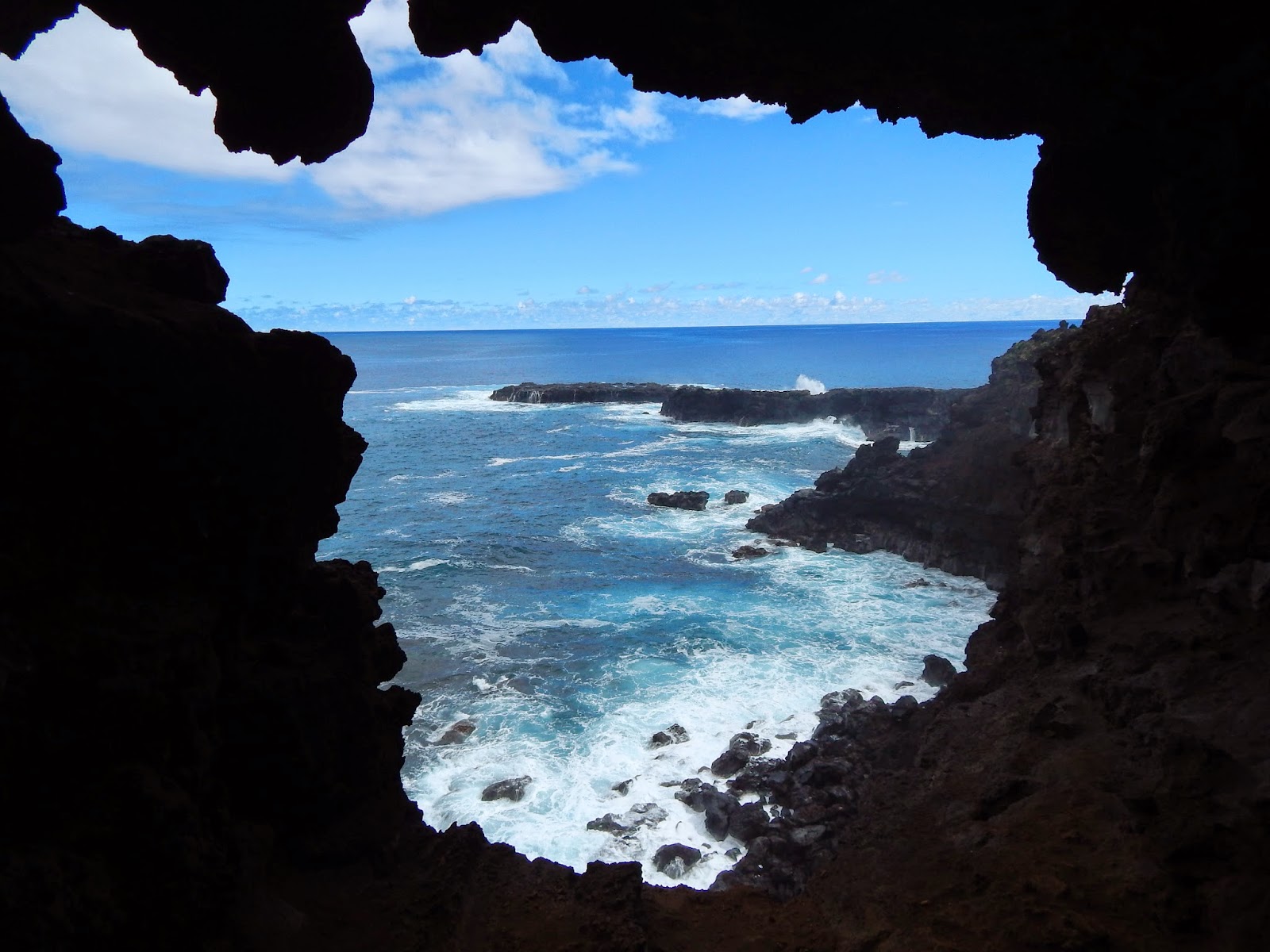 The entrance to the last cave of the day, Cave of Two Windows, was uninviting. As Craig slithered through the tiny opening his body blocked all light from his headlamp, thus his feet nervously searched for the next step. Once through and into the cave the ceiling was little more than 3 feet high (~1 m) and at times less. Every step was followed by a scan of the slippery ground for the next safe foothold, and then looking up to find the low point most likely to cause a head injury. Finally able to stand up we reached a fork where we cautiously proceeded down both small slopes to openings in the cliff that dropped into the sea. 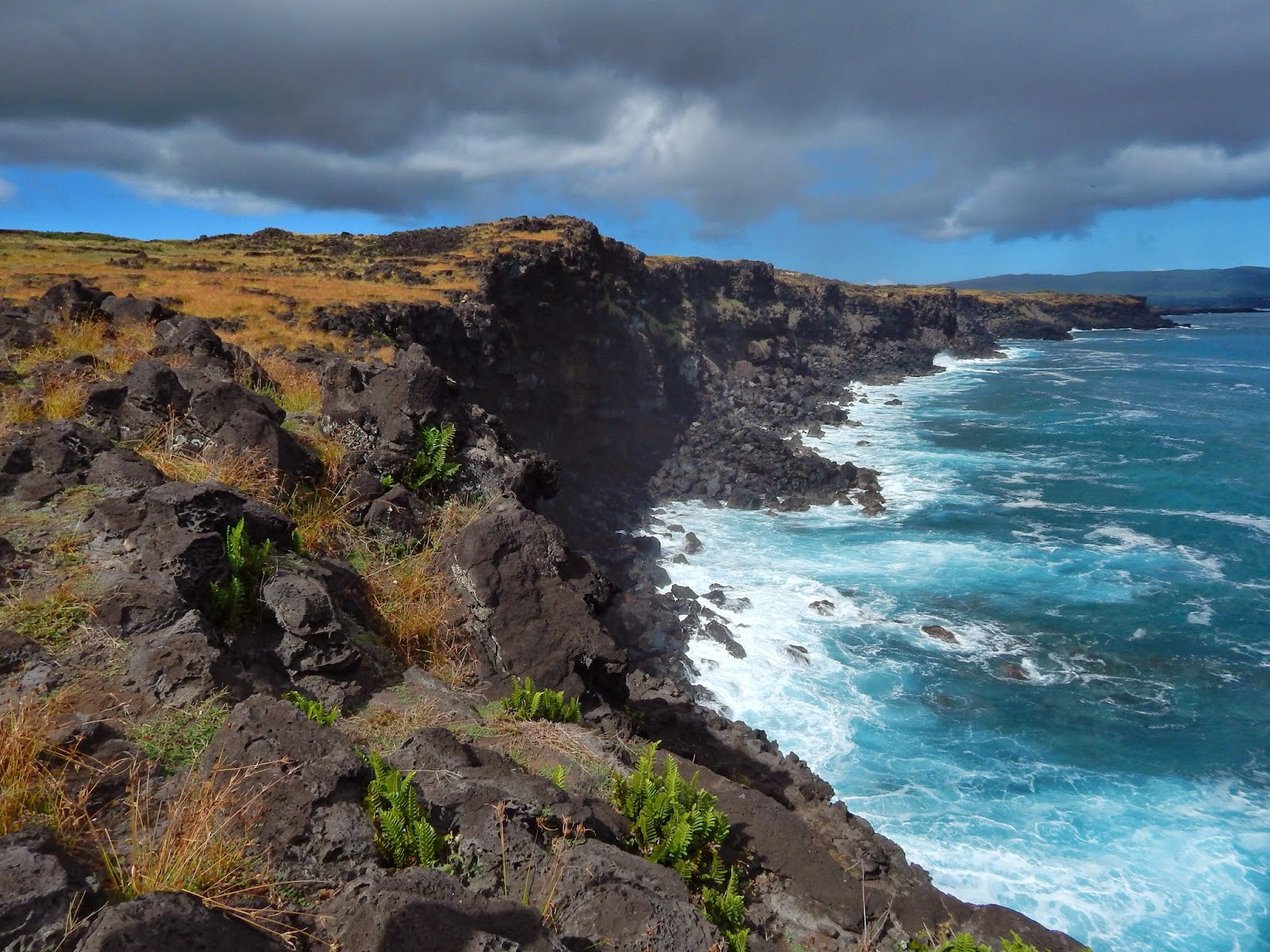 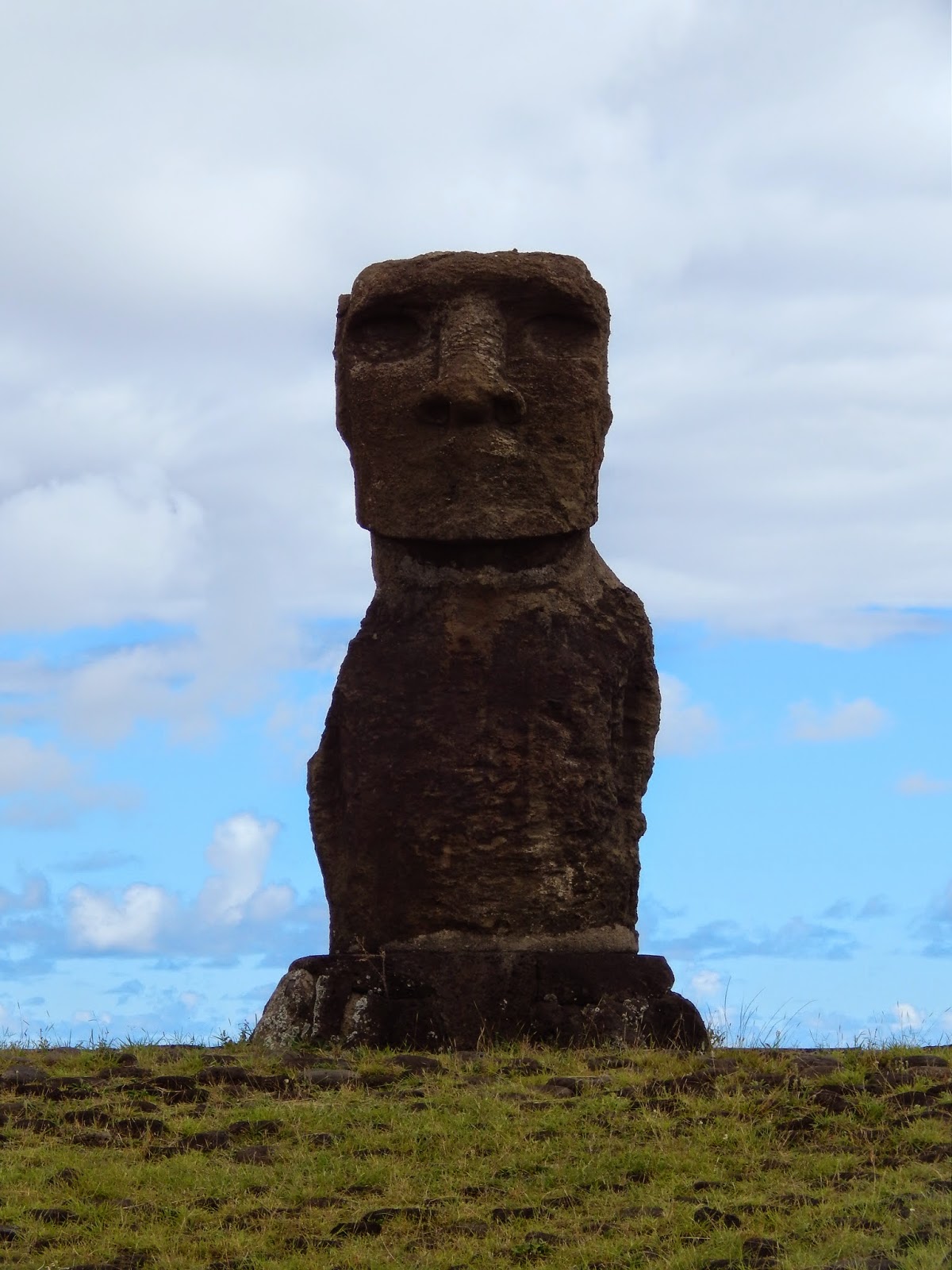 We slowly re-entered society, saying hello to those we passed, back on the road weaving between houses. Looking out over a large field, out to the sea, a row of large moai stared back at us. We had passed a few tourists on the road, but had been alone for the most part, now we were at a tourist attraction and the familiar rapid clicking of shutters challenged the roar of the tide.

Another half block brought us to the festive cemetery, coloured using a full palate and decorations. Each grave/small shrine stood as a reminder of what the person cherished most in this world, it was to look at an ancient (by technological time) precursor to facebook or myspace. Scarves of their favourite soccer team, posters for cherished memories, pictures with friends and family, and artificial flowers adorned each tomb.

Too tired from our long day to visit the museum that was put off for another day and we returned home. 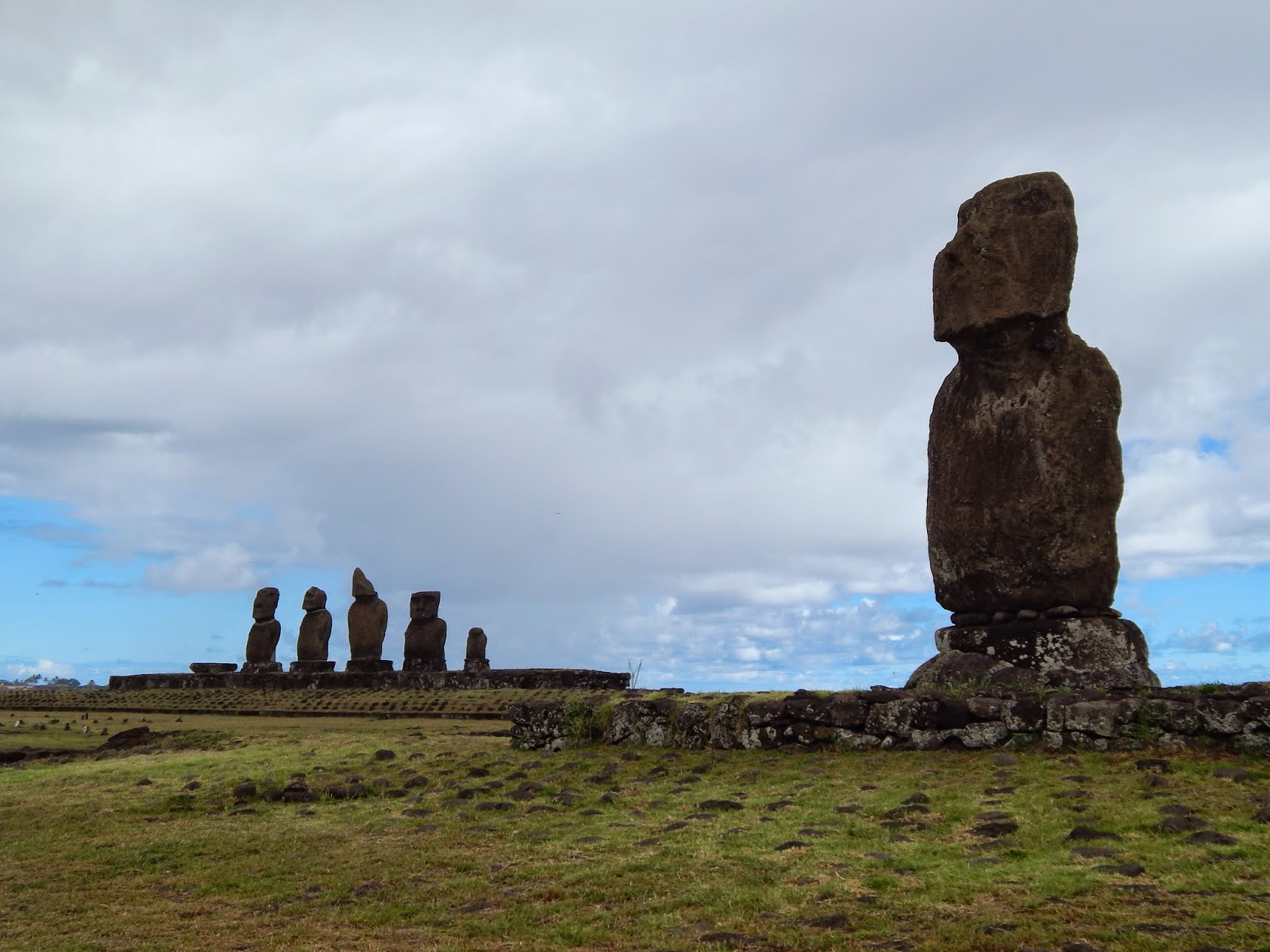 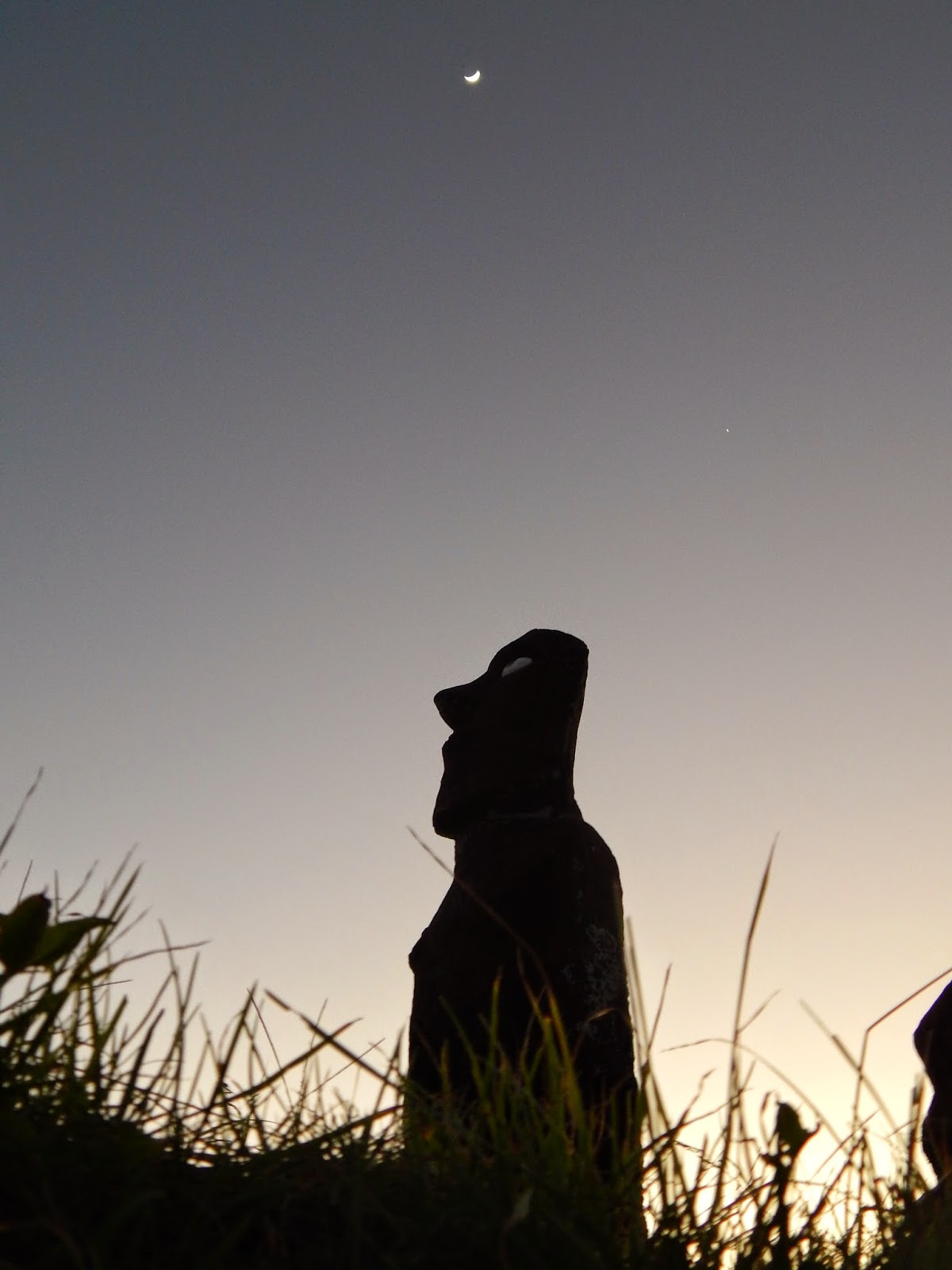 All in all, it took us roughly five and a half hours to walk the whole route and we were thankful at the end of it that we had started the day with a taxi ride as opposed to more walking.

John had tossed around the idea in Pucon that we take a week on Easter Island to detox from all the Chilean wine we'd been enjoying and we'd scoffed at his suggestion at the time. We figured we could do that after we parted ways and weren't in the presence of such great, cheap beverages. However, it was starting to appear that our time here would be booze-free as everything from liquor to potatoes was twice the price of Santiago (or home), and our level of activity necessitated early mornings and thus good nights' sleeps. If only we had the money to make something more than plain rice sans meat or vegetables, then we'd likely be feeling the healthiest of the whole trip! 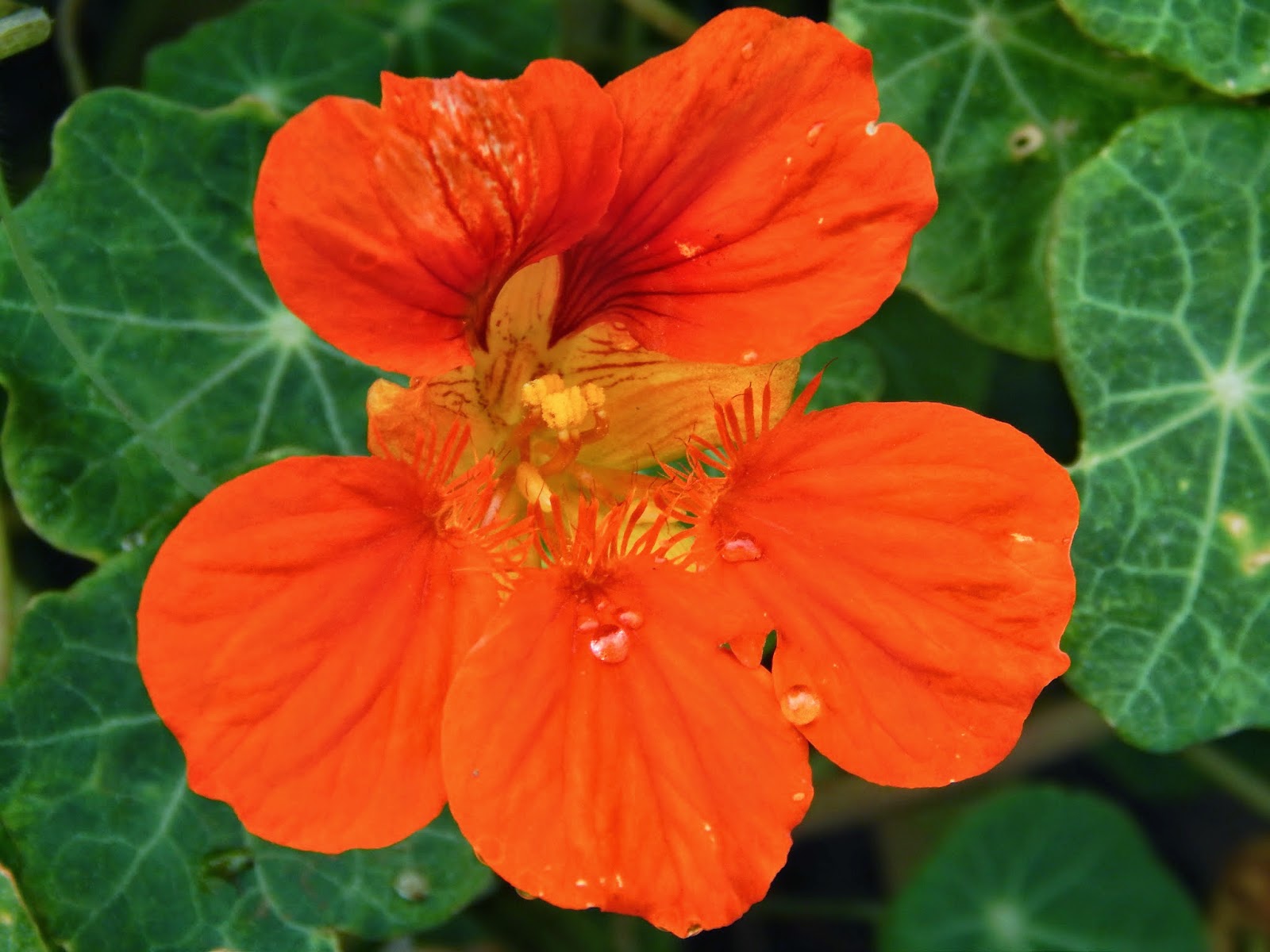