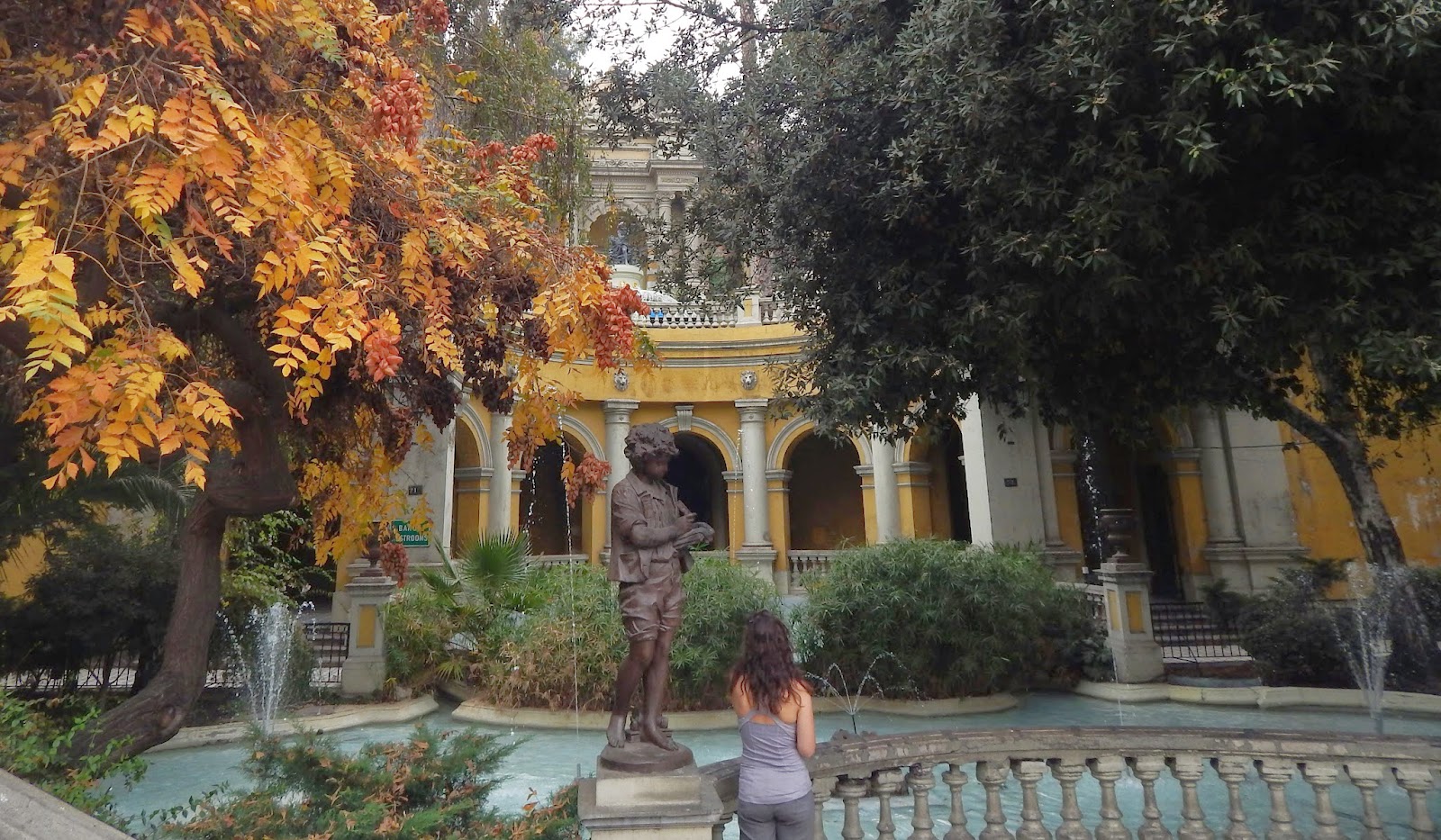 After the previous day's heavy museum, we stepped outside for a breath of fresh air and a climb to one of Santiago's higher hills, Cerro Santa Lucia. It was, unfortunately, another overcast day, but that helped quell the heat nonetheless.

We strolled through the empty streets, past grand churches, and easily found ourselves at Santa Lucia's base. Easter in Santiago isn't as huge of a production as it is in other Latin American countries; there were no big processions to attend. Easter Friday is generally a quiet day spent with family, so businesses were all shut and some families were also completing the climb. 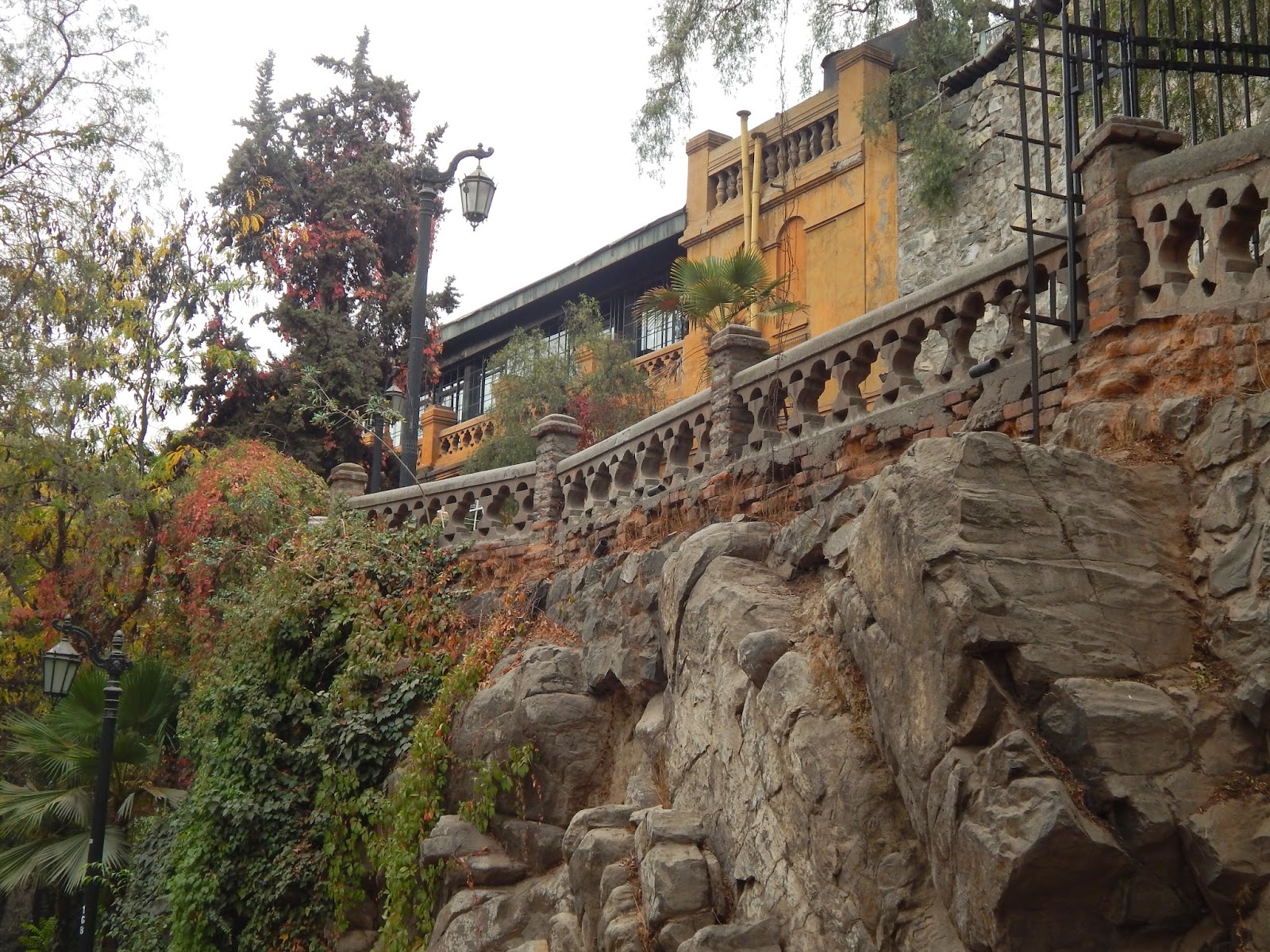 Cobblestone pathways led upwards to various parks and viewpoints. It was a bit overdone (a small circular area with a tiny fountain was labelled the "Circular Garden"), and certainly still had a city feel to it, but it was nice to be outside and get some exercise. We wound our way through ivy-covered gateways up to the top of a castle built into the rock.

The view from the top showed us a side of the city we hadn't yet seen or explored. We returned via a different route, our feet slipping on the worn rock stairs, past a small chapel and statue. We circled the base and discovered a street market with a few open stalls to wander through. 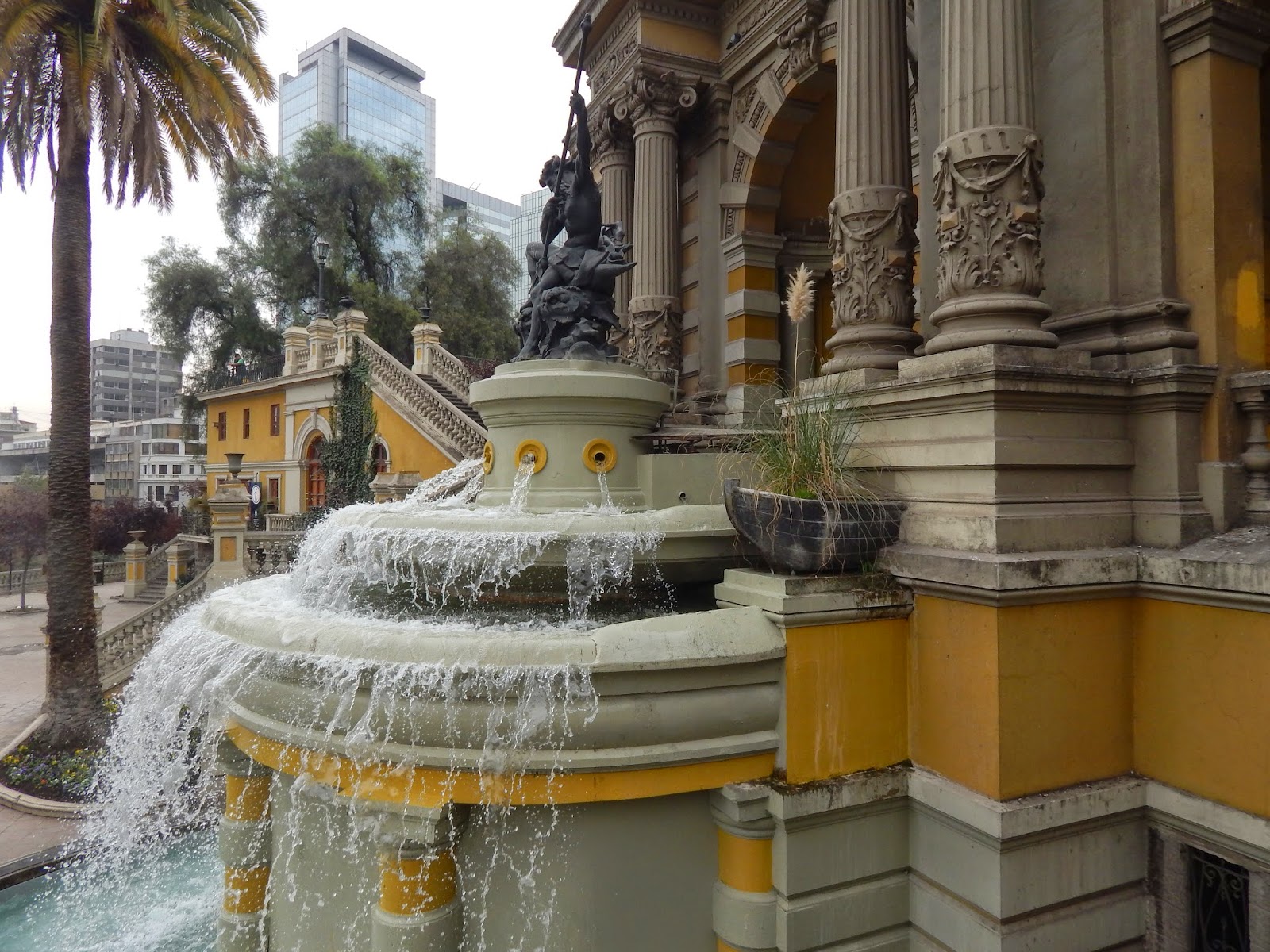 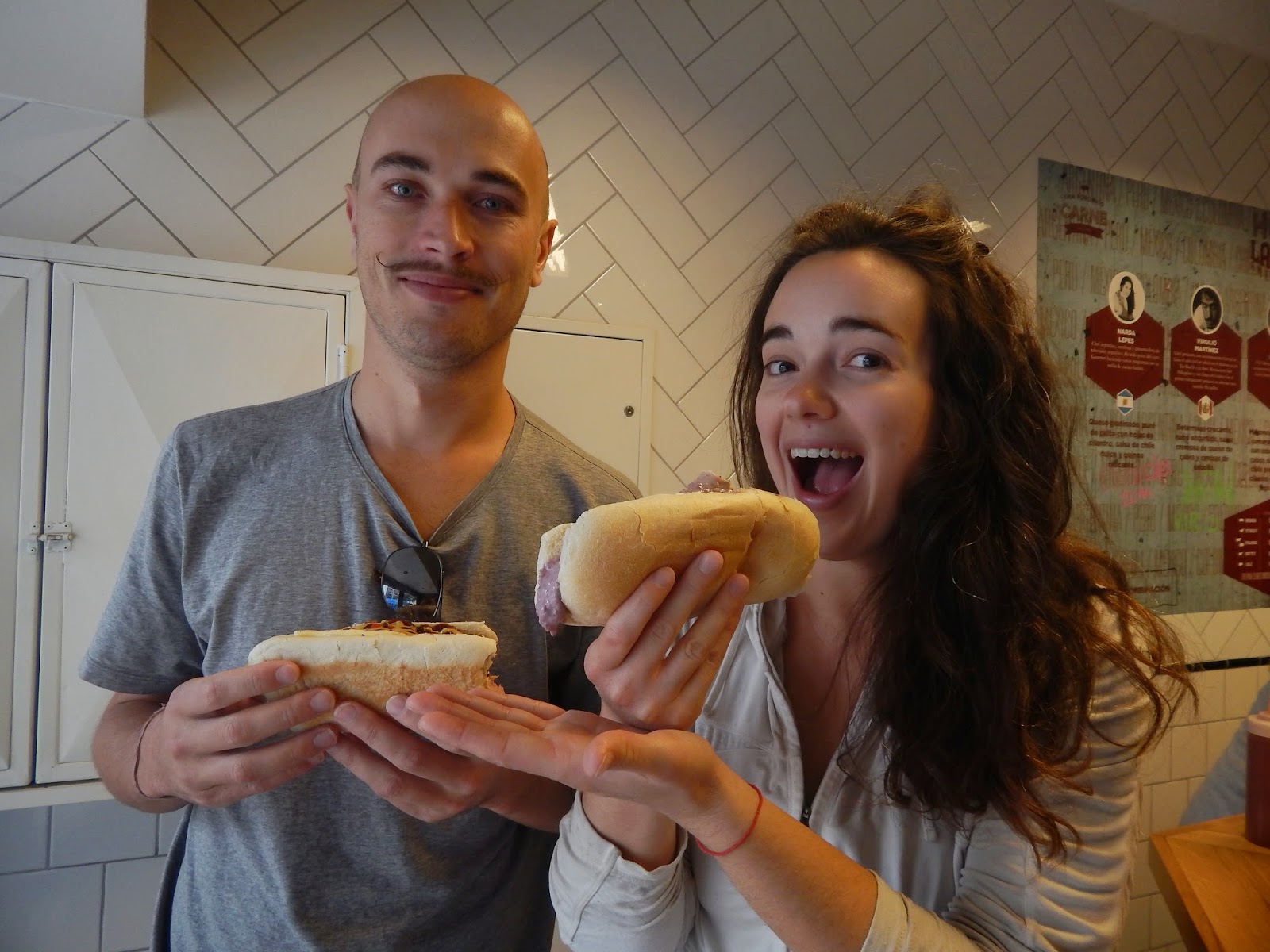 We decided to return home via Barrio Lastarria. Chic patios enticed us but we knew we couldn't afford their pisco and ceviche prices, so we continued onwards until we discovered a salchicaria (hot dog shop) that was open. With hot dogs being a big thing in Santiago, we felt it a necessary cultural experience (we're still choosing our opportunity for the other Santiago cultural experience: stand-up coffee cafes with girls in ridiculously short dresses and heels...). The choices were ample, and we each took a lengthy amount of time scouring the menu. Once we had frankfurter in hand, we gobbled them down and continued on our way. 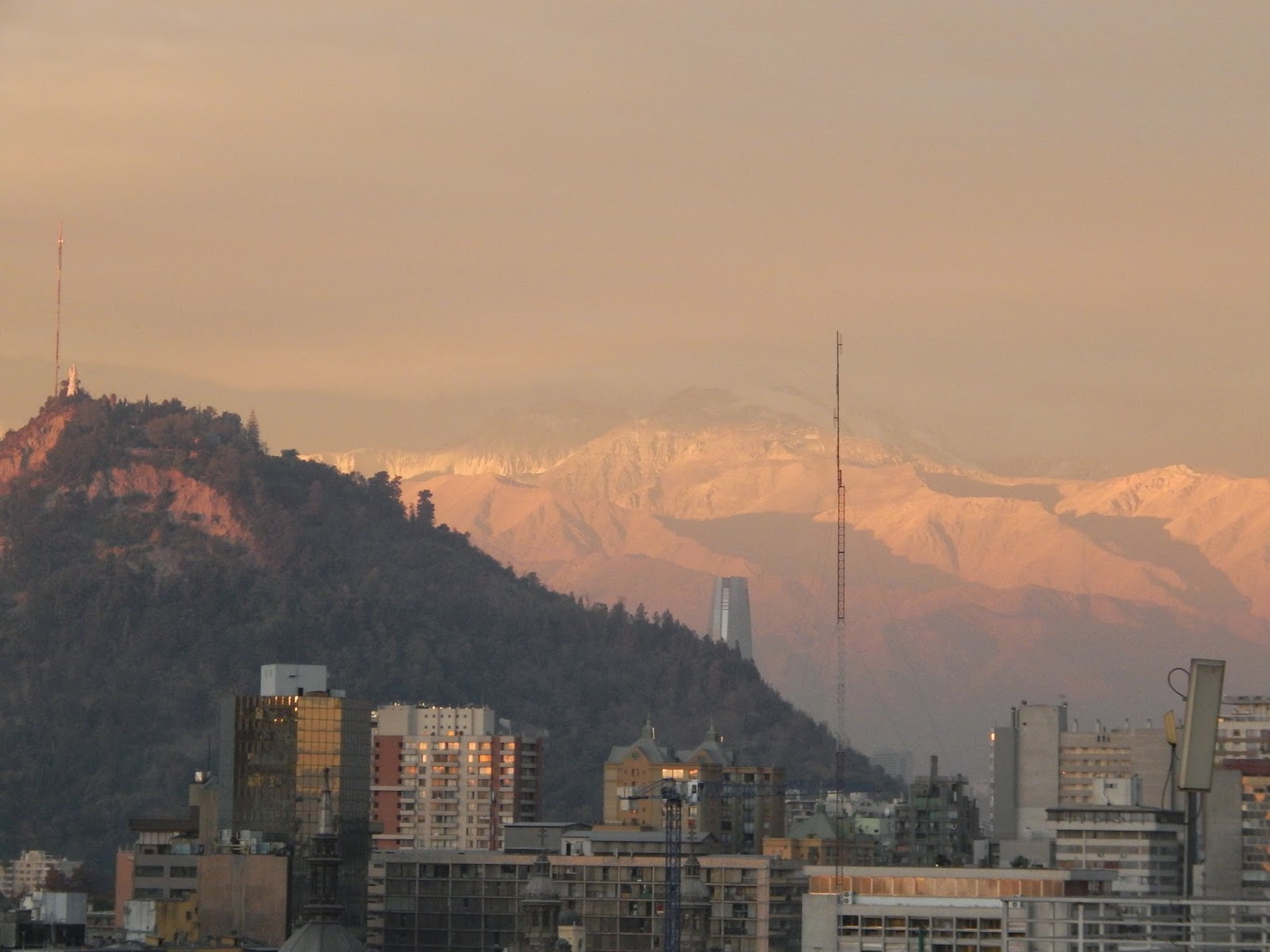 In the evening, we were treated to an outstanding sunset that showcased, for the first time, the grand Andes beside us. Perhaps they'd been hidden by sogginess due to Valparaiso's smoky fires, or just poor weather, but it was shocking to suddenly look up and realize how close these monstrous mountains are. Craig prepared a delicious dinner of salmon with a peanut-honey pesto topping in honour of Fish Friday. More wine and card games rounded out the day. 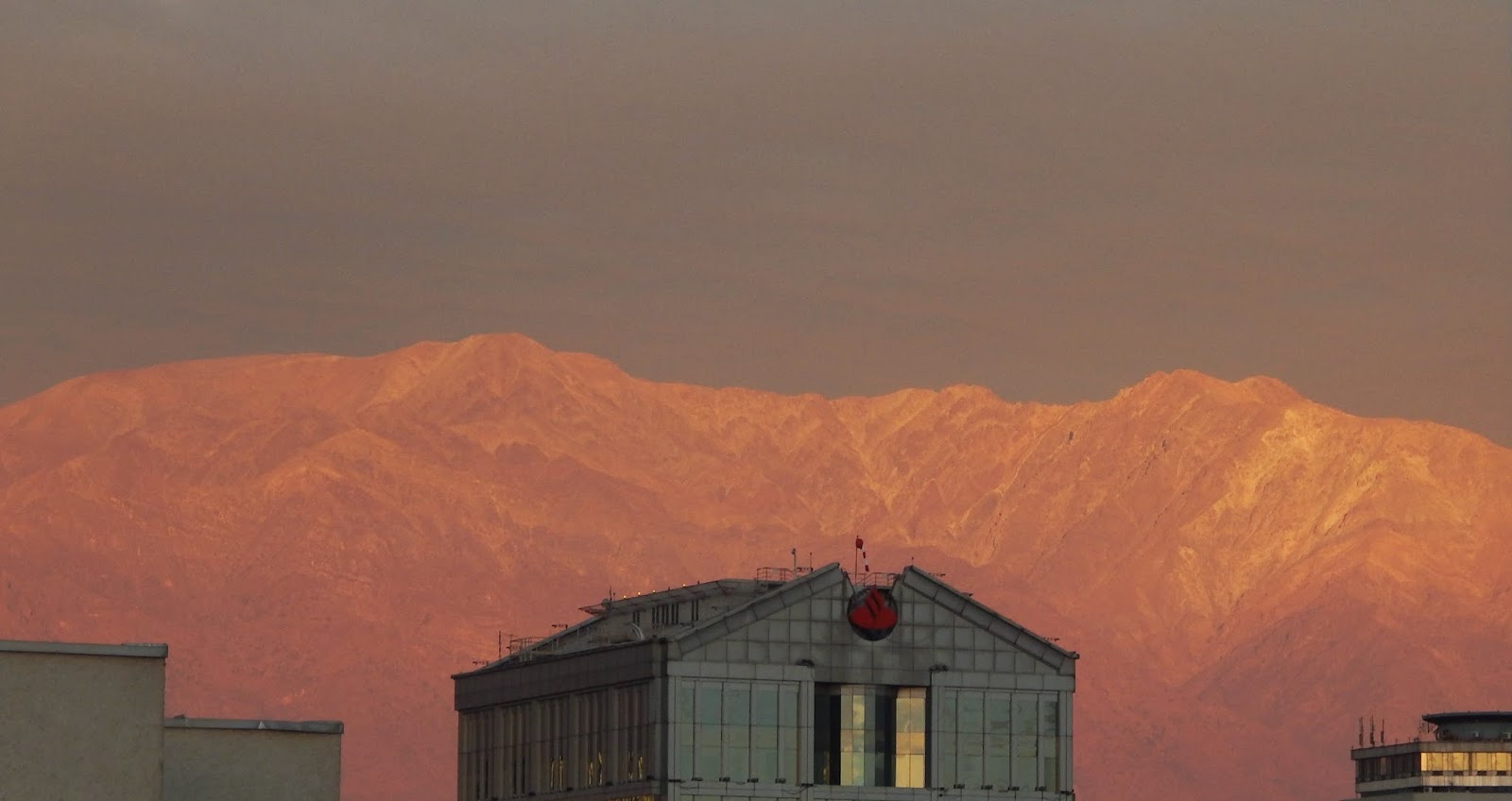