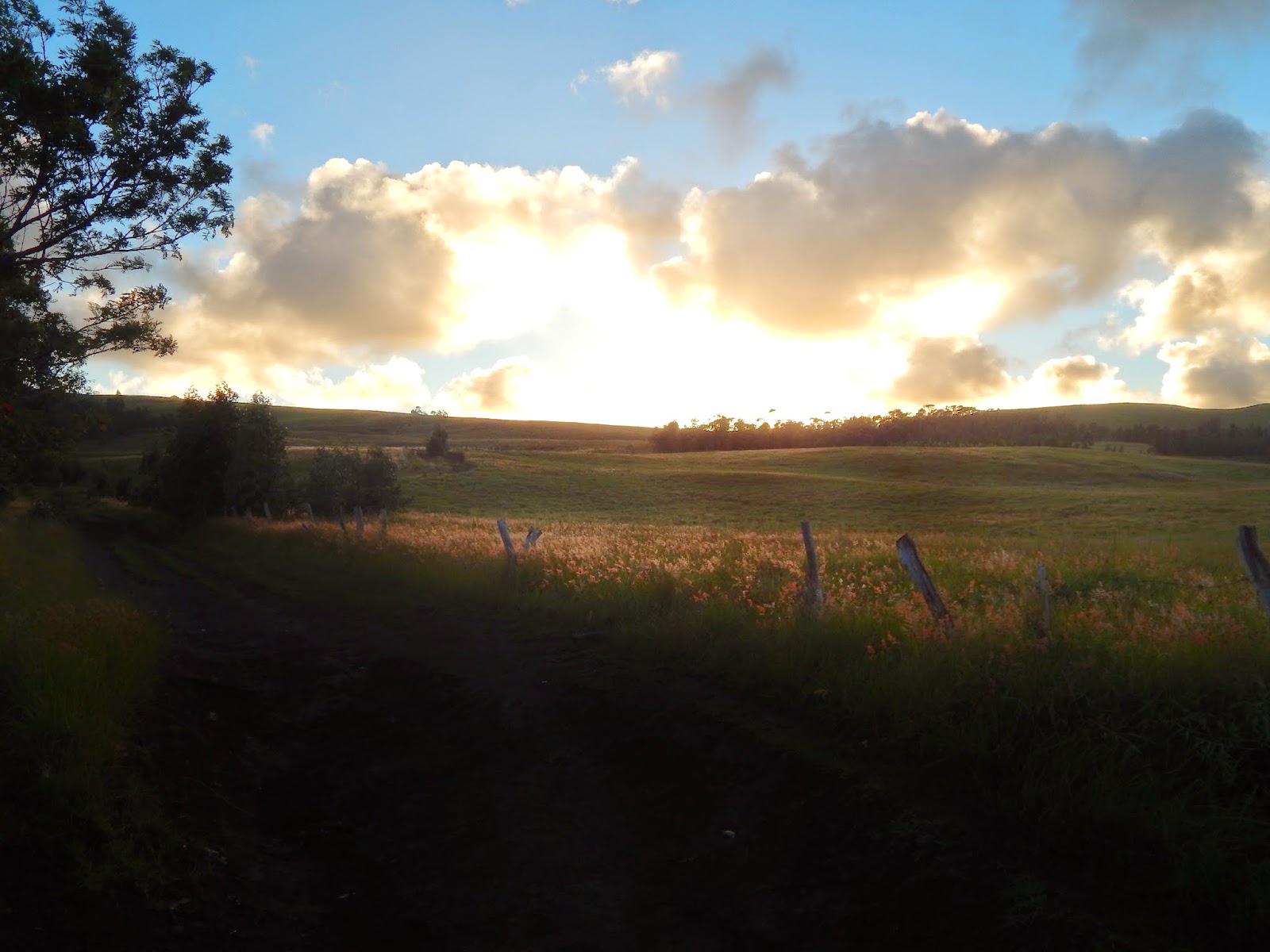 After watching the rain pour down around us both previous afternoons, we knew it was essential to wake early if we wanted a shot at panoramic views from the island's highest point. The only wrench in the plans was finding out a couple of hours before bed that the time 'might' be changing the next day. No one seemed to know for sure and our scattered internet wasn't helping much, so we set an alarm based on when we knew the sun would be rising and figured we'd wing it the next day. Even by morning, the few people we saw were confused as to what time it was. Really, it didn't matter too much to us. We walked the deserted road towards town and eventually flagged down a taxi driver picking up his morning empanadas. He took us back to Ahu Akivi via a different road, one set inland, which gave us breathtaking views of the rising sun behind the volcano we'd soon be climbing. When we reached Akivi, we were once again the only tourists around. This time; however, it was also void of grass cutters. We took in the sounds of early morning insects, an occasional horse's neigh, and the faint roar of the waves against the distant coast. 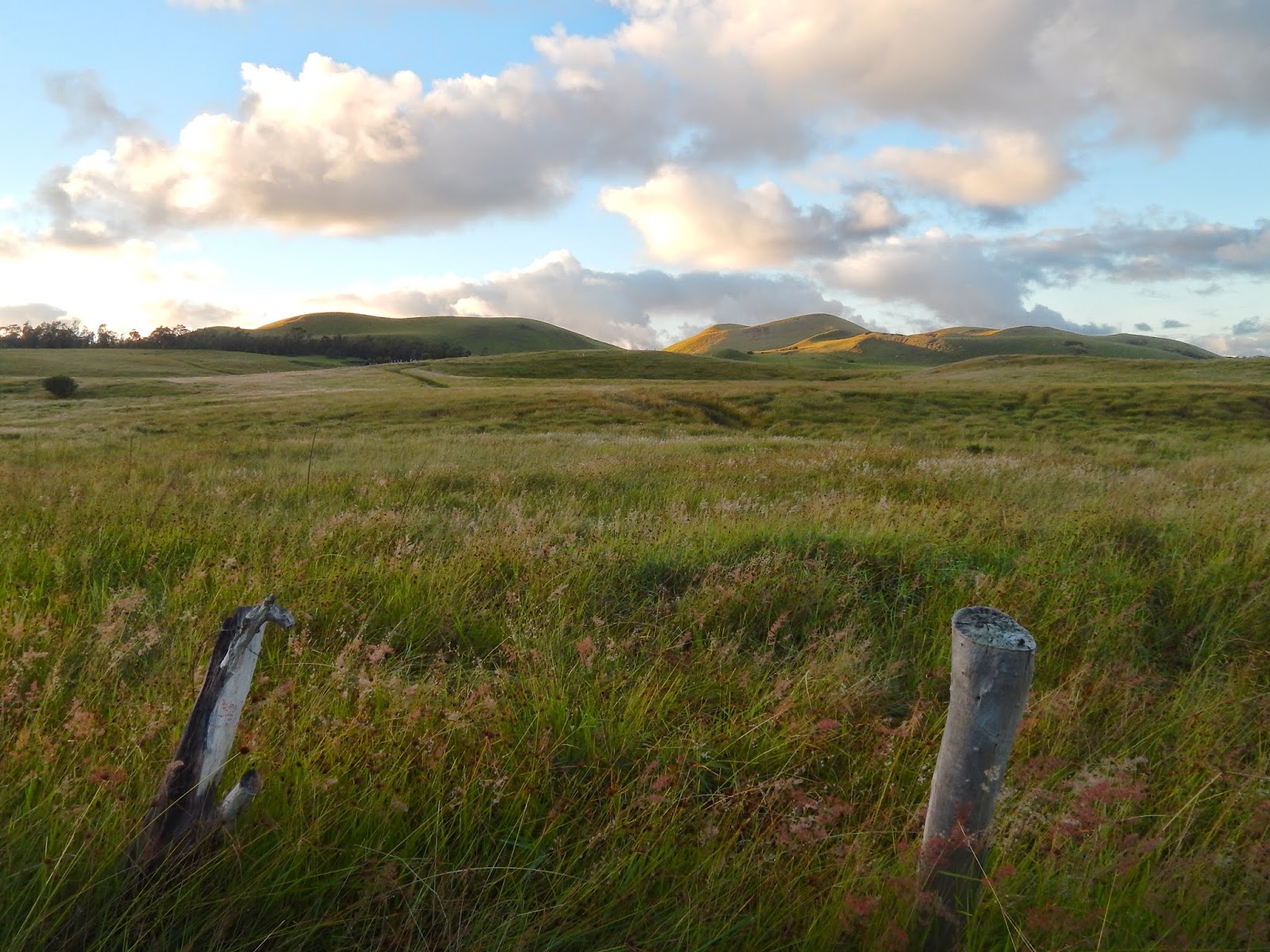 These are the only moai who face the water, but really, they're like all the others who face where the village was. Craig threw out his own theory, that they face the direction that the Polynesian settlers came from (a theory that inernetting shows he was not the first to think of).

After our fill of these regal men, we turned upwards and skirted a field along a wide dirt road. The air was just starting to warm up and the light breeze made our steady climb peaceful. Huge fluffy clouds strolled past a sky now so blue you'll swear we over-edited the photo. 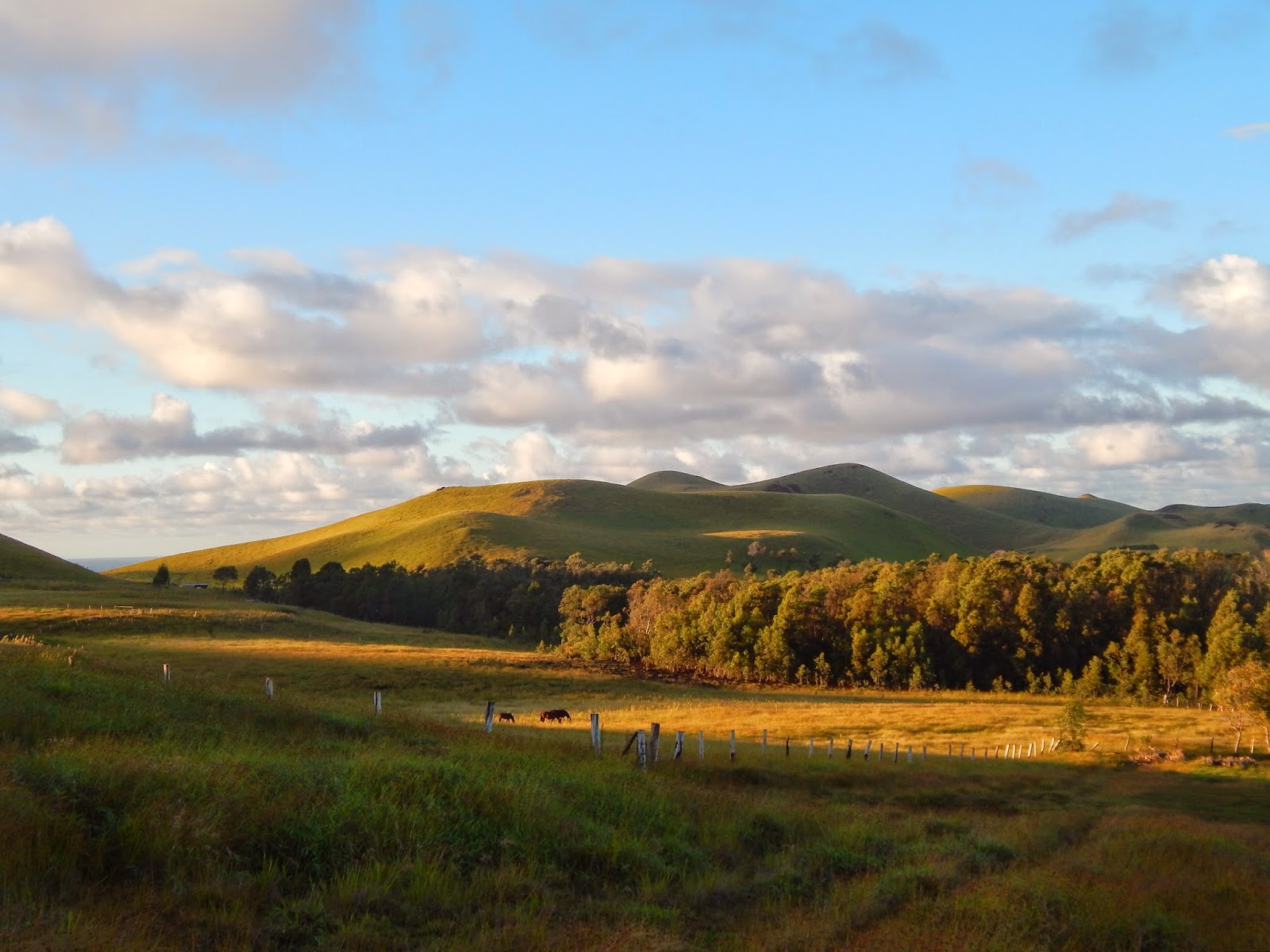 As we crested each rolling hill, we were provided with increasing views of the island, and with them, reminders of what the past six days had brought us. We were able to identify Rano Kau, where we knew Orongo perched perilously on the edge between crater and cliff, the road that led to the fallen moai from our second day's picnic. The rehabilitation area where we'd planned trees came into view next, a patch of trees just restricting a full 360° of water. Craig pointed out the top knot crater from our rental car day, and the crater lake of Rano Raraku. The beauty of hiking to the top of the island on our last day unfolded around us, each field, hill, and valley a piece in the story quilt of our visit. A wind had picked up and with it grey clouds, so it looked like we might get our morning shower a little early. And although lovely, the views from the island's peak weren't quite as spectacular as we'd hoped because it wasn't much higher than the peaks around it. So we quickly turned around and strolled down the gentle slope to the road. 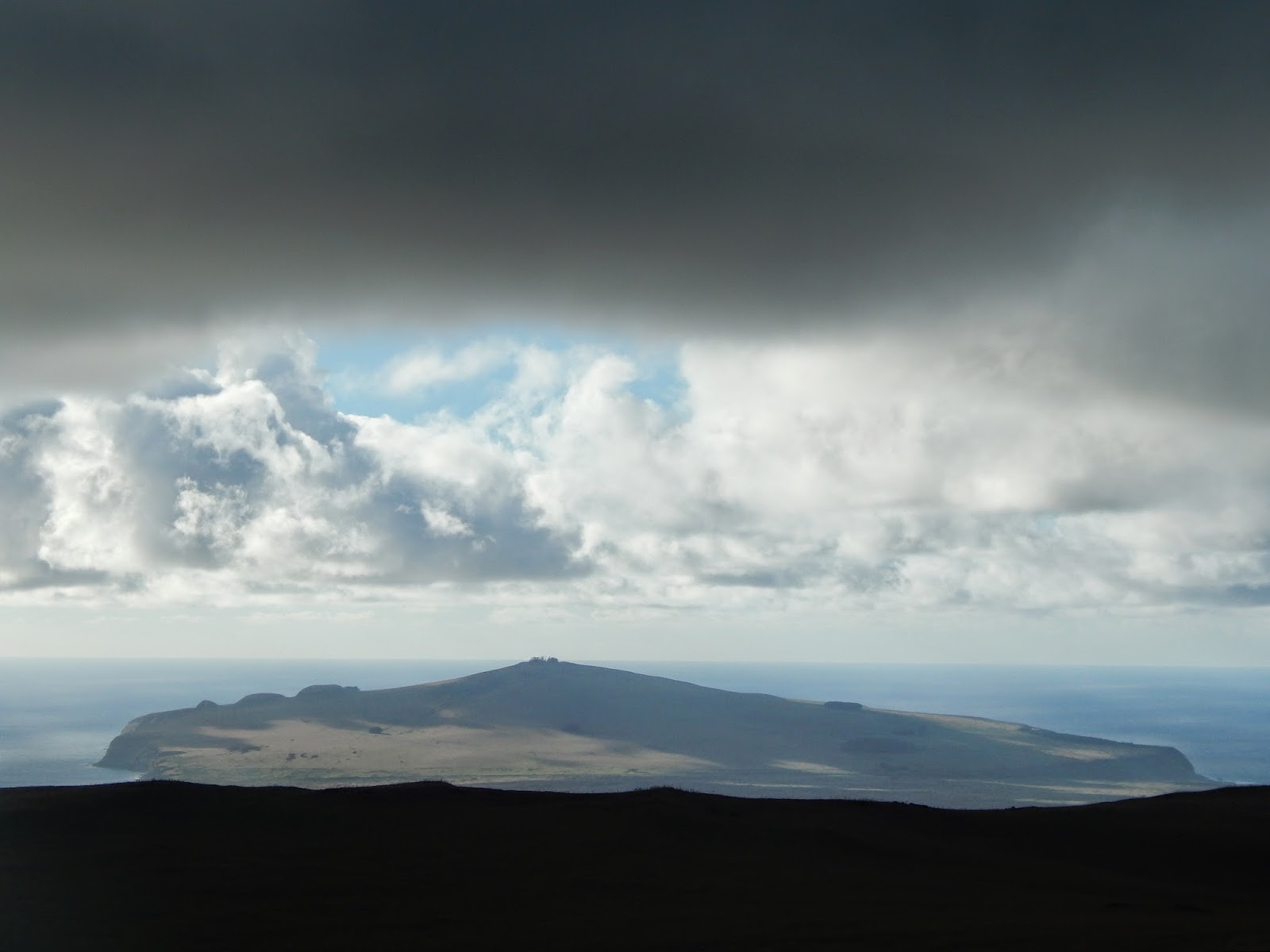 Having already explored the North Road to our fill, we opted to stick to the main street so we'd return quicker and have the option of hitchhiking if it presented itself. A very nice old man stopped us, going the opposite direction, to let us know he was on his way to Akivi in case we wanted to see the moai. We passed a few small houses and Erin was able to use her Rapa Nui for the first time (that she'd learned in the novel she was reading and wouldn't stop quoting), reciprocating the friendly call "Iorana" back to two young sisters. 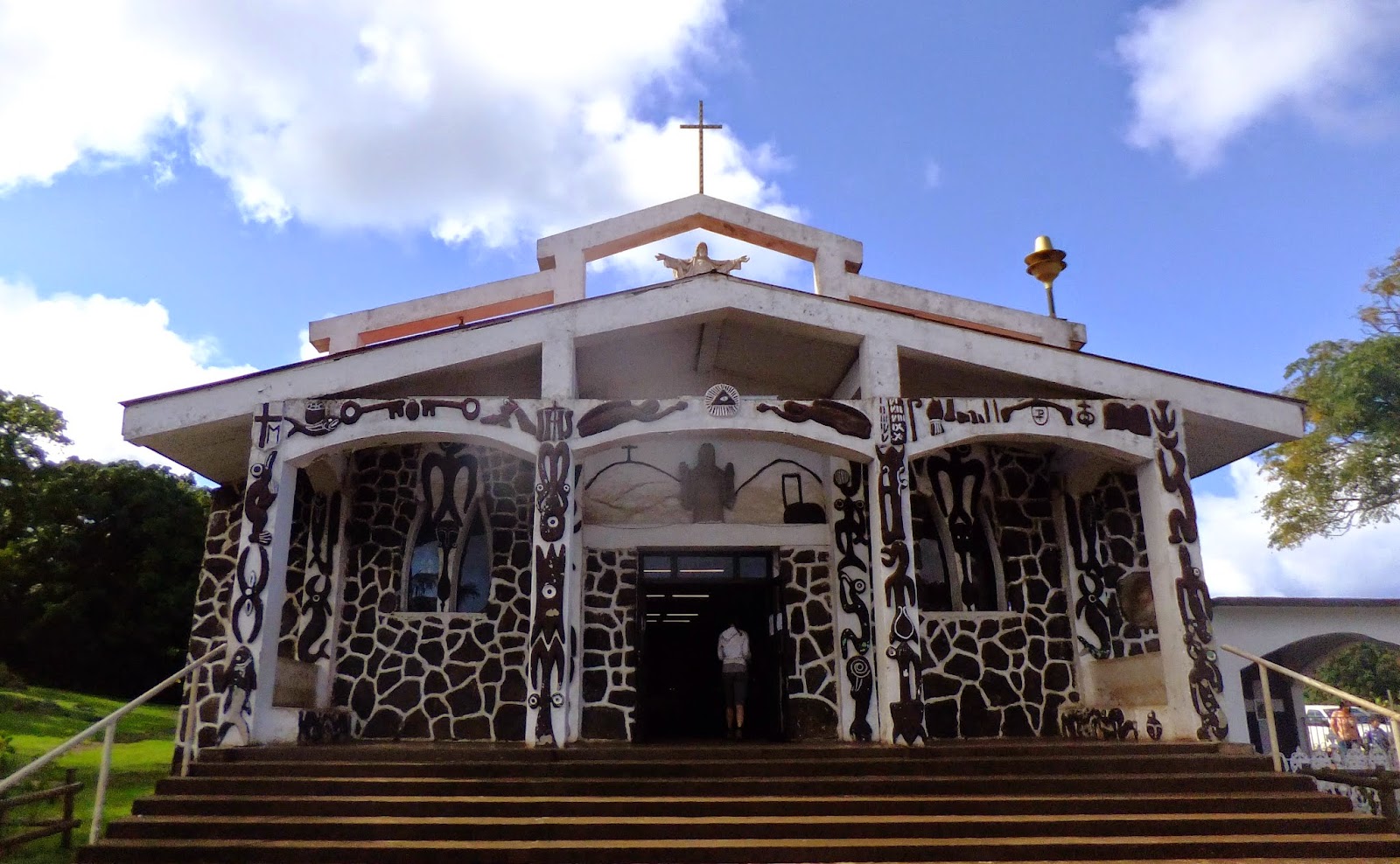 Nearing town, a man in a pick-up stopped to let us know he was going to the church, which we wanted to visit anyways, so we jumped in and shaved the last ten minutes off our hike, for which our feet were thankful. A quick peek inside told us we'd unfortunately missed the lively Rapa Nui service that morning and instead it was a regular Catholic service in Spanish.

After lunch and an afternoon's rest, we circled the coast with Kristen and John intent on a special farewell dinner at our seafood restaurant from Day One. We arrived to discover it was closed on Sundays so after checking out a few other options, we went our separate ways and cooked at home.