Day 80: Trekking to the Top 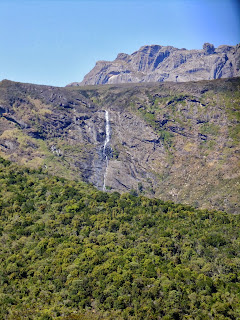 We set out on what was to be a two night, three day trek covering 36 km, and climbing to the top of the second highest peak in Madagascar. The plan was to depart from the Namoly Valley hiking for 12 km to reach the camp closest to the summit on the first day. On the second, we would summit and then return to camp, pack, eat, and then continue over a mountain pass to another camp, 16km in total. The third day would be a steep descent into the Tsarnoro Valley which would be roughly 8km. 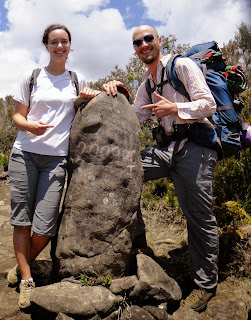 Leaving from our hotel at 7am we set down a small path leading through small communities and through farmland before reaching the park boundary. The trail bobbed up and down over hills and into small river valleys. The break that the downhills provided was overshadowed by the fact that we had to go to the highest point in Southern Madagascar, thus each step down was one in the wrong direction. Craig made the decision to carry his large bag for the first day as his little bag is not comfortable with a heavy load in it. And seeing as how we needed food, water, and camping supplies for three days, along with everything for our whole trip he knew both would be heavy. Craig lagged behind on the steep climbs but he made it all the same.

After 8 km or so we reached the plateau along the mountainous rock wall. The hike was now easier and the views were constant and amazing. We stopped at a bog/swimming hole where we decided that we were fine being sweaty and warm, thus avoiding a swim, and ate lunch. From there it was a short hike to the camp across level plains, and we spent the afternoon enjoying the amazing setting and hoping that the thunderstorm over the hills was headed in a different direction. 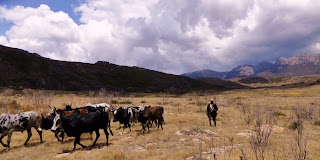 We ate with hail pounding against the roof and slept on the hard ground with rain pounding into the sides of the tent. Sleeping was almost impossible with the sky constantly lighting up as if it was full daylight thanks to the 7 hour thunderstorm, and the wind pushing the tent sides into our already huddled bodies due to the extremely small tent. When Erin finally gave up on sleep at 1:30 am, she got out to see the most spectacular display of stars she had ever seen! She quickly called Craig out and they stood mesmerized watching shooting stars streak above them.
Posted by Craig & Erin at 3:23 AM