We woke up and headed off to the port to once again try to make our way south along the coast to Anako. Following a lengthy wait in the heat, watching the tide roll out until the sea was half a kilometer away, we hopped into the back of a zebu cart with our bags. It was a bumpy, depressing ride as the zebu were poorly treated and on a school day, it was children that were driving the carts. The speed boat journey was far more pleasant.

With the tide still out, we got dropped off in knee high water as there was not a safe place to approach the beach. Thus we were weaving or way through seaweed, rocks and probably sea urchins with our bags and passports/electronics/things ruinable by water. The owner of our hotel "Peter Pan", Dario came out to meet us with a staff member to help with the bags. Dario, it seems had modelled himself after the namesake of his establishment. His hair resembled that of a young Pan or Rufio's minus the stripes, he often wore a very short sleeved, v necked shirt that was just the right green, and had a habit of placing his fists on his hips. He had also thrown in a few of his own touches such as eye liner, and long pointed blue fingernails on his right hand. 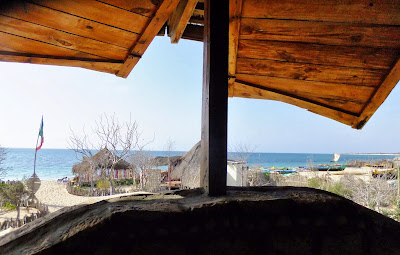 The place had a Lost Boys feel to it as well, our beautiful hut had a second floor loft with a couch and a bed looking out on the sand below and the sea beyond. The shutters operated by a pulley system, so by pulling on a rope the bottom of the shutter would be lifted up/outward to the roof, and then one would have to tie the rope around a support beam.

Anakao itself is a bustling fishing village along a long stretch of beautiful beach sheltered by the barrier reef and islands offshore. We found it to lack a few of the charms of Ramena, as it was busier, more aggressive in offerings and demands, more touristy while lacking in restaurants etc, and children that were not in school crowded the beach. *It is possible that they did attend school, as we learned that for many schools the primary students go for a half day and the secondary for the opposite half.

We had a relaxing two days in the sun, sipping drinks at another restaurant down the beach that let us use their umbrellas and chairs in the sand. Erin badly smashed her left foot on the lip heading into the tiled bathroom, so our walks down the beach were impeded. Craig upped his killed cockroach count, and despite the eccentric ambience, Dario's restaurant boasted an authentic Italian menu which we thoroughly enjoyed! we also treated ourselves to our first 'real' bottle of wine - an Argentinian white that was even chilled! 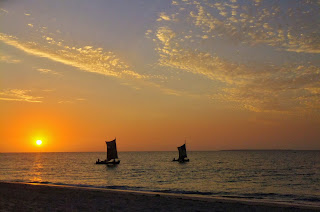 One of the big highlights was watching the sun set straight into the ocean, watching intently for the 'green flash,' then turning around to watch the full moon rise amidst beautiful pink clouds.