Day 76: Journey to the End of the World 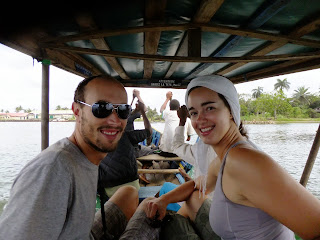 We slept well and woke with the mindset to relax for a large part of the day. But we quickly ran into Heather and John who were moving into our hotel after braving two nights at Sidi. They had arranged a half-day pirogue tour (a wide dugout canoe with a roof) of the nearby canals. So we crashed their tour and were introduced to Ignace, the local expert guide and his crew.

We saw great views of the fisherman coming back from their morning at sea, their tiny pirogues bobbing and disappearing behind every mammoth wave. Next was a trip down the slender canals where we spotted the beautifully iridescent kingfisher. 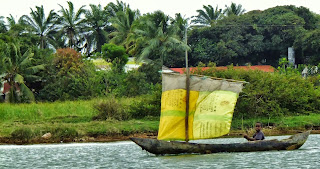 We visited the rebellion monument for the 29 de mars and the foreign cemetery. Ignace tirelessly pointed out plants and sites with the passion of a schoolteacher preparing his students for a grand quiz. We observed the making of essential oils from eucalyptus and lemongrass, tasted honey made from lychee, and learned the basics of vanilla harvesting. Our last stop might have been the coolest - a carnivorous plant new to us both. 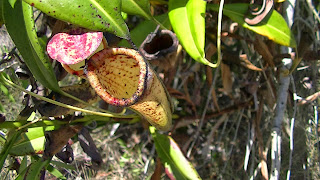 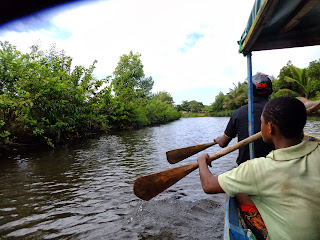 The oarsmen worked hard but it was still late when we got back to Manakara Be for lunch. We wanted to explore the Lonely Planet's top pick but had to find a way out to the secluded hotel 8km down the peninsula. Pousse-pousses were out - too much sand, we were told. So we finally negotiated ourselves a very lengthy moto-taxi ride that involved lots of hopping in and out and a fair amount of pushing for Craig and John. 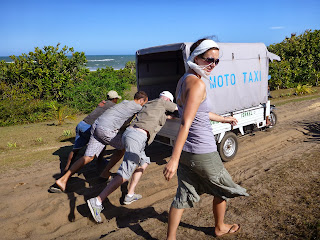 In the end, the restaurant was rough around the edges and the 'beach as your bathroom' left a little to be desired, but our brief walk along the coast showcased the reasoning for this being one of their End-of-the-World locations. 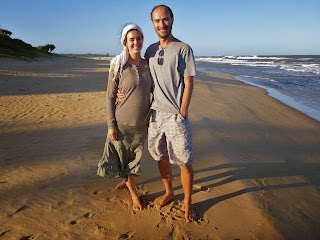 We went to bed excited by the next day's travel thanks to our growing caravan. With Chloe and Peter, two Europeans we meet on the train ride joining our crew, we'd arranged a private brousse ride to take us the 8 hours the next day.
Posted by Craig & Erin at 9:23 AM