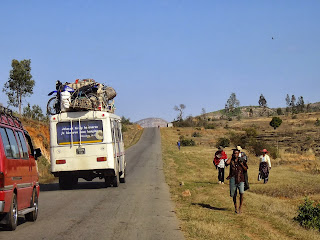 We were still giddy the next morning for our drive out of the Tsarnoro Valley. Heather and John made the trip more affordable, but it was still a pricey transfer. We arrived in Isalo for lunch and were intrigued to see the rooms Lonely Planet had described so eccentrically. It appeared that we were staying in a castle with rock walls and an arched doorway. The bathroom had hooks made of zebu horns and we had a mural that lit up behind the headboard. The grounds were a tangle of plants and flowers and penned geese acted as an alarm system, honking anytime someone walked by.

We met Berny, the hotel's namesake, and he offered us a shot of his homemade rum as a digestive-ginger for Craig, pepper for John, and chocolate for the ladies - Berny's choices. In the afternoon we headed over to one of the star hotels outside of town, le Relais de la Reine to use their internet and have dinner. We managed to Skype with everyone in our immediate families to tell them the great news!

Leaving the hotel we had some trouble because it appeared that our taxi driver had stranded us. In the midst of us trying to arrange for a transfer back to town he reappeared, frantically telling us that it wasn't his fault; he was helping out with the fire. As we drove towards the village we could see he was telling the truth. A red glow filled the sky from nearly a kilometer away. Flames ripped across the dry grass threatening to wipe out the entire park, and with it the livelihood of the south-central Malagasy, not to mention the animals. Villagers bat at the flames with branches or poured stream water from buckets. For the most-visited park in Madagascar they had little tools or preparation for such a disaster. Our driver ranted about arson, and it certainly looked that was from the ring of fire. 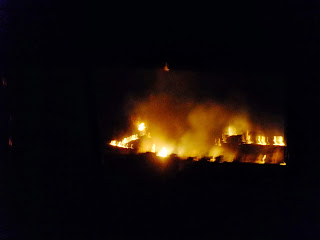 Back in town, people seemed unaware or simply unalarmed. We warned Heather and John, made sure our bags were packed, and headed to bed, because there wasn't much else to do. Surprisingly, we woke in the morning to most people not even knowing it had happened, and those who had, reassured us breezily that everything was fine. So by 7:30 am we were on our way out hiking.
Posted by Craig & Erin at 5:13 AM