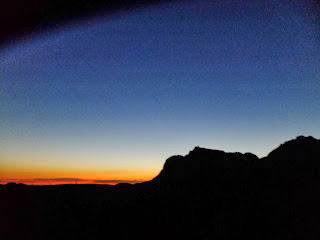 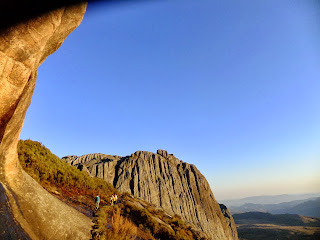 It was a mere few hours before we "awoke" to leave for 4am, and were pleased to see that the sky was still completely clear. With flashlights searching for the path in front of us, we headed out, quickly coming to a point where we needed to cross a small creek that was now swollen to the point that the stones which were to act as our path were submerged. Getting only mildly wet we continued up the mountain along an impressive cliff and watched the sun rise over the plateau below. 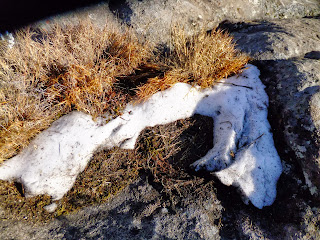 John and Heather were accompanying us on the hike, and it was after 1.5 hours that John checked his GPS, we were only 150 metres below the summit; we felt we had to be close. We then of course descended hundreds of metres as we crested and then descend through a pass. Now we could finally see Pic Boby in front of us. It was a quick steep climb to the summit. Just before reaching it our guide informed us of the traditional cheer given at the top to 'open the heavens'.

At the peak we got a view back to our starting point the day before and our first view of the Tsarnoro Valley, our destination. We celebrated quietly, each finding our own spot to sit and reflect across the surrounding peaks. We browsed the notes left in the box under the cairn and Craig added his band-aid wrapper as he would not have made it without the bandage protecting a blister. We probably could've spent much more time soaking in the views, but the thought of what still lay before us loomed. We made excellent time on our way down, and found a different kind of carnivorous plant along the way.

We made the decision to combine the last day into the second that morning following our sleepless night in cold, leaky, miniscule tents on the unforgiving ground. This meant that after a challenging 7km hike in the morning we still had 17 km in front of us. Thus upon reaching camp we quickly set about packing and eating our breakfast of two bananas and a hard boiled egg each.

The beginning was easy as it once again followed the mountains along the plateau. Our trail was flat, interspersed with streams, beautiful plants with blooming wildflowers, and spectacular views of the mountains that seemed to grow straight out of the ground beside us. We started to gain elevation again as we hiked through an impressive landscape dominated by huge boulders balancing on ridges. We summoned what felt like our last remaining strength and crested the pass, being rewarded with a view of Camp Catta, our hotel for that night should we make it. Eleven km still to go.

We were warned that if there was rain, the descent from the pass could take twice as long as the steep rock becomes dangerous when wet. Thankfully we stayed dry, but lost our cloud cover. At the bottom of the rock descent we arrived at the camp that it had been recommended we stay at. We paused 10 minutes in the shade to refuel, and get a brief reprieve from the blazing sun (mid-thirties?). We eyed our shortening water supply, but knew to keep drinking what we did have. As we continued on, we had officially left the park boundaries, and were committing to doing the hike with only one overnight.

The path became more gentle and our resolve was strengthened when it began to rain. We were now headed down into the Tsarnoro Valley, named for the mountain famed for its 800m cliff face that is popular with BASE jumpers. The valley being outside the national park meant that the hillsides were terraced and tiny villages dotted the valley floor. We could see smoke rising from a chimney along the 'road' in the valley and hoped that was Camp Catta, and the smoke was from something different for each of us, (Craig imagined a Domino's Pizza was being prepared for him) but our guide told us that it was in fact further down the road. 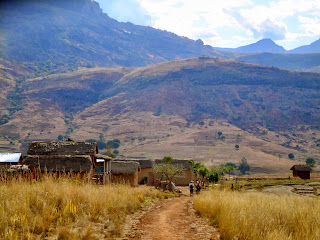 When we eventually reached valley floor, our water supply had run out. Erin and Heather trudged ahead, worried that if they stopped and sat down, they wouldn't be able to get back up. John, our guide, then Craig followed by our four porters brought up the rear. At a fork in the road, Voulahlah caught up with the girls, warning them that we needed to stop and continue on together because there were many forks ahead. We reluctantly sat down to rest and eat a tiny snack while we glanced back nervously at the rolling hills we'd just covered concerned by how far back Craig seemed to be. Craig had taken refuge in the shade and been left a kilometer back by the group as he recognized the signs of heatstroke in himself. His slow pace and frequent stops only made this gap grow. Pretty sure he was on the right road he knew he was going the right way when he found the porters waiting for him to make sure he was doing alright. The porters offered to take Craig's bag but as they were already carrying such heavy loads Craig declined and hiked up the waiting group with them.

Thankfully Heather and John had an extra bottle of water in their big pack that the porter was carrying, and they generously shared it with us giving everyone the strength they needed for the last 20 minutes (30 for Craig and Erin, Erin declared herself a porter and took both her and Craig's bag the rest of the way.)

Fourteen hours after we had started that morning, we at last arrived at Camp Catta with a wind storm swirling dust and rooftops around us, and the occasional hail stone thumping on our heads. Our disappointment showed when we realized the showers at Camp Catta are solar heated, so since we got in after sunset and on a generally cloudy day, there was no hot water to sooth our muscles. We were too sweaty to argue, however, and settled for the cold water that there was.