With an added day in Ramena, we took the opportunity to catch up on entries. Unfortunately the internet was still not working, but we wrote, edited photos, and enjoyed views of the bay. We watched local kids play in the sand - burying the little brother, endlessly filling up plastic bags with water then dumping them in holes they'd dug, waiting impatiently for the tide to go out so they could start a soccer game on the beach, etc. It was a day to recharge ourselves and our electronics. 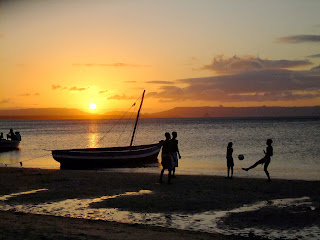 Erin took full advantage of the relaxation opportunities by booking a half-hour massage at sunset for a mere $4.50. Needless to say, she's got another one booked for the next day!

The next day we were optimistic that we would find the Three Bays, mainly because our plan was to take a taxi this time! In an effort to make things easier for Craig's foot, we thought we'd get driven to each bay subquentially, making it a relaxing expedition. Unfortunately, this wasn't possible, because two of the bays were inaccessible by car. So we agreed to get dropped off at the furthest bay, walk to the middle bay, then back to the furthest to get picked back up. In fact, we ended up walking the lengthy 10 Km to the third bay, which was lovely (the Bay of Dunes).

All three were pretty, but underwhelming after our trip to la Mer Emeralde. We were bascially on the open ocean, so the wind was strong and the waves rough. Craig spotted one little sandbar that sort of jutted out into the water at one bay, so we attempted a quick swim. The shape of the bay and rocks around the sandbar made it a point where waves from different directions crashed into each other and zig-zagged across in a weaving pattern. It was interesting and beautiful, but way too rough to actually swim. We were quickly tossed back to shore.

In the end, it was a great workout, and a nice way to end our time in Ramena, feeling like we'd tried out everything there is to do here. Another round of sundowners on the beach and a massage made for a perfect ending to the day!