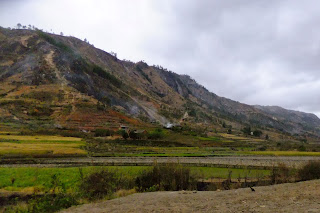 Now that we didn't need an early morning hospital visit, we set about deciding the best way to get south to Ranomafana. Over breakfast we met a couple from Ottawa, the first Canadians we'd seen in Madagascar so far, named Heather and John. It turned out they'd flown in the day before and were headed in the same direction.

Knowing we wouldn't survive the eight plus hours crammed into a taxi-brousse we decided to hire one to take only us. This way we were able to stretch out and didn't have to stop in every little village.

As it was, the ride was long. We had a nice lunch along the way at a pizzeria with a wood-burning oven, but the rest of the day was cold and slow. We rode on, gaining elevation and new scenery as we entered the highlands. Houses were made out of brick and were often two-story, huge rocks protruded from the hills, resembling Scotland, and sweeping views helped to keep us motivated. At long last, well past sundown, we arrived in town.

Our first choice turned out to have recently elevated their prices considerably and we were ushered out the door and on to a more affordable option. They thankfully agreed to serve us dinner even though we were arriving at their 9 pm cut-off. Many steps led up to our private peaked bungalow but it wasn't until morning that we appreciate the great view we had of the river valley. 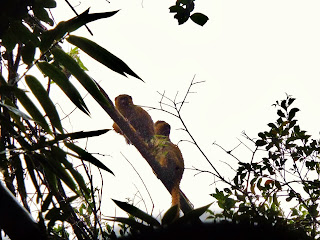 The next day at the park office, we found a guide, Rudy. In the rain, which would be our constant companion for the next two days, he led us through a series of circuits, up and down hills an through the brush in search of lemurs. We disappointingly found our first, the Greater Bamboo Lemur, was nothing more than a motionless brown mass hiding from the rain. Our next sighting, the Golden Bamboo Lemur was moving around and much more interesting. The forest was beautiful and varied; we were often alone, but unlike our time in the North there were large tour groups in Ranomafana. We would come across these groups at each lemur sighting, twenty people all asking each other if they could see it, complaining about their view/the rain, or narrating every move. This certainly detracted from our wildlife experiences in the park. 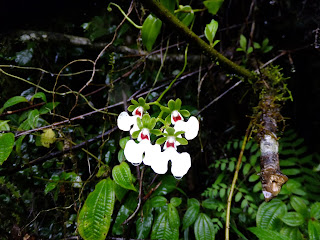 On our way back to the park office we caught a glimpse of a third species-the Red-Fronted Brown lemur. They scurried away through the trees quickly but not before we got a good look and a decent photo.

After a smoking hot shower to warm up, we treated ourselves to a relaxing afternoon and dinner at one of the nicer restaurants in town. Cristo, run by an adorable Malagasy couple, has a huge verandah and sweeping views of the river valley (we got a few minutes of the view when the rain let up momentarily). We enjoyed talking with the owners. The woman designed it, the husband built it, and the daughter serves. 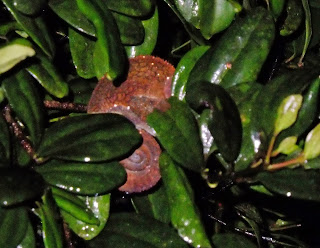 At 5:30, we called up our new friend, the only taxi driver in town, Ritza, to take us back through town and head up the hill to our night hike.

A rainy hour walking up and down the road rewarded us with a few new chameleon species, a frog, and an adorable brown mouse lemur.