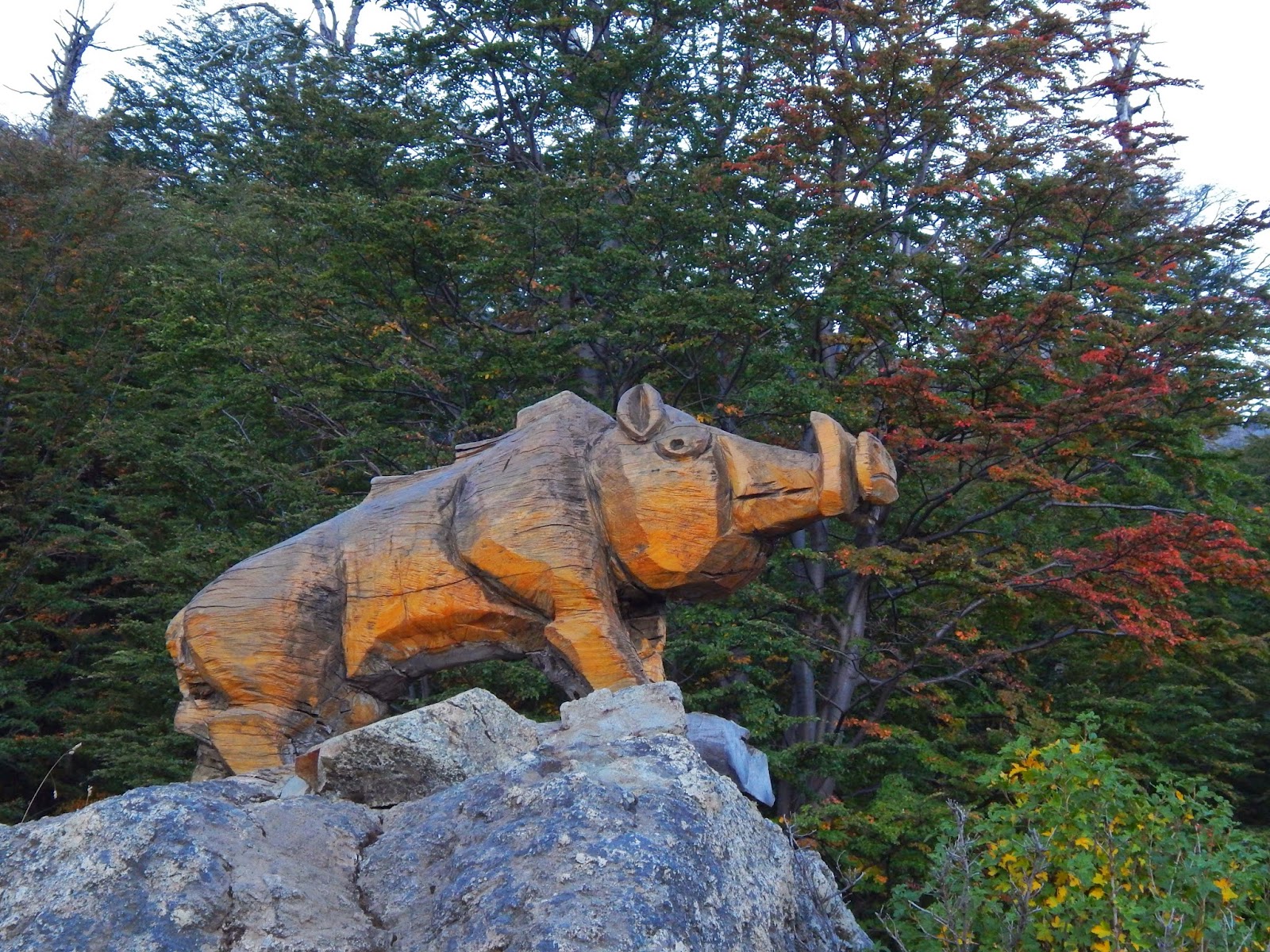 After a day of rest wandering around town, we were ready to get back out and enjoy the last of the beautiful weather. Knowing the hike ahead could be as long as 11 hours, we had hoped for an early start. In the end, we pushed it back to leaving our hostel at 7 am because we couldn't be sure that we'd actually get a taxi any earlier than that. As it was, Craig had to shake awake the staff member sleeping on the hostel couch so we could get out!

Our earliness was quickly rewarded when we arrived at the trailhead in time for the sun rising behind distant peaks onto the valley below. From this height, El Bolson was looking more beautiful, which made us even more excited for the hike ahead. 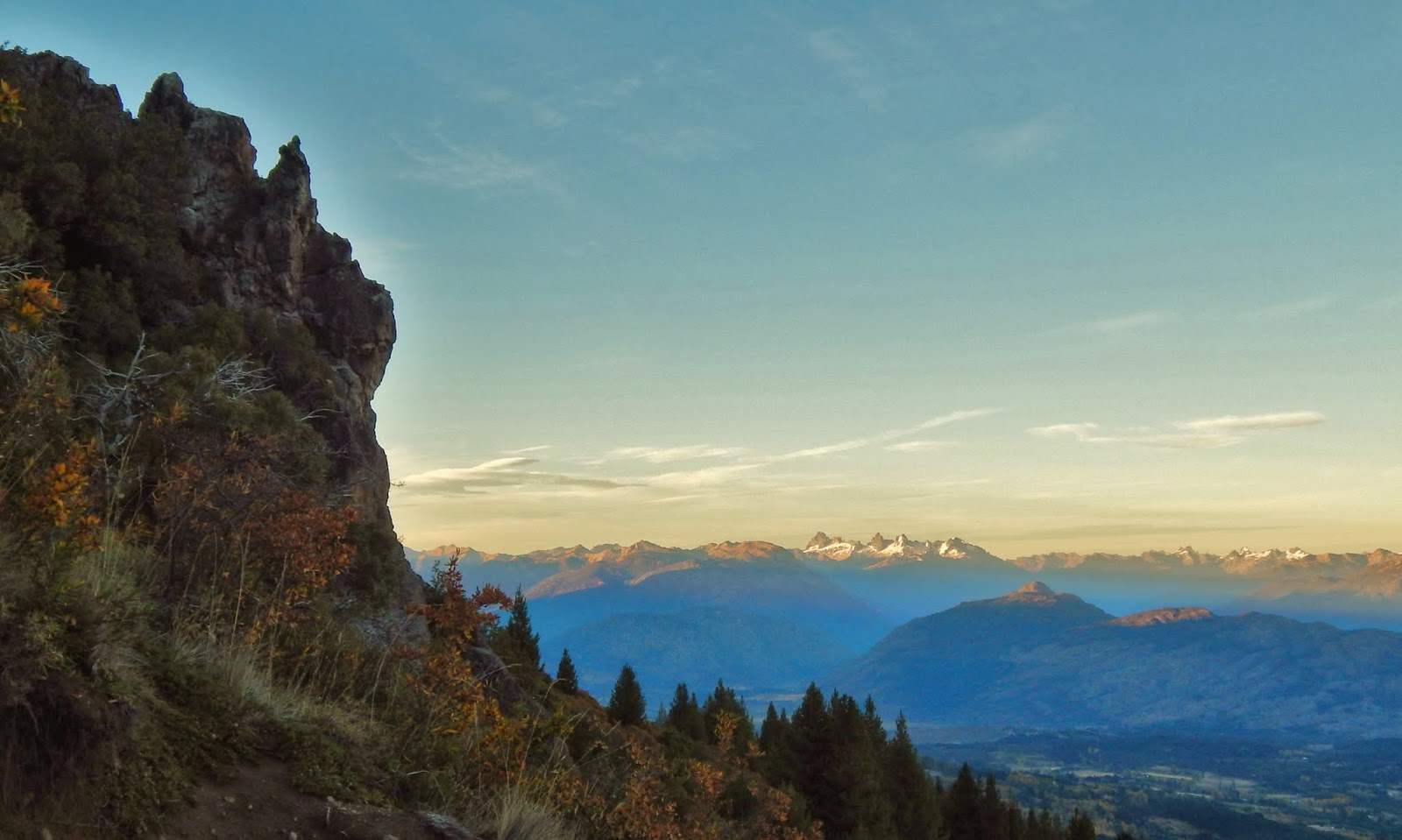 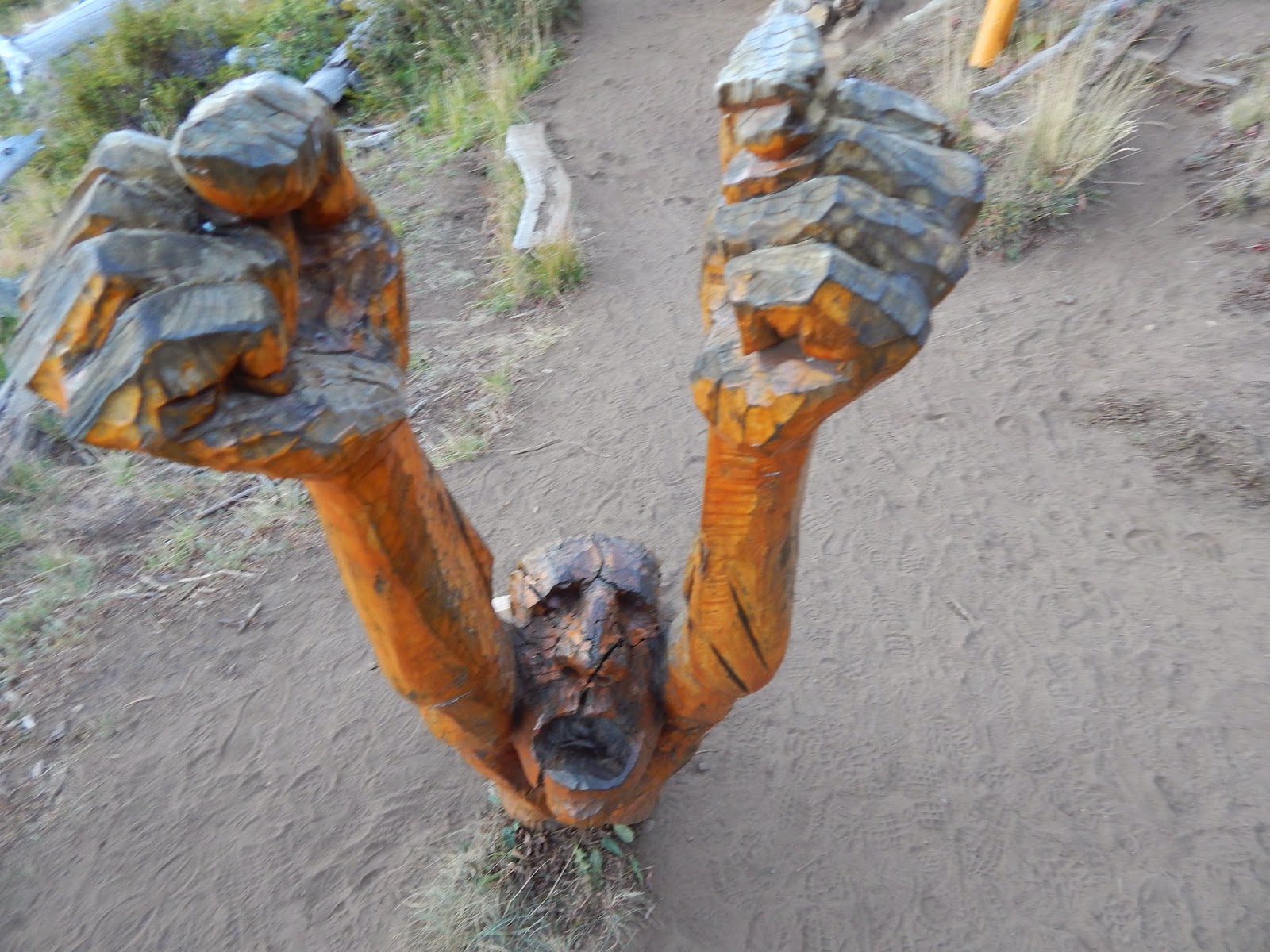 It was a steep climb through the forest to reach our first stop, El Bosque Tallado, where we had the chance to rest our legs while wandering through the 'exhibit.' Artists from all over the continent came to carve dead trees following a forest fire in 1982. The view surrounding the statues, whether the warm forest or the mountain-scape across the valley, was surely better than any art gallery! Add to that to the fact that we hadn't seen or heard anyone else since leaving the taxi, and you can understand its magical allure. 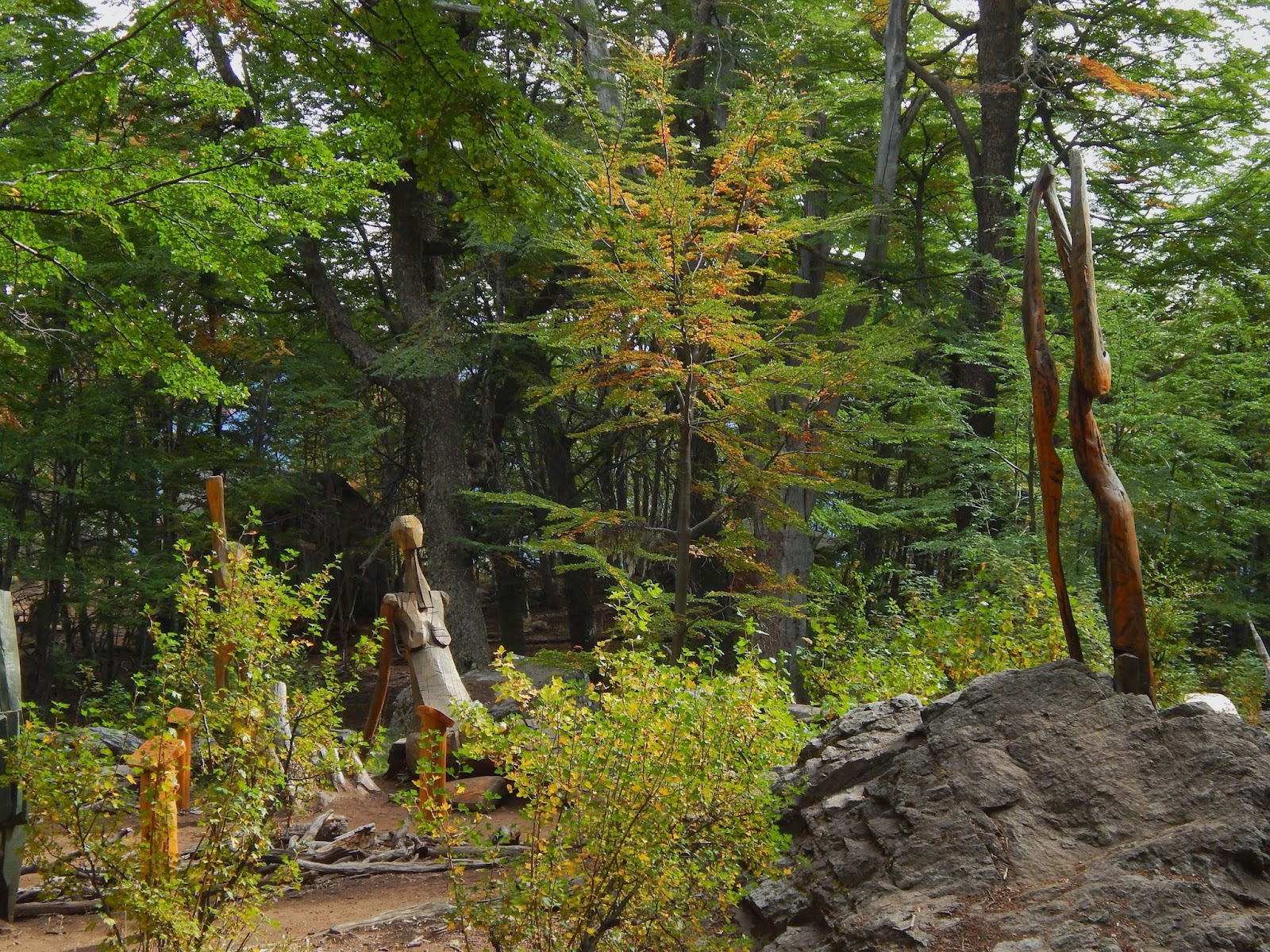 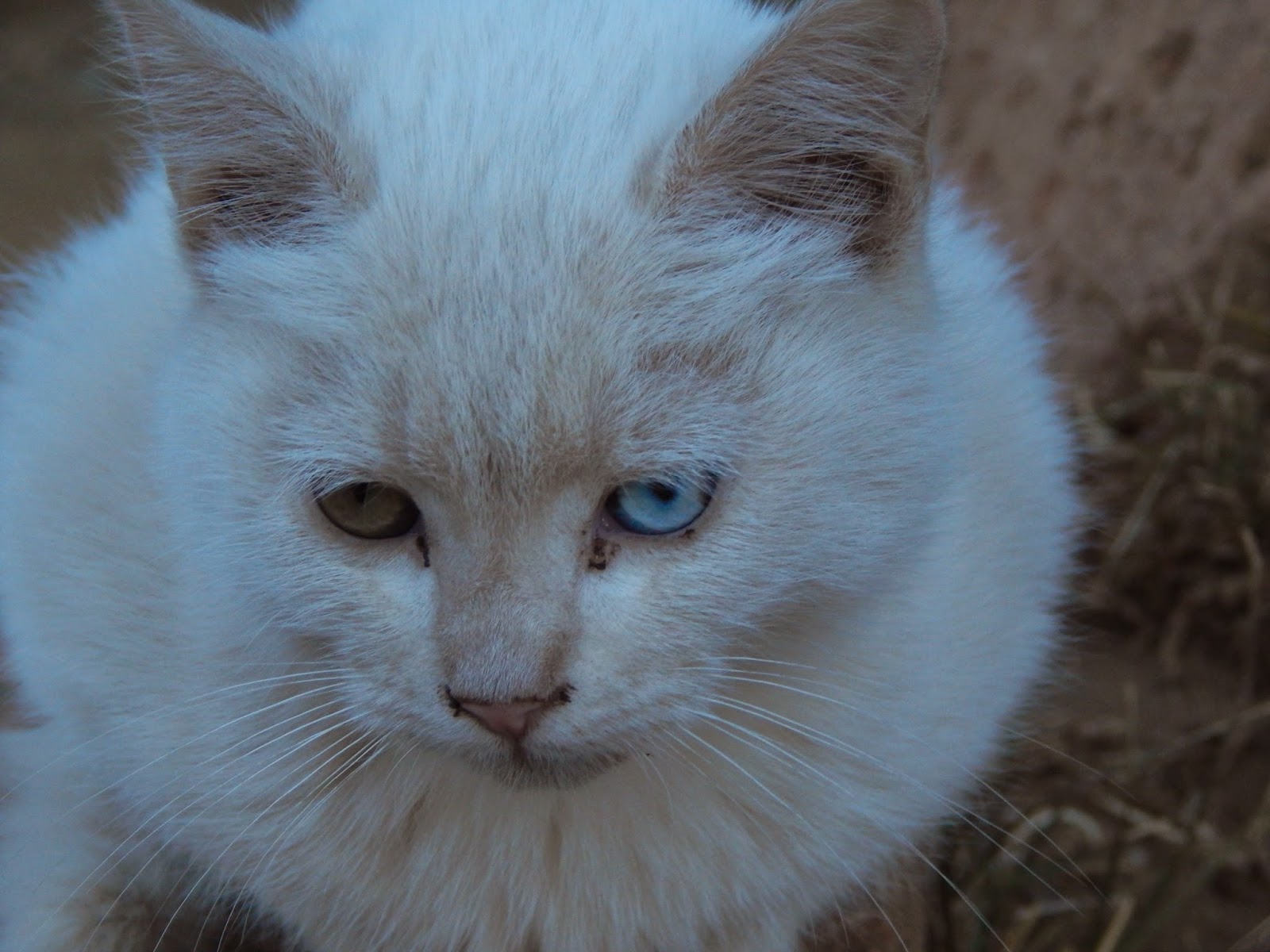 Another leg of steep forest hiking brought us to a cute refugio that looked out over town. Here, we registered to hike further (mandatory), played with some adorably cute kittens, and fuelled up on snacks before pressing on. The registry showed we were the first people in two days to hike onwards towards the peak of Cerro Piltriquitron. 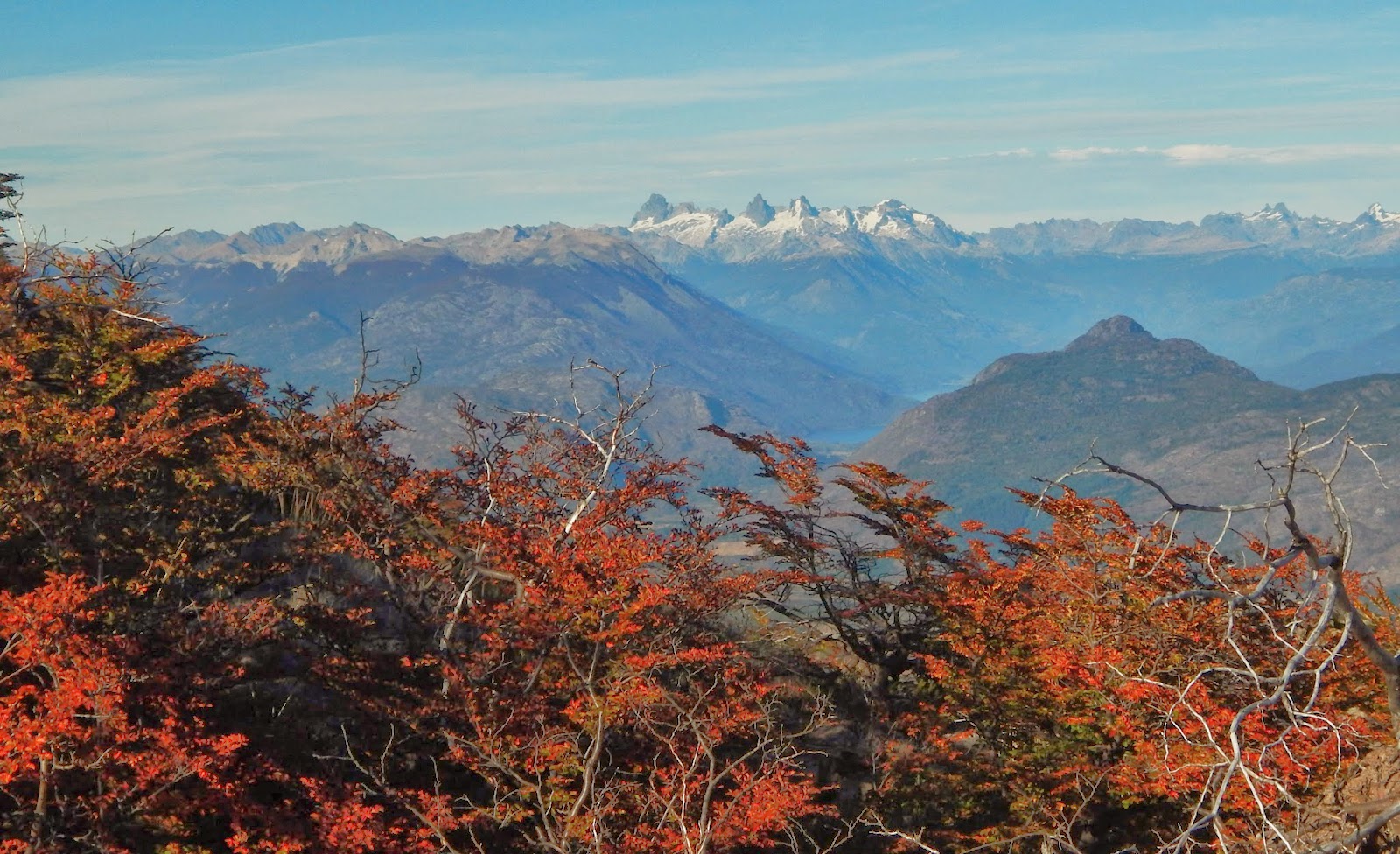 We'd heard and read that the summit was quite challenging: some scrambling would be required on a steep trail, so we weren't all too fussed about going the whole way. We really just wanted views into the valley in behind, which we expected would have some stunning fall colours. So we planned to play it by ear and stop whenever we were satisfied with our climb. 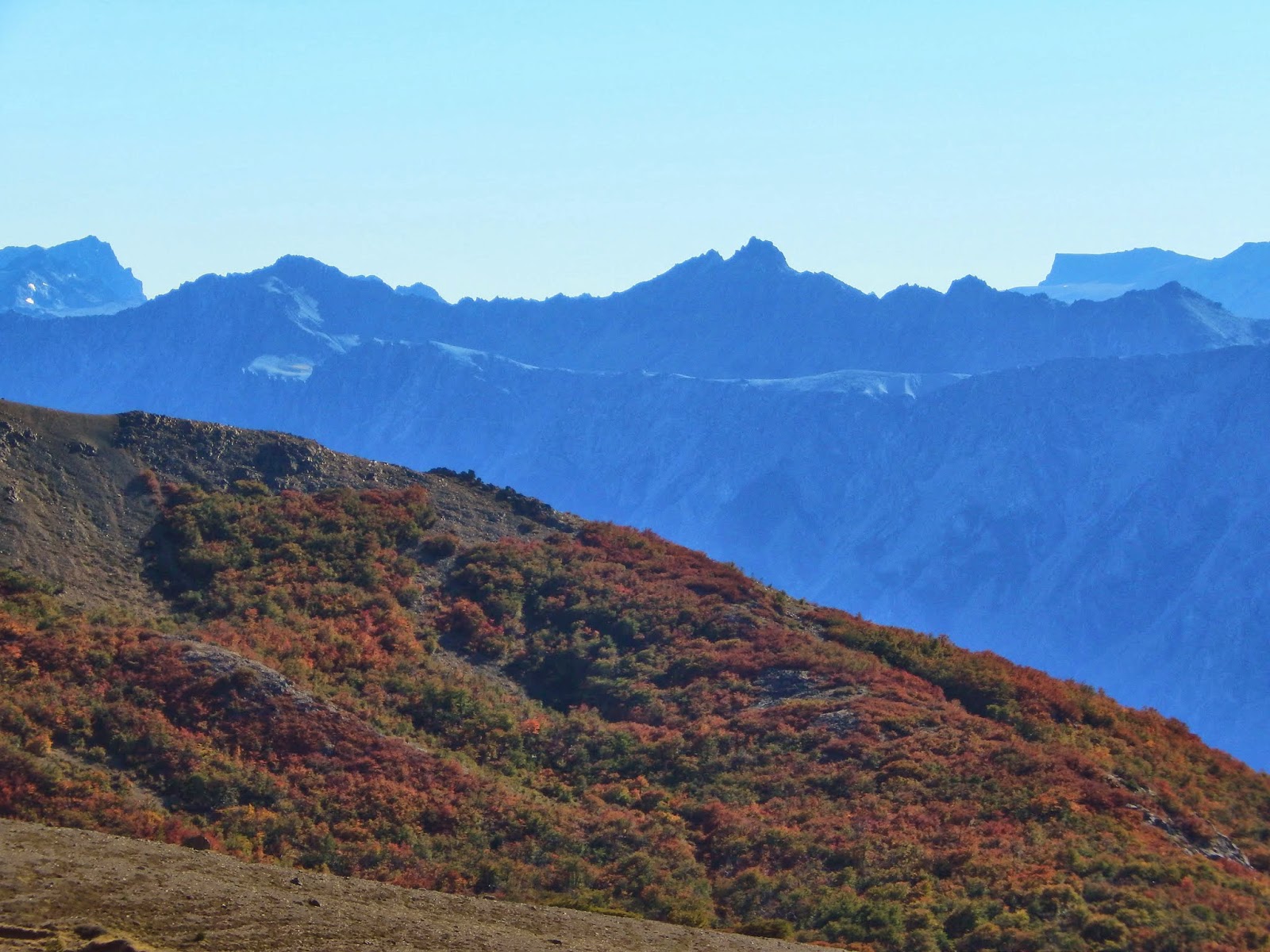 After a 10 min incline, the path levelled-off and we enjoyed a pleasant stroll along a plateau straight towards the back side of the mountain. We could see bits and pieces of red leaves in the morning light and paused a few times to admire the slope. From there, the path took a bend and we were led up, up, up to a series of switchbacks on loose shale rocks. 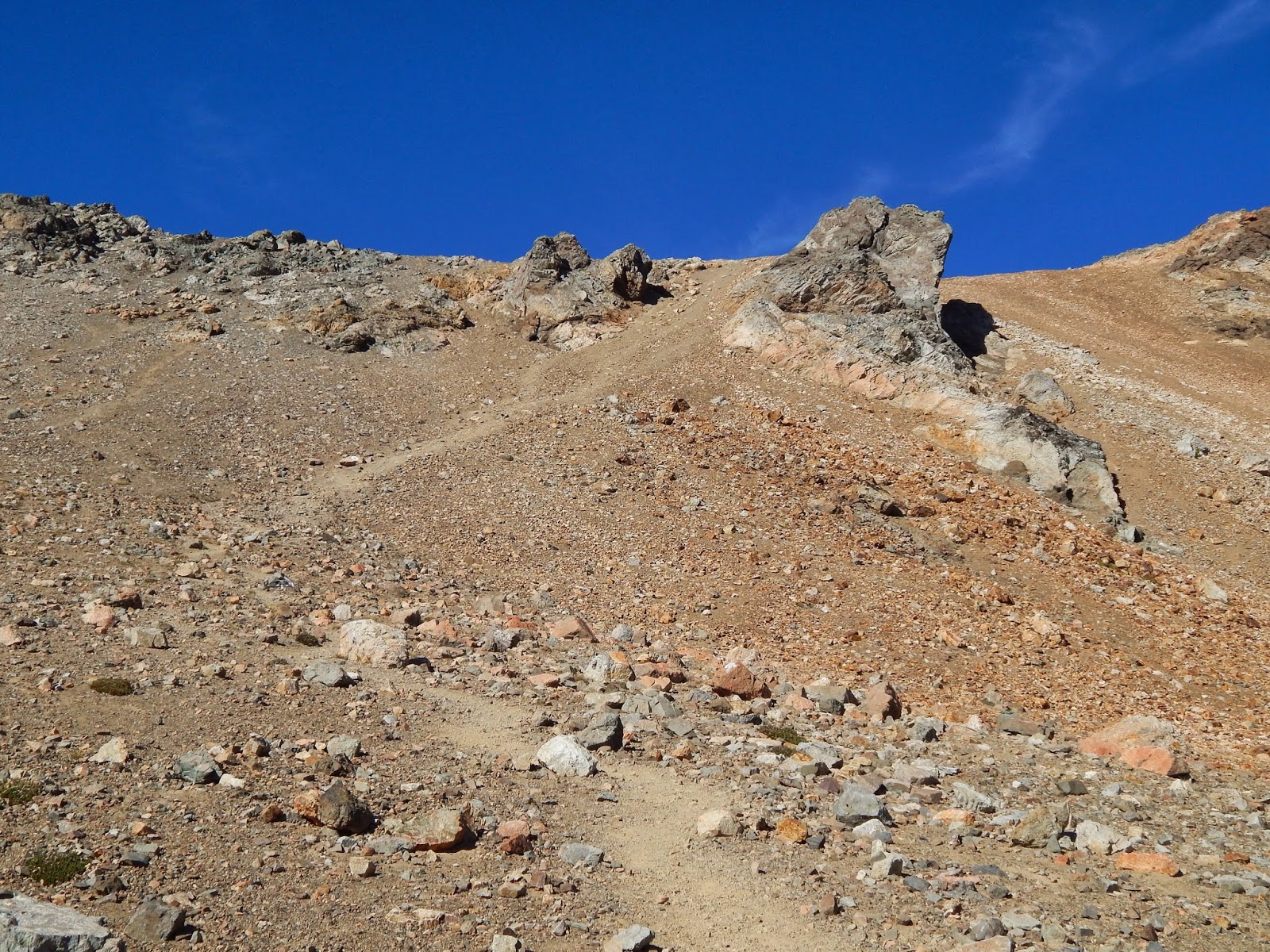 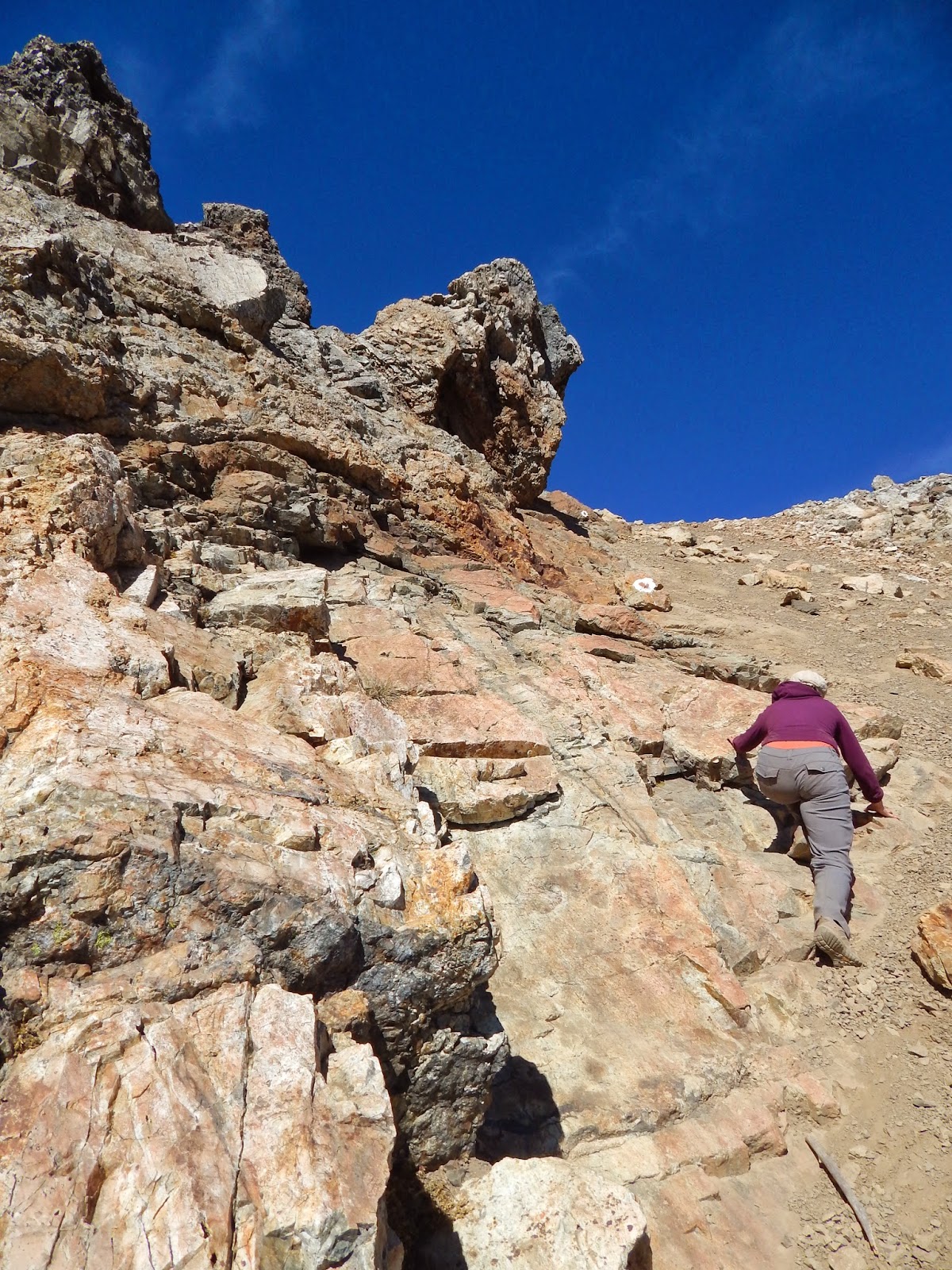 Once we laboured up what appeared to be 1/3 of the way of the difficult part, without gaining a spectacular view, we figured we might as well continue and attempt the intimidating and scary climb to the summit in front of us. The next hour had us scrambling up the slope, clawing at the loose rocks with our hands to avoid sliding back down, then some bouldering as we avoided the 40 degree slope by climbing up or around short stretches on the exposed rocks and cliffs. This was proving to be the most technical climb either of us had done and had Erin reconsidering how poorly in shape she keeps saying we are.

We crested the ridge only to discover that perspective had once again fooled us and the post marking the summit was still a ways away. The trail eased slightly but cliffs moved in from the left and then the right, increasing the feelings of vertigo building within us. We pressed onwards to avoid having to think about the descent. Taking a short break to eat most of our remaining provisions and catch our breath in the thinning air we could see the valley behind in all its coloured glory. 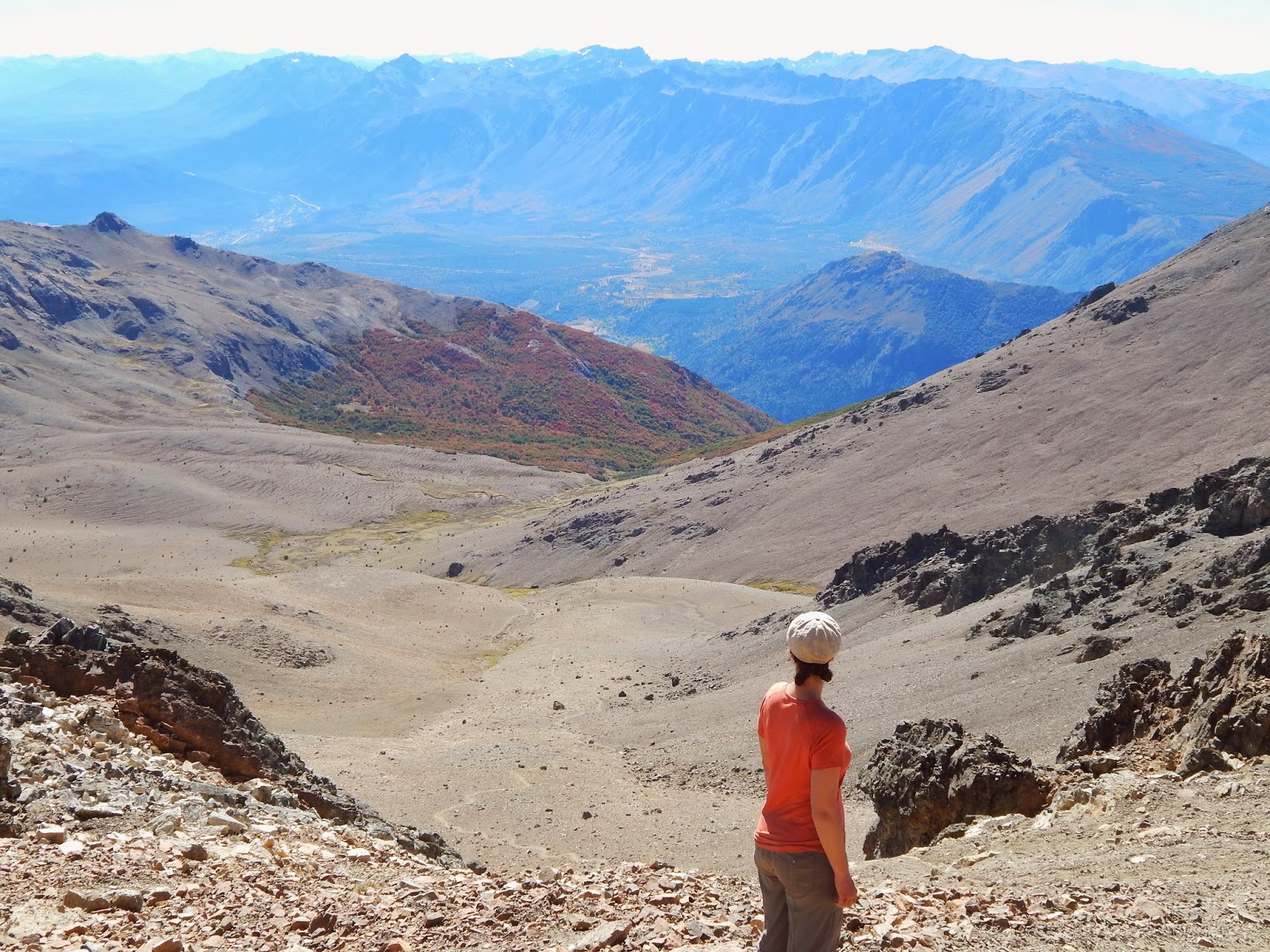 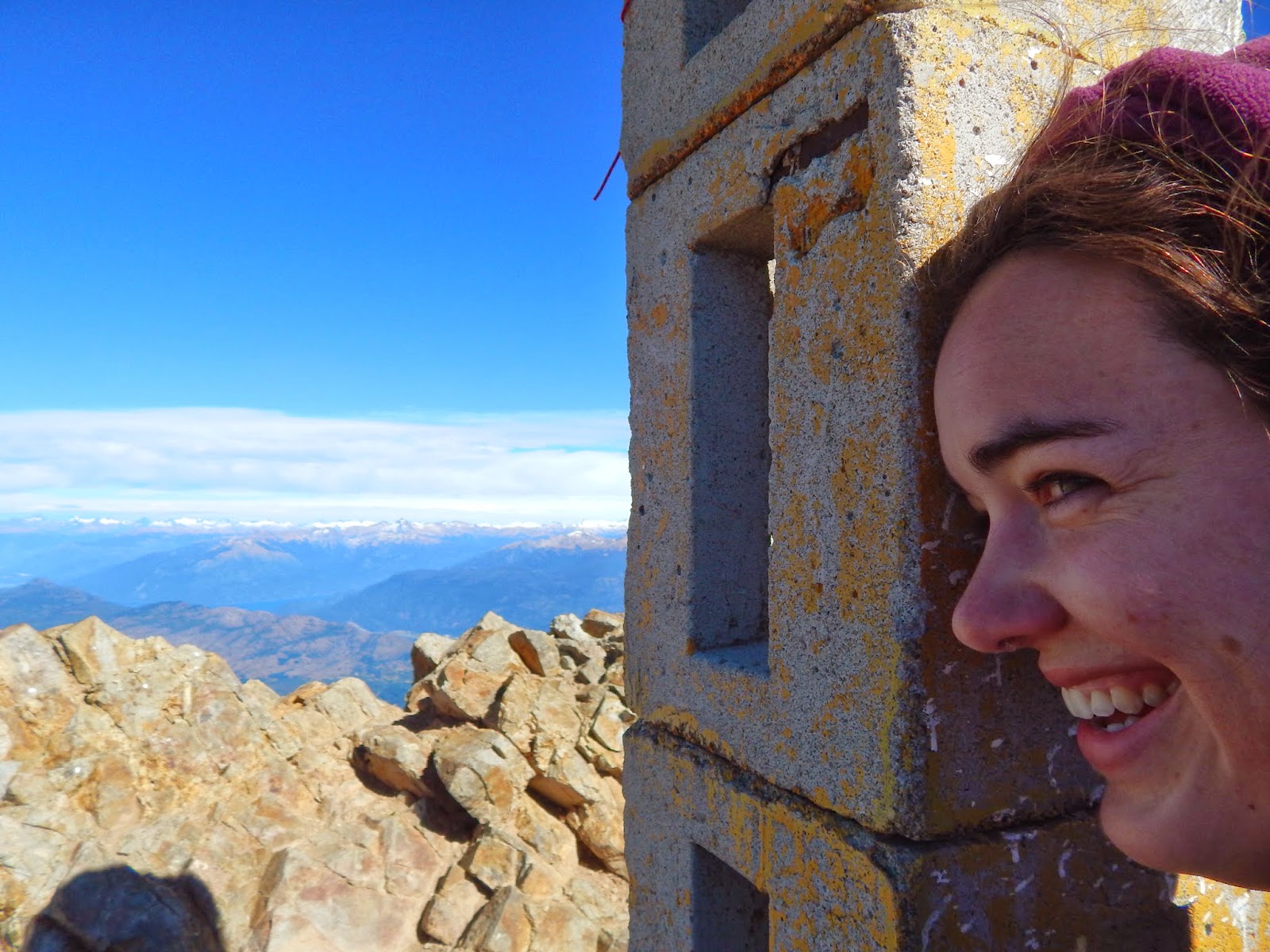 Looking back the way we came. The trail goes over the lip of the ridge and then straight down.
Finally reaching the peak, an area the size of a large kitchen table with drops of hundreds of meters on three sides, we sat against/clung to the post for our brief stop at the top. Neither of us are prone to an intense fear of heights, but we felt quite uneasy. The uneasiness might have been enough to limit our time at the top but not our enjoyment. We were alone atop the highest peak in the area. Our view stretched out over many valleys, lakes, the jagged peaks below us, a snowcapped volcano, and hidden forested valleys changing to bright reds. 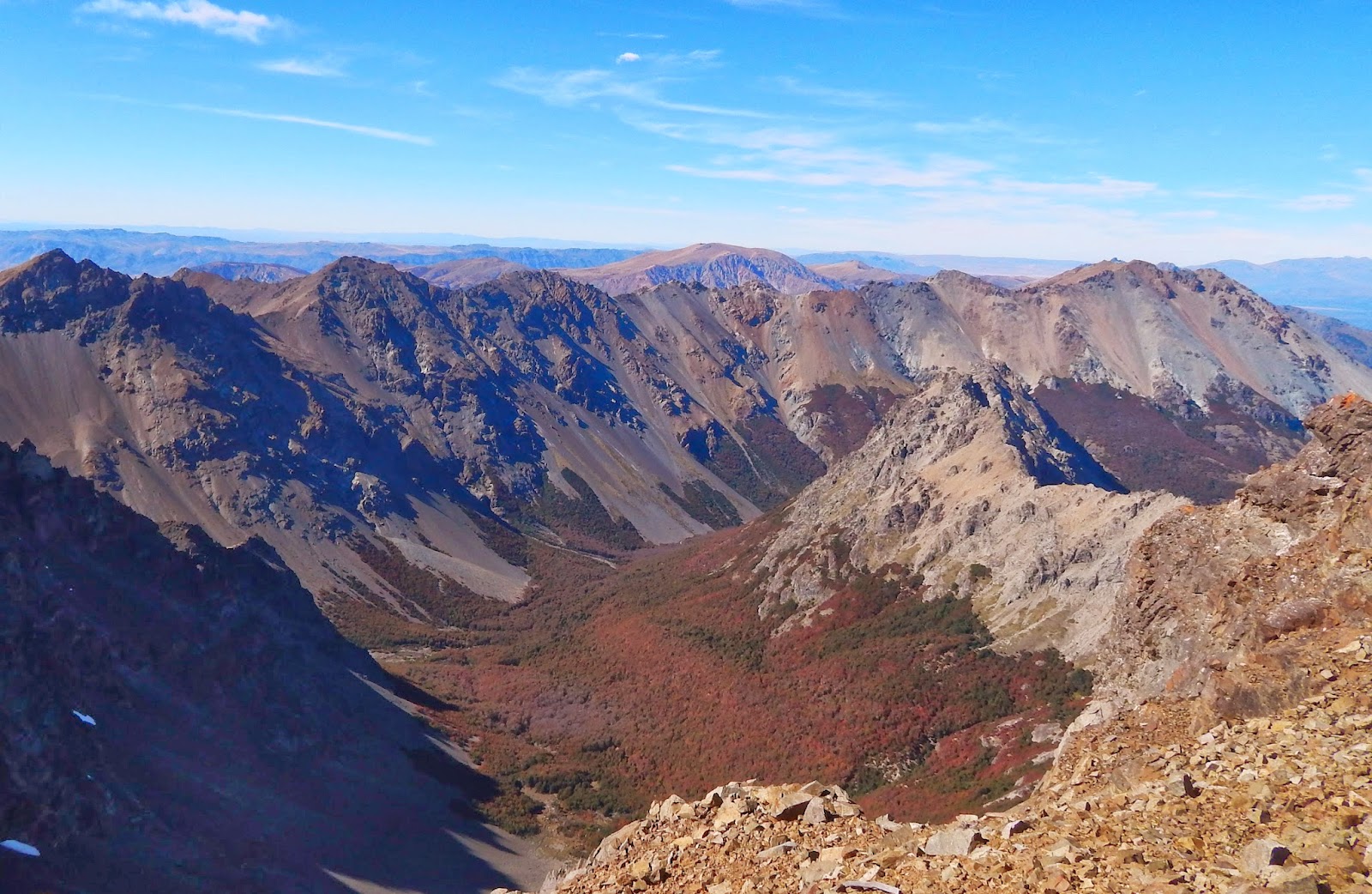 For the return journey, we opted for the 'skiing' approach. We squatted and planted our feet, then using either our hands or rocks in our grips as breaks, we slid down the slope of loose rock and sand. Part way down, while Craig was passing a camera to Erin, the other camera (our new one) slid from his lap and landed relatively harmlessly on some sand. Unable to reach for it as he was leaning back to both not tumble down the hill himself and pass the other camera, he could only watch as it slowly rolled over and then tumbled 40 meters down the hill crashing into rock after rock. Yelling at it to stop finally worked and Craig quickly slid down to its resting place. The lens cap had stayed on and we were relieved to discover that it still worked! 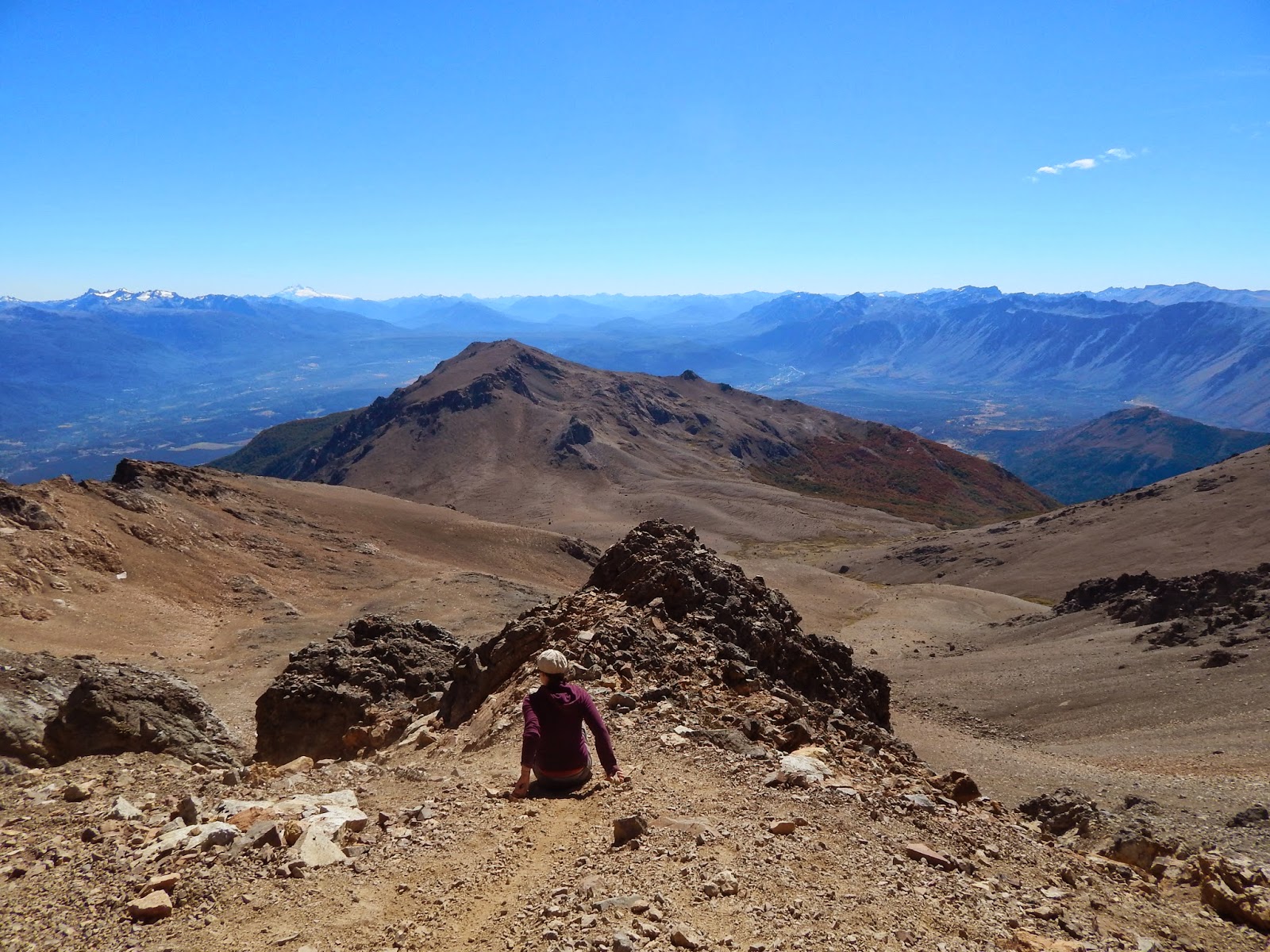 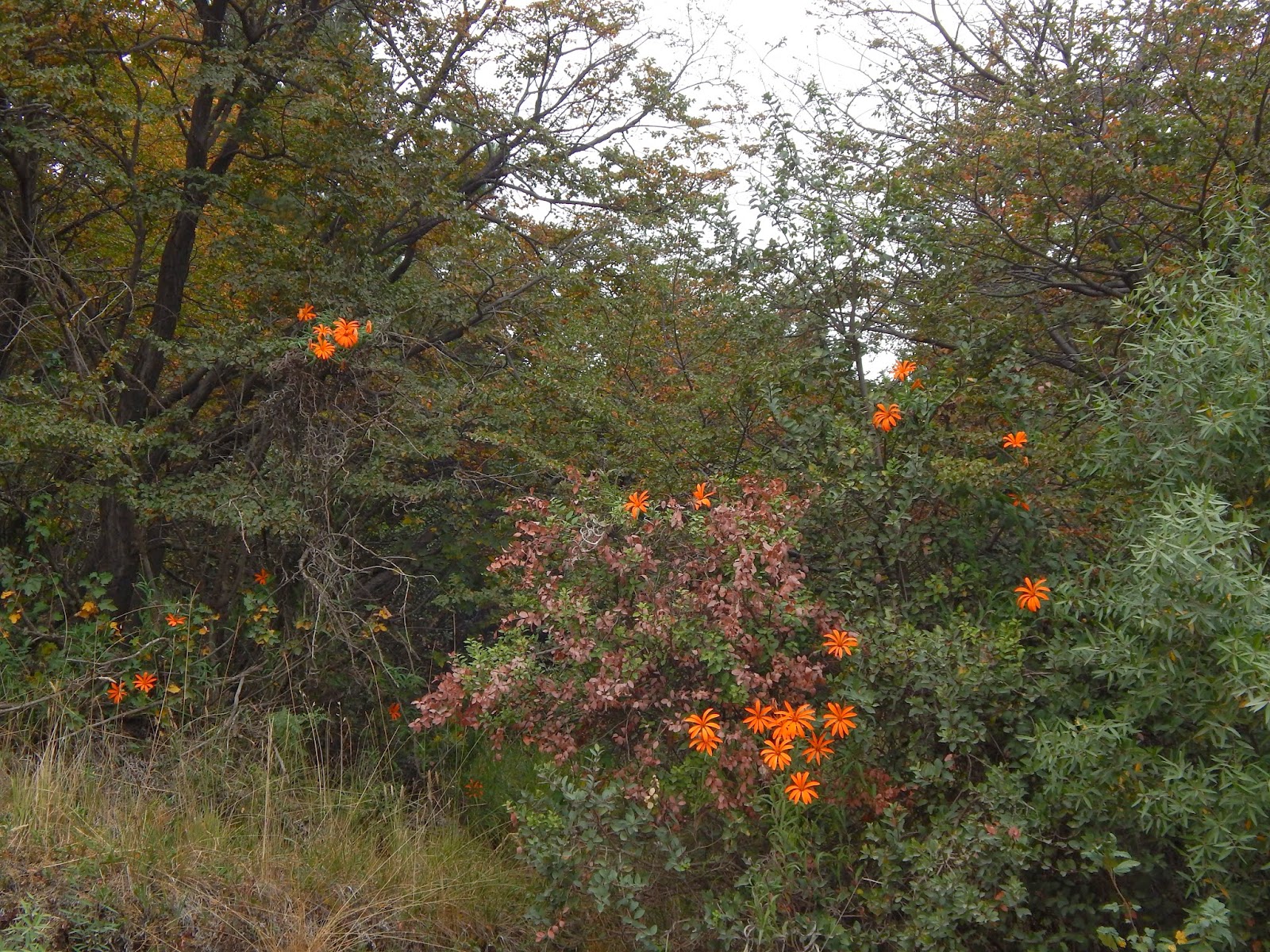 The seats of our pants are a little worse for wear, but we had made it down safely from the most challenging summit either of us have ever attempted. Once we were on an incline flat enough for us to walk again, we made quick work of returning to the parking lot. A few cars sat idle, but no one was in sight to negotiate passage back to town. Thus, with every leg muscle crying out with each step, and our feet, toes, and hands torn up by the rocks (Erin had even put a hole in her shoe), we started the 13 km hike back to town.

We were elated when after 1 hour, a truck stopped and let us hop into the back for the rest of the journey. After an early dinner and a celebratory beer, we were thankfully able to stand back up and return to the hostel.

It should be no surprise that for our last day in El Bolson, we rested, booked our journey onwards, and Erin walked out to get a massage. Our only regret was not having our camera with us to capture the most vivid, crisp, and clear rainbow we had ever scene, stretching across the ridge we'd just summited the day before. 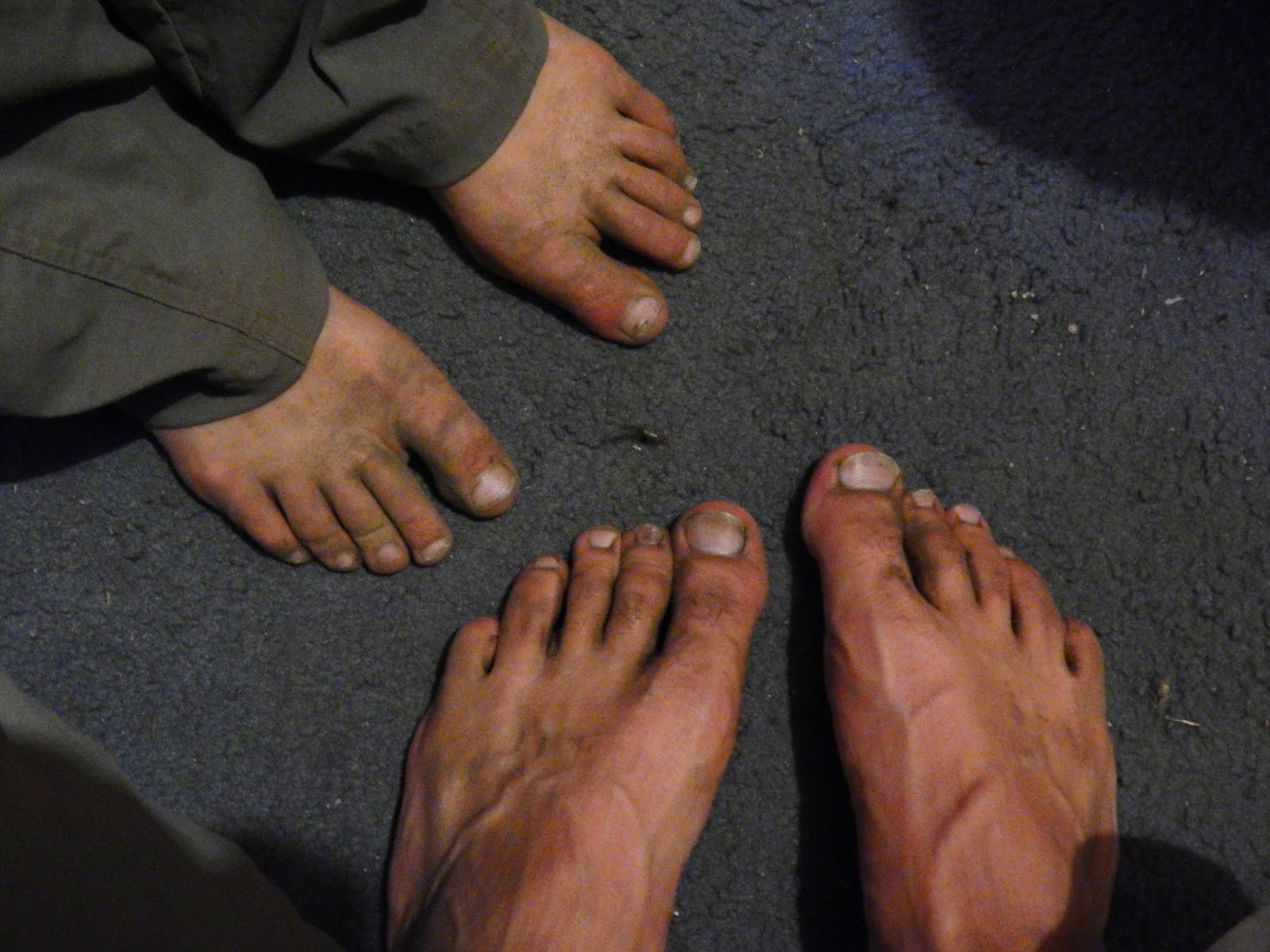